Images that will rock your world! The jaw-dropping winning entries in a prestigious mountaineering photo contest revealed

The best entries to an annual mountaineering photography contest have been revealed – and they’ll take your breath away.

The CVCEPhoto competition – organised by the Spanish Club Vasco de Camping Elkartea (CVCE) mountaineering club to ‘promote mountain activity’ – received almost 1,000 entries from 58 countries, with a Polish photographer declared the winner for a striking image of a climber tackling a vertical rock face in the Czech Republic.

The judges had their work cut out, though – the standard of the images vying for prizes was dizzyingly good.

They included a vertigo-inducing photo of a climber hauling himself up a 656ft-deep crevasse in France, gravity-defying rock climbers in Australia and a daredevil ascending a rock face called Maelstrom Wall. Which certainly lives up to its name.

The winning and commended images will be exhibited in the CVCE club’s San Sebastian showroom until July 31. And they can all be seen here, just by scrolling down… 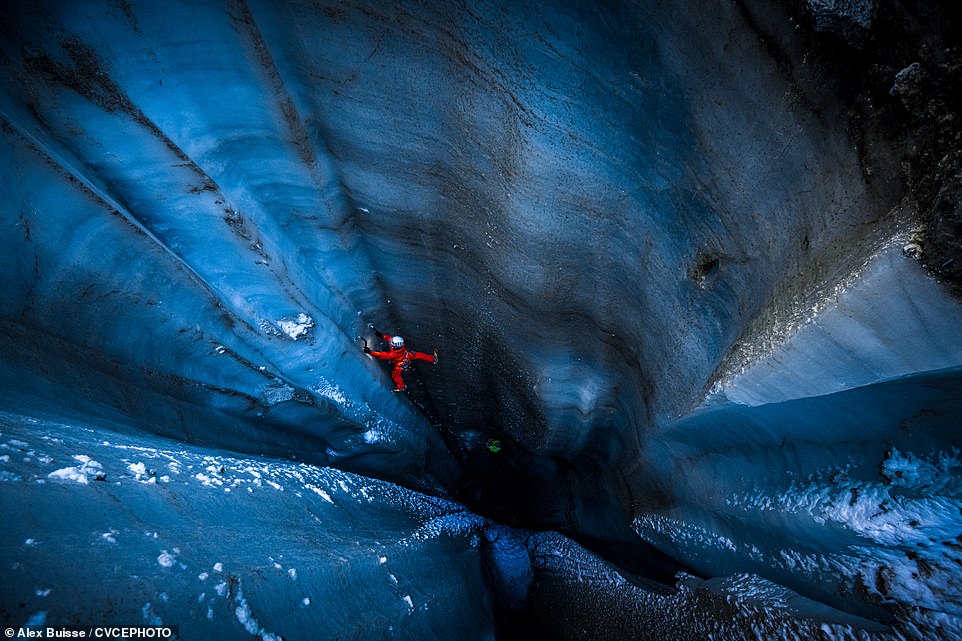 This vertigo-inducing shot was taken by Frenchman Alex Buisse, who received the accolade of second prize in the CVCEPhoto contest. It shows Jeff Mercier climbing out of a moulin (a deep crevasse formed by summer meltwater) inside France’s Mer de Glace glacier last October. Chamonix.net notes that the Mer de Glace, which means ‘Sea of Ice’ in French, is the largest glacier in France, measuring 4.3miles (7km) long and 656ft (200m) deep 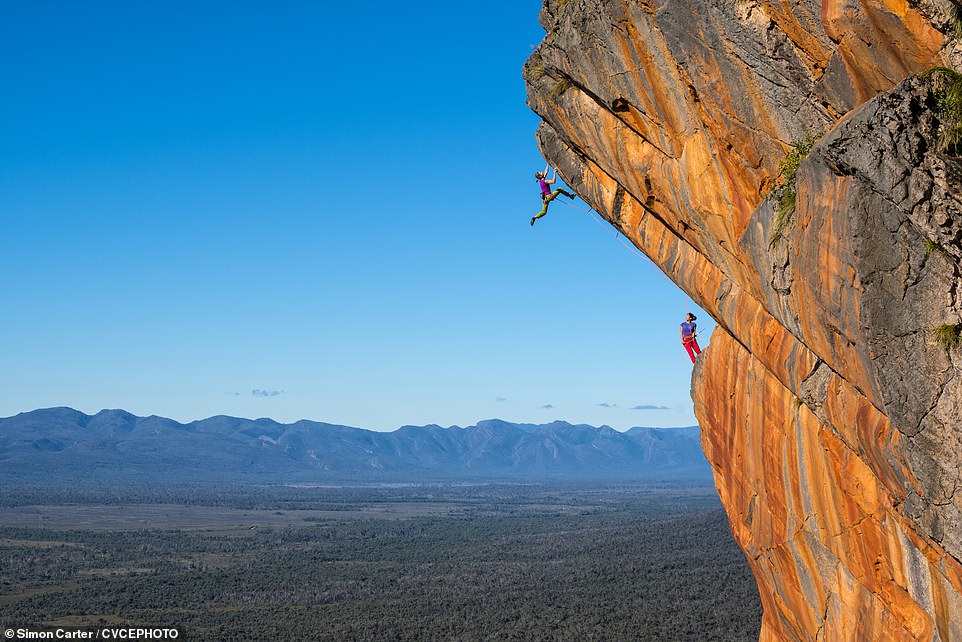 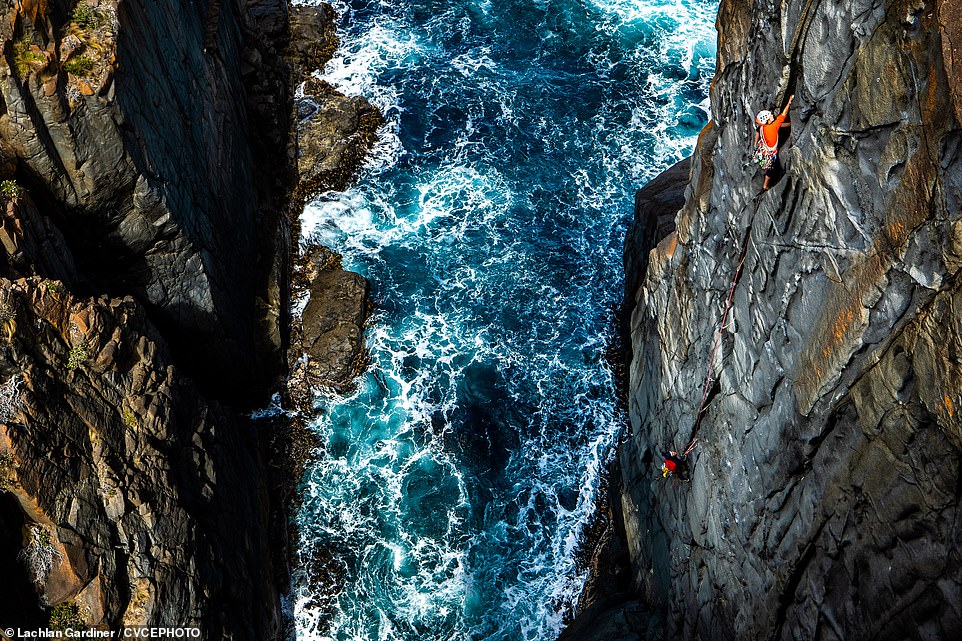 This extraordinary shot, which received an honourable mention, is the work of Australian photographer Lachlan Gardiner. It captures Charlotte Blake climbing the definitely-not-for-the-fainted-hearted Maelstrom Wall on Bruny Island off the coast of Tasmania, with strong currents swirling below 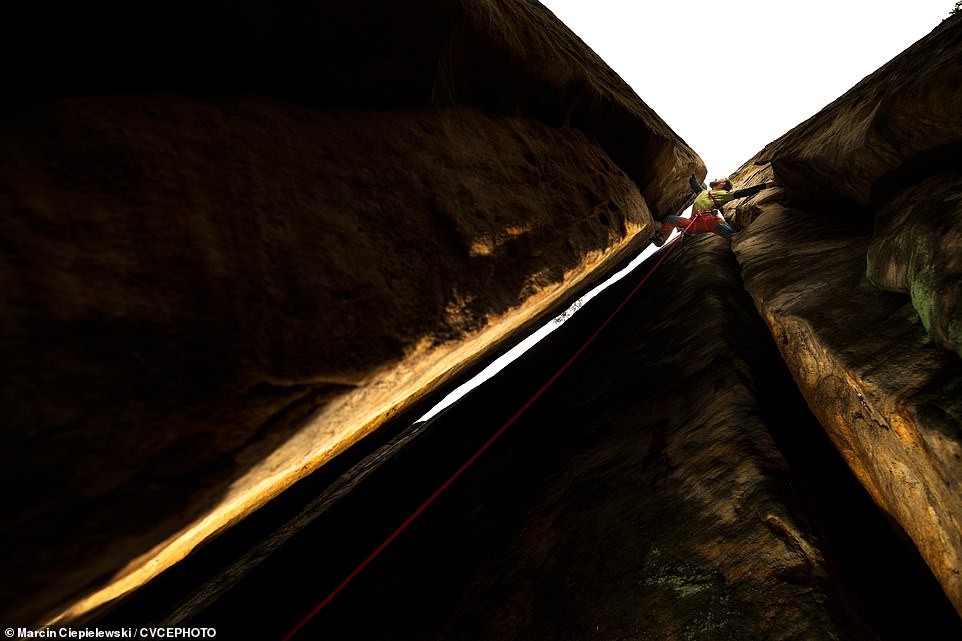 X marks the spot for a great photo: Polish photographer Marcin Ciepielewski took this picture in the Adrspach-Teplice Rocks nature reserve in the Czech Republic. The judges were impressed enough to crown it the overall winning image. Ciepielewski said: ‘I was fascinated with the geometrical shapes of the great chimney Vrani veze crag in Adrspach, an incredible place full of huge peaks and edges. My idea was to balance the available light with a flashlight to [illuminate] the dark shadows of the chimney. I wanted to create a ray of light on the edge of rock and connect all the lines – rock edges and ray[s] of light [to form the letter] X with the climber – my friend Pawet Zielinski – in the centre of the composition.’ And the name of the photo? ‘The X’ 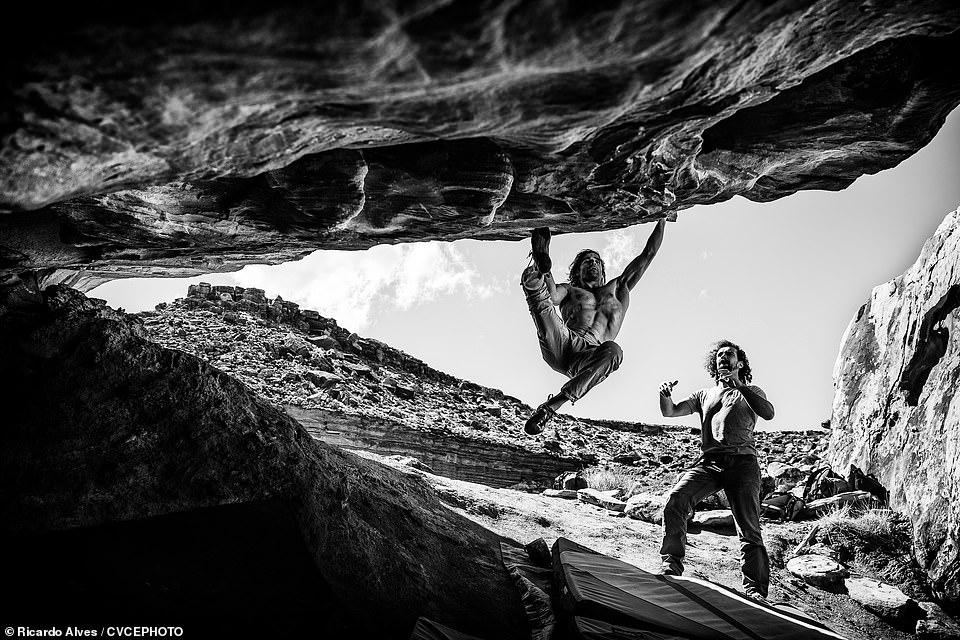 Ricardo Alves from Lisbon, Portugal, took this striking black-and-white shot – for which he received an honourable mention – in Moe’s Valley in southwest Utah, an area that he describes as a ‘bouldering paradise’. It shows climber Nuno Monteiro on a route referred to as the Pink Lady. Alves said of the image: ‘I took this photo on March 21, a few days before the coronavirus pandemic shutdown all the flights between [the] US and Europe, making the journey home an adventure’ 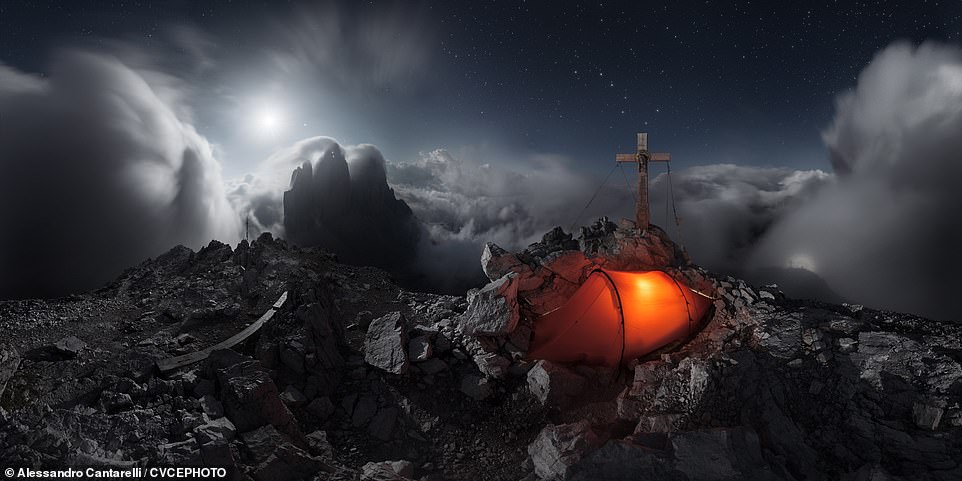 The photographer behind this mesmerising image of the distinctive Tre Cime di Lavaredo rock formation in the Dolomites region of northeastern Italy is Alessandro Cantarelli. The Italian photographer explained that it was taken after summiting Monte Paterno, with the resulting 360-degree panorama created by stitching 18 individual images together. Cantarelli’s efforts paid off and he took home bronze 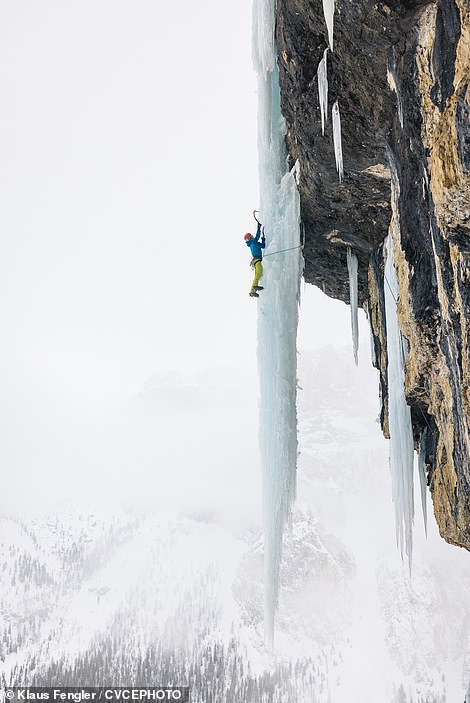 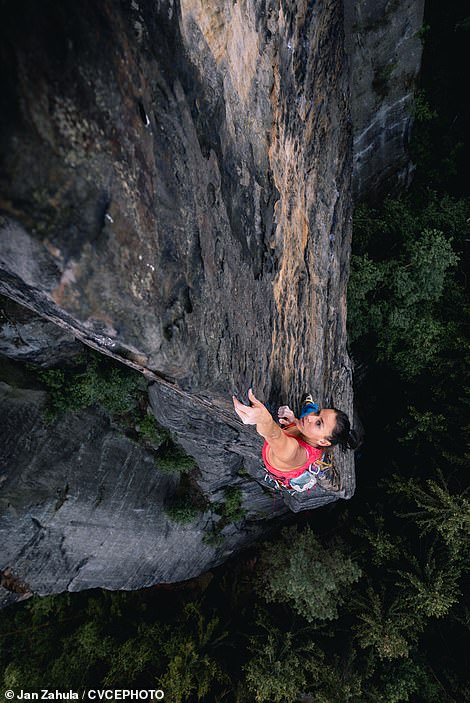 LEFT: German photographer Klaus Fengler captured climber Luka Lindic ascending a spectacular formation he refers to as the Magic Flute in Vallunga in Italy’s Dolomites region. The photo was given an honourable mention. RIGHT: Czech photographer Jan Zahula accompanied climber Jenny Fischer to catch her in action on a route known as the Gilotina in Labske Udoli, which is located on the Czech side of the Elbe Valley. The photo saw Zahula claim the BBK Mendi Film Bilbao-Bizkaia prize 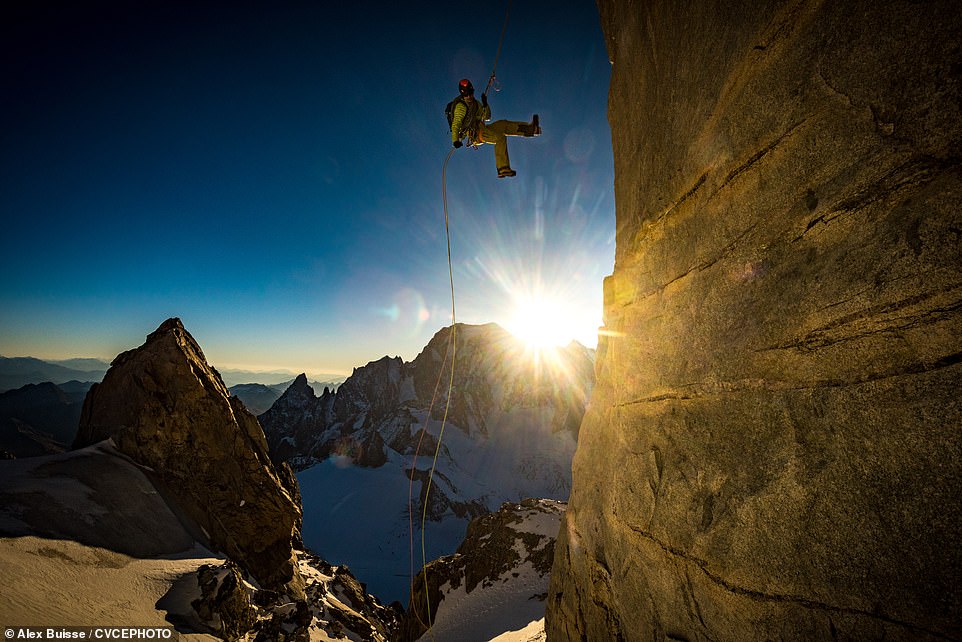 Above is another jaw-dropping photograph from Alex Buisse, this time of Vivian Bruchez abseiling down Dent du Geant, which is a popular peak among mountaineers located between France and Italy in the Alps. The sun can be seen setting over the summit of Mont Blanc in the background. The picture was given an honourable mention 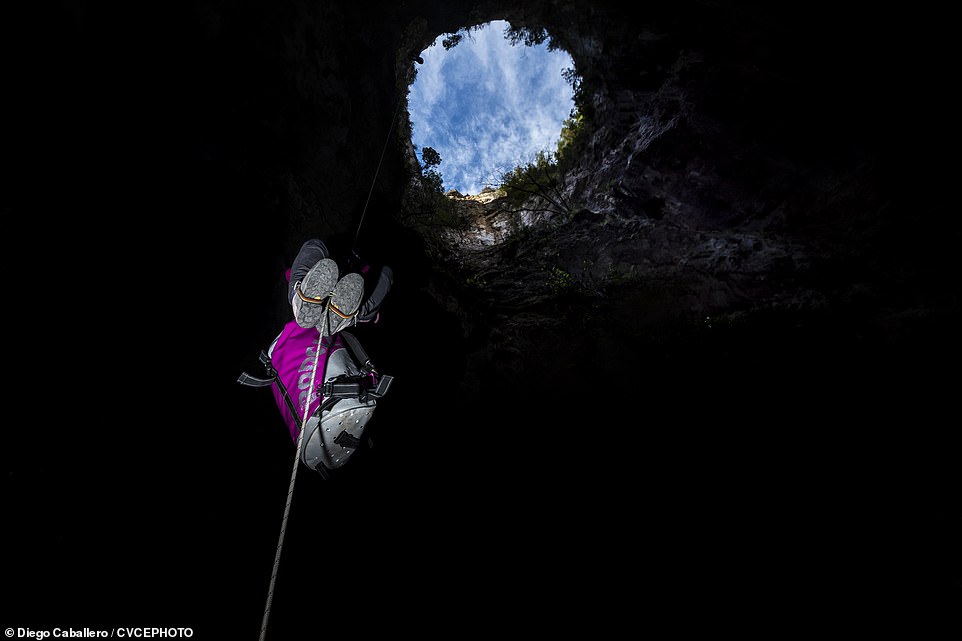 This eerie photo, given an honourable mention, shows a caver heading for the exit in the Avenc Ample chasm in La Vall d’Ebo in Valencia, Spain. The man behind the image, Spanish photographer Diego Caballero, said he tried to give prominence to the feet of his subject to create a sense of depth 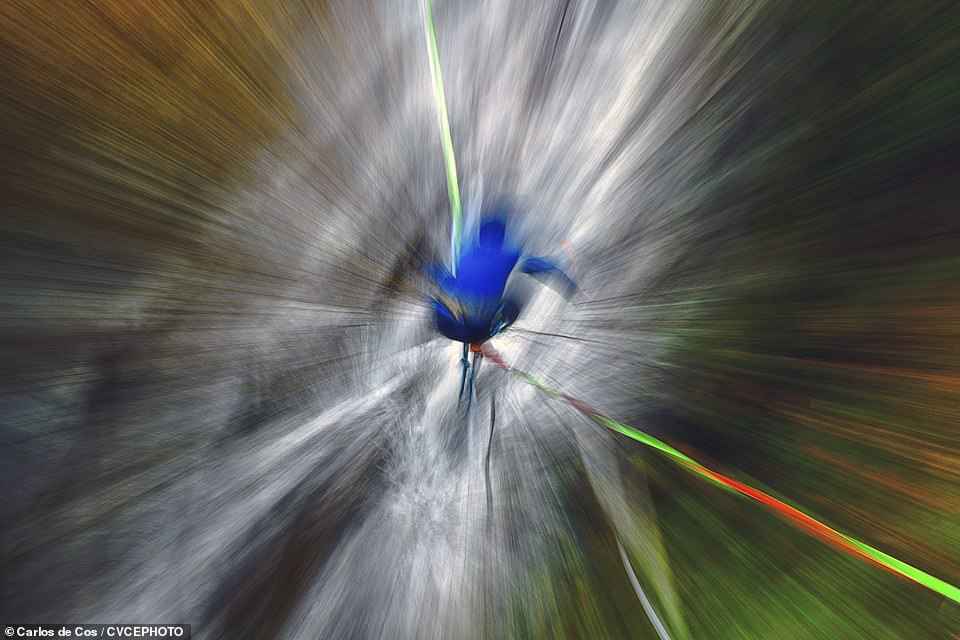 In this motion shot, taken by Spaniard Carlos de Cos, a slackliner is captured navigating the Sagar Erreka waterfall outside the town of Soraluze in the Basque region of Spain. De Cos said he titled the honourable-mention shot Slak Herria after the name of the slackline group, which is constantly ‘looking for locations to cast their lines’ 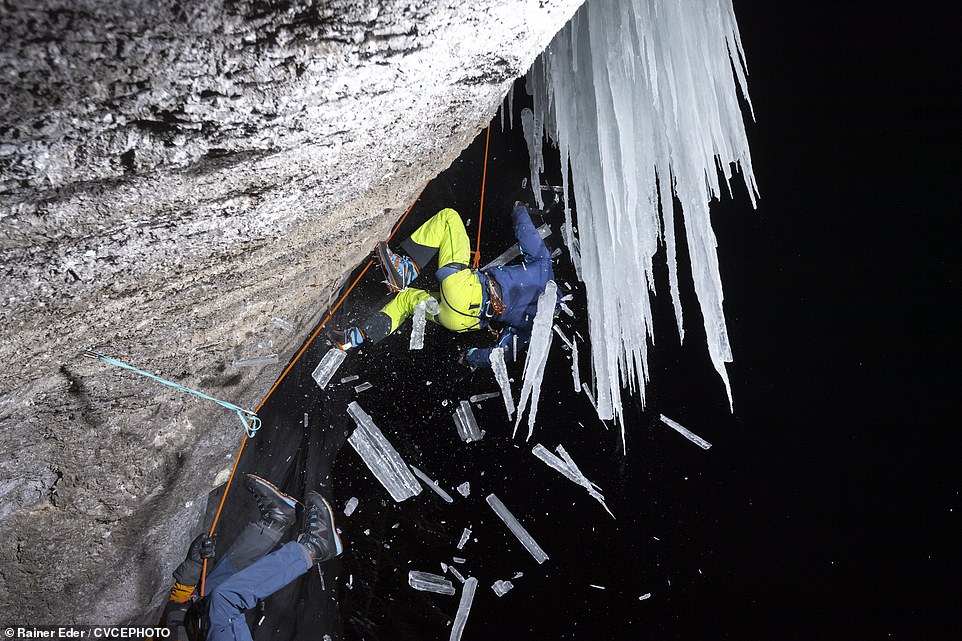 Rainer Eder took this dramatic shot in his home country of Austria and was given an honourable mention for his troubles. He explained that no ice-climbers were injured in the process: ‘The photo was taken at night at -14C. I wanted to show what happens if an ice climber hits the ice when falling on the rope. It is not easy, because you don’t want the climber to get injured and you have only one try’ 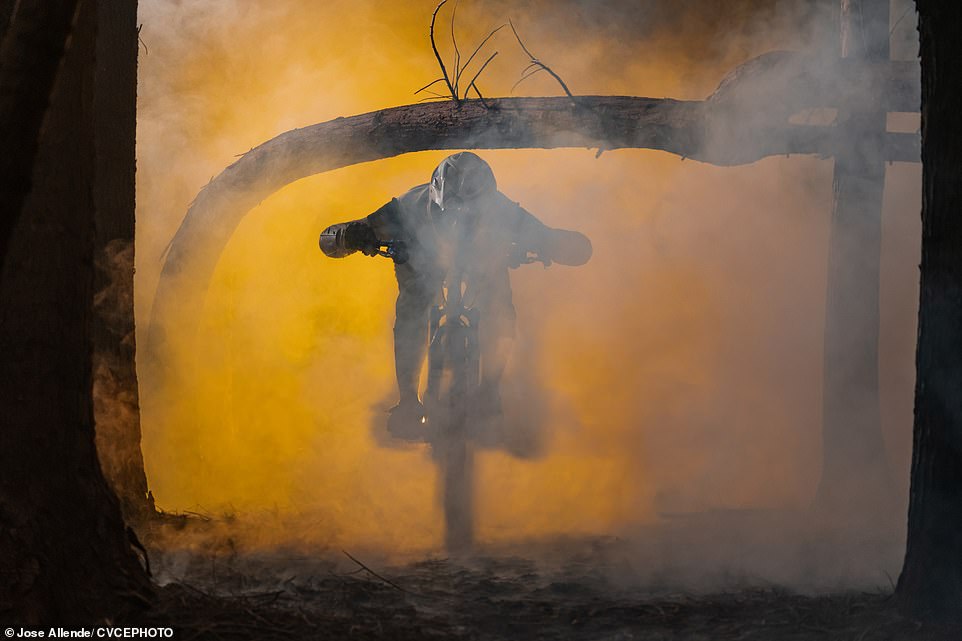 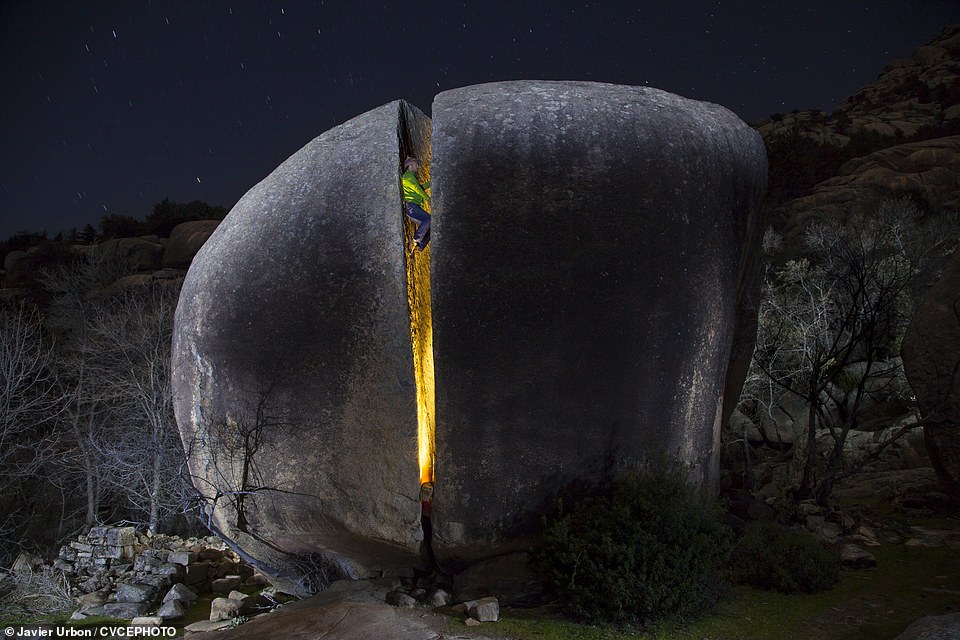 This fascinating image by Spaniard Javier Urbon made the honourable-mention list and shows a climber navigating a crack in a unique giant boulder in the Sierra de Guadarrama National Park, located in the Spanish provinces of Madrid and Segovia. Urbon described the park as a ‘magical place’ peppered with ‘unlikely rock formations’ 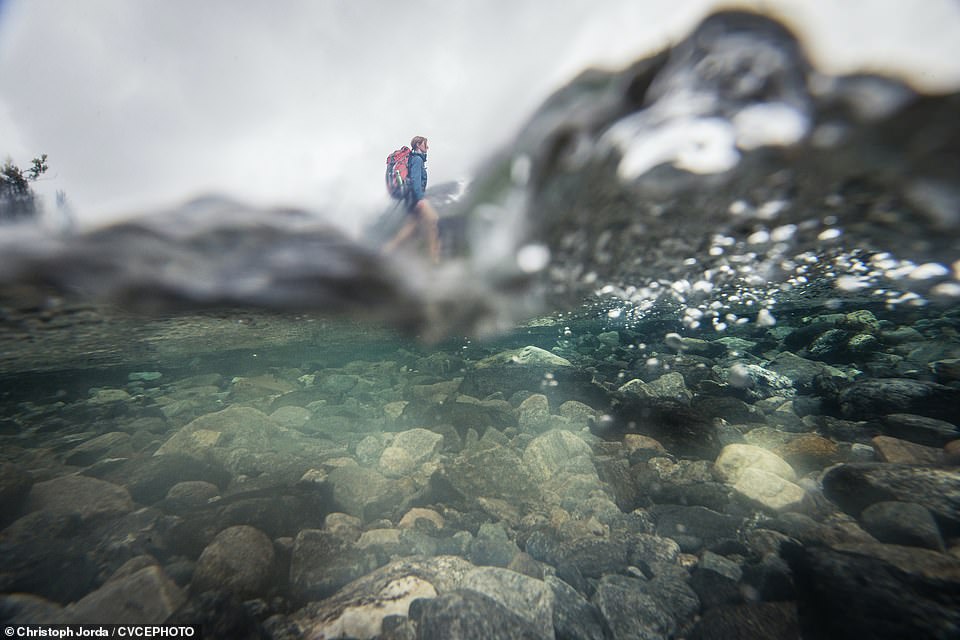 Christoph Jorda, from Germany, titled this split-level honourable-mention shot Waterworld. He revealed: ‘The photo was taken in this magical place at the Tafjord Mountain Range, close to the Reindalseter Cabin [in] Norway. The cabin is located at a small lake with crystal clear water right where four valleys come together. We were on a five-day hike from hut to hut. I wanted to show the clear water and photograph the hike from a different and more creative angle – that’s why I brought my quite heavy underwater housing on the hike. It seems it was worth it’ 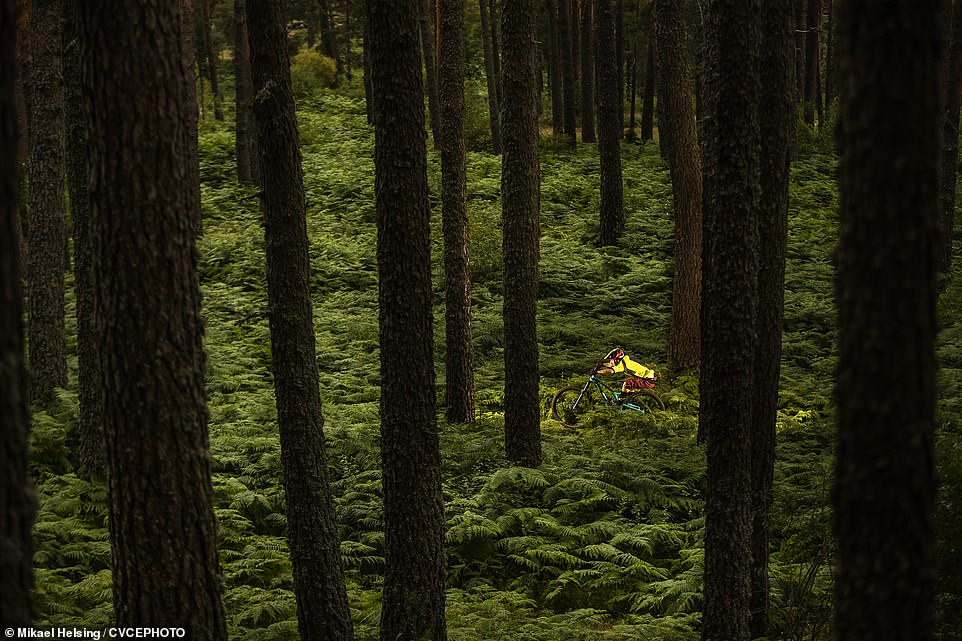 A striking image by Spaniard Mikael Helsing snapped in the Spanish region of Segovia, home to dozens of mountainous biking trails. He said of the shot, which was given an honourable mention: ‘The photo was taken on a cloudy day, to avoid the excess of contrasts, the cyclist’s jump was illuminated with two flashes located behind the trees’ 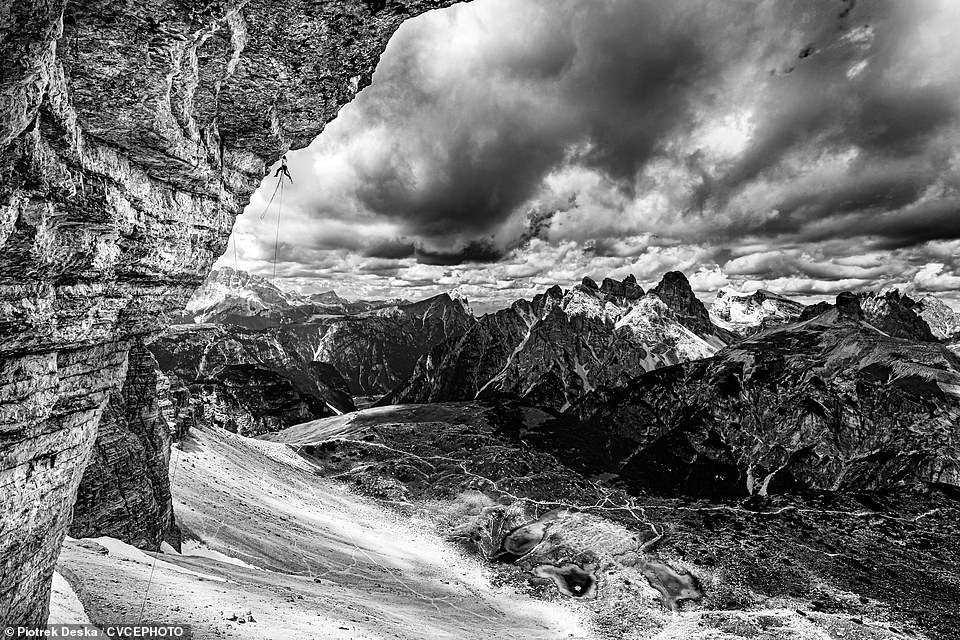 An honourable mention went to Piotrek Deska from Poland for this incredible shot, which shows climber Lukasz Dudek on a route known as the Pan Aroma in the Tre Cime di Lavaredo mountain range in the Italian Dolomites. Deska said of his capture: ‘I joined [Lukasz Dudek] with a camera while he was working out the route before the actual push. Amongst many other shots, I wanted to also create an image that will show the scale of this project. After converting the image into grayscale, it got much more dramatic and became one of my favourites of the whole set’ 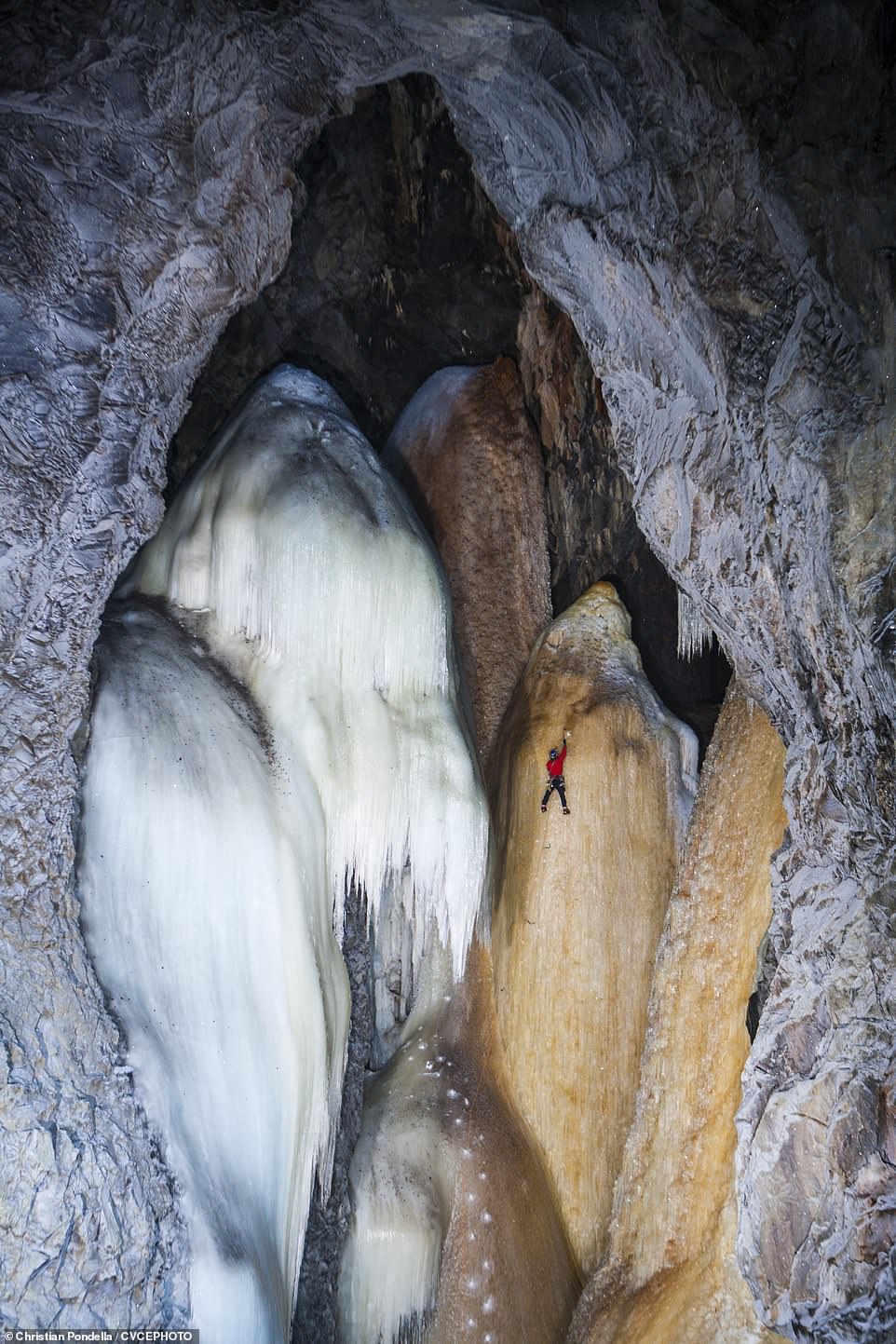 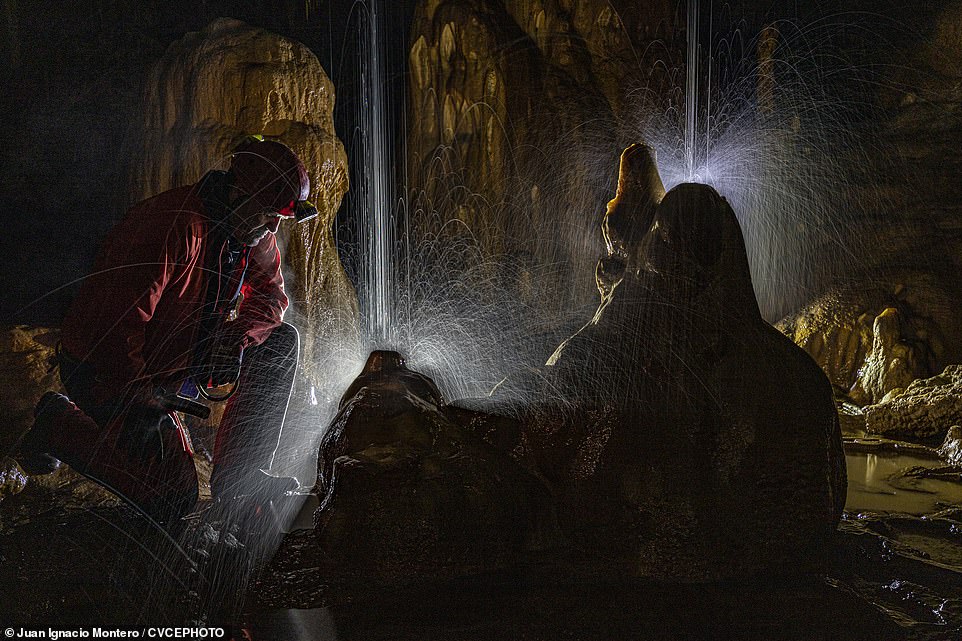 Spaniard Juan Ignacio Montero ventured to the Alda cave in the municipality of Cabrales in northwestern Spain and used special lights to capture this intriguing image, which was given an honourable mention 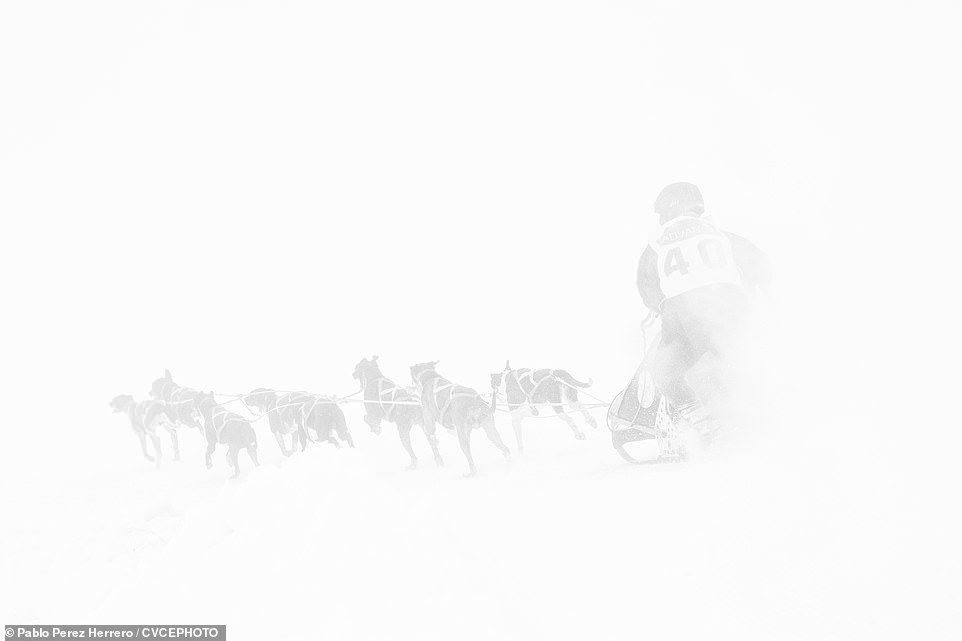 Pablo Perez Herrero captured this shiver-inducing shot while attending a dog sledging race in Baqueira Beret, which lies in the heart of the Pyrenees and is the largest ski resort in Spain. The photographer, a Spaniard, said it was an ‘unpleasant morning with wind, cold and fog’ but the event proved to be ‘wonderful to photograph’. His perseverance was rewarded with an honourable mention

The Best Kid-friendly Hikes in the U.S., According to Parents