South Australia has become the next state to declare Greater Brisbane a hotspot, after a strict three-day lockdown was announced by Queensland health authorities.

As of midnight on Friday, anyone coming into SA from the hotspot area must complete 14 days of quarantine.

Premier Steven Marshall also announced anyone who entered the state from the Greater Brisbane area from January 2 will be required to get tested.

“Premier Palaszczuk has asked all other states to declare those areas as a hotspot and we have agreed to that on a national basis,” he said.

“Anybody who has been in the Greater Brisbane area will receive an SMS message from SA Health today requiring them to go and get themselves tested.

“We will clearly be looking very closely at this case over the next three days.” 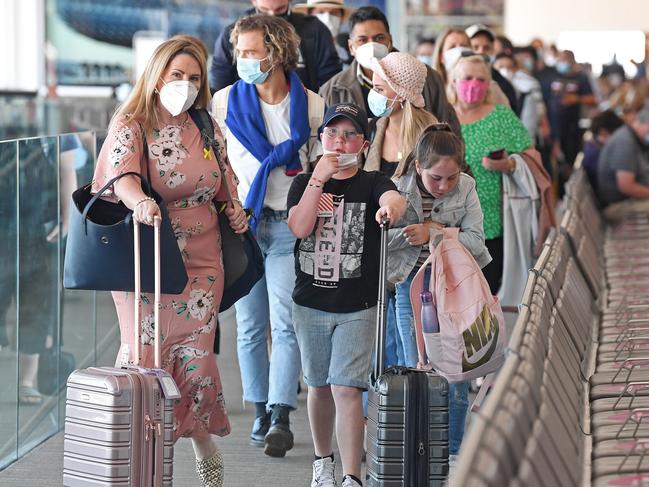 Anyone coming from Greater Brisbane as of midnight tonight will need to complete 14 days of quarantine in SA. Picture: Tom HuntleySource:News Corp Australia

Mr Marshall said SA authorities expected a significant increase in testing in Queensland and would be keeping an eye “very carefully” on the situation.

“If we need to take any further action with regards to border restrictions with Queensland, then we will have no hesitation in calling a press conference in doing that immediately.”

A number of flights are scheduled to land in Adelaide from Brisbane on Friday, including one that touched down as SA authorities made their announcement. SA Chief Public Health Officer Nicola Spurrier said those coming into the state from the hotspot area before midnight will need to be tested on one day one, five and 12 but are not required to quarantine.

The testing capacity at Adelaide Airport has been boosted to ensure all passengers from Brisbane are swabbed.

Professor Spurrier reminded the community not to become complacent and asked South Australians to reconsider travelling to Queensland.

“I want South Australia to understand that while there is that issue that is very concerning because we‘ve got somebody who has been out in the Queensland community with that particular variant, we do actually have that variant here in our own state,” she said. Anyone who comes to SA from Greater Brisbane prior to the midnight deadline do not need to quarantine but must be tested one day one, five and 12. Picture: Tom HuntleySource:News Corp Australia

“We have to be very mindful of that and we (can)not have complacency.

“Although the lockdown up in Greater Brisbane is for those three days … things can change quickly and we will be monitoring the situation very, very closely here.”

Both jurisdictions immediately require travellers coming from the “high risk area” to quarantine for 14 days upon arrival.

Travel memories and places in our hearts

Couple revamp a van into a stunning ‘hotel on wheels’