From a golden restaurant to marble bathrooms that ‘feel like private spas’, renderings reveal the eye-opening glamour of Cunard’s new ship Queen Anne

Marble bathrooms that feel like spas and rooms draped in rich fabrics and decadent gold embellishments – the interior of Cunard’s Queen Anne is looking decidedly ship-shape.

Following the unveiling of the new ship earlier this year, Cunard has released more renderings that offer further glimpses of her stunning interiors, including her suites, dining areas, bar and grand lobby.

What’s more, it has been revealed that Captain Inger Klein Thorhauge – Cunard’s first female captain – will take the helm when Queen Anne sets sail in 2024.

Cunard has released more renderings that offer further glimpses of Queen Anne’s stunning interiors, including her suites, dining areas, bar and grand lobby. Above is one of the ship’s 15 restaurants, which is decked out in shades of gold to reinforce the ship’s ‘luxurious but refined’ design aesthetic 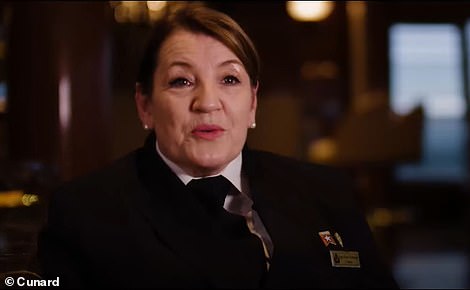 The interior of the ship, which is currently under construction at the Fincantieri shipyard in Italy, was curated by David Collins Studio, the interior designer Sybille de Margerie and the design firm Richmond International, in collaboration with Cunard’s Creative Director.

At the heart of the ship lies the Grand Lobby, which was designed as ‘a show-stopping entrance, full of energy and light’. The two-deck 825-seat space pays homage to the ‘Golden Age’ of travel with Art Deco-inspired decor.

There’s a brass sculpture on one wall, with metalwork shaped like fins, and ‘rich’ velvet seating that faces out towards a stage – here, guests can enjoy a variety of entertainment throughout the day and night with a tipple or two.

A new rendering shows the ‘newly refined’ Golden Lion pub – a staple on Cunard ships. The designers set out to add a touch of ‘British eccentricity’ to the pub with their choice of artwork

On the dining front, there will be 15 restaurants dotted throughout the vessel with a ‘wide variety of cuisines from around the world’.

One brand-new rendering shows how one of the dazzling restaurants is decked out in shades of gold to reinforce the ship’s ‘luxurious but refined’ design aesthetic.

Another shows the ‘newly refined’ Golden Lion pub – another familiar feature in the Cunard fleet. The designers set out to add a touch of ‘British eccentricity’ to it, with their choice of artwork on the walls.

A recently released rendering shows one of the Grand Suites, which features a dedicated dining room, butler’s pantry, and walk-in wardrobes 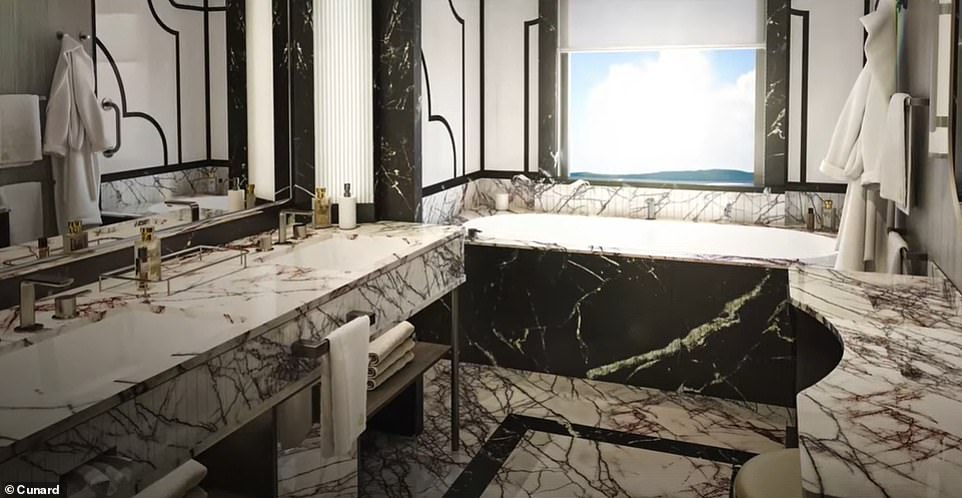 Cunard has also released tantalising glimpses of the accommodation.

One rendering shows the living room area of one of the ship’s Grand Suites, which also comes with a dedicated dining room, butler’s pantry, and walk-in wardrobes.

Above is a rendering – released earlier this year – of the ship’s grand lobby, a space that pays homage to the ‘Golden Age’ of travel 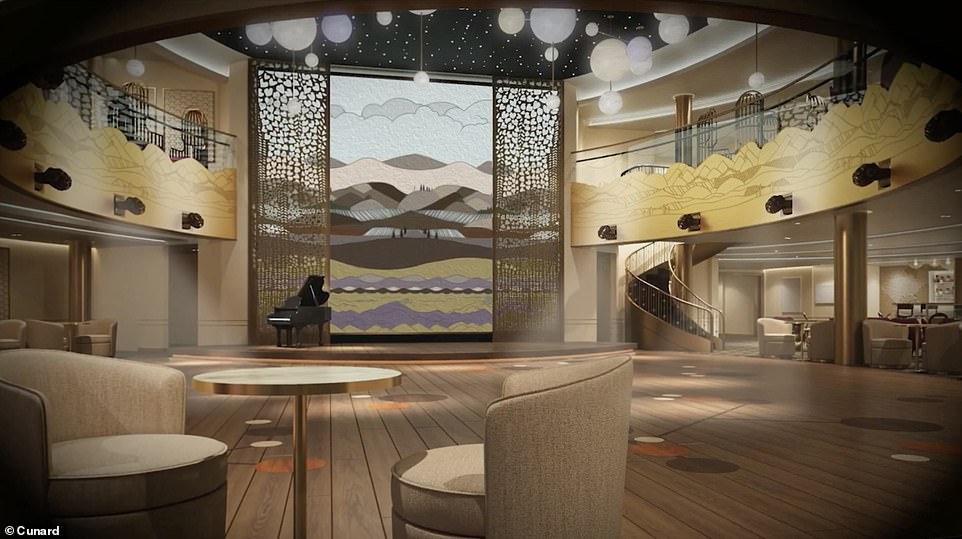 Other accommodation will include the yet-to-be-pictured Princess Grill Suites, which will feature a bar area, and Britannia balcony staterooms, with cosy sofa seating areas that look out to sea, and ‘light, bright bathrooms’ with glass walk-in showers.

Designers have also set their sights on the ship’s exterior.

Queen Anne will debut a ‘refined updated livery’ that alters the Cunard crest and introduces a new font that’s inspired by the ‘grand ocean liners of the past’. 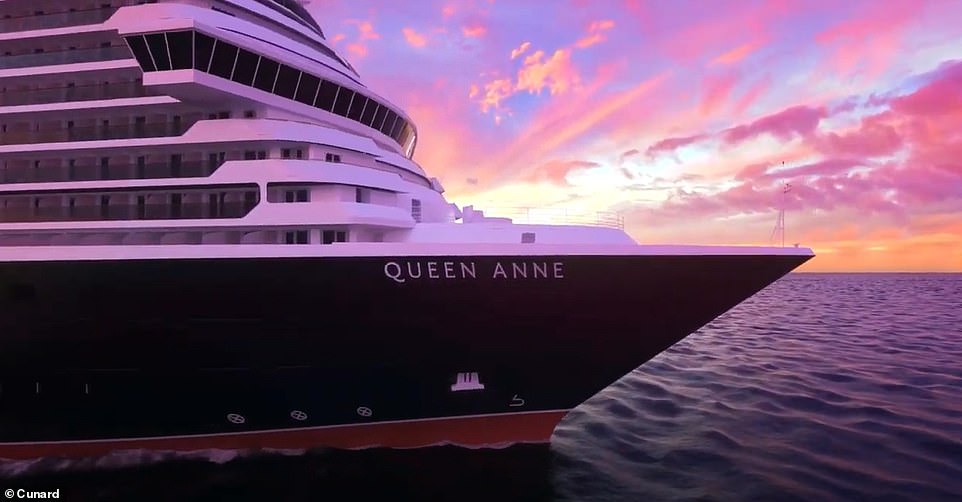 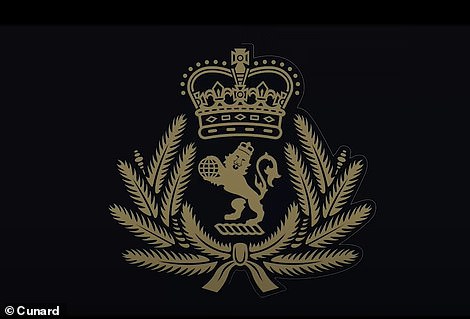 When it came to dreaming up the ship’s decor, the design team looked for inspiration in the Cunard archives at the University of Liverpool, trawling through historical documents, poster advertisements, brochure covers and plans of grand spaces of Cunard’s early ships.

Offering insight into the design process, David Collins Studio’s Lewis Taylor says: ‘We have added layers of architectural details and design codes that refer back to Cunard’s history and that add a touch of whimsy and British eccentricity to the experiences. These architectural design elements along with the exquisite level of service on board will make the new vessel truly unique.’

Adam D Tihany, Creative Director for Cunard, adds: ‘Just the way a world-renowned orchestra delivers a feeling or takes you to a moment or an era, Queen Anne’s aesthetic would do the same in harkening Cunard’s gilded age, but through the bold, onward lens of modernity.’

Queen Anne (pictured), Cunard’s 249th ship, joins a fleet that honours the names of each Queen Regnant over the past millennium

Queen Anne, Cunard’s 249th ship, joins a ‘luxury contemporary’ fleet that honours the names of each Queen Regnant over the past millennium.

She will make up a ‘remarkable’ quartet of Queen Mary 2, Queen Victoria and Queen Elizabeth. Her debut will mark the first time since 1999 that Cunard will have four ships at sea.

Queen Anne’s maiden season programme is available to book from May 2022. For more information visit www.cunard.com.

Qantas change a ‘nightmare for passengers’