The mellow side of Morocco: Taghazout Bay was once a rundown fishing village – but it’s transforming itself into the country’s coolest beach town (and flights there cost just £53)

Soon after leaving Agadir, the clattering of motorbikes and horn-honking fades, the landscape flattens and the Atlantic ocean fills the horizon.

And then it appears — a supersized curve of golden sand between the Atlases and the Atlantic. Taghazout Bay, some 15 miles north of Agadir, started life as a fishing village and then in the Sixties travellers tracing Morocco’s leg of Africa’s hippie trail — which connected cities such as Tangier and Essaouira (beloved by Jimi Hendrix) —paused here to soul-search and surf.

The hippies are (mostly) gone, but the atmosphere remains. People still come for the surf rather than the souks, and to hike the lower Atlas Mountains. 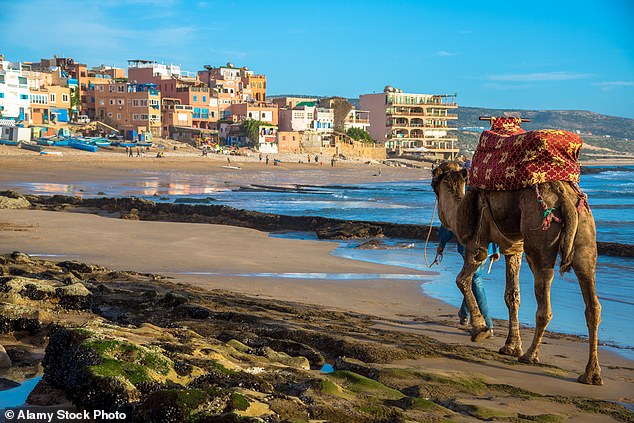 Bay of plenty: Sun-soaked Taghazout, which Tamara describes as ‘a supersized curve of golden sand’ 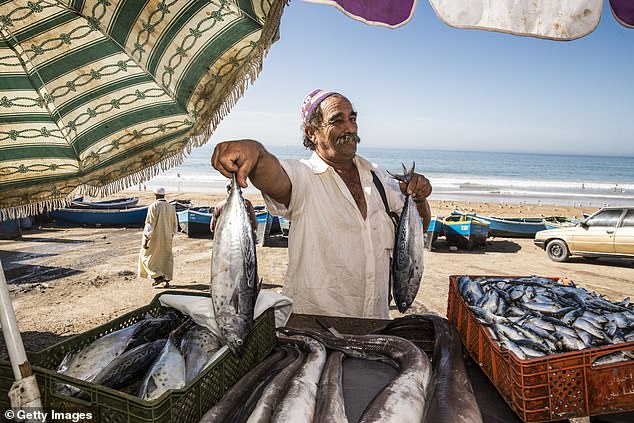 A fisherman shows off his catch on the beach in Taghazout. The bay started life as a fishing village

The easy-going vibe extends to the bay’s flurry of new hotels, which appear committed to blending in rather than imprisoning guests. My base, the Fairmont Taghazout Bay, opened in July. Its low-slung, sand-coloured buildings are squeezed between a freshly laid public beach promenade and aloe plant-dotted slopes, which rise and fall before angling sharply skywards towards the mountains.

Nods to Taghazout’s hippie roots remain, even here. In the hotel’s NOLA bar, there are plans for Gnawa players (Gnawa being the melodic, almost blues-like music Morocco is known for) to join the resident jazz trio.

At the gin bar, outdoor seating is headily fragranced by beds of local herbs, including sage and rosemary, alongside mint tea and date syrup, to flavour cocktails.

Spectacular landscapes are all around. I stroll from the hotel through villages scattered across the slopes behind, where low, rust-red buildings heave with so many hanging baskets that only tiny patches of stonework peek through.

I escape the heat by dipping into a tiny store manned by a Berber tip-toeing his way around boxes of oven-fresh khobz — Frisbee-shaped loaves of Moroccan bread.

As a mountain lover, it’s the hike through the lower Atlases I’m most excited about. My guide, Larbi, and I drive past stalls selling bunches of bananas and clay tagines, through olive tree-dotted canyons and tiny villages where Berbers lead loaded donkeys along dusty tracks.

We begin our hike to the whirr of crickets. The Lower Atlas Mountains aren’t the tallest Atlases, but they’re the oldest. Fossils protrude from boulders lining the footpath, and natural divots carved out of the rock have filled with glass-clear water and tiny fish. At one, an enterprising local has set up a cafe with semi-submerged seating, allowing customers to enjoy a fish pedicure while they eat. 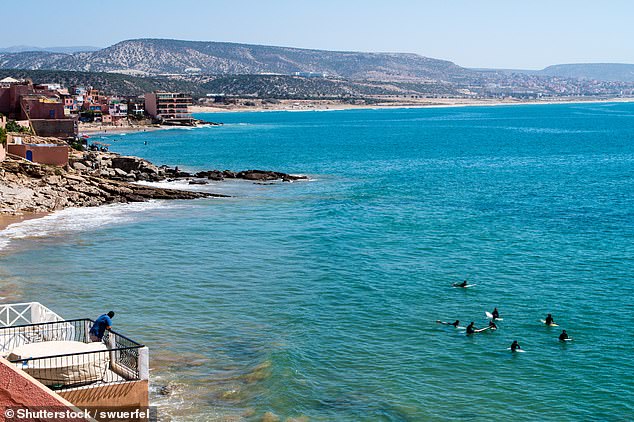 Surfers waiting for the next wave in Taghazout. The bay first became popular with surfers in the Sixties, Tamara reveals 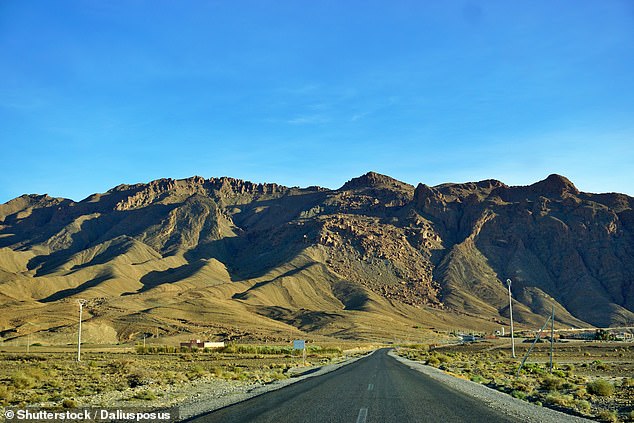 Many tourists flock to the Taghazout Bay region to hike the Lower Atlas mountains, pictured

As we press on, the pools become larger. We stumble across four Moroccans enjoying time off from their jobs in the Royal Moroccan Air Force. In between swims, they offer me slices of their boulder-size watermelon and proudly show me their tagine, simmering over a makeshift fire.

Later, near a squat farmhouse, Larbi points out the communal oven used to heat slabs of bread slid into the flames on wooden paddles.

We stop for lunch in the shade of one of the century-old argan trees which stud the landscape. Larbi explains that all argan oil comes from Morocco (a major revelation for someone who’s slathered the stuff on to her hair for years) and points out the beautiful mottled bark, before giving me an etiquette masterclass as he pours Moroccan tea into cups.

He tells me that even if the basket of khobz is by my side, I should never help myself, but wait until it’s passed to me.

The next day Larbi takes me for a different tour. Just outside Agadir, we pass Anza Beach, guarded by an enormous dinosaur statue — a nod to the fossilised dinosaur footprints found on the sand. 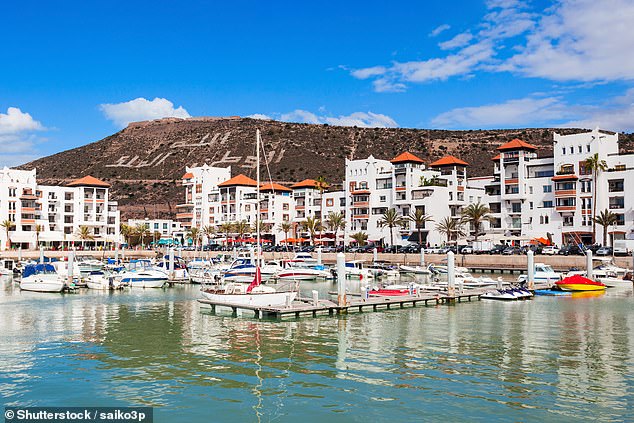 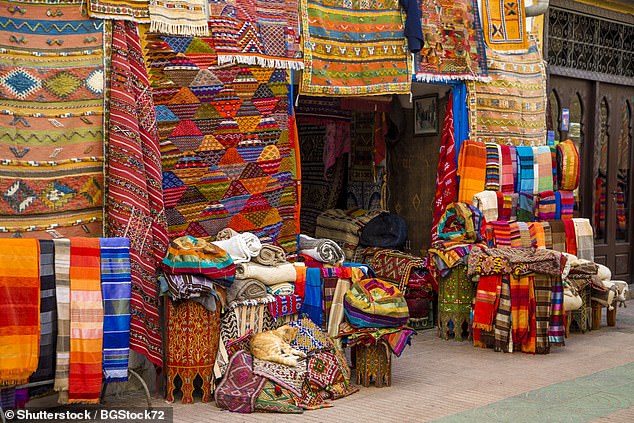 A colourful market in Agadir, which is some 15 miles south of Taghazout Bay

Ryanair (ryanair.com) London to Agadir from £53 return. Doubles at the Fairmont Taghazout Bay (fairmont.com) from £258.

Moments later, we pause in a camel-filled car park above Agadir to take it in from above.

It’s a hive of construction — a modern, noisy city rammed against a long curve of crowded golden sand. There are fewer ancient monuments than in Marrakech or Fes, largely because in 1960, most of Agadir was flattened by Morocco’s deadliest earthquake.

Today, its main beach is lined with sprawling hotels, and the port is colourfully chaotic, with locals queuing to hire tiny boats, and parents nervously eyeing children crumbling bread to throw at flailing fish below. Occasionally, a bright golden carriage clatters past — the Agadir equivalent of a Central Park horse-drawn coach ride.

I’m soon craving the gentle pace of Taghazout Bay. The Fairmont has a small private beach but it’s more fun to mingle with locals, so I pedal along the promenade, a smooth, linear hive of activity. Sand-blasted cafes nudge up against surf shacks and slick new seafood restaurants, and on the sand a Berber leads a plodding camel between the parasols.

Occasionally, the promenade widens to accommodate open-air gyms for locals keen to flex their muscles under the Moroccan sun.

When the promenade tapers out, I heave my bike on to the road and ride towards the headland, past a surf shop with a mosque-shaped logo. At the hilltop, I pause to take in the view of golden beaches and sheer mountains. It dawns on me that on my return home, my favourite cycle route — a camel-free stretch of the Basingstoke canal — might not seem quite so special any longer.

SOUKS, SKIING AND THE SILVER SCREEN…

SpringHill Suites by Marriott to open in Kansas City ·

All of the lights: How to survive Vivid Sydney