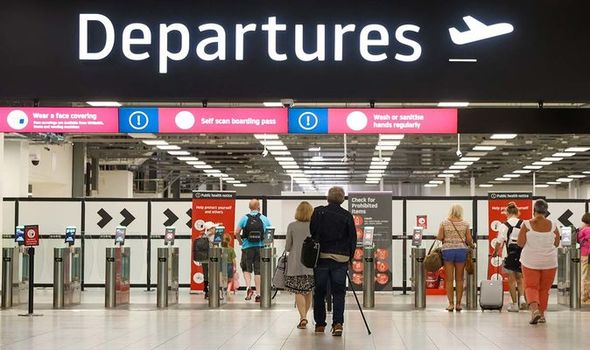 The red list was slashed from 54 to seven last night, with previously off-limits destinations such as South Africa, Mexico and Brazil back in the fold from Monday. The only destinations still on the red list are Colombia, Dominican Republic, Ecuador, Haiti, Panama, Peru and Venezuela.

The change is set to spark a holiday frenzy, as families race to snap up autumn and winter deals.

Many had pre-empted the announcement by bagging bargain offers on adventures in the Canary Islands, Costa Blanca, Majorca and the Antalya province of Turkey.

Other popular destinations being snapped up by sun-starved Britons include the Algarve, Crete and Cape Verde, off the western coast of Africa.

Chris Weber, from holiday comparison and deals website icelolly.com, said: “There remains an optimism about getting away in the remaining few months of the year, with winter approaching.

“Destinations like Majorca are proving very popular for last-minute October getaways, while Tenerife and Lanzarote are leading the way for winter sun.

“Close to six in 10 searches are still for travel in 2021, and November saw the biggest increase in search share.”

October accounts for more than a third of the site’s searches, while queries for November have increased by more than 50 per cent on last week.

“May 2022 is our next best-selling departure date and people are booking for Spain, Turkey and Greece as well as long-haul holidays in the Maldives, USA and Caribbean.”

Emma Coulthurst, from holiday price comparison site TravelSupermarket, said: “Bookings via our website are at nearly double the level they were before the dismantling of the traffic light system and the reduction in testing requirements. Some 40 per cent of all bookings in the last week are for October trips. People are really keen to get away.”

Earlier this week, the Foreign Office removed 32 countries and territories to which officials had previously advised against all but essential travel.

Nevertheless, red list countries remain, and travellers returning from those states are subject to a 10-day stay in a quarantine hotel, at a cost of up to £2,285 per adult. On Monday, the travel industry breathed a sigh of relief as restrictions were finally relaxed.

The previous green and amber lists were merged and pre-departure tests were scrapped for return to England.

However, there is no immediate plan to replace costly day two PCR Covid tests with cheaper lateral flow tests, despite a huge clamour by the beleaguered travel sector.

Responding to this, a Heathrow spokesman said: “Ministers need to prioritise the safe return of frictionless travel as soon as possible. Further progress has been made by reducing the red list and extending vaccinated status recognition to more countries.

“However, the missing piece to this is clarity on when cheaper lateral flow tests will be accepted, which is now critical in order to save half-term trips for many.”

England still has one of the strictest travel policies in Europe despite the changes.

Individual border rules remain a concern too, as some state that anyone over the age of one year must have received a recent negative PCR test result, while others ban unvaccinated over-12s outright.

In the United States, bars, restaurants, cinemas, gyms and beauty parlours in Los Angeles, New York and San Francisco will require proof of a two Covid jabs from next month.

“I’d expect booking demand to increase further as the red list is cut down to just a few countries.

“As Ireland and Australia have shown, there’s no need for a red list or quarantine as there have been no new variants since May.”

Sean Doyle, British Airways CEO, said: “It finally feels like we are seeing light at the end of a very long tunnel. Britain will benefit from this significant reduction in red list countries.

“Once we have a firm date for the reopening of US borders in November, we look forward to reconnecting our two countries, reigniting transatlantic businesses and reuniting families who were separated for nearly two years.”

If You Recognize This Man in the Airport, He’ll Upgrade Your Flight to First Class or Give You a Free Hotel Suite

Inside the filming locations for BBC’s Les Miserables adaptation

The Votes Are In: Smithsonian National Zoo Finally Has a Name for Its Baby Panda Cub

5 of the best luxury hotels for active travelers in Mazatlan