Home » Travel » Holidays with amazing wildlife encounters on the itinerary

Ditch the sunlounger – and go wild! From hearing the howl of wolves in Italy to watching eagles swoop in remote Scotland, the best breaks for incredible animal encounters

There is little more exhilarating than seeing some of the world’s rarest and most spectacular wildlife in its natural habitat. And these habitats – the shadowy crags of mountains, dense green rainforests, vast expanses of ocean – are often remote and far flung from the usual tourist trails, so getting to them can be an entire adventure in itself.

So if you’re ready to ditch the sunloungers in order to witness mother nature’s most jaw-dropping spectacles, here are the pick of the best holidays designed to showcase Earth’s extraordinary creatures while protecting them and their often fragile environments. 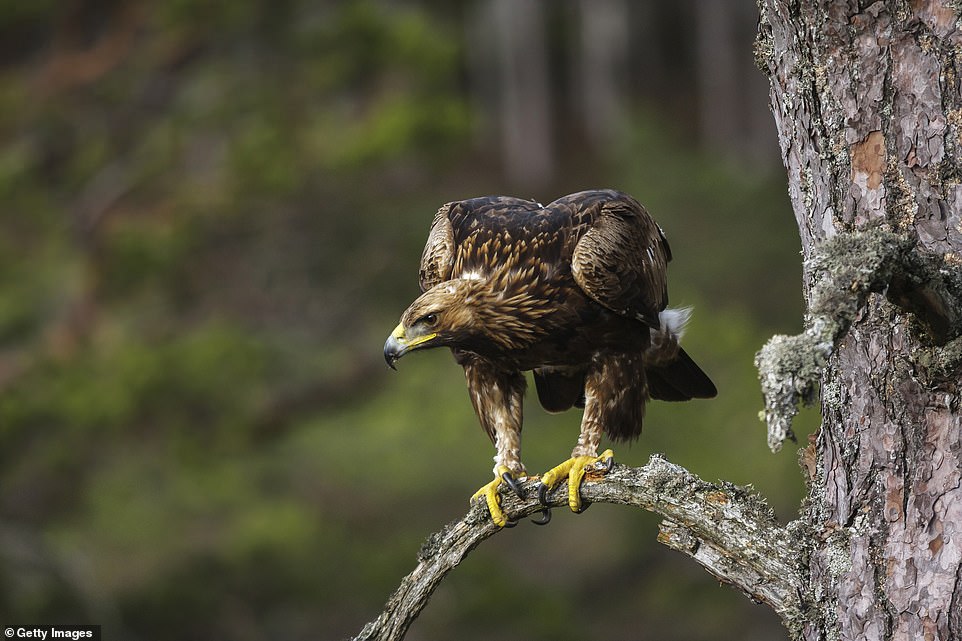 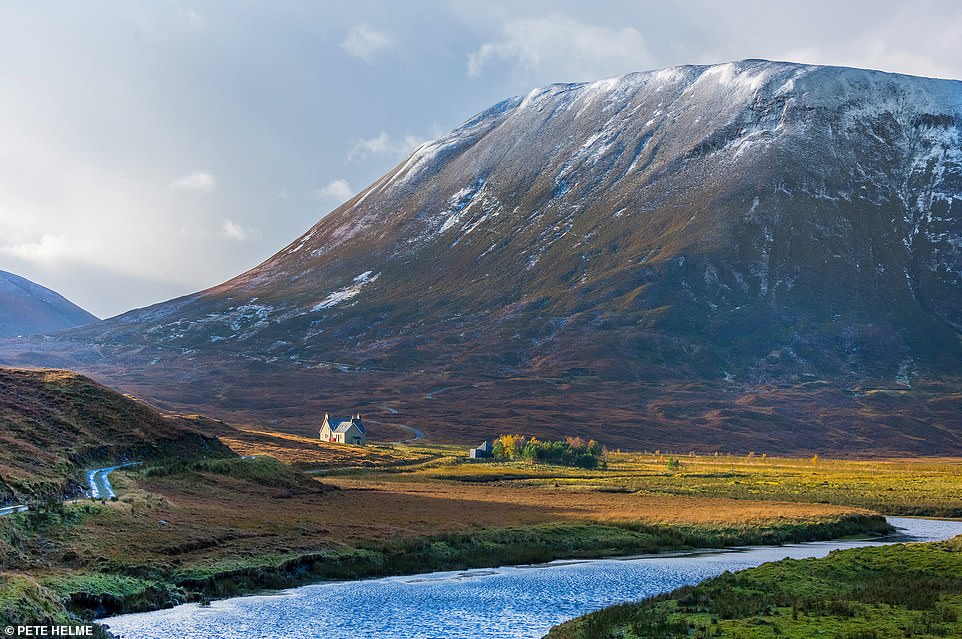 Enjoy splendid isolation at Alladale’s on-site self-catering Deanich Lodge (above), thought to be one of the most remote buildings in Britain

Alladale Wilderness Reserve, in the heart of the Scottish Highlands, is an out-and-out rewilding success story.

The 23,000-acre utopia is just an hour north of Inverness, yet you’ll feel as if you’ve tumbled into Tolkien’s Middle-earth. That’s because the team here have been working tirelessly for years to restore the area to its former lush glory, reintroducing species and planting close to a million native trees.

As such, wildlife-spotting opportunities are superlative – an otter here, a red squirrel there (there are now more than 300 in the area) – but it’s the golden eagles that patrol the skies above that truly demand attention.

Alladale is a reliable location to try to secure a sighting of the stunning birds of prey. Book a guided hike with one of the rangers and you’ll get intel into the resident breeding pair and nesting sites, as well as the colossal white-tailed sea eagles that also roam these verdant hunting grounds. 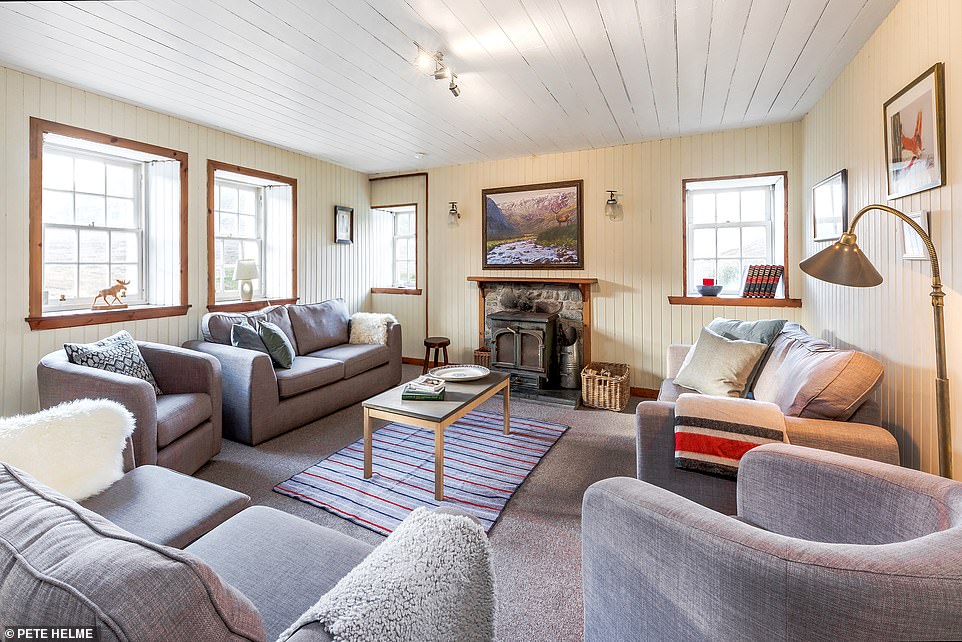 The lounge area inside Deanich Lodge, which can be booked from two to 16 guests from £40pp a night

Why so special? The splendid isolation. This is a place where you really are getting away from it all – the on-site self-catering Deanich Lodge is thought to be one of the most remote buildings in Britain.

What else can I see? Pine martens, ospreys and mighty stags. A programme is also in swing to breed and reintroduce Scottish wildcats – one of the world’s rarest felines – and if ambitions come to fruition, wolves.

Dates: Available year-round. Deanich Lodge can be booked from 2-16 guests from £40pp a night (alladale.com). 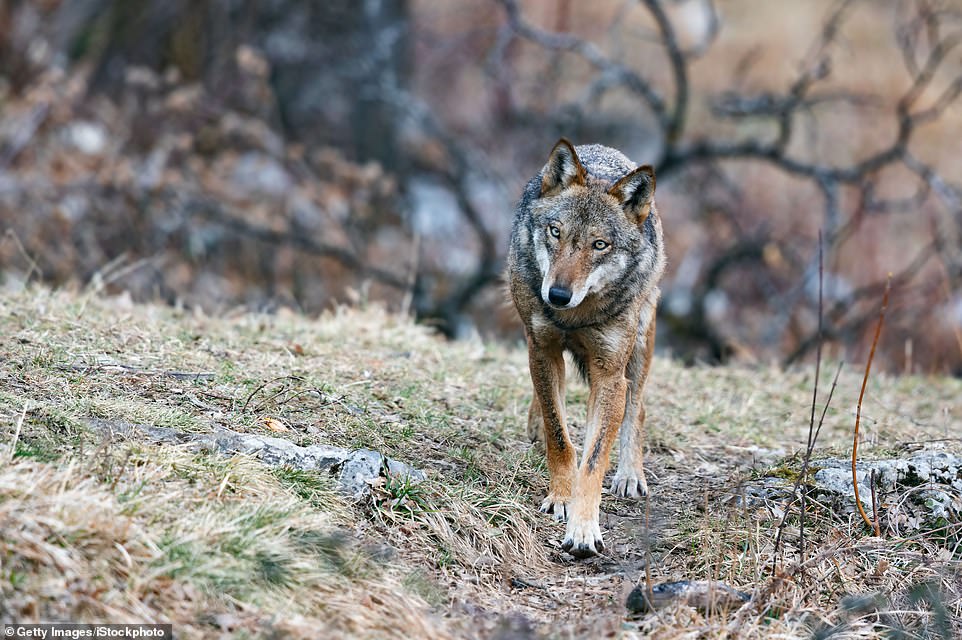 Much Better Adventures offers a two-night winter group trip to the Central Apennines – in search of Italy’s most enigmatic creature (above). The sound of the wolves calling during torchlit evening walks will raise every hair on the back of your neck

Ever wondered what it feels like to hear a wolf pack howl under the light of a bright, clear moon?

On this two-night winter group trip to the Central Apennines you’ll join expert wildlife trackers in search of Italy’s most enigmatic and rare creatures. Dawn is one of the best times to spot them, so, fuelled by fresh coffee, you’ll don snowshoes to hike up to the higher altitudes that they favour.

You’ll spend the nights in family-run guesthouses in the mountains, tucking into hearty Italian fare and local wines, and enjoying torchlit evening walks to listen as the wolves call out long and loud – a haunting, unforgettable sound that will raise every hair on the back of your neck. 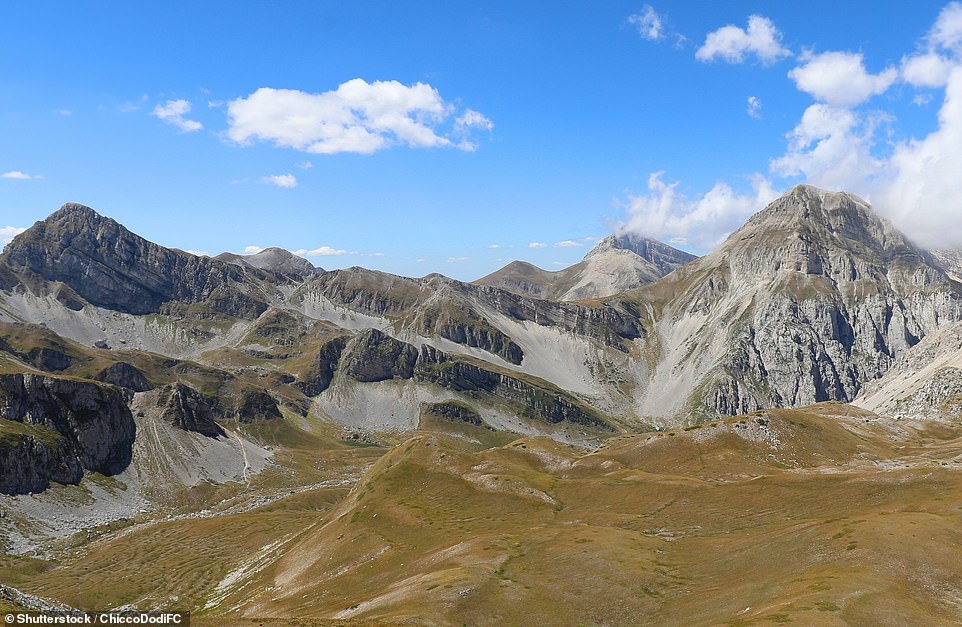 Wolves were once close to extinction in the Central Apennines (pictured), but are making a comeback thanks to passionate conservation work

Why so special? This adventure has been created in partnership with the Rewilding Europe foundation, and ensures guests a safe and respectful passage through the wolves’ habitat.

The creatures were once close to extinction here, but are making a comeback thanks to passionate conservation work, and this is the best, most sustainable way to see them.

What else can I see? You’ll hike through forests frequented by bears, weasel-like martens and wild boar. With a bit of luck you could also spot golden eagles and griffon vultures soaring overhead, too. 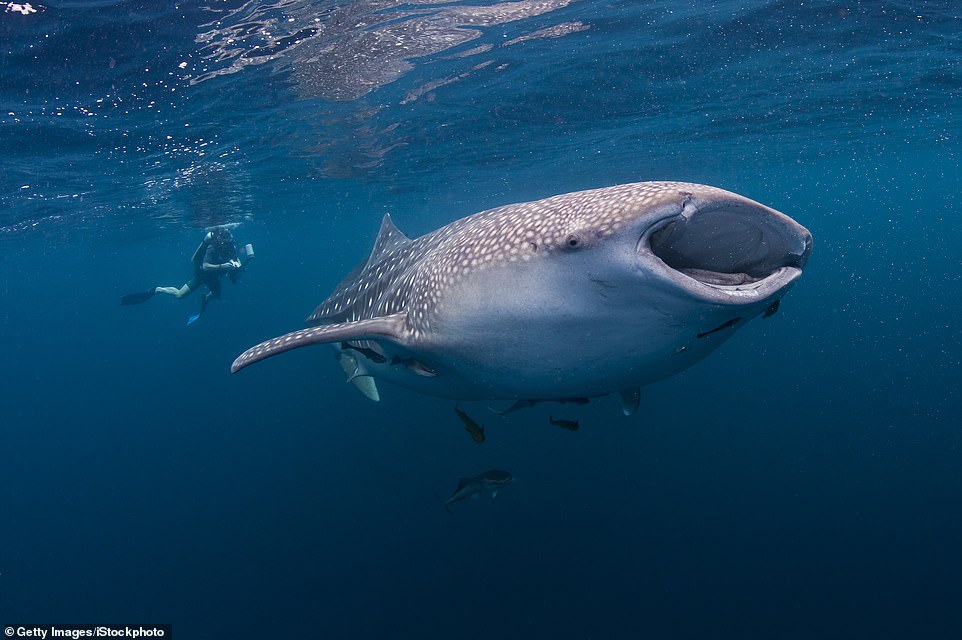 But the real treat comes when the boat heads towards West Papua. Here, guests can swim among large groups of whale sharks in Cenderawasih Bay.

The graceful animals – the largest fish in the world which can grow to more than 40ft and weigh more than 20 tons – can be spotted roaming here almost every day of the year, often congregating in large numbers like nowhere else on Earth.

Heritage Expeditions’ trip takes in the Raja Ampat archipelago (above), where dazzling birds of paradise can be seen

But you won’t find huge crowds of tourists, meaning you’re free to share the waters with these gentle giants, gawping at their seemingly cavernous (but totally harmless) wide-open mouths as they feed.

Why so special? The voyage ventures well off the tourist route, exploring islands that are rich in dense, untouched rainforests and home to rare flora and fauna.

What else can I see? Take your pick from dazzling birds of paradise in Raja Ampat, blue-fronted lorikeets on remote Buru Island and rare dugong in the waters surrounding Misool. 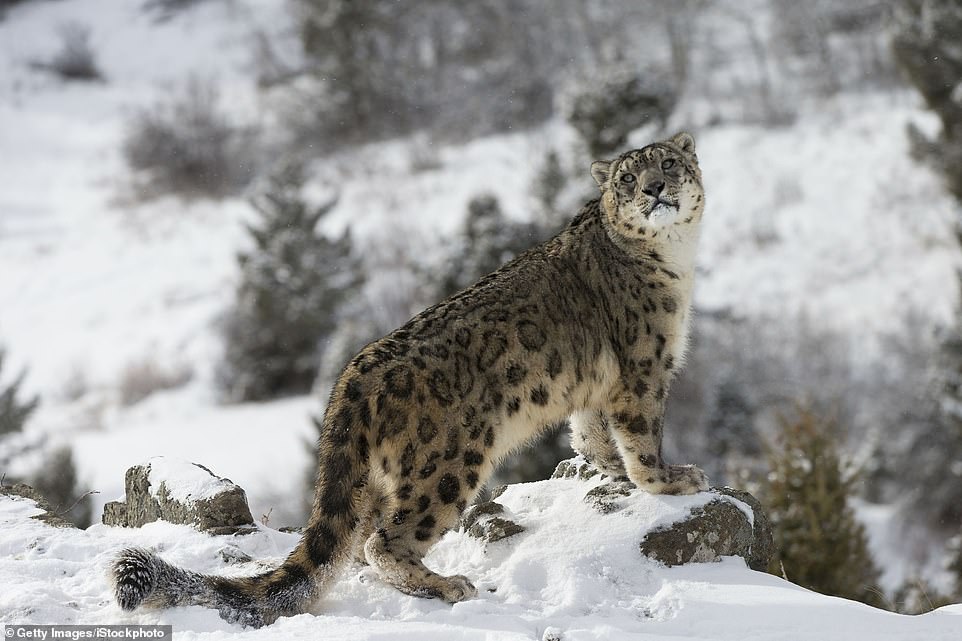 And Beyond offers an 11-night trip to the Trans-Himalayan region of Ladakh, with guests taken into the wind-scoured landscape in search of snow leopards – predators so elusive they’re known as ‘grey mountain ghosts’

The Trans-Himalayan region of Ladakh, nicknamed Little Tibet, is a high-altitude oasis for some of the rarest wildlife on the planet.

This 12-day photographic expedition, on foot and in 4×4 vehicles, takes guests into the wind-scoured landscape in search of the magnificent snow leopards – predators so elusive they’re known as ‘grey mountain ghosts’.

While winter temperatures plummet to -15C (5F), and as wolves pad through the snow and golden eagles wheel overhead, guests are led by an expert guide as local spotters help secure heart-pounding sightings. 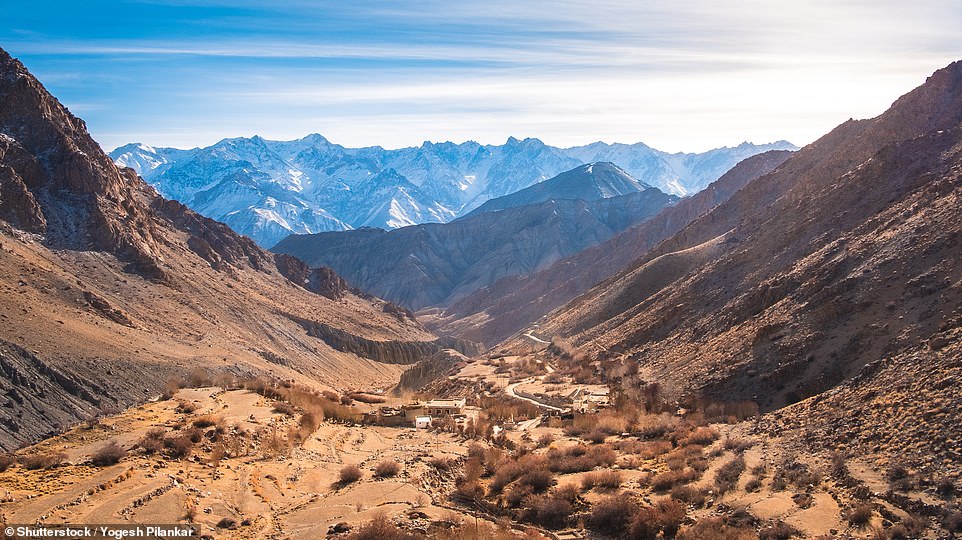 Ladakh has been hailed as one of the last frontiers for wildlife tourism, and Ulley village (pictured), where you’ll stay with a local family on And Beyond’s tour, has only recently been developed for snow leopard viewing

And when that moment comes, witnessing a snow leopard stalk a herd of blue sheep or a mother guiding her cubs across boulders and ravines, is truly a once-in-a-lifetime experience.

Why so special? Ladakh has been hailed as one of the last frontiers for wildlife tourism, and Ulley village, where you’ll stay with a local family, has only recently been developed for snow leopard viewing. This means it’s completely free of crowds, so you will likely be the only visitors in the mountains.

What else can I see? The valleys of Ladakh are great for spotting urials (wild sheep), Himalayan fox and ibex, which can climb and perch on virtually vertical cliffs. 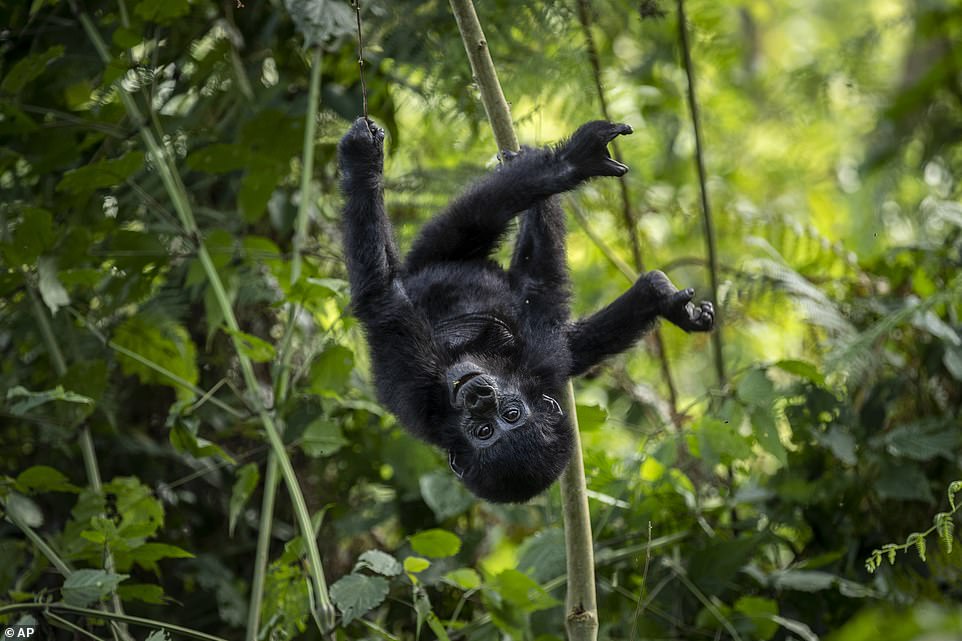 A one-year-old baby mountain gorilla hangs from a branch in the Bwindi Impenetrable National Park. G Adventures offers an eight-day trip to Uganda and Rwanda from £2,749pp that takes in the park

Bask in the rich biodiversity of Uganda and Rwanda, and spend time with some of the most human-like animals around on this intimate small-group trip.

You’ll need a relatively good level of fitness, as you’ll be trekking through the evergreen forests of Kibale National Park in search of rambunctious chimps, and hiking the lush, emerald green tangles of the daunting Bwindi Impenetrable National Park to find family groups of mighty mountain gorillas (although local porters can be hired to carry your pack and make things a little easier).

There’s plenty of opportunity to kick back though, on safari drives in Queen Elizabeth National Park and peaceful nights spent on farms, falling asleep to a soothing soundtrack of monkeys and birds. 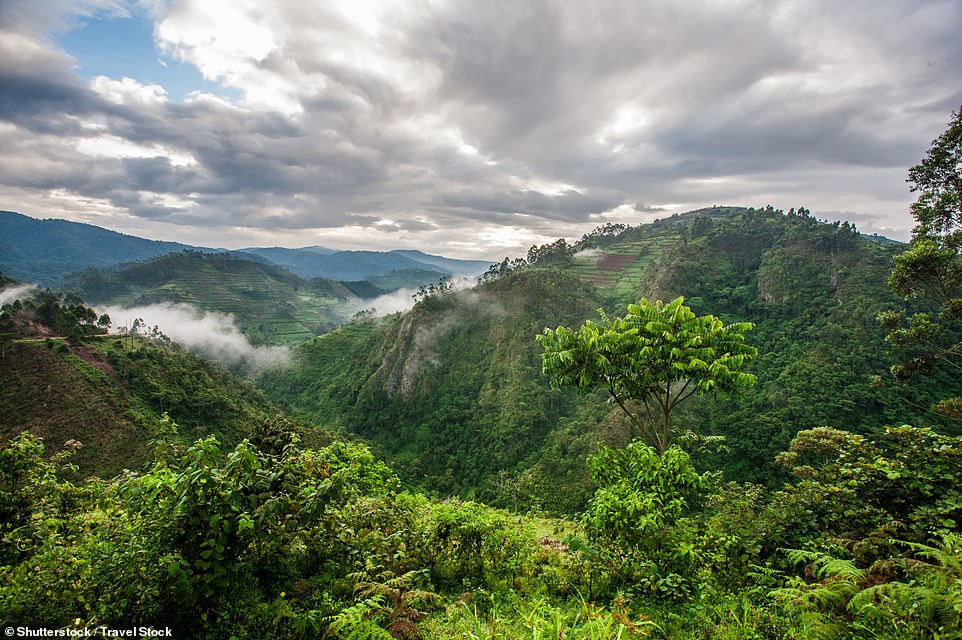 You’ll need a relatively good level of fitness for G Adventures’ odyssey as it involves a good deal of trekking, but local porters can be hired to carry your pack and make things a little easier. Pictured is Bwindi Impenetrable National Park

Why so special? The trip is endorsed by Dr Jane Goodall, the world-renowned primatologist, so you can be safe in the knowledge that as you travel you are helping to protect wildlife and empower local communities.

What else can I see? While trundling along in your safari vehicle in Queen Elizabeth National Park, be sure to keep your eyes peeled for warthogs, elephants, buffalo, hippos and five species of primates.

Dates from November 12. Eight days cost from £2,749pp, including activities, accommodation and some meals (gadventures.com). 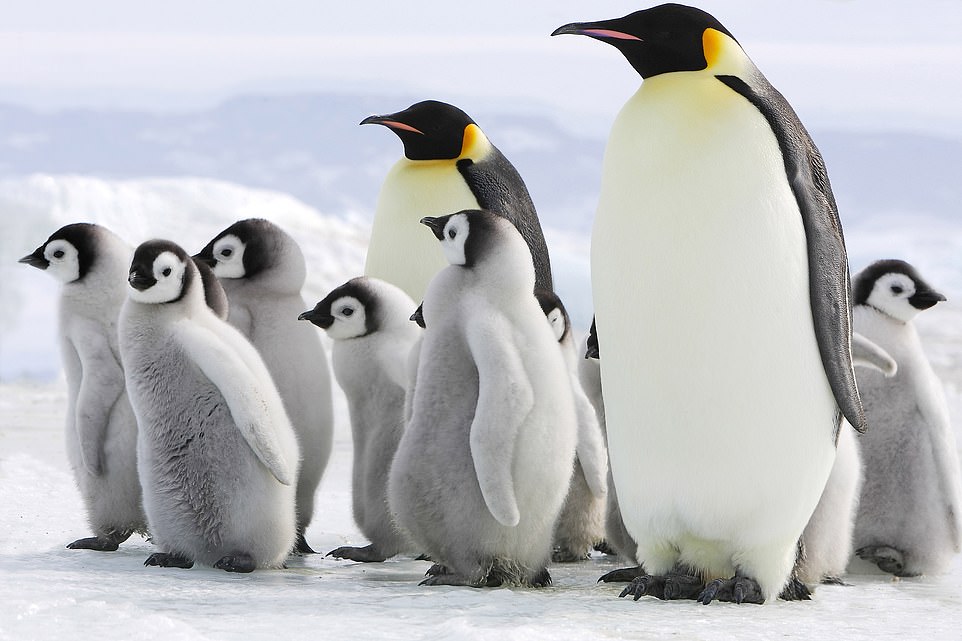 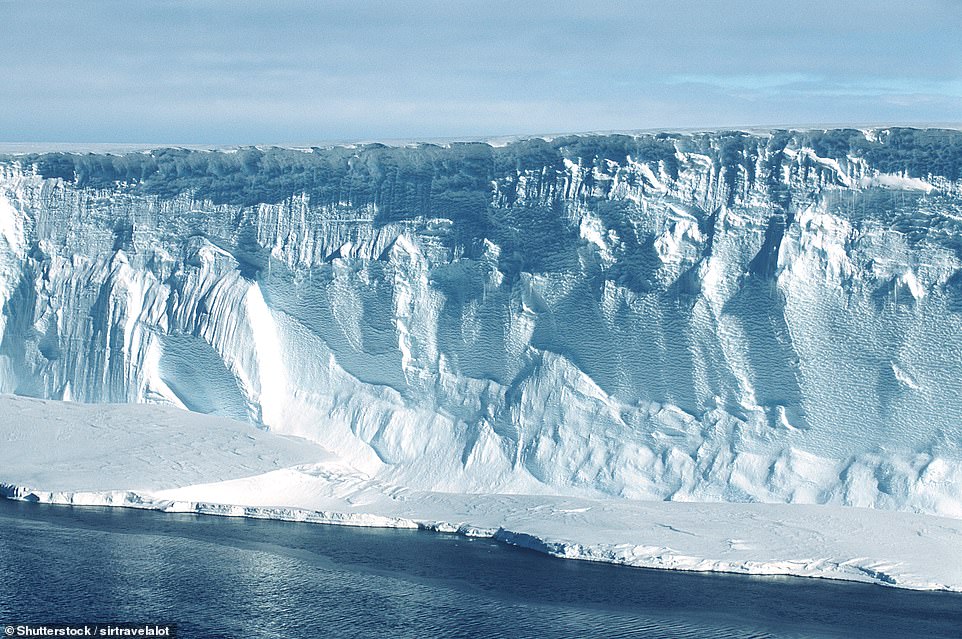 While cruising in the icy Weddell Sea, pictured, you might spy pods of humpback whales, orcas and minke whales breaching the glassy water’s surface

Snow Hill Island in Antarctica’s remote Weddell Sea is mainly visited by scientists to study the Emperor penguins that live in this icy landscape.

But for the first time, the ultra-luxury cruise ship Scenic Eclipse is offering its guests the opportunity to embark on an exhilarating helicopter excursion to view the penguins in their natural habitat.

Available from December, the excursion has been planned to coincide with the end of the penguins’ breeding season, making it the perfect time to spot downy chicks as they shed their fluffy grey feathers and prepare for their first swims.

Why so special? The penguin colony, situated on the very edge of the Antarctic Circle, was only discovered in the ’90s and is accessible only by helicopter. The ultra-luxury Scenic Eclipse, with two on-board helicopters, is one of the only cruise lines able to facilitate such an experience and take guests into such a hard-to-reach destination that few people will ever visit.

What else can I see? While cruising the icy Weddell Sea, you could spy rookeries of plump elephant seals lazing on the beach, or pods of humpback whales, orcas and minke whales breaching the glassy water’s surface.

Dates from December 19. The 19-day Antarctica and Weddell Sea voyage, which begins in the Argentine capital Buenos Aires, costs from £16,145pp, including flights, all meals, drinks and activities. Helicopter experience costs extra (scenic.co.uk). 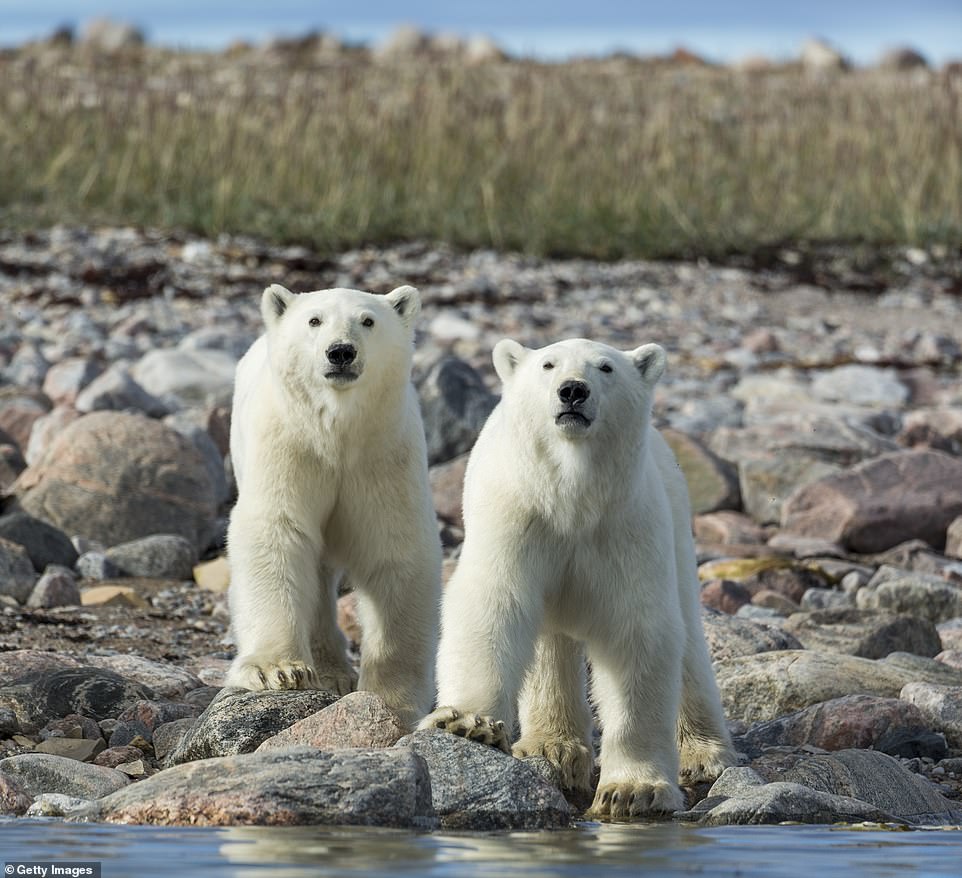 Manitoba in summer is an astonishingly beautiful place, where the tundra blossoms into a sea of pink and purple wildflowers and animals are out in abundance.

This includes magnificent polar bears who make their way to land with the warmer weather, lounging in patches of dazzling fireweed or padding their way along the rocky shores (they can sometimes be spotted hunting beluga whales from the beaches).

Guests on this eight-day trip will be based in a family-run lodge on the shore of Hudson Bay, surrounded by wild, bold landscapes and the extraordinary wildlife of this polar region.

Days can be spent on marine tours – spotting and swimming with hundreds of white beluga whales – trekking in search of caribou or polar bears. Sometimes, however, you won’t even need to change out of your pyjamas, as the curious bears occasionally wander so close to the lodge you can sit and watch them with your morning cup of coffee. 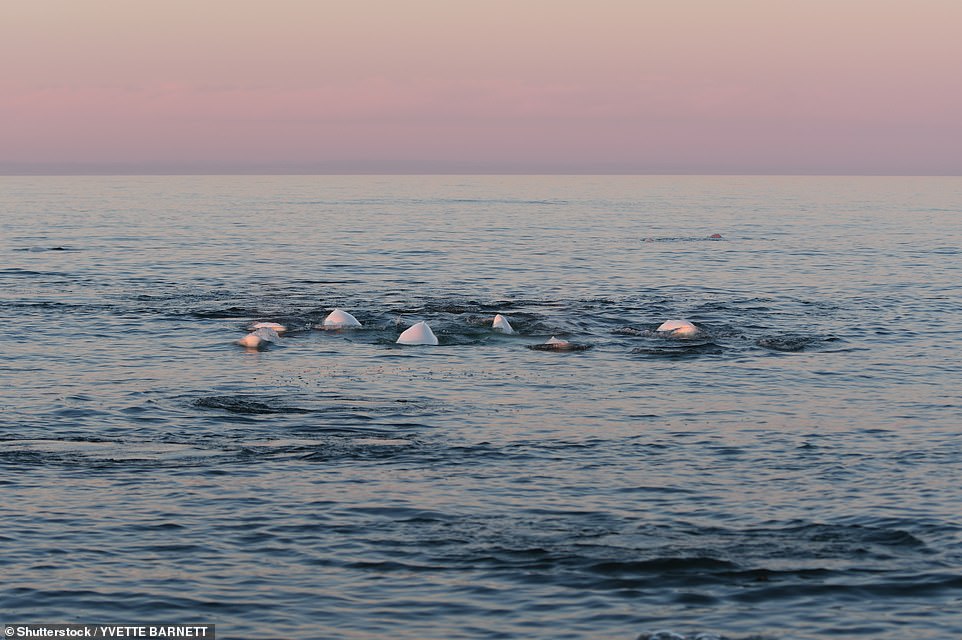 Why so special? The tour is run by Responsible Travel, and often it has the only boats on the quiet Seal River estuary, making spotting the polar bears an intimate experience.

What else can I see? Caribou, foxes, wolves, grizzly bears and wonderful birdlife. And the stunning Aurora Borealis, which is particularly strong in this area, flickering across the night’s sky like waves of vivid green and purple silk.

Dates from July. Eight days from £10,760pp, including meals, activities and flights (responsibletravel.com).

Norwegian Axes All Flights to Caribbean

Ex crew member reveals how clean cruises really are – will it stop the spread of viruses?