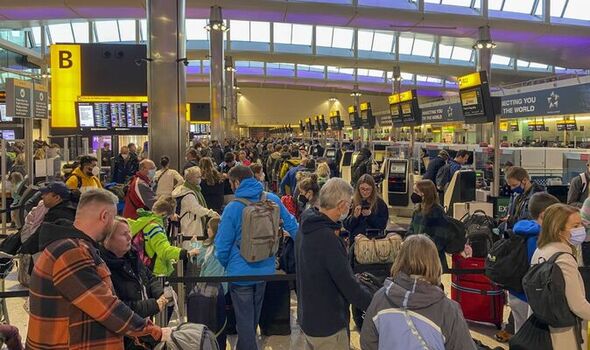 British Airways and EasyJet have already cancelled hundreds of flights to some of Britain’s most popular foreign holiday destinations.

One expert warned it is a “nightmare”, adding: “Airlines are certainly seeing a high level of demand to fly, but are simply unable to cope with that demand due to a lack of resources.”

Experts said it could be “up to 12 months” before the industry finally recruits enough staff at airports and on airlines to adequately deal with the resumed holiday demand.

British Airways has cancelled flights to Miami, Hong Kong and Tokyo over the next four months, and hundreds of flights to Europe and the US were also cancelled by BA and easyJet over Easter.

BA boss Sean Doyle originally told staff in an internal message that flights would be cancelled until the end of next month, partly due to staff shortages.

Furious passengers yesterday condemned the situation. One said: “British Airways strikes again, cancelling more flights, affecting a fourth member of my family and screwing up her hen do next month. BA also needs to rethink their marketing. Enhance your trip? How can we if you keep cancelling?”

Kully Sandhu, managing director of Aviation Recruitment Network, said: “In my opinion, it could be up to 12 months before we see staffing at airports back to pre-pandemic levels.

“Recruitment for people at airports takes longer than roles elsewhere because of necessary, additional security and background checks.

“Routine recruitment campaigns ground to halt during the pandemic and have been slow to start again as international travel has had a number of restrictions on it until recently.

“That means the recruitment pipeline was cut off and needs to be re-established. Aviation has lost its appeal, not only for returners but also for people who have never worked in an airport environment before.”

George Morgan-Grenville, chief executive of Red Savannah Luxury Travel, said: “Some airports are operating better than others. It is an unfortunate perfect storm and airlines and airports are trying to ramp up again after the pandemic.

“The travel industry is not an industry that can be turned on and then off again and it was inevitable it was going to take time. My own feeling is I don’t think we are going to see a problem-free summer by any stretch of the imagination.

“But I suspect the airlines and airports will be able to ramp up.

“If it is as bad as it has been purported to be, I think you will get a lot of very upset people.”

Paul Charles, chief executive of travel consultancy The PC Agency, said: “This is a staggering level of flight cancellations caused by a cocktail of not having enough staff in place and Covid-induced staff shortages.

Airlines are certainly ­seeing a high level of demand to fly, but are simply unable to cope with that demand due to a lack of resources.

“It’s a nightmare situation for airlines and airports at the moment.”

Julia Simpson, chief executive of the World Travel and Tourism Council and a former government adviser, said: “When you rebuild, there is inevitably going to be some disruption.

“However, the most important thing is that customers are told in advance. As long as you are given plenty of time and alternatives if you are told your flight is cancelled, it’s manageable.”

British Airways is cancelling half of all flights between Heathrow and Miami, reducing them to one each way a day from June 4 until September 7.

Flights to Hong Kong and Tokyo have also been slashed due to Covid restrictions.

An email sent to customers ­apologised, saying: “We’ll do ­everything we can to get you where you need to be.” British Airways has admitted it needs to “build more resilience” into its operation to manage staff sickness in order to provide a consistent service for ­customers rather than “letting them down at the last minute”.

A spokesman for British Airways said: “Aviation has been one of the industries worst hit by the pandemic.

“Airlines and airports are ­experiencing the same issues rebuilding their operations while managing the continuing impact of Covid.

“We are also building a completely new subsidiary at Gatwick while increasing the size of our schedule at Heathrow.

“So, while the vast majority of our flights continue to operate as planned, as a precaution we’ve slightly reduced our schedule as we ramp back up.”

Fears are now rising for Britons with foreign holidays booked this summer.

EasyJet cancelled hundreds of flights over Easter due to a lack of staff and a surge in demand as Britons were desperate to enjoy the Easter weekend abroad for the first time in two years.

An EasyJet spokesman said: “We are planning to operate our normal summer schedule, which is on ­average around 1,700 flights a day, this summer.”

Travellers at major UK airports, including Birmingham and Heathrow, have experienced hours of queueing before boarding flights in recent weeks amid the industry’s ongoing staffing crisis.

The travel chaos was further ­highlighted last week by pictures of massive check-in queues at Manchester.

The summer period is expected to be a busy one for airports and ­airlines, which could continue to cause issues if the staffing crisis gripping the industry does not get under control.

Oh dearie me. It wasn’t exactly a state secret that the Great British Public would stampede for holidays overseas once Covid restrictions eased.

So it does seem rather unfortunate that the likes of Manchester Airport, easyJet and British Airways appear to have been caught with their pants down ahead of the summer getaway.

The tedium of massive security queues and the stress of cancelled flights is the last thing people need after two years of pandemic travel misery.

However, while much public anger and blame will no doubt land on the desk of BA boss Sean Doyle, it’s worth considering how we got to this point.

The Government did lamentably little to help the UK travel industry during the pandemic and, in particular, aviation was thrown under a bus.

As Covid worsened ever more, I did fear that a UK airline might go under, it was that bad.

At one point, with its fleet almost entirely mothballed in storage, BA was reportedly burning £178million a week – clearly that mind-boggling sum was not sustainable and something had to give.

Sadly, as is often the way, many jobs were lost and, of course, re-hiring and vetting people is not as quick a process as firing. Plus other carriers are also seeking to replenish their staff. Factor in the current wave of Omicron absences and it’s a perfect storm for the present staff shortages.

While anyone booked to travel with BA over the peak season might be a little anxious, I do think they will largely come good on their promise to source alternative travel with BA flights or other partner airlines if they can.

There is still some spare capacity out there, especially across the Atlantic and to European cities, and at least many of the flight cancellations have plenty of notice – hopefully nobody will be rocking up at the airport and getting bad news on the departure boards.

So here we are again. As coronavirus finally, hopefully subsides, the long-suffering travelling public once more faces air turbulence. Deep breaths everyone.