Game of Thrones HBO studio tour to open in Northern Ireland, allowing fans of the show to see where many of its iconic scenes were filmed

Game of Thrones fans will soon be able tour the studio where many of the hit TV show’s most iconic scenes were filmed.

HBO has announced it is opening The Game of Thrones Studio Tour in Banbridge, Northern Ireland, from Spring 2020.

It will be located within Linen Mill Studios, and the tour will bring visitors face-to-face with original set pieces, costumes, props and weapons used to create the worlds of Westeros and Essos. 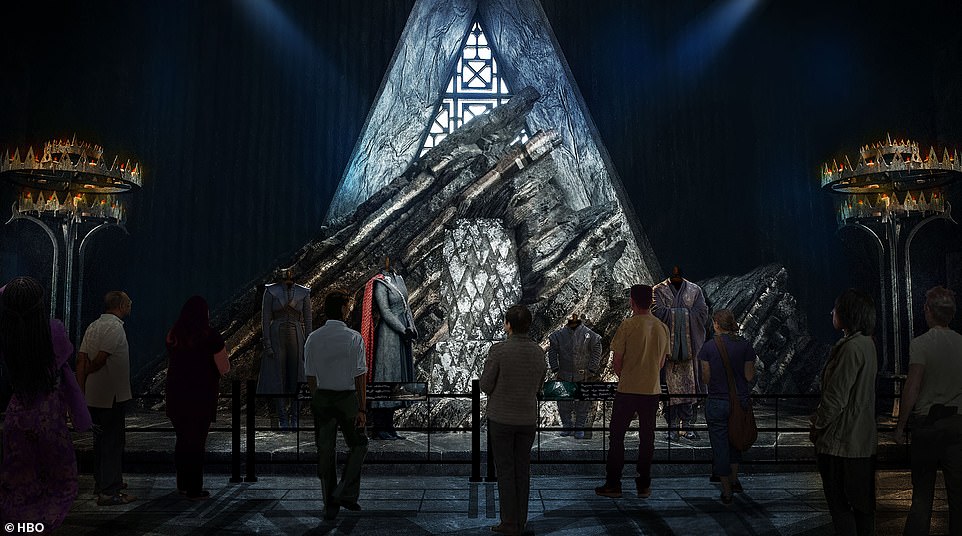 An artist’s impression showing what The Game of Thrones tour will look like when open to the public. This part is meant to represent the Dragonstone Throne Room 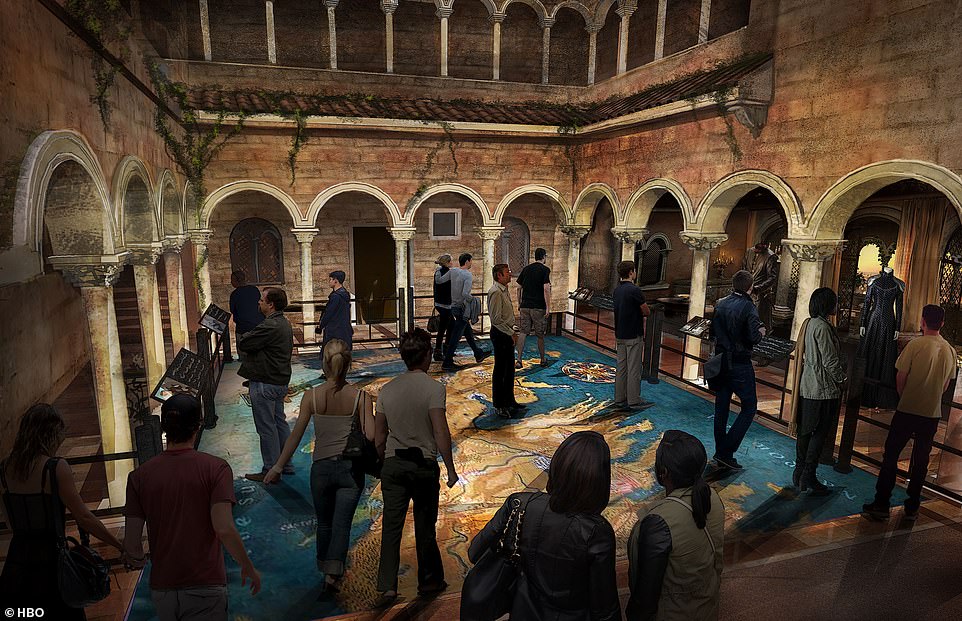 HBO has announced it is opening The Game of Thrones Studio Tour in Banbridge, Northern Ireland, from Spring 2020. Pictured is a rendering of Ceresi’s Courtyard

The tour, which will be a 110,000-square-foot interactive experience, is currently in the process of being designed and built.

It will allow visitors to wander in the very footsteps of Westeros’s most prominent residents, re-living key moments from the series and standing right where they took place.

In anticipation of the tour’s opening in Spring 2020, a ‘world-class’ creative team are working closely with Linen Mill Studios and HBO to bring the dynamic environments of both Westeros and Essos to life in a new format.

The ‘deeply immersive and sensory experience’ will ‘evoke the show’s magnificence from King’s Landing, Winterfell, Dragonstone, The Wall and the lands beyond, to kingdoms across the Narrow Sea like Mereen and Braavos’, according to a statement.

The studio tour will also feature a ‘first-of-its-kind’ collection of informative displays highlighting the production spaces and the craftsmanship and artistry of the creative teams who brought the series to life.

Information about production design and the art department workshops will enhance the visitor experience along with an interactive costume department station, displays about the make-up and prosthetics shop, the armoury, and others. 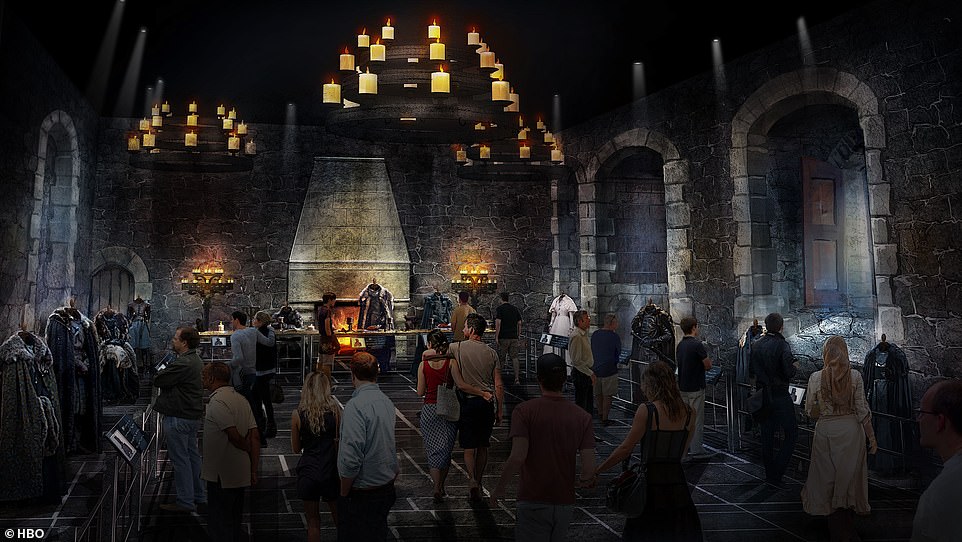 The studio tour will feature a first-of-its-kind collection of informative displays highlighting the production spaces and the creative teams who brought the epic series to life. Pictured is a rendering of the Winterfell area 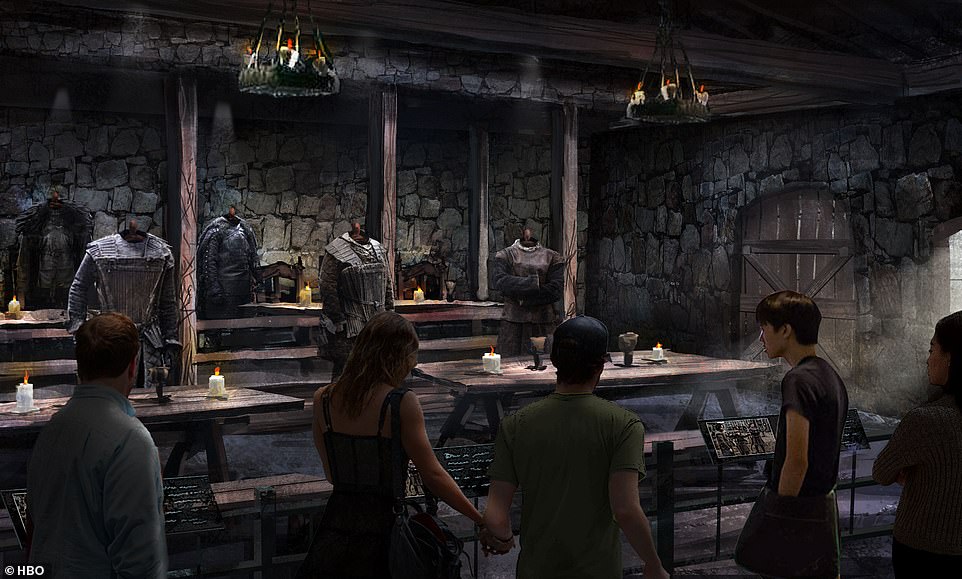 Information about production design and the art department workshops will enhance the visitor experience, according to HBO. Pictured is a rendering of the Dragonstone Map Room

Jeff Peters, vice president, licensing and retail, HBO, said: ‘It is our sincere pleasure to announce the first attraction from the Game of Thrones Legacy project in Northern Ireland.

‘Some of the most iconic scenes from Game of Thrones were filmed at Linen Mill Studios and our fans will soon have an opportunity to visit and see the work of the show’s incredible crew in the museum setting it deserves.’

While Andrew Webb, managing director at Linen Mill Studios, added: ‘Linen Mill Studios is thrilled, in partnership with HBO, to have this opportunity to offer fans a unique insight into the making of the Game of Thrones series in the authentic setting of one of its foremost filming locations.

‘We are committed to giving fans the opportunity to experience firsthand the most comprehensive selection of iconic elements from the show available anywhere in the world.’ 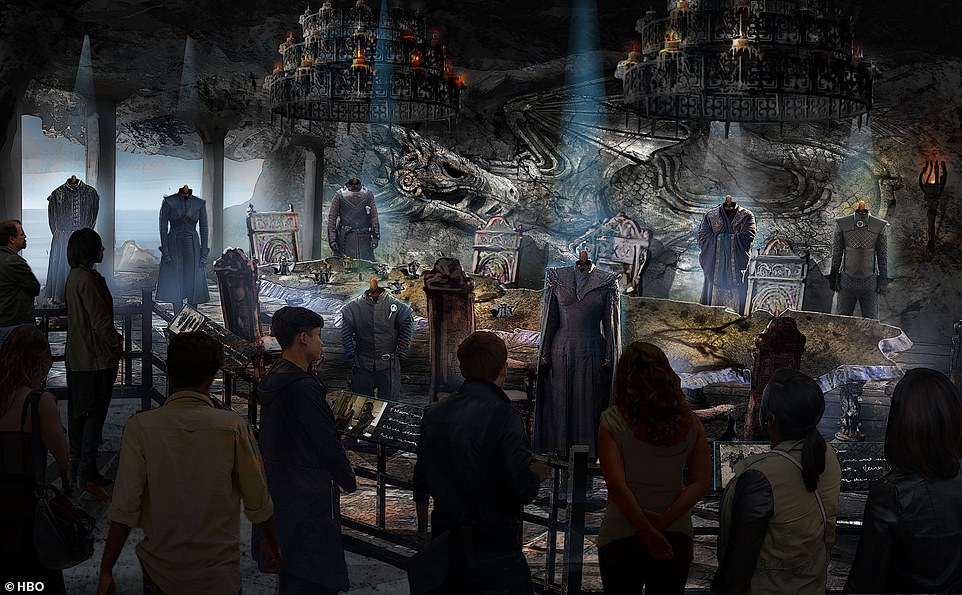 John McGrillen, the chief executive of Tourism Northern Ireland, said: ‘I have no doubt this investment will deliver a world-class visitor experience’. Pictured is the Mess Hall area of Castle Black

And John McGrillen, the chief executive of Tourism Northern Ireland, is certain the attraction will bring more visitors to the area.

He explained: ‘We very much welcome this exciting announcement. Game of Thrones has transformed Northern Ireland into a leading international screen tourism destination, bringing many more visitors and fans of the show to Northern Ireland to explore the stunning landscapes, coastlines and mountains showcased in the series

‘I commend both Linen Mill Studios in recognising the increasing opportunity in screen tourism here and HBO’s commitment to Northern Ireland as the ‘Home of Thrones’. I have no doubt this investment will deliver a world-class visitor experience.’