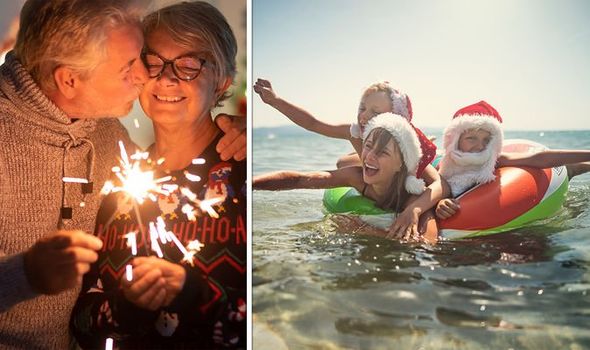 Nigel Ayres is an expat based in Spain and the founder of the Expat Network. He explained that although Britons will “enjoy the Spanish traditions”, for those who want to follow a more British approach, some products are “hard to find”.

Nigel explained this will be the first Christmas for many expats to be able to return to the UK: “In our first year we did what many Brits do at Christmas and returned to the UK to spend Christmas with family.

“In 2020 this was not generally possible with Covid travel restrictions in place and we have seen a number of friends travelling back this year again.

“For many this will be the first time they have been back to the UK for a year or more.

“This is only an option for people who have been double-vaccinated unless they have their residence in Spain due to the current restrictions.”

Nigel and his family have spent many years in Spain enjoying the Christmas festivities in the Mediterranean country. But what is it really like?

He said: “Our experience of Christmas in Spain last year was very much impacted by the pandemic.

“We were able to spend Christmas Eve on the beach with a group of friends and their kids.

“The kids went into the sea but none of the adults in our group – warm enough to be on the beach but only the hardy swam!

“The bars and restaurants closed at 5pm and there was a limit on the number of people which restricted our ability to enjoy Christmas Eve.

“Many restaurants are open on Christmas Day and many take up this option.

“With them restricted to six per table it was not possible to arrange larger groups.

“We spent the day on constant WhatsApp and Zoom calls to family and friends,” he admitted.

“This year it is generally easier, although proof of double vaccination or recent negative test is required for entry into any bar or restaurant with a capacity for over 50 people.

“We have seen people in Facebook groups suggesting boycotting these larger restaurants which seems very unfair given it is the Spanish authorities that have imposed the requirement and the bars and restaurants have no choice!

“The Spanish focus on Christmas Eve rather than Christmas Day. Seafood is the main celebratory food.

“They also make more of other days with public holidays to celebrate the Immaculate Conception on December 8 and Epiphany on January 6.”

Nigel continued: “The 12th night is when Spanish children get their presents, although my Spanish colleague who has an English wife tells me his children get gifts from Santa on Christmas Day and from the Kings on 12th night!

“Brits will enjoy the Spanish traditions with the parades of the three kings etc, but generally follow a traditional British approach.

“Turkeys can be found as well as Brussel sprouts but some things are harder to find, such as cranberries.

“It is generally best to buy when things are seen in the shops as they are often only available for a short time,” he said.

The world's most historic hotels

More Needs to Be Done to Help Travel Agencies

Cruises: Britain’s favourite cruise destination revealed – are you missing out?

I flew business class for 9 hours, and it made me wish I saved my money and bought an economy ticket