Home » Travel » Discovering the pleasures of the quiet corners of Sweden

A road less travelled: Discovering the pleasures of the quiet corners of Sweden (in a Volvo of course)

You would probably have to be at least 50 to remember when British people made a thing about buying a British car. In the 1960s you took delivery of the latest Austin, Morris or Hillman partly because you thought it was a good car but mostly because it was a patriotic act.

This seems a long time ago. But there are still countries where on the roads, the motor vehicles are a sign of national pride. France, for example, bristles with Peugeots and Citroens. Italy abounds with Fiats. And in Germany you can’t move for Mercedes, BMWs and VWs.

In Sweden you would be forgiven for thinking that there is a Volvo on every drive. (Actually, Volvo is now owned by a Chinese corporation and for the first time in 50 years in 2017 Volvo was outsold in Sweden by an import – a VW Golf!). 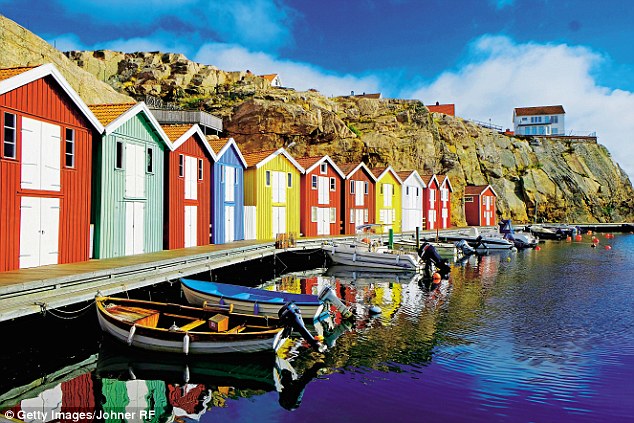 Catch of the day: Traditional fishermen’s houses on the shore at Smogen

Volvo, however, along with ABBA and IKEA remains the quintessential Swedish experience.

So to experience the quintessential Sweden, if you take a fly-drive break a Volvo can be considered essential (fortunately among the local car hire companies the Volvo range is very well represented!).

So why not start the trip at Gothenburg, the home of Volvo. Our first port of call was the Volvo museum where a series of exhibits place the development of this stalwart automobile at the beating heart of Swedish life ever since the company was set up in 1927 (not just a manufacturer of cars but also lorries, coaches and other work horses).

Interestingly, pride of place is claimed by the Volvo P1800 – a sleek sporty model personally owned by Roger Moore. This was the car – with the registration ST1 – that his character Simon Templar drove in Sixties TV series The Saint. (it seems slightly unpatriotic that the museum couldn’t have found space to mark the Volvo driving activities of Europe’s most depressed detective: Inspector Wallander.)

Volvo (from the Latin ‘I roll’) is generally seen as a famously unspectacular motor car – the sort of safe choice that might be expected to earn the scorn of genuine petrolheads.

Sweden, however, is a place where there are plenty of routine dramas posed by the climate and the wildlife. In the winter snow and ice is an ever present prospect – more scary are the 6ft tall 300kg elks which may choose to leap out in front of you on a forest road (new cars have to pass the Elk Test to ensure they can manoeuvre out of danger).

Given that 90 per cent of accidents are caused by human error, it is probably not surprising that Volvo’s drive to improved safety has meant that its newer – and more expensive models – practically drive themselves.

After paying homage at the Volvo Museum we headed our V90 north on the E6 motorway (this runs for 1500 miles from Trelleborg via Oslo to Kirkenes in the very north of Norway, adjacent to Russia (so far to the east, incredibly, that this point in Norway is further east than Istanbul). We weren’t heading that far. Our destination was an area that really ought to be called the Gothenburg Riviera.

With adaptive cruise control and ‘Pilot Assist’, the V90 practically drives itself – activate the appropriate functions and the car automatically follows at a safe distance from the car in front – accelerating and braking to maintain speed and distance; it will also keep the car on track around bends (you do have to keep your hands on the wheel and stay alert!) I nicknamed our unseen pilot Vee. 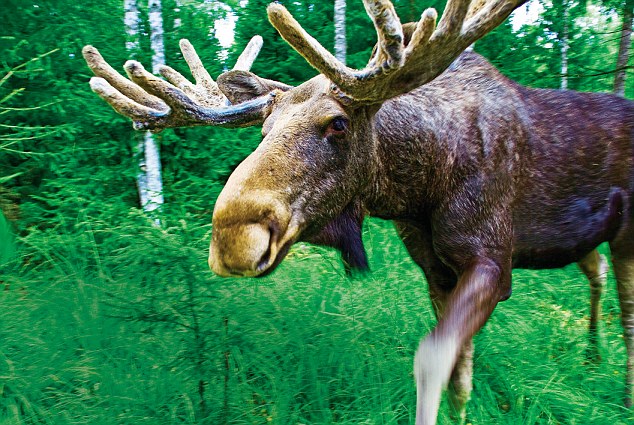 Elk and safety: Drivers are warned to watch our for the 660lb forest residents

About 30 minutes north of Gothenburg it was time to turn off ABBA’s Greatest Hits (second best selling album of all time in the UK) and make another Swedish pilgrimage: this time a visit to the Backebol branch of IKEA. Unnervingly at 10am on a Tuesday morning the place was deserted in a spooky sort of post-apocalyptic way.

The thing you have to get used to in Sweden is the lack of people (it is the 50th least densely populated country in Europe, compared with the UK which is in tenth place).

Our destination was the Bohuslan coast, a popular summer break destination with Gothenburgers, yet we hardly passed another car. Disappointing for our automatic pilot Vee who liked having a car to follow at a respectful distance.

Our first stop was the picturesque fishing village of Smogen which was sweltering in the August heatwave. We checked into the attractive Smogens Havsbad, a delightful late Victorian hotel. We headed to the harbour for a cup of tea and a cinnamon whirl. Set around the harbourside boardwalk are a swathe of colourful shops and restaurants – all stylish and utterly charming.

Fjallbacka, 25 miles to the north – is famous as the setting of Camilla Lackberg’s Scandi Noir crime fiction. Here we found ourselves among a mini throng of Chinese tourists. Were they lured by Lackberg’s noir writing. More likely they were attracted by the fact that this was the place where actress Ingrid Bergman passed through en route to her nearby holiday island. Oh to be the owner of a Fjallbacka bar when Swedish-born Ingrid popped in for a reviving beverage: ‘Of all the gin joints in all the towns in all the world,’ he could have said: ‘You walked into mine.’

We finished our Vee-shaped short break in Gothenburg, Sweden’s second biggest city and a much more charming place than you might guess at first glance. We stayed in Lindholmen on the northern side of the Gota river. The area has been developed as a technology park – an unlikely sounding place to stay. But a free ferry runs regularly from here for the ten minute ride across the river to the one of the most interesting parts of the city.

Haga is a fascinating area of traditional wood buildings and cobbled streets, home to 17th-century fortress Skansen Kronan. We had the best meal of the holiday – and probably the year – at the En Deli Haga vegan café. Good food and interesting shops selling everything from local crafts to knitwear.

The only regret was that we couldn’t bring Vee on the passenger ferry. It was a sad moment when we had to bid farewell to her at the airport. I’d got too used to somebody doing all the driving for me…

For information on the new Volvo V90 click here.

Find out more on West Sweden online at www.westsweden.com and Gothenburg at www.gothenburg.com. Flights are available from London to Gothenburg with British Airways starting at £36 one-way and Norwegian starting at £29.80 one-way. Three nights hire of a Volvo V90 estate costs from £290 with Hertz (www.hertz.co.uk).

13 Wild Outdoor Adventures You Can Only Experience in Australia