There are few countries like it. In the winter, you can go skiing in the morning in the north, and by evening be sitting on a warm beach with a cocktail in the south.

You can enjoy world-class nightlife in one of the world’s most liberal cities, or spend the day at the most vibrant – and conservative – religious sites on earth, whether Jewish, Christian or Muslim.

I speak, of course, of Israel, where my fiancee Roxanna and I recently spent a week. The country can get bad press for a variety of reasons, and many who haven’t visited think of it as a perpetual war zone. Nothing could be further from the truth. 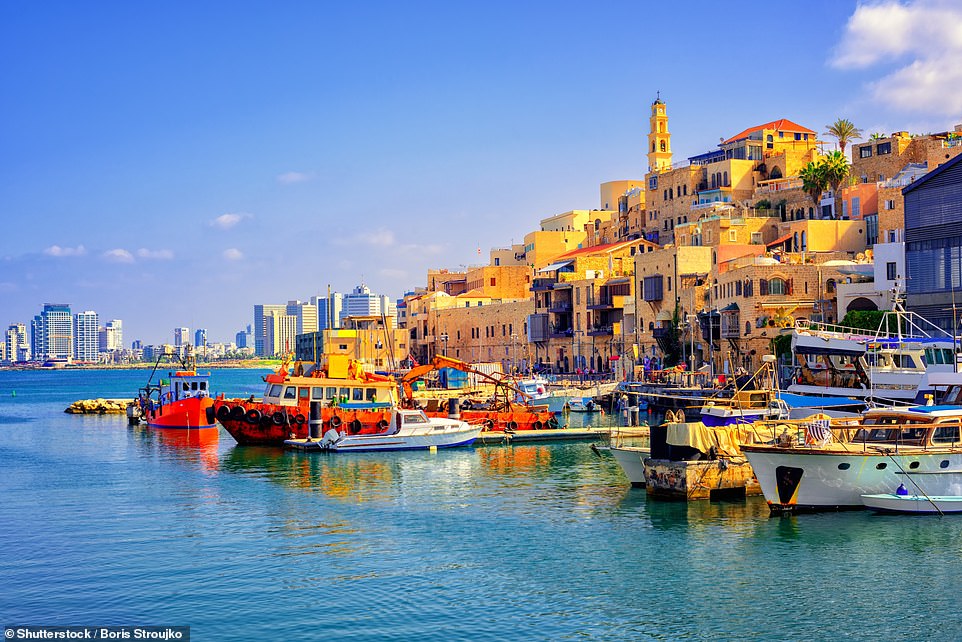 Jake Wallis Simons and his fiancee Roxanna started their week-long trip around Israel in Tel Aviv. Above is the city’s ancient Jaffa Port

We’d signed up with a bespoke tour company called Israel Destination, about which more later. But for the first few days, we went it alone.

The first port of call was Tel Aviv. We checked in to the luxurious Debrah Brown hotel, a short stroll from the beach. Our high-end, bijou room was on the top floor – through the floor-to-ceiling windows could be seen a vista that was both European and Arabic in flavour. Welcome to Israel.

That evening, we started on the food. Israel has become known as one of the world’s most exciting centres of cuisine, whether that’s vegan creativity in Tel Aviv, Middle Eastern fusion in Jerusalem, or a hummus bar by the side of the motorway that you’ll tell your friends about.

Our first restaurant of the trip, Opak, lay nestled in one of Tel Aviv’s bohemian alleyways in the hip Levinsky Market. Its vibe was effortlessly cool. We sat at the bar and embarked on a 10-course vegan tasting menu that was as surprising as it was delicious. 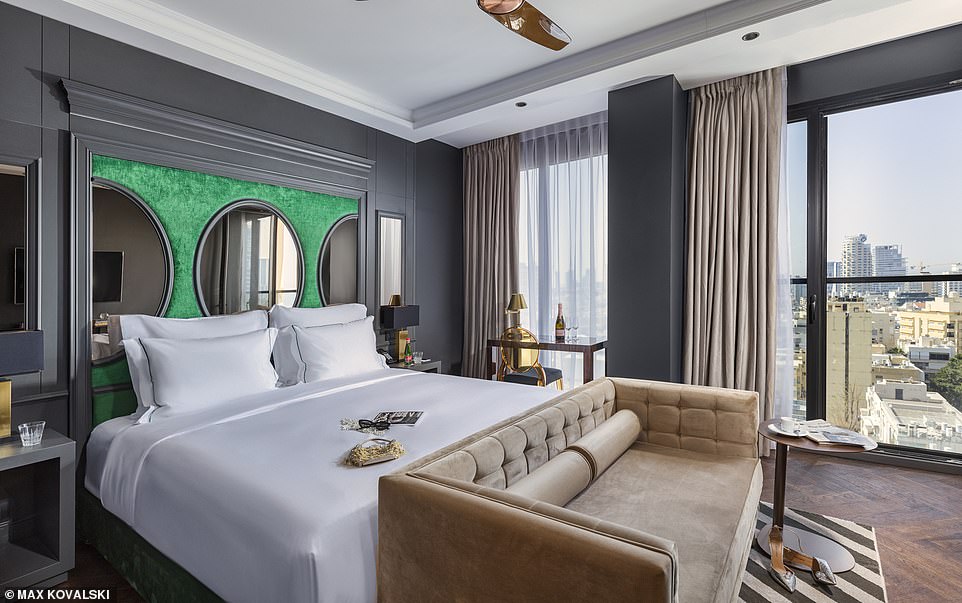 Jake and Roxanna’s first port of call was the luxurious Debrah Brown hotel, pictured, a short stroll from the beach in Tel Aviv 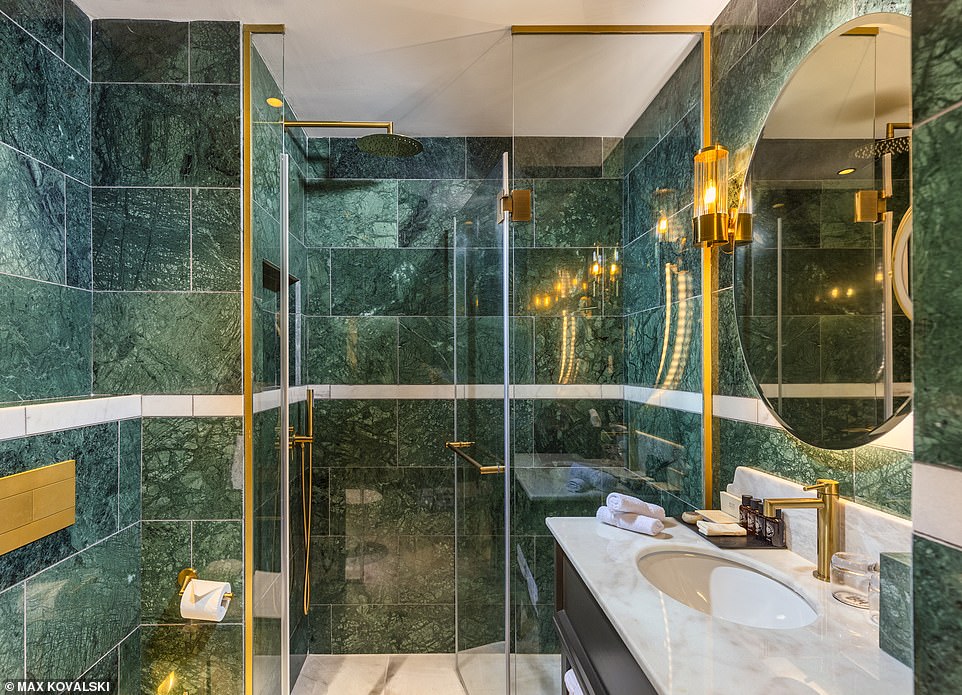 Above is one of the bathrooms in the Debra Brown Hotel’s Deluxe Rooms. According to Jake, the view from the hotel is ‘both European and Arabic in flavour’ 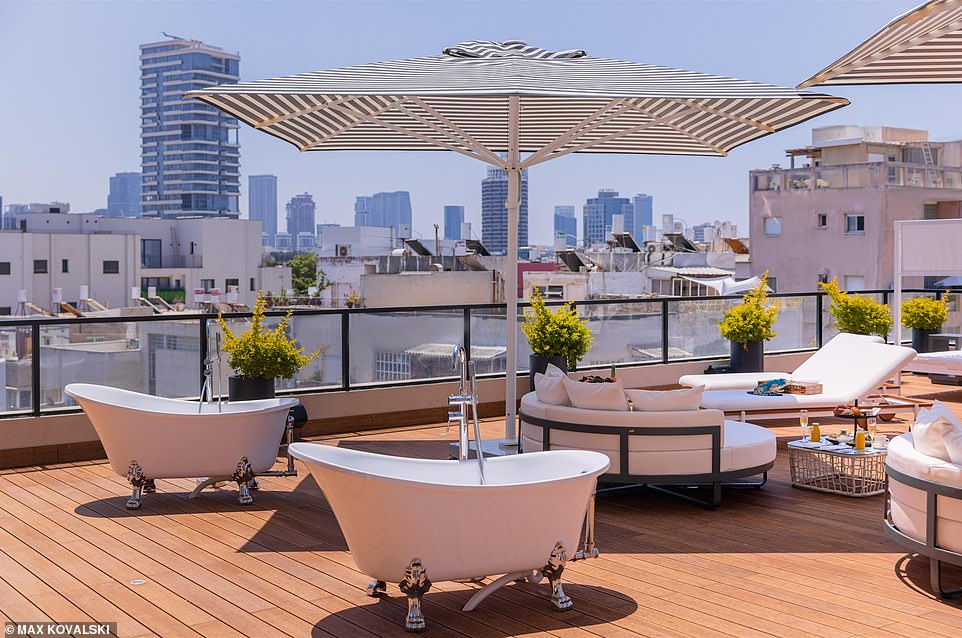 Jake enjoyed ‘a sumptuous breakfast on the Debrah Brown roof terrace’, pictured above

It was the most extraordinary experience, where none of the usual rules of food seemed to apply. We went to sleep in the silent splendour of the hotel, both satisfied and blown away by the culinary creativity, and awoke to broad Mediterranean sunlight.

After a sumptuous breakfast on the Debrah Brown roof terrace, we spent the morning on the beach. Deciding to take things slow, we went on to spend the afternoon on the beach.

In the evening, we plumped for another vegan restaurant – vegan is all the rage in ultra-hip Tel Aviv – called Meshek Barzilay. We ate outside and it was post-Covid busy.

The atmosphere was a bit less esoteric than Opa, and the food more straightforward, with an eclectic menu of burgers comprised of mushrooms, lentils, tofu and nuts; black rice noodles with coconut curry; pumpkin steak curry; and black garlic and artichoke tortellini in coconut cream. I’m a meat-eater, but I loved it.

The next day, we decided on a hotel crawl and shifted over to a majestic place called the Norman. Located downtown in an elegant, turn-of-the-century building, the hotel was full of discreet, responsive staff and fine attention to detail. It seems silly to say this out loud, but it all seemed very… aromatic. 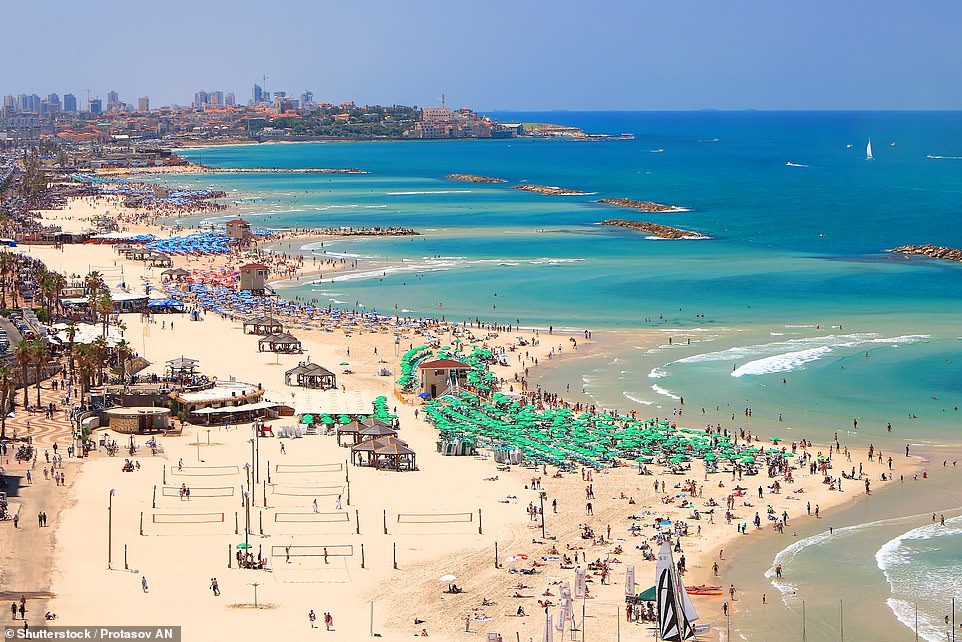 Tel Aviv’s picturesque coastline. ‘Deciding to take things slow, we went on to spend the afternoon on the beach,’ says Jake 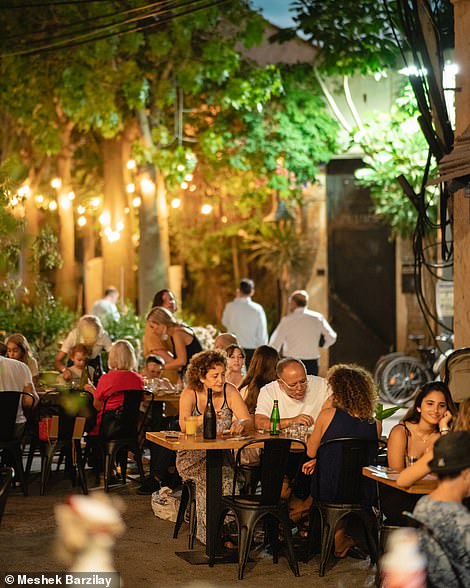 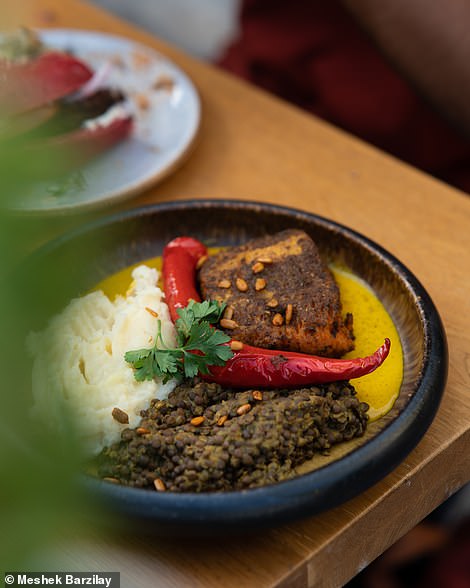 Jake dined at the vegan restaurant Meshek Barzilay in Tel Aviv, pictured on the left, which has an eclectic menu of burgers comprised of mushrooms, lentils, tofu and nuts. ‘I’m a meat-eater, but I loved it,’ he says. On the right is one of the eatery’s vegan dishes 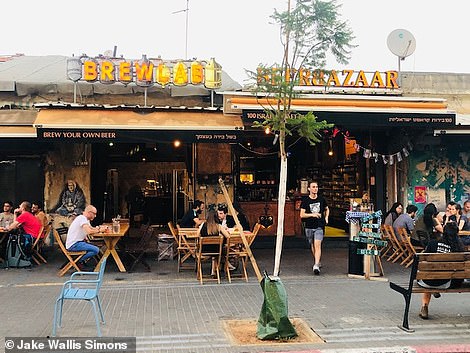 On the right is BeerBazaar, a hipster beer emporium in Jaffa

We booked a table at the Norman’s dining room, but beforehand we visited BeerBazaar, a hipster beer emporium in nearby Jaffa. A tasting board seemed to be the way to go. This was a piece of wood with small glasses sitting in holes, each holding a different beer to taste.

While drinking, we fell into conversation with a chap who had invented a Nespresso-style machine for ice cream. Turn it on, insert a flavoured pod, push the button, and out squirts your Mr Whippy, he enthused. In Israel – the ‘start-up nation’ – everybody seems to have a side hustle. I wish I’d invented that, I told him.

The dining room at the Norman was comfortable and rather more traditional than the vegan places we had tried hitherto. I was gasping for meat, which was excellent. And for the first time, I tried a white Negroni. Recommended.

The next day, having arrived at a state of welcome unwindedness, the time had come to explore. Having hired a car, we braved the Israeli traffic and headed north to the ancient Crusader city of Acre, a majority-Arab town. 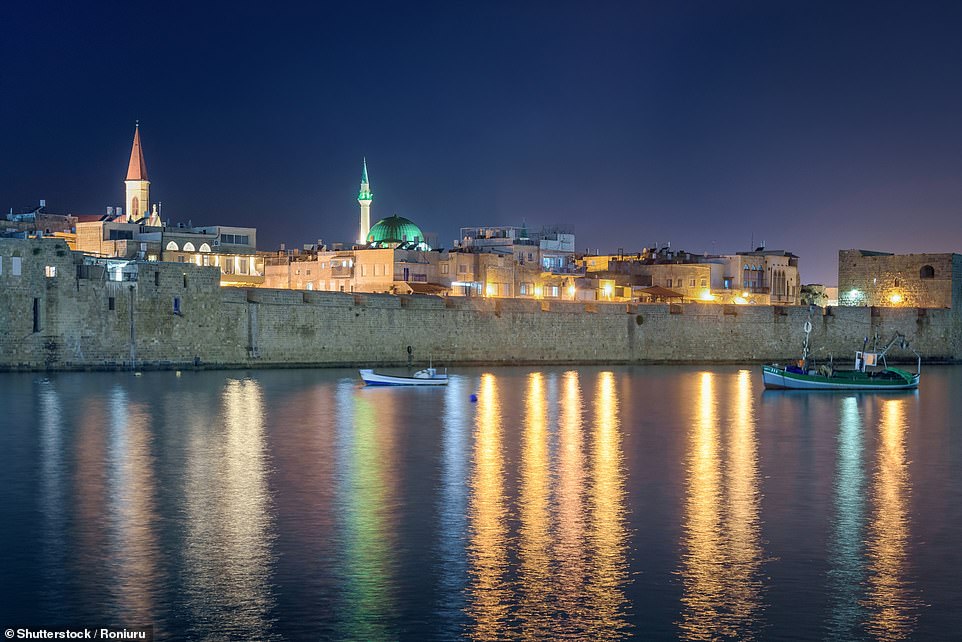 After Tel Aviv, the ancient Crusader city of Acre was Jake and Roxanna’s next port of call – a Unesco World Heritage city 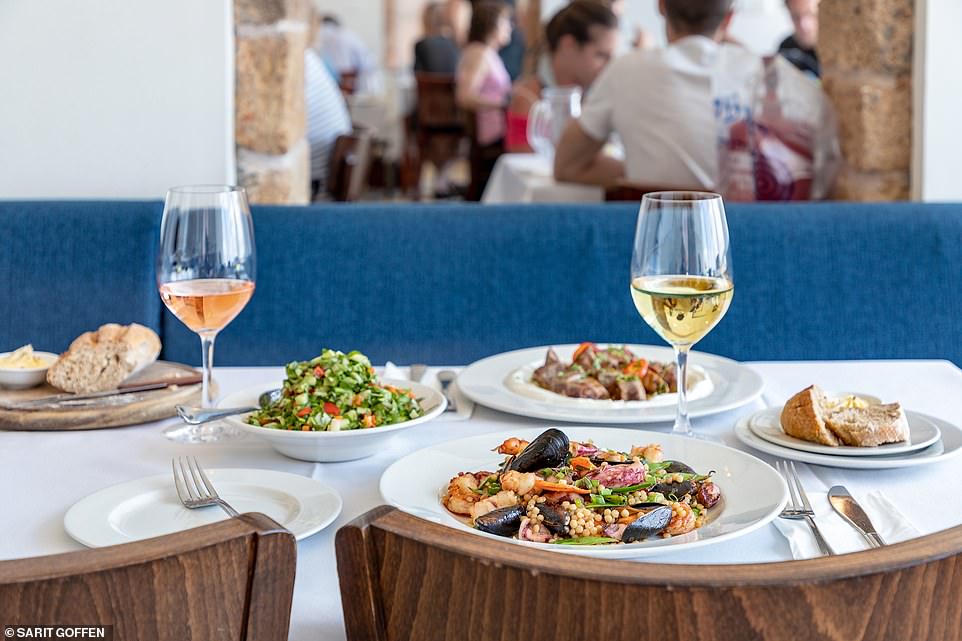 Above is a spread of food at Uri Buri, one of Israel’s most famous restaurants, which overlooks the Mediterranean in Acre 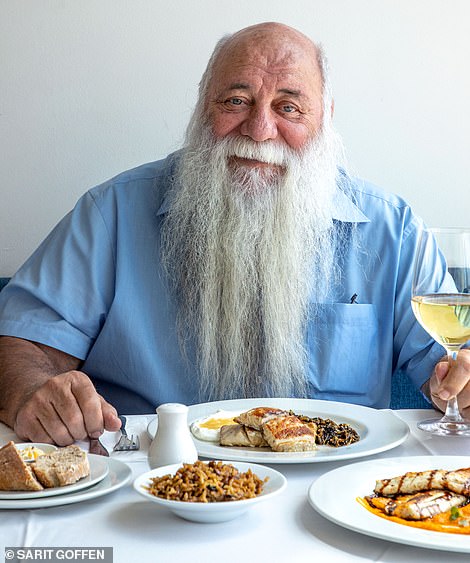 Uri Buri (pictured) joined Jake and Roxanna for their meal, taking them through a tapas array of ‘delicious fish and seafood dishes’

But on the way, we stopped for lunch at one of Israel’s most famous restaurants. Only it wasn’t. I speak of Uri Buri, the renowned seafood place overlooking the Mediterranean in Acre.

Sadly, this hub of cultural interaction was destroyed last spring by mindless rioters. We visited the pop-up version that had been hastily erected in an office block on the outskirts of the city.

Uri Buri himself, an elderly, easily-laughing man with a huge white beard, joined us at table, taking us through a tapas array of delicious fish and seafood dishes, culminating in an aniseed sorbet to cleanse the palate.

The informality and improvisation of his approach shone through as he introduced the dishes as they occurred to him, through the course of conversation. Bookings are hard to come by: get one.

That night we stayed at the Zidan Sarai Suite in central Acre, an evocative apartment adapted out of thousand-year-old walls, complete with its own Hammam.

In the morning, refreshed, we opened the door to the ancient vista of a Unesco World Heritage city. After an extensive Arabic breakfast at the family-run, seafront Al Fanar cafe, we plunged into the crusader tunnels, led by a knowledgeable guide called Omri, and visited the Hospitaller Fortress and Knights’ Halls. 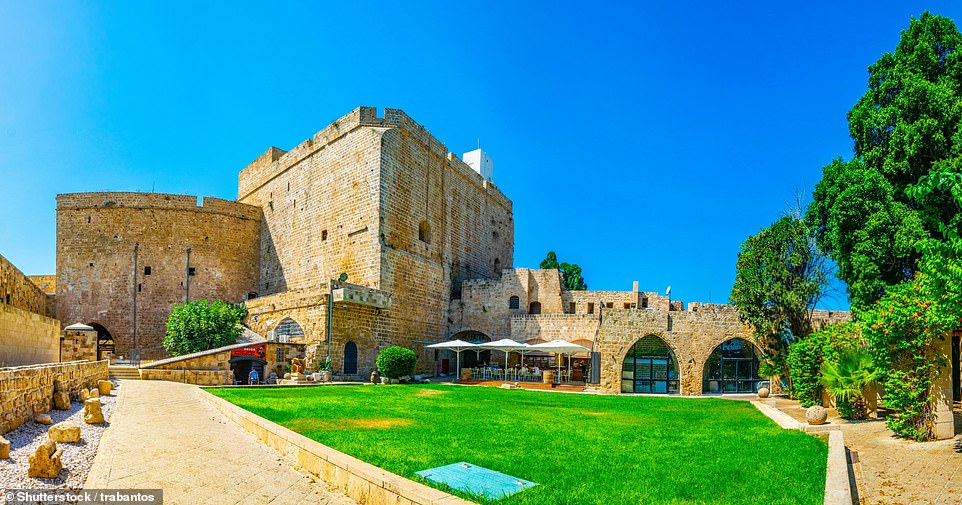 Jake describes Acre’s Hospitaller Fortress, pictured above, as an ‘archaeological marvel’ that brings you ‘as close to the life of the crusaders in the 12th and 13th centuries as it’s possible to get’

These archaeological marvels get you as close to the life of the crusaders in the 12th and 13th centuries as it’s possible to get. The vaunting stone arches, magnificent halls, ancient tunnels and beautiful squares truly take you back in time.

That evening, we partied at the rooftop Sama (‘sky’ in Arabic) Bar in Acre. The owner, the ebullient Hamudi Barghot, pointed out the sites as we sipped cocktails and the sun went down: minarets, Ottoman architecture, an ancient caravanserai, the sea.

The following day, after a detour to see Jesus’ birthplace at the Church of the Nativity in Nazareth, we motored south to Jerusalem and met up with uber-tour guide Yair Jablinowitz, a 100-watt battery of positivity and energy who was to lead the rest of our trip.

His company, Israel Destination, tailor-makes holidays and tours that cater for groups of all sizes, ages and types of interest. 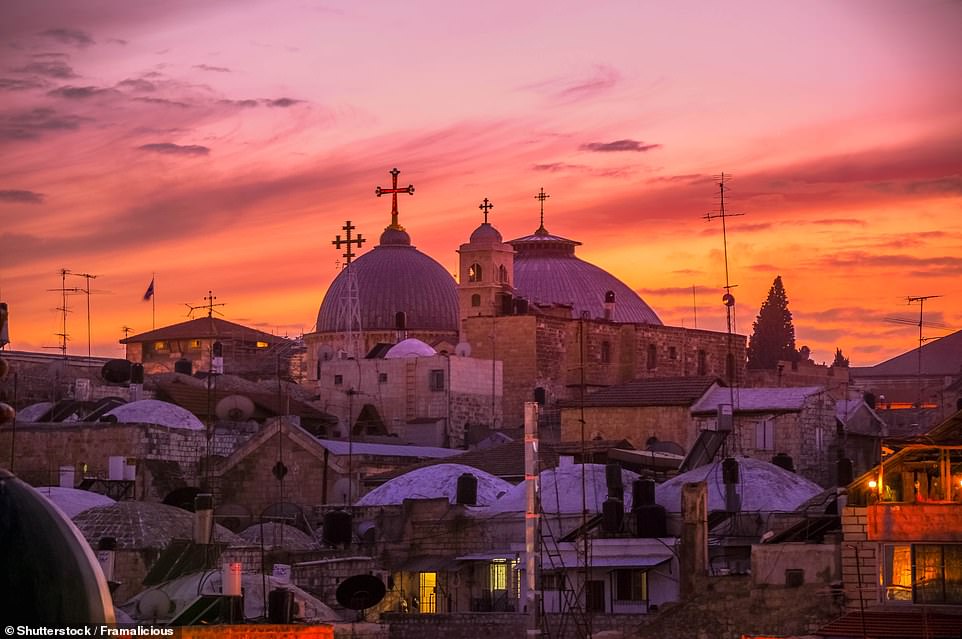 A visit to the ‘dark and ornate’ Church of the Holy Sepulchre, pictured centre background, featured on the couple’s tour

The rest of the day was spent in the Old City, visiting the dark and ornate Church of the Holy Sepulchre – where Christ was said to have been crucified – and the Western Wall. Roxanna had not been to Israel before, and was moved to tears by the holiness of the place.

After a night at the Herbert Samuel hotel, an oasis of peace with spacious rooms in the very heart of downtown Jerusalem, we awoke before dawn and stumbled downstairs to meet Yair outside.

Beaming with enthusiasm, he drove us to the Dead Sea with Bruce Springsteen’s Dancing In The Dark blaring. We caught up on our sleep in the back.

The early start was worth it. We rendezvoused with Netanel Schlesinger, who lives close to the Sea and knows it like the back of his hand. 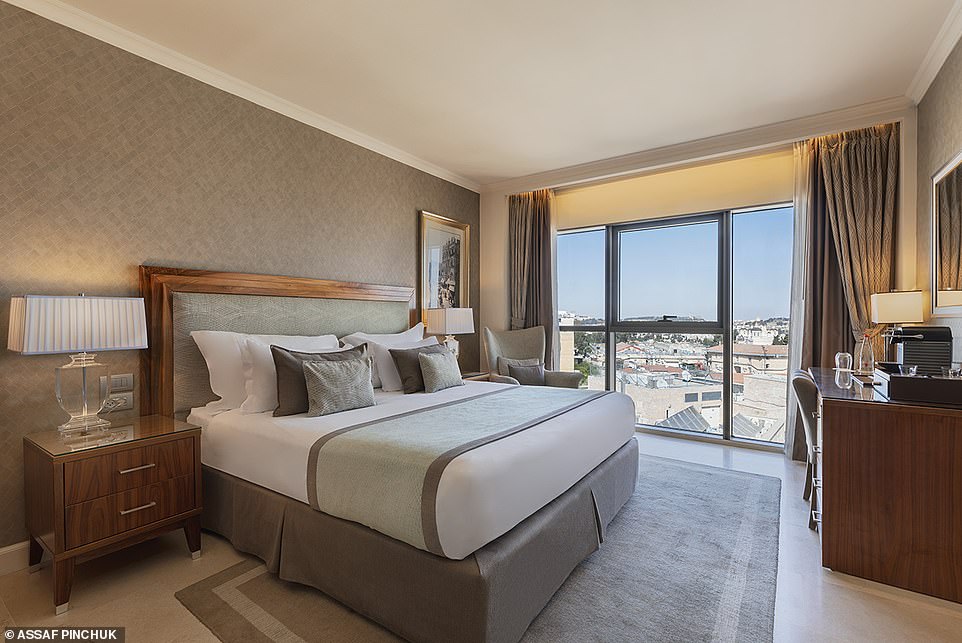 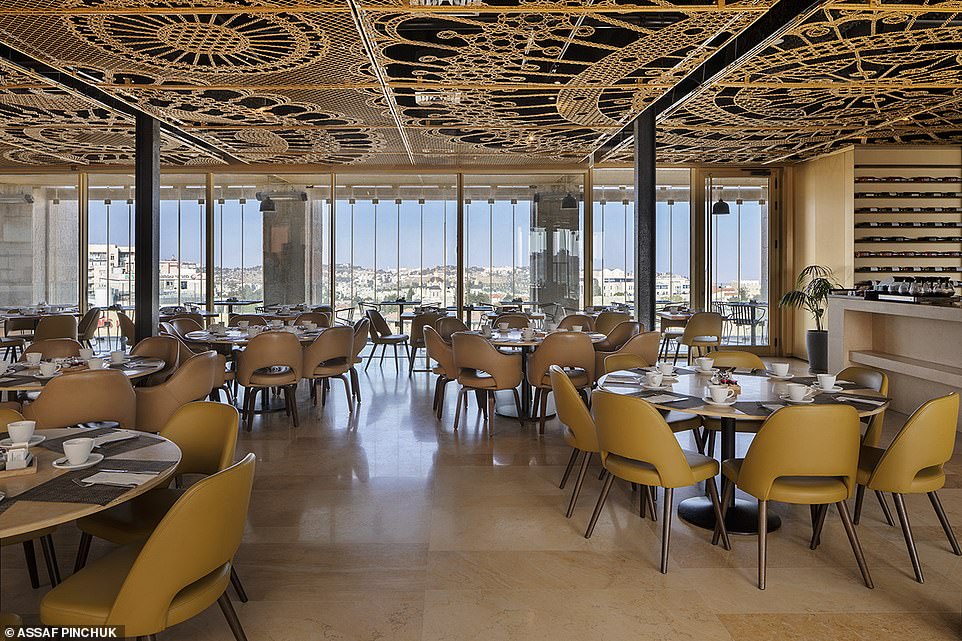 According to Jake, the Herbert Samuel hotel, pictured, is ‘an oasis of peace with spacious rooms’ 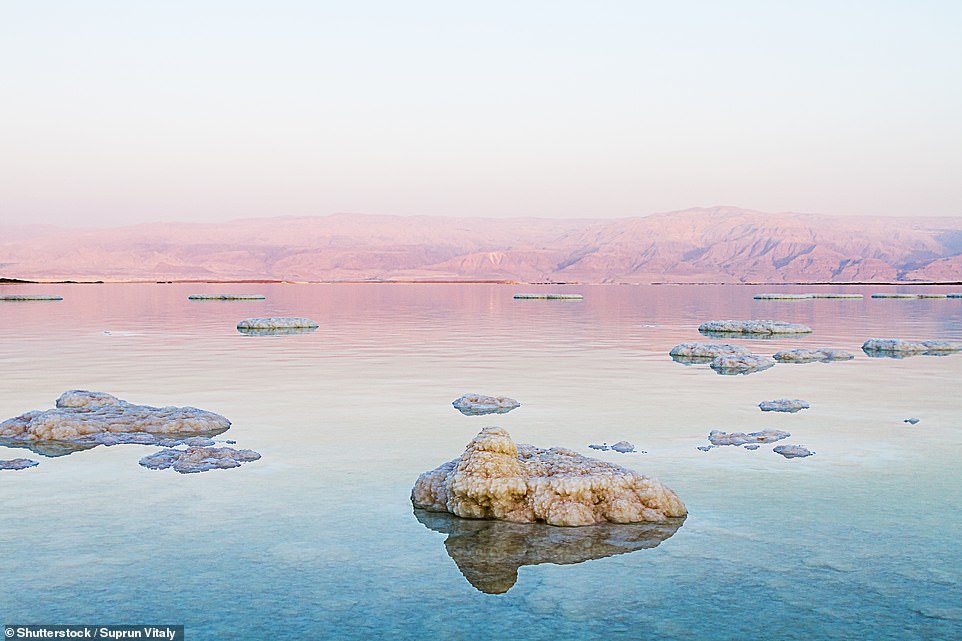 A view of the Dead Sea in Israel. Describing his visit to the famed body of water, Jake says: ‘We cycled down to a little-known part of the saltwater phenomenon untroubled by other tourists and floated on its surface as the sun came up’

After hiring bikes in the early dawn light, we cycled down to a little-known part of the saltwater phenomenon untroubled by other tourists and floated on its surface as the sun came up.

Next came Masada. This ancient fortress high on a mountain in the Judaean Desert is a key site in Jewish identity. In 74AD, almost 1,000 Jewish rebels committed mass suicide rather than submit to the Roman invaders.

We ascended by cable car. The growing morning was sweltering. Having got up so early, it felt like it should be the afternoon. The view of the desert was magnificent, and the outline of Roman fortifications could still be seen. Eagles soared below us. 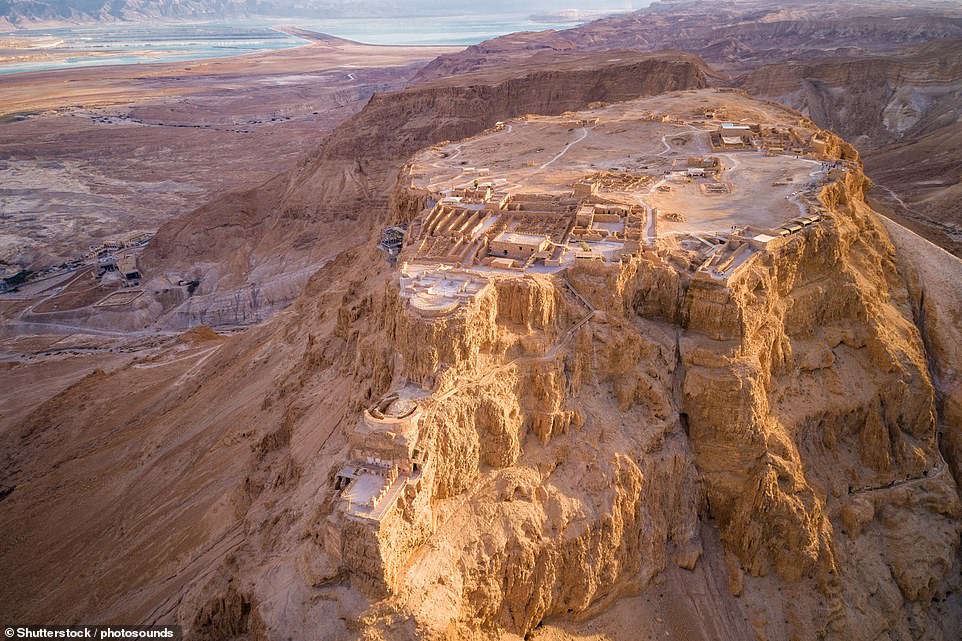 The ancient fortress of Masada, pictured, is a key site in Jewish identity, Jake explains 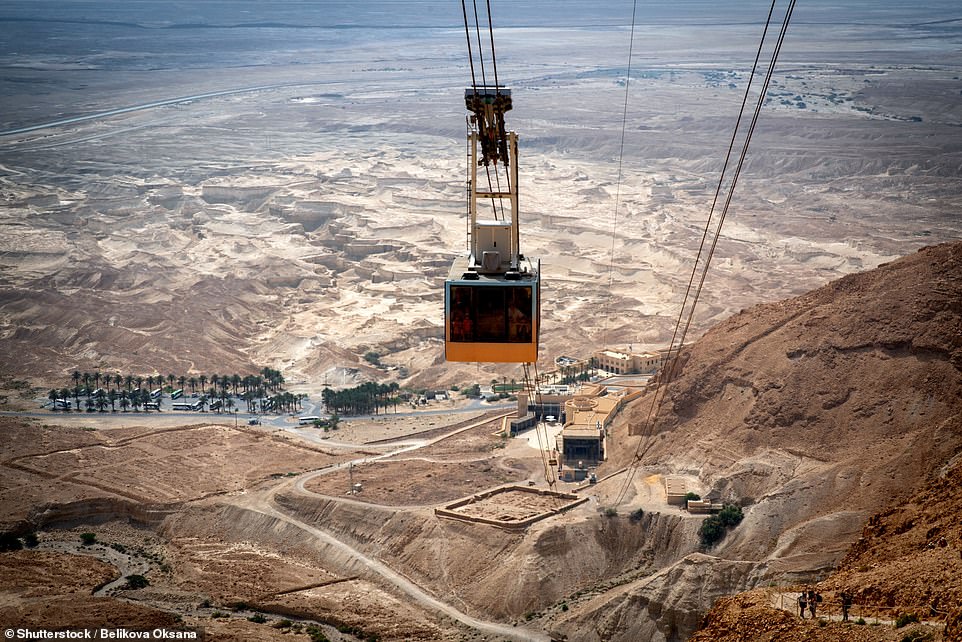 Jake and Roxanna reached Masada by cable car. ‘The view of the desert was magnificent,’ he says 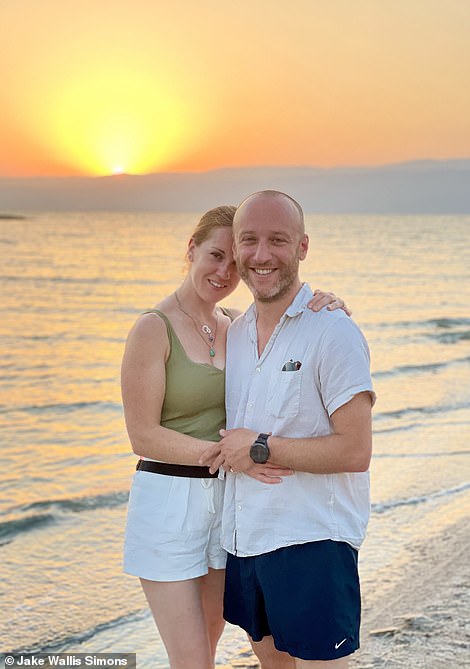 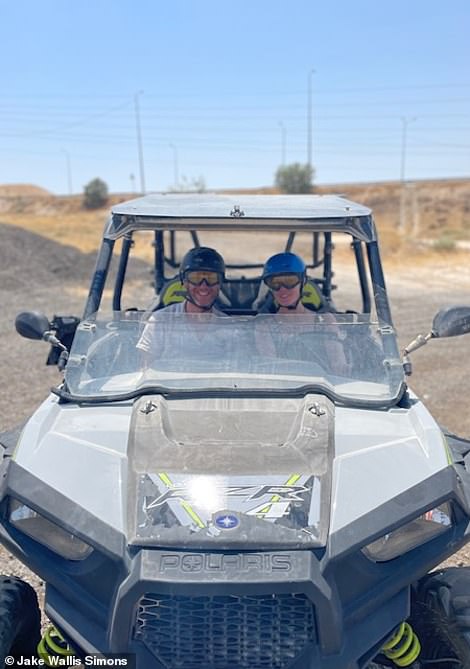 ‘There’s no country in the world like it,’ Jake, pictured above with Roxanna, says of Israel. The picture on the right shows Jake and Roxanna setting off on an off-road buggy drive through the desert – their ‘final adventure of the trip’

Our final adventure of the trip was an off-road buggy drive through the desert. Roxanna, who has a passion for driving, took the wheel and we careered down dusty mountain paths, through wadis and across plains, stopping on the way for a dip in a sheltered pool.

That evening, the last one of our trip, we stayed at the palatial Waldorf Astoria, which was every bit as luxurious as its reputation suggests. But first we had dinner at Machneyuda.

As with Uri Buri, as one of the best-known restaurants in Israel, it is hard to get a table at Machneyuda, but well worth it. The atmosphere alone makes it a night to remember. This is a place where waiters sing into the air as they deliver your food, and down shots of arak with you while taking selfies (our waiter did, anyway).

It was a vibrant send-off after a truly unique and memorable week. From food to culture to archaeology to outdoors adventure: where else in the world would you be able to have a range of experiences like that? And with five-hour flights costing as little as £100, it’s not much further than Europe.

Now that the borders are fully open and Covid is behind us, I recommend giving Israel a try. There’s no greater variety anywhere else on earth.

Tours of all lengths, all over the country, with the bespoke tour operator Isreal Destination can be found at IsraelDestination.co.il.

Specialist tours of the ancient crusader city of Acre can be found at omri-travel.co.il.

Help your clients explore the world ·