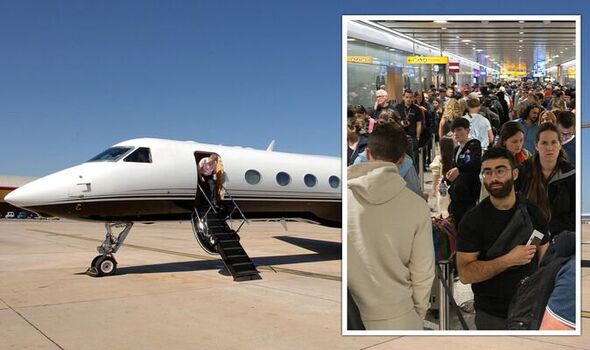 Research from the private-jet hailing app TailHail showed that 25 percent of Britons are willing to share the cost of a private jet with friends and family to avoid long queues and potential cancellations. Two passengers who used TailHail app to book a private plane after their flight was cancelled shared their experience with Express.co.uk.

The British travellers, who wished to remain anonymous, had to attend a wedding but their flight was cancelled due to the ongoing airline disruption.

One of the passengers explained: “Honestly, the airports in the UK have been an absolute mess and it nearly caused us to miss a wedding that had already been rescheduled twice because of Covid!

“Me and my husband were travelling from London to the Balearic Islands and after experiencing several hours delay our flight was cancelled out of the blue – without even the mention of a refund.

“We were absolutely gutted when we found out there was no other flights to make it there on time.

“I remember having seen an ad online for private jets – which I thought was funny at the time because never in a million years would I have even considered getting on a private flight, but I was honestly hell bent on getting to this wedding!

“I sent an inquiry and the team at TailHail got back to me almost immediately with an array of flight options.”

Another one explained: “I had an impromptu and very important business trip to sort out and just thinking about all this fuss at the airports I began to browse for alternatives. I came across TailHail’s website – it was more out of interest to view it initially.

“I hadn’t considered booking a charter before, but after looking at the options to travel via car and the overnight stays for my trip, the similar price that was offered via TailHail was just a quarter of the journey time. From a business perspective it was much more efficient for me.”

Flying private is a dream for many but according to James Moon, chief aviation officer of TailHail, more people than ever have been choosing this option in the last few weeks.

But how much does it cost to fly private?

According to TailHail, flying on a private plane from London to Majorca, in Spain, can cost a couple between £5,000 to £6,000 one way or £12,000 return. Travellers can always share the plane with friends and family which would cost them around £1,500 per person return (on an eight-seater aircraft).

Booking a private plane with TailHail is easy. The platform has over 10,000 routes, and more destinations available than commercial airlines.

Travellers can simply hail a private flight to their nearest available airfield, to be ready within 24 hours, and share the cost with colleagues or friends.

James Moon, Chief Aviation Officer of TailHail, commented: “The aviation sector is facing challenging times – an array of factors such as Brexit, Covid and the Ukraine crisis has led to severe staff shortages and an impact on oil prices which has caused flight prices to soar.

“This alongside a surge in demand has left the UK travel sector scrambling.

“The UK travel sector has failed countless Brits travelling abroad for the first time after a two-year hiatus riddled with Covid restrictions as thousands have been affected by cancellations and delays, this trend will persist throughout the year as hiring airport and airline staff is a long process for a demanding job.

“Brits that had to travel home or abroad for an emergency were stuck without having an alternative to resort to, this is where TailHail will use technology to revolutionise the travel sector.

“We saw a market opportunity to use technology to lift the curtain on what has always been an exclusive service, for those who are willing to spend more to avoid long queues and uncertainty.

“Through our platform and unique algorithm users will be able to see a wide range of aircraft readily available, by creating automation on the booking process, users will have access to numerous flight options including empty leg flights – which can reduce the cost of flying by up to 40 percent.”