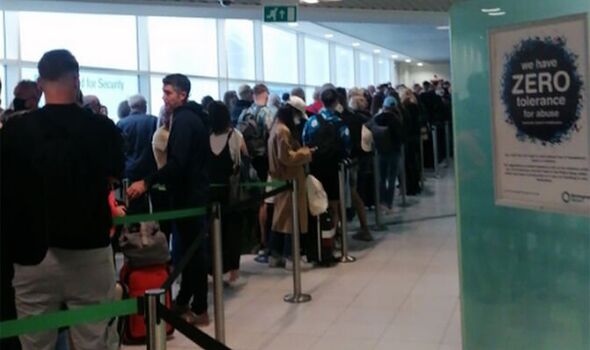 It’s believed some passengers have even missed flights at Birmingham and Manchester Airports. One woman and her party of around 30 friends had hoped to fly from Birmingham to Dublin, Ireland, this morning but the plane left when they were in security. The tourist, who is a student, tweeted: “About 30 of us didn’t make our flight – didn’t even make it through security.”

Kristian Walsh, who left from the hub to Spain, said: “Manchester Airport is like the Hunger Games here.”

Terminal One is impacted by staff shortages.

Another person tweeted: “@manairport need to fix up, 4 baggage desks and 4 security desks open in Terminal 1, hundreds of people queueing out into the car park for over 2 hours, the staffing levels aren’t equipped for the volume of passengers you have going through the terminal, please sort it out.”

And the chaos in the second city represented the second day of delays at the hub following queues and missed flights throughout Sunday, Birmingham Live says.

Couples, elderly people and families were among those left “losing their minds” yesterday.

Workers reportedly put the lengthy delays down to “staff shortages and sickness”.

Rebekah McLoughlin, who missed her flight also to Dublin on Sunday May 2, said: “I arrived at the airport for 6am for the 8.10am Ryanair flight to Dublin. Queue started from jet2 check-in on ground floor and I was waiting until 8am.

“I asked staff members a number of times about my flight especially when it was nearly 8am and I was still queuing. We were called around 8am to skip the queue to go through security as I was putting my bags through I was told the flight had left.

“I ended up having to go through security and was told to ring swiss port for assistance and there was no answer. I’ve bought a ticket to return to Dublin later today which cost me 170 Euros.

“I understand the staff were under pressure but it was difficult to ask them anything as they would say that they would call us, however they left it very late to call us.”

Birmingham Airport said it had a busy start to the day on Sunday with “more than 13,000 customers due to fly out of BHX”.

A spokesman said: “We thank everyone for their patience and understanding. We will look into the circumstances of anyone who missed their flight.

“As always, our message to departing customers is: Help us help you keep queues moving by removing any liquids, gels, pastes and electrical items from your bags before our security x-ray scanners.”

You Could Get Paid $97,000 a Year to Visit Private Islands and Test Luxury Cars, Jets, and Yachts

Japan has world’s most powerful passport