My four-year-old son was ready to meet Santa Claus. I wasn’t sure if Santa was prepared for the ordeal of meeting him.

Nicholas is going through a hooligan phase. So I felt nervous when, after arriving at Santa Claus Village in Finland, we were ushered into the great man’s presence. There he sat in all his glory, red of coat and round of belly, his ruddy cheeks gleaming above curly white hair.

‘And what would you like for Christmas, young man?’ he asked my hyperactive son. 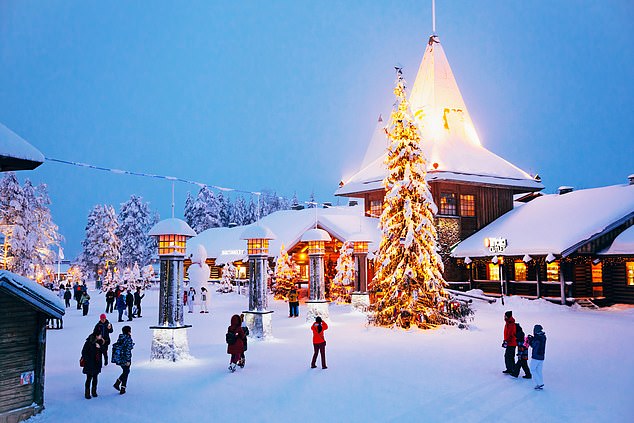 Santa twinkled. He had met such children before.

Mortified, I murmured the truth into a whiskery ear.

The history of Santa Claus Village goes back to 1950, when former U.S. first lady Eleanor Roosevelt visited Lapland, the frosty, forested region that makes up the northern third of Finland. She wanted to meet Santa, so locals knocked up a Santa hut. The attraction grew. Four decades later, the Village opened, offering — 365 days per year, including Christmas Day — what Lapps say is the world’s best Santa experience.

After our meeting with Santa, Nicholas and I visited his Main Post Office and sent postcards to our loved ones, stamped with the Arctic Circle postmark. 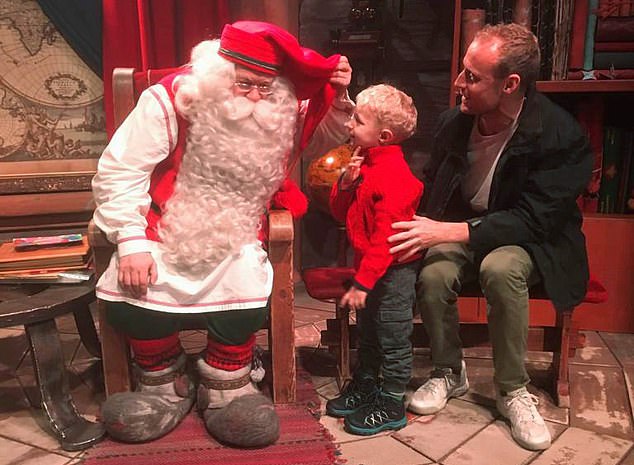 Naughty or nice? The big man meets Nicholas and dad Thomas (above)

Even more than Santa, reindeer are the cultural symbol of Lapland. There are more of them in the region than humans.

The biggest town, Rovaniemi, which was levelled by bombing in World War II, was rebuilt on a plan that resembles the head of a reindeer.

Tasty reindeer stews and soups are served in most restaurants, and gift shops sell almost anything you can imagine made out of antlers. At first, I felt sorry for all these reindeer getting the chop to make chandeliers.

Then I learned the truth: no deer dies in the name of antler ornaments. The males drop their antlers naturally after each mating season. I bought half a dozen antler bottle-openers and thought to myself: that’s Christmas sorted.

In the afternoon, Nicholas and I visited Santa’s (frankly overpriced) Secret Forest, where two elves — young Lappish men sporting prosthetic noses — taught us to do mildly interesting things with gingerbread.

Their elfin patter was pretty tedious, but they had a trick up their sleeves. In their workshop, after showing off the ‘flying reindeer radar’ and ‘kind-ometer’, they slid back a panel to reveal … Santa Claus again!

Then we climbed back on our Santa Line bus to return to our hotel in Rovaniemi. The name? Hotel Santa Claus, of course. 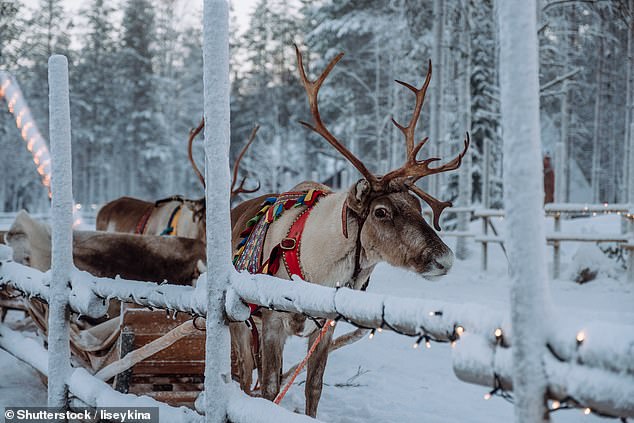 Magical: Visitors can take a reindeer sleigh ride through the snow

The bottom line is: there could hardly be a more exciting holiday for a four-year-old than a trip to Lapland’s Santa Claus Village.

It’s simple to get to, now that easyJet has launched bi-weekly direct flights from London Gatwick to Rovaniemi, which is just a few kilometres south of the Village. There are also lots of non-Santa-related things to do.

In the Arktikum museum, you’ll learn about the Northern Lights and the indigenous Sami people of the north, who have been oppressed by rapacious southerners.

The Ranua Wildlife Park has two lumbering polar bears, a grey wolf, a vicious wolverine, and owls. At the Bearhill Husky Farm, you can enjoy a helter-skelter sleigh ride, dragged by Arctic Huskies.

On our last morning, Nicholas and I fitted in a Finnish experience. We crossed the bridge and took a dip in the icy River Kemijoki. It’s a local tradition, good for your heart and treating a range of ailments. Nicholas said he wanted to do it. I warned him, but he insisted.

So I carried him down the wooden steps and dunked him in the freezing water. The next few minutes were the only time he was silent on the entire trip.

EasyJet (easyjet.com) flies to Rovaniemi on Sundays and Wednesdays, from £32.76 pp one way. Double rooms at Hotel Santa Claus from £113 b&b. Entrance to Santa Claus Village (santaclausvillage.info) and Santa visit is free (photos £35). Reindeer sleigh ride (santaclausreindeer.fi) from £12.50 to £57 based on age and duration.

Change is in the air at the Hotel Adlon Kempinski Berlin ·