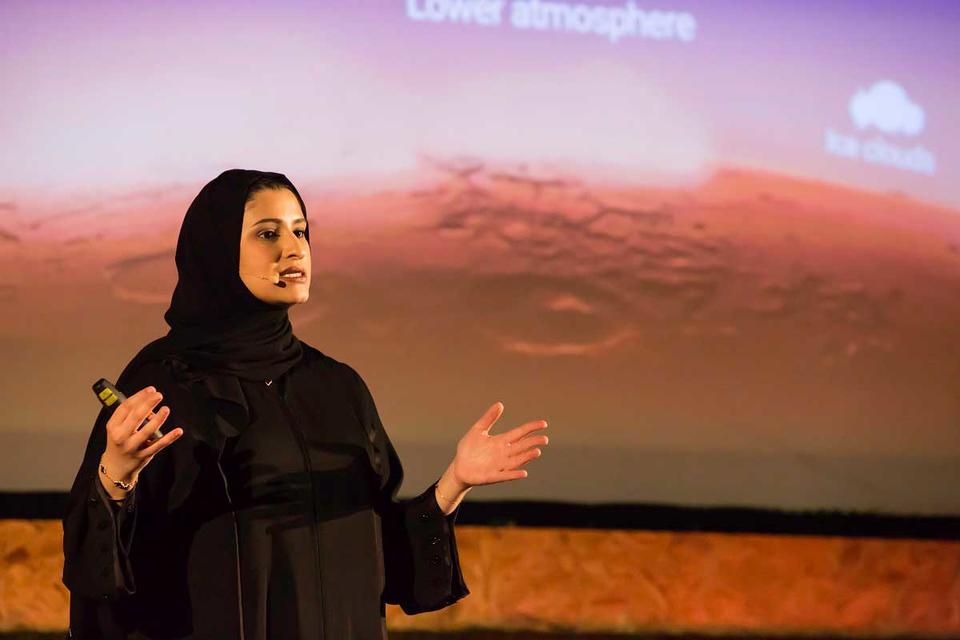 Final preparations for the launch of the $200 million Hope Probe to Mars on July 15 are going “according to the schedule and time without any delay”, according to Sarah bint Yousif Al Amiri, the UAE’s Minister of State for Advanced Sciences.

The launch is the first Arab space mission to Mars, and it aims to study the Red Planet’s atmosphere, as well as inspire the region’s youth and pave the way for scientific breakthroughs.

Next week’s launch comes after the UAE sent its first astronaut to space in September last year, and it’s hoped that the Hope Probe will generate similar interest from around the region.

The unmanned probe Al-Amal – Hope in Arabic – will blast off at 00:51:27 UAE time from the Tanegashima Space Centre, in Japan, and right now it’s a case of carrying out the final checks.

“Yesterday [July 8] we had our flight readiness review. In this review we checked that the spacecraft is ready for launch and also the systems are now at a level that is ready to be launched,” Al Amiri, who is also the Emirates Mars Mission’s deputy project manager at the Mohammed Bin Rashid Space Centre, told Arabian Business.

“We also checked the ground segment and the operations and mission controls. That they are also ready to accept the spacecraft after the launch. Now the final checks are currently on-going on the launch vehicle, spacecraft and the mission control and we are ready to launch as scheduled early in the morning on July 15,” she added.

Al Amiri explained that The Hope Probe “is truly a scientific mission with a scientific driver”, adding that there are three “primary scientific objectives” of the mission.

Space is the gateway to Science .. and Science is the driver to future Economy.. pic.twitter.com/Hj30qJQ1dL— HH Sheikh Mohammed (@HHShkMohd) July 7, 2020

The second is to explain how the weather changes the escape of Hydrogen and Oxygen through correlating the lower atmosphere conditions with the upper atmosphere.

“We also look at how far the hydrogen and oxygen extends into space, and this gives us a better understanding of loss of the Martian atmosphere,” said Al Amiri.

She continued: “Therefore, understanding the evolution and the climate change of the Martian atmosphere is very important to understand how planetary atmospheres as a whole transform and change.”

What happens after July 15?

Once the Hope Probe has been launched, there are several phases that will measure the success of the mission.

She said: “Each milestone has its own success criteria that allows us to transition to the next.”

The Hope Probe separates from the launch vehicle “almost an hour after the launch”. Following separation the Hope Probe is stabilised and solar panels are deployed as a source of energy.

“We then get communication and check the status and health and safety of the spacecraft and after that, the spacecraft starts its pre-programmed manoeuvres to turn on its propulsion system and start heading towards Mars.”

After the seven-month journey towards the Red Planet, the Hope Probe enters into the first orbit, called the Capture Orbit.

Al Amiri said: “To get in this orbit we need to turn on our propulsion for almost 30 minutes to slow down. So we use the propulsion system as a brake to slow down the spacecraft and to be able to capture the orbit around Mars.”

Once the Hope Probe gets into orbit, the functionality of the spacecraft and its instruments is being checked and the transition to science orbit begins.

She explained: “The final success of the overall mission is collecting all of the science data over an entire Martian year, that is two earth years; and announcing and coming up with interesting findings about the Martian atmosphere that furthers our knowledge there.”

Investment in the future

The cost of the Hope Mars Mission has been considered among the lowest in the world when compared with similar programmes.

“The UAE government was very adamant on finding a relatively lower cost mission than other missions and at the same time in a shorter amount of time,” Al Amiri explained.

“This is an investment in building capacity – i.e. it’s building areas of technology that the UAE did not have before as a whole… So it is not only talking about the space sector. We have designed and developed technology areas within this mission that we never had before,” Al Amiri added.

“The second capacity that was built was being able to build a scientific mission and utilising planetary science in conjunction with engineers and be able to build the comprehensive mission overall.”

According to the minister, the Hope Probe is “a much riskier mission”. “The spacecraft is more autonomous than others that we’ve built. So the engineers’ skill set had to increase quite rapidly to be able to design such a system.”

“Overall the impact of this mission is to further lay grounds on the foundation of science and technology for the UAE’s next 50 years.”

Disney World Is Ending One of Its Most Iconic Firework Shows

Before and after shows sad truth behind holiday hotspot