Government lawyers used airline executives’ own words in trying Tuesday to persuade a federal judge to kill a partnership between American Airlines and JetBlue Airways.

The government argued that the deal is, in effect, a merger that will cost consumers $700 million a year in higher fares. It said JetBlue’s pending purchase of Spirit Airlines will make matters even worse for travelers. 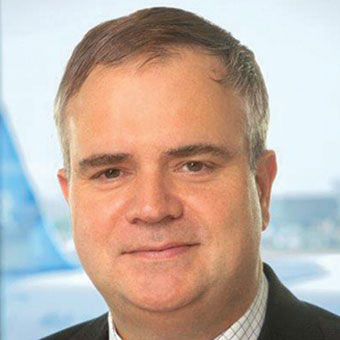 JetBlue CEO Robin Hayes was the first witness in the trial in federal district court in Boston over the federal government’s antitrust lawsuit against American and JetBlue. The airlines are coordinating schedules and sharing revenue from flights in the Northeast, including New York-area airports.

Hayes was quizzed about his own previous statements criticizing joint ventures involving other airlines and a 2019 comment that the airline industry “has never been more concentrated than it is today,” which he said led to higher fares and poor service.

Hayes testified that regulators had not imposed enough limits on those deals. He contrasted them with the pact between American and JetBlue, which he said involved no cooperation on setting prices.

In another 2019 memo, an American Airlines executive vowed that his company would fight JetBlue for supremacy in Boston — even using a metaphor of swinging baseball bats.

“We know how the story ends,” said William Jones, the lead attorney for the Justice Department. “Rather than continuing to slug it out, American and JetBlue decided to collaborate rather than to continue competing.”

Lawyers for American and JetBlue countered that the government has presented no evidence that their alliance — in place for 18 months now, since it was blessed by the outgoing Trump administration — has harmed consumers or resulted in higher fares. They said that it has allowed the airlines to add 50 new routes and create a stronger competitor to Delta and United.

The airlines’ lawyers said that the Justice Department sued prematurely instead of taking a wait-and-see approach.

“Most cases don’t get brought until there is some tangible evidence that the practices are doing harm,” said Daniel Wall, a San Francisco lawyer who is leading American’s defense.

Wall challenged the government’s claim that previous airline mergers — about a half dozen over the last two decades — have led to higher prices.

Transportation Department data from the first quarter shows that the national average fare declined 29% in the last 10 years and 36% in the last 20 years, after adjusting for inflation. While consolidation has eliminated famous aviation names such as TWA, Continental and Northwest, new low-fare airlines — including JetBlue — have pushed fares lower over that period.

The Justice Department and six states that have joined its lawsuit plan to call a Georgetown University economist who will testify that the American-JetBlue deal will reduce competition and cost consumers $700 million a year.

“And it stands potentially to get worse with JetBlue’s announced acquisition of Spirit Airlines,” Jones said.

The Justice Department is currently examining JetBlue’s proposed $3.8 billion purchase of Spirit. Jones’ comments indicate that regulators could take a dim view of the acquisition, which would mean the end of Spirit, the nation’s biggest discount airline.

The Biden administration has pushed to aggressively enforce antitrust laws, but it lost two major cases last week. The Justice Department failed in bids to block a merger of two big sugar refiners and an acquisition by health insurer UnitedHealth Group.