This is a wetland nature reserve on the site of a former salt works in the Tees valley, where the skyline is still dominated by heavy industry. Usually, 65,000 people visit the reserve each year, hoping to spot otters, harvest mice and water voles – all of which are relatively easy to see here, as they’re used to visitors. In summer, see the sand martins that nest in the banks of the creeks, and also the busy colony of common terns, which utter a constant chorus of harsh, unmusical cries all day long. Come winter, the pools are thronged with waders and ducks from Siberia, the evening starling roost is spectacular, and barn, long-eared and short-eared owls can be seen hunting at dusk.
• Currently open 8.30am-4pm, car park (limited capacity) and trails open; visitor centre, shop, cafe and toilets closed at time of publication; check website for updates, rspb.org.uk 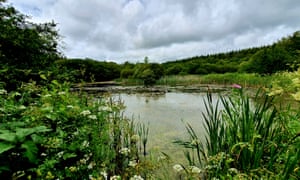 As a coal mine, this was the scene of one of Britain’s worst mining tragedies when, in 1892, more than a 100 men and boys died in an underground explosion. It was reopened as an open-cast mine, but when that closed in the 1980s it became a nature reserve run by the Wildlife Trust of South and West Wales. The acid soils and shallow, surface-water pools attract summer visitors, including great crested newts, more than two dozen species of dragonflies and damselflies, and the rare marsh fritillary butterfly – a miniature vision of orange and black. There are hides to watch from and lots of wildflowers, as well as grass snakes, adders and slow-worms, and a range of insects including, rather aptly, mining bees.
• Reserve open, but car park and visitor centre closed at time of publication, welshwildlife.org 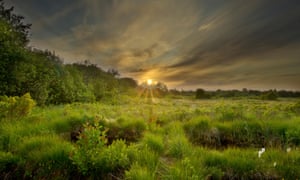 Montiaghs Moss was once the centre of Northern Ireland’s peat industry. As late as the 1990s, peat was dug here by hand, before being transported along the River Lagan to Belfast. Today, the area is a raised bog, one of the most threatened habitats in Europe. It is home to a colony of the nationally rare Irish damselfly, a species only discovered in Northern Ireland less than 50 years ago, and not present at all in Britain, though it’s common in northern Finland. This green, blue and black, matchstick-size insect can be hard to find, as it is only on the wing on sunny days from May to July. Other dragonflies on the wing at this time of year include the strikingly crimson-coloured ruddy darter, as well as plenty of commoner species. Nearby, Craigavon Lakes is home to another sought-after Irish insect, the delicately beautiful cryptic wood white butterfly.
• Open access, daera-ni.gov.uk

The remnants of this site’s 19th-century lime workings can still be seen today. The highly alkaline soils have created a grassland habitat covering 12 hectares, ideal for orchids, which thrive because more common and widespread wildflowers are unable to grow here. Visit in July to see the widest range of species, including the fragrant and greater butterfly orchids. Sunny days are excellent for butterflies, such as the small heath and Scotch argus, while breeding birds include the yellowhammer, which sings its distinctive song: “A-little-bit-of-bread-and-no-cheeese …”
• Open access, no facilities, limited parking, scottishwildlifetrust.org.uk 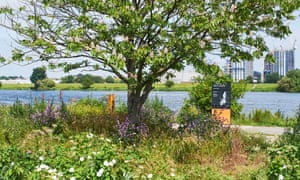 These working reservoirs, owned by Thames Water, have been transformed into one of the best urban nature reserves in the UK, managed by the London Wildlife Trust. In spring and summer a large colony of cormorants nest in the surrounding trees, and there is a heronry with up to 40 breeding pairs of these noisy birds. The peregrine falcon – the world’s fastest creature – visits regularly, as do almost half a million people a year. During the winter it attracts internationally important numbers of ducks, such as wigeon, pochard and shoveler. A couple of miles away across the A10 is its smaller sister reserve, Woodberry Wetlands (reopens 15 July), a similarly quiet haven for wetland birds.
• Currently open daily 10.30am-5pm, car park and visitor centre closed at time of publication, walthamstowwetlands.com 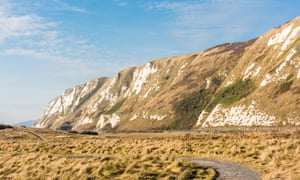 Beneath the White Cliffs of Dover, this extraordinary reserve has been reclaimed from the sea, using soil dug out when the Channel tunnel was built, and owned by Eurotunnel. It is home to more than 200 species of plants, with the star attraction being the early spider-orchid, one of the scarcest members of its family, which flowers here between late March and early June. On hot summer days, the chalky soils attract basking adders and common lizards, while breeding birds include the whitethroat and stonechat. Coastal plants include rock sea-lavender and sea asters, and sea buckthorn, whose berries are still visible in winter. Thirty species of butterfly – more than half the UK total – can also be seen here, with peak numbers in July.
• Currently open 7am until dusk, car park open, samphirehoe.com 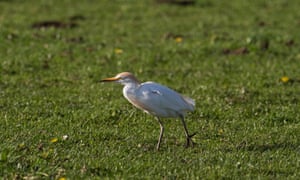 Now a Somerset Wildlife Trust nature reserve, this area was formerly peat diggings. It supports a wide variety of wetland birds, including several recent colonists to the UK. Three species of egret (little, cattle and great white) feed around the pools and in the surrounding fields, while in spring and summer the elusive bittern booms from deep inside the reedbeds, but rarely shows itself. Bearded tits and kingfishers are regularly seen, especially from the hides, and from April to August hobbies – one of our most acrobatic birds-of-prey – hunt dragonflies overhead. Otters are present but tricky to find: your best chance is to visit early or late in the day, when fewer people are about.
• Visitors must park in car park, not on road. No toilets or cafe, somersetwildlife.org 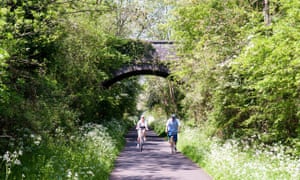 This disused railway line, running for 13 miles between these two West Country cities, was first opened as a walking and cycle route in the late 1980s by the Bristol-based charity Sustrans. It is now part of the 16,000-mile National Cycle Network. Wildlife-wise there is nothing particularly scarce here, but this green corridor provides an ideal route along which plants and animals, as well as people, can travel. In spring, the bushes alongside the path are alive with the songs of migrant warblers, such as the chiffchaff, blackcap and willow warbler. A range of butterflies includes the shade-loving speckled wood, while thenationally rare Bath asparagus can also be found along the trackside verges. On summer evenings, swifts and house martins hawk for insects overhead. In Bath itself, look out for the peregrines that nest in the city centre, and are feeding their young during the summer.
• sustrans.org.uk 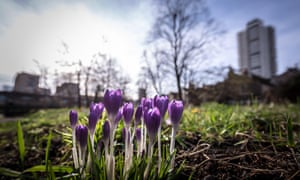 One of Victorian London’s “Magnificent Seven” urban cemeteries, Tower Hamlets closed to new burials in the 1960s. After years of neglect, it was almost lost to the developers in the 1990s, but was saved thanks to the efforts of local campaigners. It is now a haven of greenery in one of the capital’s most-deprived boroughs, and is the nearest fragment of ancient woodland to the centre of the city. In summer, the park is one of the best places in the capital for butterflies, including the silver-washed fritillary and day-flying moths such as the hummingbird hawkmoth. Dragonflies – including one of our largest insects, the emperor – hawk for smaller insects over the ponds on warm summer days. Urban foxes find a haven here, too, while the ponds are home to plenty of frogs, toads and newts – providing an ideal place for pond dipping for local schoolchildren.
• Open, events and talks currently suspended, fothcp.org 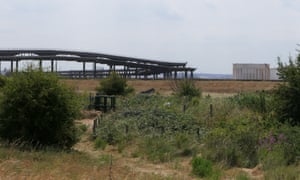 This former oil refinery has the honour of being the first brownfield site to be turned into a nature reserve protected specifically for its invertebrates. Now run by the RSPB and the conservation charity Buglife, it is home to almost 2,000 species of invertebrates, more than virtually any other site in the UK. These include the bee wolf – a wasp that preys on honeybees, which it drags down into its tunnel lair – brown-banded and shrill carder bees, bombardier beetles and several rare dragonflies and damselflies, including the southern migrant hawker and scarce emerald. In summer, butterflies include wall brown and marbled white, while common lizards and slow-worms can also be seen on warm, sunny days. Swallows, martins and swifts hawk for insects on warm summer evenings.
• Reserve open 24/7, car park open 9am-5pm, rspb.org.uk

Stephen Moss is author of The Accidental Countryside: Hidden Havens for Britain’s Wildlife (Guardian Faber, £16.99). To order a copy for £11.99 visit The Guardian Bookshop