The ferry from Termoli noses its way towards two petite islands, slipping into a serene Adriatic inlet. To the left, San Domino’s low limestone cliffs rise, crowned by Aleppo pines. To the right, the Abbazia di Santa Maria a Mare, an 11th-century abbey built by Benedictine monks, dominates the skyline of San Nicola. Fishing boats crowd the waters between. 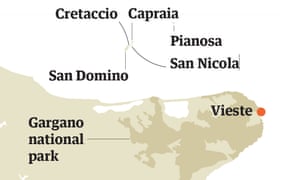 As I set foot on Italy’s most off-the-radar archipelago, it also feels like I’m stepping back in time. Lying 22km north of Puglia’s Gargano peninsula – the spur on Italy’s boot – the five Tremiti Islands (San Domino, San Nicola, Capraia, Cretaccio and Pianosa) are part of the Gargano national park, a pristine swathe of protected land and sea. They look more Croatian than Italian, with limestone bluffs, rocky beaches and translucent turquoise water. Capraia, Cretaccio and Pianosa are uninhabited and cars are banned on the other two, except for residents.

San Domino has the most to offer tourists, and courtesy minibuses wait at the dock to take guests up to the main village, but I set off towards my hotel on foot, passing an incongruous helipad and a contemporary wooden church that wouldn’t look out of place in Scandinavia.

Thelaid-back atmosphere belies the islands’ stormy past. Over millennia, Roman and Italian leaders used this archipelago as a penal colony. In the first century AD, Emperor Augustus exiled his granddaughter, Julia the Younger, to the Tremiti on charges of adultery. Nearly two millennia later under Mussolini, gay men were interned on San Domino under harsh conditions.

Today, such harrowing circumstances may have been left in the past. But for much of the year,For much of the year The island retains its feeling of isolation. It gets busy with holidaymakers in July and August – but it’s shoulder season as I walk a 5km hiking trail around the coast, and I’m alone as I picnic under pines and prickly pear cacti, dipping in and out of sun-splashed coves, breathing in the rosemary-scented breeze. The route passes a stretch of coast riddled with caves and one, Grotta delle Viole, shimmers violet in the sunshine thanks to the purple sea sponges below. There’s not a soul in sight so I strip to underwear for a swim. Endless, nameless caves here are the stuff of pirate legend, each lapped by limpid seas of Caribbean allure. 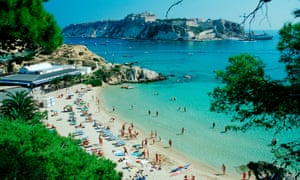 I’m staying at the Hotel Eden, in the island’s one village. Its bedrooms are a 1980s vision of pelmets and big-box TVs, but its private beach, Cala Matana, reached by steps that snake down the hillside, is a treat: rocks, golden sand, sunbeds, limpid water. You wouldn’t find this on Capri.

Come nightfall, I join the tourists streaming to the main square. There’s a particularly vibrant ambiance at Ristorante La Fenice. Aperitivi are served by the pool, and top-notch pizza (plus more elaborate meals such as grilled octopus with pureed potatoes and rosemary), are dished up at oversized wooden tables.

The following day, I head back to the port, ready to check out the islands from the sea. There are lots of boat trips to secret bays for picnics and sunbathing – with great snorkelling en route – and to the Tremiti’s historic capital, smaller San Nicola island (although the brave could feasibly swim across). 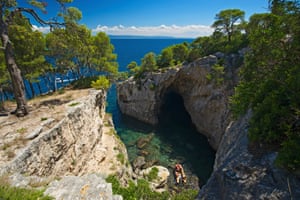 Diving enthusiasts flock to the Tremiti for underwater caves, rock archways and wreckage of second world war planes, as well as black coral, barracuda and lobster. They can also take a peek at a four-metre-high statue of Padre Pio (southern Italy’s popular local saint) beneath the water between Capraia and San Nicola.

But there’s plenty to see with a snorkel too. In fact, the archipelago boasts 23 underwater trails, marked for taking in the marine flora and fauna. I glimpse a 16th-century Ottoman shipwreck, plus a scattering of starfish and an octopus.

That evening it’s time to return to the mainland and instead of the ferry I take a 20-minute flight on the islands’ 15-seat Westland helicopter – perhaps the chicest public transport option in Italy. Before I go, I sneak in a final dip at Cala delle Arene, a crescent of golden sand just south of the port, dotted with blue striped parasols. I drag myself to the helipad: 21st century here I come.

How to get there
Fly to Bari or Pescara. Tirrenia runs regular ferries between Termoli and the Tremiti Islands (1hr 15min, €16.50 one-way). The Tremiti-Vieste-Foggia helicopter link is operated by Alidaunia (20 mins,€28.50 one-way in shoulder season).

Where to stay
Doubles at Hotel Eden from €76 B&B (open mid-May to late September).