“Nobody likes to hang around airports” ran TWA’s 1960s slogan – but the new TWA Hotel at New York’s JFK airport aims to encourage travellers to do just that. The former airline’s stylish terminal building, designed by Eero Saarinen and opened in 1962, is being redeveloped into a 512-bedroom property. The midcentury modern-inspired hotel will open on 15 May, with bookings starting on 14 February (at noon EST, 5pm GMT).

The original 1962 building, known as the TWA Flight Center, will be the hotel’s main hub, featuring six restaurants, eight bars, shops and a rooftop pool, while two new “wings” will house the guestrooms. The 1960s-style interiors will include midcentury modern Saarinen furniture, retro TWA posters, rewired vintage rotary phones and views of the runways through noise-cancelling floor-to-ceiling windows. 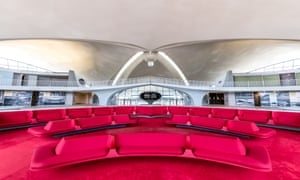 The original neofuturist structure includes a winged, thin shell roof and fluid, open design, which the architect hoped would evoke the sensation of flight. It became a designated New York City Landmark in 1994 and was listed on the National Register of Historic Places in 2005. The redevelopment includes renovation of the arched, red-carpeted flight tubes – as seen in Steven Spielberg’s 2002 film Catch Me If You Can – which connect it to terminal five. The hotel will also feature a classic Italian Solari split-flap mechanical message board, a large observation deck and a museum dedicated to the Jet Age, with vintage uniforms, original in-flight amenities and other memorabilia. 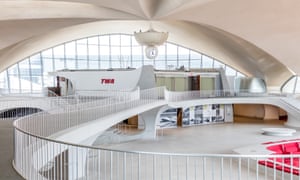 A 1958 Lockheed Constellation airplane has also been transformed into a cocktail lounge just outside the hotel. Originally commissioned in 1939 by TWA owner Howard Hughes, the “Connie” model broke the transcontinental speed record in 1946. This particular plane, Connie N8083H, is one of only four remaining of its kind, and has been restored with original parts, including cockpit controls. It had a colourful former life, shuttling supplies to Prudhoe Bay in Alaska in the 60s before being modified to airdrop marijuana from in South America, and abandoned in Honduras in the 80s. 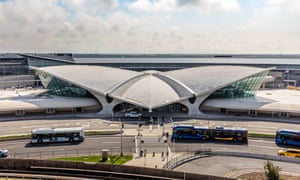 Managed by MCR and Morse Development, the hotel has been under construction since late 2016 and is expected to be popular with “avgeeks”, preservationists and Mad Men fans as well as JFK stopover travellers. Rooms will cost from $249 a night

TWA was a major player in the aviation world from the 1930s, through Hughes’ days of glamour and celebrity in the 40s and 50s. The eccentric tycoon owner relinquished control in 1960, and subsequent decades were a mix of highs (such as carrying more than 50% of all transatlantic passengers in 1988), and lows, culminating in TWA’s closure in 2001.

“[The TWA hotel project] is a labor of love for our entire team,” says Tyler Morse, CEO of MCR and Morse Development. “We are counting down the days until the landmark building, dark since 2001, is filled with life again.”

Explore Kangaroo Island with your caravan or camper trailer ·

This is what makes the Notre Dame cathedral so iconic

It’s time to book holiday trips. Is it safe to travel, or is this the year to skip a family get-together?