‘No kebabs, no sandwiches – that’s our rule. Apart from that, if it’s good we’ll consider it.” Romain Passelande and Thomas Le Gourrierec are talking about their website, Les Petites Tables, a guide to finding a good lunch (and sometimes dinner) in Paris for under €10. At one time, says Romain, you’d look to a brasserie for good basic food; now, brasseries just do rubbishy croque-monsieurs and frozen stuff. But as their quality declined, other places, from bistronomie joints to veggie cafes and ethnic restaurants, filled the gap. 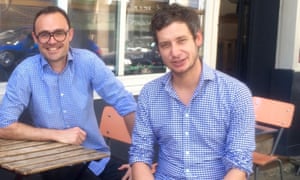 Tracking them down requires inside knowledge, though, which is why in early 2015 Romain left his ad agency job and set up the site with food critic Thomas. It has proved massively popular, attracting over 700,000 unique users – and not just among their target 25-35 age group. Groups of pensioners now do the rounds of Les Petites Tables restaurants, and the pair had a heartwarming letter from a train driver on the Métro who said he and his wife had stopped eating out – couldn’t afford it – but subscribed to their weekly newsletter and are going out again. Food bloggers as marriage savers – whatever next?

Thomas and Romain are experimenting with a few higher-end meals – always with the emphasis on value, such as four courses of fancier food for €23 – and events with DJs and cheffy finger food, but are wary of moving too far from their original premise.

It’s August when I meet Romain and Thomas at Le Bichat (see below), a family-run organic cantine near Canal Saint Martin, and Paris is quiet, with most of its inhabitants decamped to the Med or Brittany. Picking 10 from their database of 70-plus restaurants is probably as hard for these two as choosing a favourite child, but here is their selection of “little tables”. 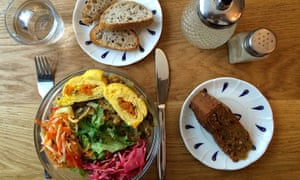 Smelling of spices and stock, Le Bichat is a low-key cafe opened last year by actor and activist Augustin Legrand and run by his family. There are tempting salads and soups, but the big idea here is the bol (from €8), a bowl of seasoned rice served with generous helpings of organic veg sourced from small farms within 100km, plus a choice of topping – vegan, egg, fish, pork or chicken. Bottles of house tamarind or ginger dressing are passed between the tables. Wash it all down with unsweetened homemade ginger lemonade (€2), or drink water and save the euros for homemade cake or chocolate pudding. There’s also organic wine (from €3 a glass).
• 11 rue Bichat, lebichat.fr, open daily 9am-11pm 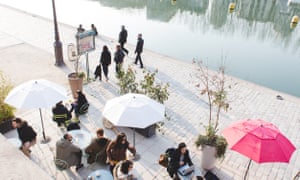 Bassin de la Villette is home in summer to the urban beach Paris-Plage, and to Le Pavillon des Canaux all year round. Order a big salad with chicken, chickpeas and avocado, or quinoa, asparagus, peas and pesto (both €9) at the counter downstairs and eat it on the canalside terrace, or in various retro-themed rooms upstairs in this former lock-keeper’s cottage. A programme of yoga, debates and workshops, plus the obligatory mashed avocado, speak of hipster ambition, but the quality of food (including homemade cake) is high.
• 39 quai de la Loire, pavillondescanaux.com, open Mon-Weds 10am-midnight, Thurs-Sat 10am-1am, Sunday 10am-10pm

Anyone for bibimbap?, 11th arr 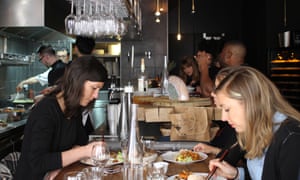 Celebrity chef and author Pierre Sang, known for Asian-accented haute cuisine (menus from €35), makes a meal to compete with McDonald’s on price. Each lunchtime, Monday-Thursday, he offers 40 portions of bibimbap, the national dish of his native South Korea, for €7 a pop. A raw egg tops a spicy bowl of (depending on the day) three kinds of rice, tender beef or salmon, baby carrots, mushrooms, kimchi, artichokes and tiny meat or fish dumplings, plus fiery chilli sauce. Get there early (between noon and 12.30pm, otherwise it’s all gone) and enjoy a cheap lunch with the sleek surroundings and charming service you’d get at, well, five times the cost.
• 6 Rue Gambey, pierresangboyer.com

A bargain in Saint-Germain, 6th arr 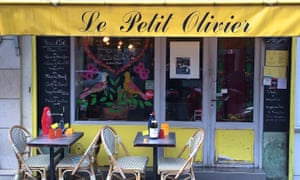 The chi-chi Saint-Germain district is good for celeb spotting but bad for bagging a cheap meal, except at Le Petit Olivier, where owner Laurent presides in shorts and T-shirt. There’s tap water in old whisky bottles, offbeat art on distressed walls and a €10 menu (lunch and dinner) comprising a plat du jour (choice of three) and dessert. The plat might be cod with rouille, rice and bouillabaisse sauce, or roast pork on herby pasta. Afterwards, help yourself from five shelves of homemade desserts: oeufs à la neige (meringue on creme anglaise) with fruit, tiramisu, crumble or chocolate mousse.
• 82 rue du Cherche-Midi, no website, +33 6 17 18 02 83 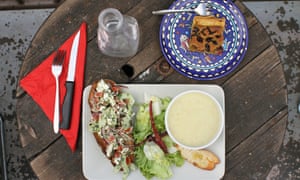 La Péniche Antipode is a big barge, berthed in the Bassin. Owned by the Abricadabra theatre company, it is a venue for plays, comedy and live music, but there’s cooking talent on display, too, made with artisanal and fairly traded ingredients. A satisfying meal of homemade soup, then something delicious on toast (spinach with chickpeas, garlic and paprika, say, or goat’s cheese with artichokes, pine nuts, honey and coriander) costs just €7. Add a salad for €2 or, still within the €10 limit, dessert for €3. The tables are on deck, with separate smoking area; covers and heaters keep it toasty.
• 55 Quai de la Seine, penicheantipode.fr, open noon-2.30pm (4pm weekends) and 7pm-11pm 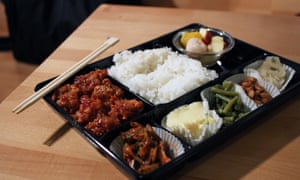 Rue Sainte-Anne, near the Palais Royal, is Paris’s Little Tokyo, but just off it is Ace Bento, a Korean interloper. Lining up at the counter, diners choose five tempting side/appetiser dishes from an array that includes sautéed garlic stalks, marinated papaya, seaweed, potato salad, lotus root or peanuts in soy sauce – and add a main such as crispy chicken, breaded fish or prawn fritters. The staff dollop on a generous portion of steamed rice, add a cup of miso soup and a fruit salad for dessert, and send you on your way – to a bench at a plain blond-wood table – happy and, at lunchtime at least, just €10 poorer.
• 18 rue Thérèse, on Facebook, open Mon-Sat 10am-10pm 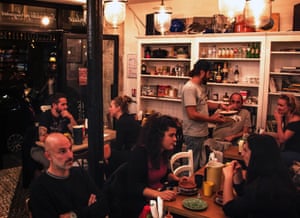 At Nossa, a Portuguese chicken roastery near the Sorbonne, the skin of grilled spatchcocked birds is as crisp as, well, a crisp, the flesh tasty and yielding, and sauces come in whisky, curry or “secret recipe” varieties. There are chips if you must, but garlicky baby potatoes, rice, green beans or salad make better companions. At weekday lunchtimes, €10 buys a quarter of a chicken and a side dish, all served in a little wooden crate, plus either a starter, drink (wine or beer) or a pastel de nata (custard tart) for dessert. There are little green tables with folding chairs on the pavement outside, for sunny days.
• 1 rue de l’École Polytechnique, nossa-paris.com, open noon-3pm, 7pm-10pm (9.30pm Sundays), closed Monday 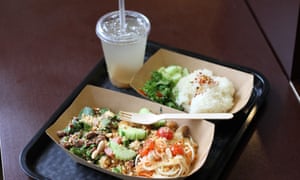 Shiny metal tables at Street Bangkok, crammed together beneath walls decorated with Thai street art, already evoke steamy nights on Bangkok’s Yaowarat Road… and then you taste the food. Chef Ja, formerly of the Mandarin Oriental in the Thai capital, opened this place barely a year ago and is particularly hot (in more than one sense) on spankingly fresh salads. Green papaya, beef, pork sausage and crispy rice versions, served in cardboard trays, are liberally strewn with equally perky mint, Thai basil and coriander. Three salads with rice and a soft drink cost €10 at lunchtime (drink costs extra at night). Even the muzak is specially mixed by Thai DJs.
• 3 rue Eugène Varlin, on Facebook. Open Tue-Sat noon-3pm, 7pm-11pm, Sunday noon-7pm 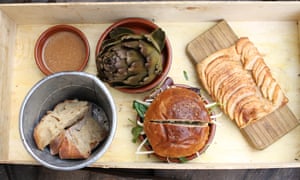 A million miles from the average creperie, La Pointe du Grouin is an industrial-chic Breton bistro near Gare du Nord. It requires diners to pay in its own currency, the “grouin” – changing euros (one for one) at a machine on the wall – which is a bit of a faff, but the friendly staff and loud, crazy atmosphere compensate. Specialities include breaded pig snout and sausage galette, but 10 grouins are well spent on a starter of whole artichoke with vinaigrette, then a bara bihan: this slightly breaks the no-sandwich rule, being a home-baked roll, but it’s filled with tasty cured herring, creme fraiche, tapenade and salad. That leaves four grouins for a slice of cinnamon-scented apple tart. Ouf!
• 8 rue de Belzunce, lapointedugrouin.com, open Mon-Fri 11am-3pm and 6pm-midnight, Sat 6pm-midnight 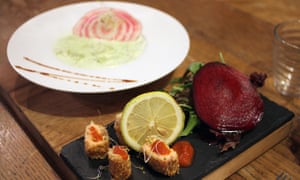 Paris’s Asian arrondissement is home to Le Vin qui Danse, a very French-feeling bar/restaurant, with carefully chosen wines and a great-value €10 starter-and-main-course offer lunchtime and evening. The building is an old convent, with beams and exposed stone, and young owners Tony and Lucie source ingredients daily from the huge Rungis market a few kilometres away. A recent starter of lightly cooked salmon with sesame and tomato coulis came on a rather cliched slate, but was followed by gorgeous ravioli in creamy rocket pesto. Big eaters may find portions on the light side, except on Wednesdays, when they do their special burger, with the bun replaced by a pair of potato galettes.
• 69 rue Broca, vqd.fr, open Mon-Fri lunch and dinner, Saturday dinner only

Ovolo Hotels' Dave Baswal on growth plans in Asia-Pacific and beyond: Travel Weekly