I had my Boris Johnson moment a few hundred feet up Jebel Jais. The UAE’s highest peak is a rugged hunk of a mountain. It’s carved up by a smooth tarmac road that winds its way to the top, over 1,900m above sea level. The route takes the daytrippers and car nuts on what is effectively a road to nowhere – albeit a very picturesque road.

The peak is part of the Hajar range, with its stark, rocky ridges that appear anything from golden blonde to cantaloupe-hued, depending on the time of day and Instagram filter. I was in the northernmost emirate, Ras al-Khaimah, known as RAK, not to try and up my social media game, but to have a go at Jebel Jais’ via ferrata climbing route. I’d been planning to try the much-touted “world’s longest zipline”, which had been due to open in December. Bad weather has delayed the build, and the date is now set for early February. 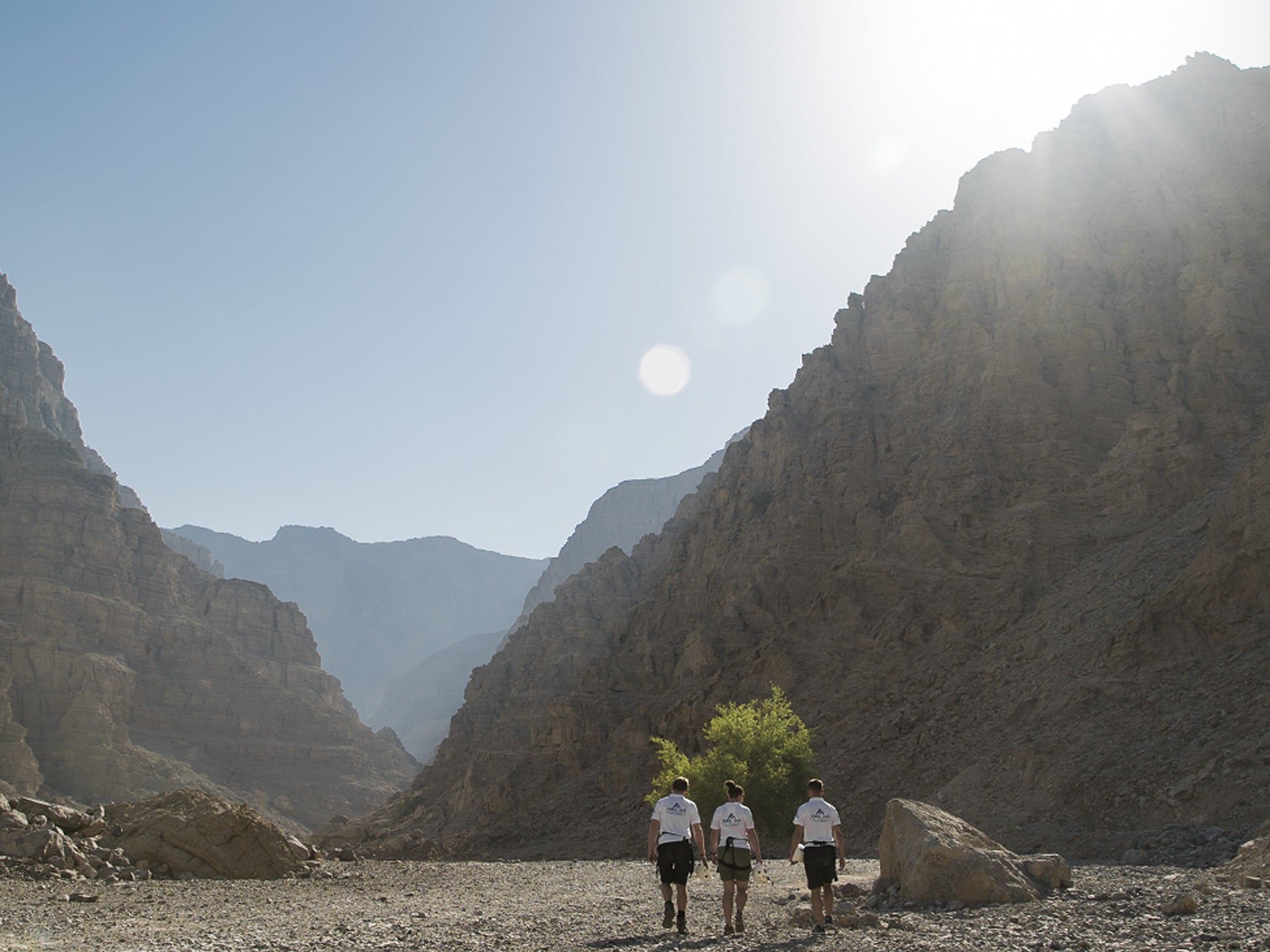 The new zipline will trump “The Monster”, a 2,200-metre line in Puerto Rico. Its presence will cement Ras al-Khaimah’s status as the adventure capital of the UAE, where visitors can escape the bustle and bling of Dubai, a 90-minute drive away, or the urban sprawl of nearby RAK City, and get closer to nature – whether that’s on foot, bike, supercar or hanging precariously from a steel cable.

On my trip, people kept pointing to the top of the mountain from where the zipline will eventually run. Punters will be able to zip side by side, reaching speeds of 80mph. For non-participants, there will be a mountain viewing deck at 1,300m, a space that will have areas for picnickers and food trucks to cater for the visitors and the growing number of hikers, campers and hardcore road bikers and runners who frequent the mountain (the area plays host to endurance races). 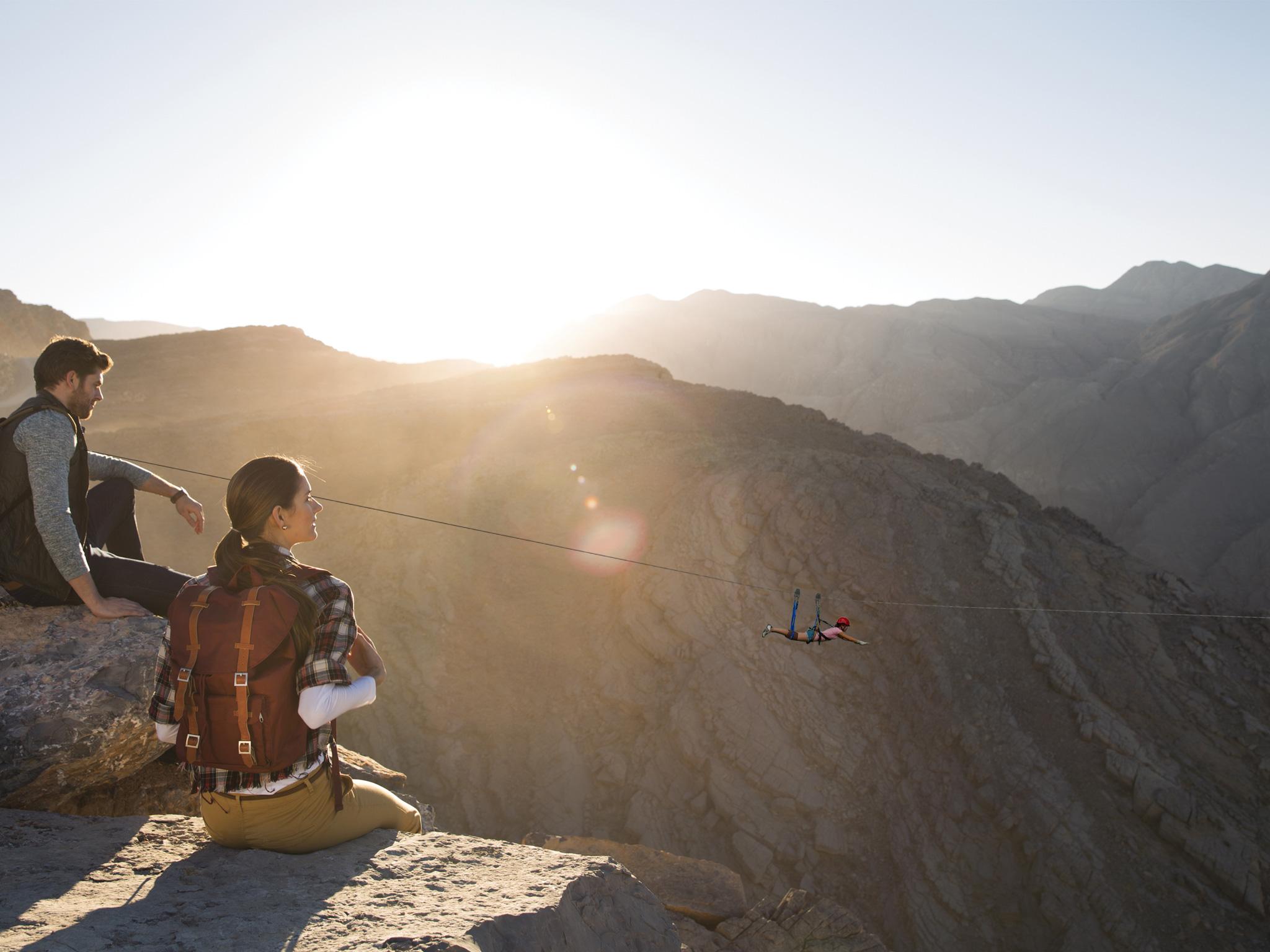 That’s not to say there’s nothing to do yet – there are currently 50m, 60m and 300m ziplines as part of the strenuous via ferrata. Meaning ”iron road” in Italian, these climbing paths were first used in the Alps as a way of accessing steep terrain to get between villages and cattle-grazing spots. Today’s are often geared towards visitors looking for an adrenalin rush, with a steel cable bolted to the rock, to which you attach yourself with a via ferrata kit – helmet, harness, and carabiner hooks. In a cleverly angled photo, it can make anyone look like a skilled mountaineer but really it’s a relatively safe way to have a mountain adventure.

Of course, it’s not risk-free. Each person is responsible for clipping themselves to the cable along the kilometre-long track and the three ziplines. Our guides (three for a group of eight – interestingly, more women than men do the via ferrata) were reassuringly strict on safety and wellbeing, reminding us to stay hydrated during our four hours on the course. It may have been winter, but the afternoon sun still sapped energy. Savvy visitors opt for the cooler morning session where you’re mostly in the shade. 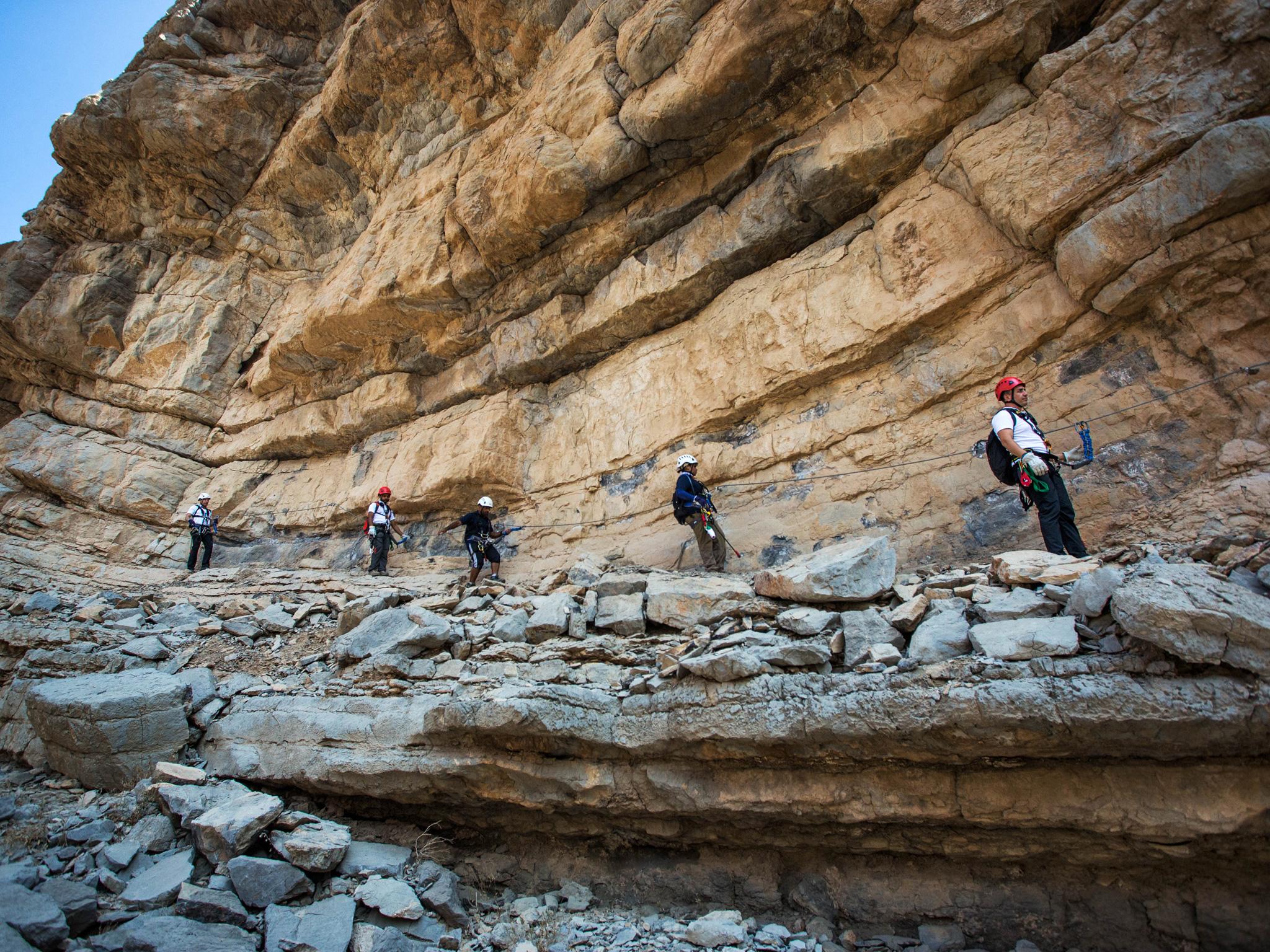 After signing a three-page disclaimer agreeing it would be our own fault if we died, we were ushered to the training area for a briefing. There are two carabiners to secure you to the cable; we should be clipped into at least one at all times. If a rock came loose, we were to shout to the person below, who should not look up “under any circumstances”. And while on the two shorter ziplines we would sail to the other side under our own steam, the 300m one would require grabbing a green loop towards the end to make sure we didn’t slide back into the middle. 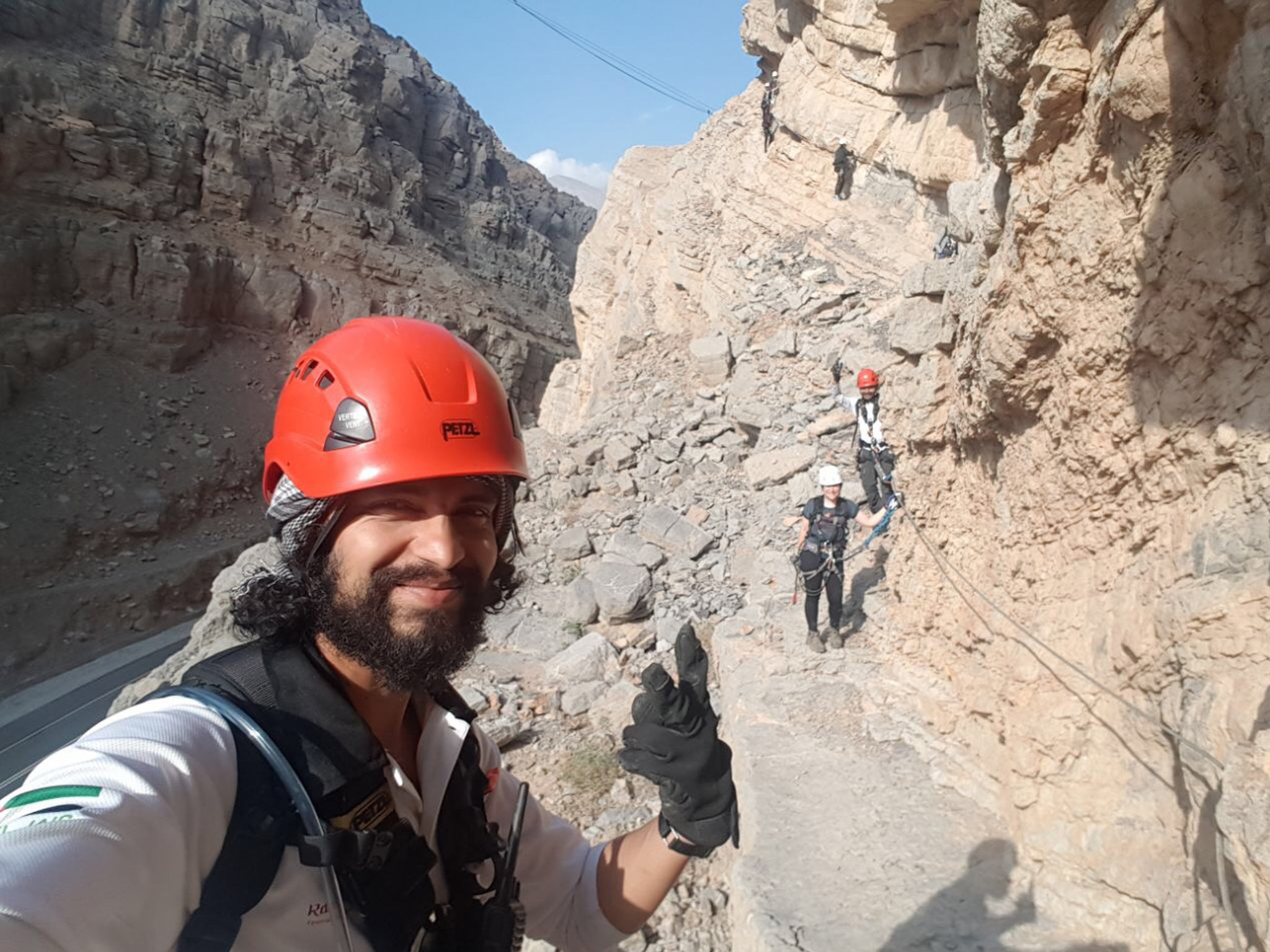 The first ascent got quite high very quickly, but with the guides positioned at the front, middle and back, anyone in need got a helping hand. Led by Mohammed “Amdy” Yunus, who’d trained with the British Mountaineering Council, they were world-class: chatting and joking to help us feel at ease, but with an innate sense of when it was time to get serious or assist anyone having a wobble.

As the path got steeper, with only a cable between us and the rock, it felt very close to nature. On the mountain, goats are the most likely spot, but elsewhere in the desert there are camels, donkeys, gazelles, wild cats and foxes, as well as an abundance of birds, from falcons to larks. It’s the quality of the attraction coupled with the accessibility of the new Jebel Jais set up, as well as the region’s sandy beaches and serene desert, that the low-key emirate hopes will attract more visitors. With Dubai and Abu Dhabi dominating the headlines, I felt like I was in on a soon-to-be-outed secret.

We walked for nearly two hours before we get to the first zipline. I’ve always preferred an adrenaline rush that I’m relatively in control of, so launching myself away from the rock and the steadying hands of an instructor felt much scarier for me than the climb we’d done so far. That said, the breeze was a relief from the sun and I did get a rush from flying through the air, safe in the knowledge that there was a guide to scoop me up at the other end. I never managed to forget that I was pretty high up, though. We were 120m at the highest point and looking down at the fast-moving road below turned my stomach every time. 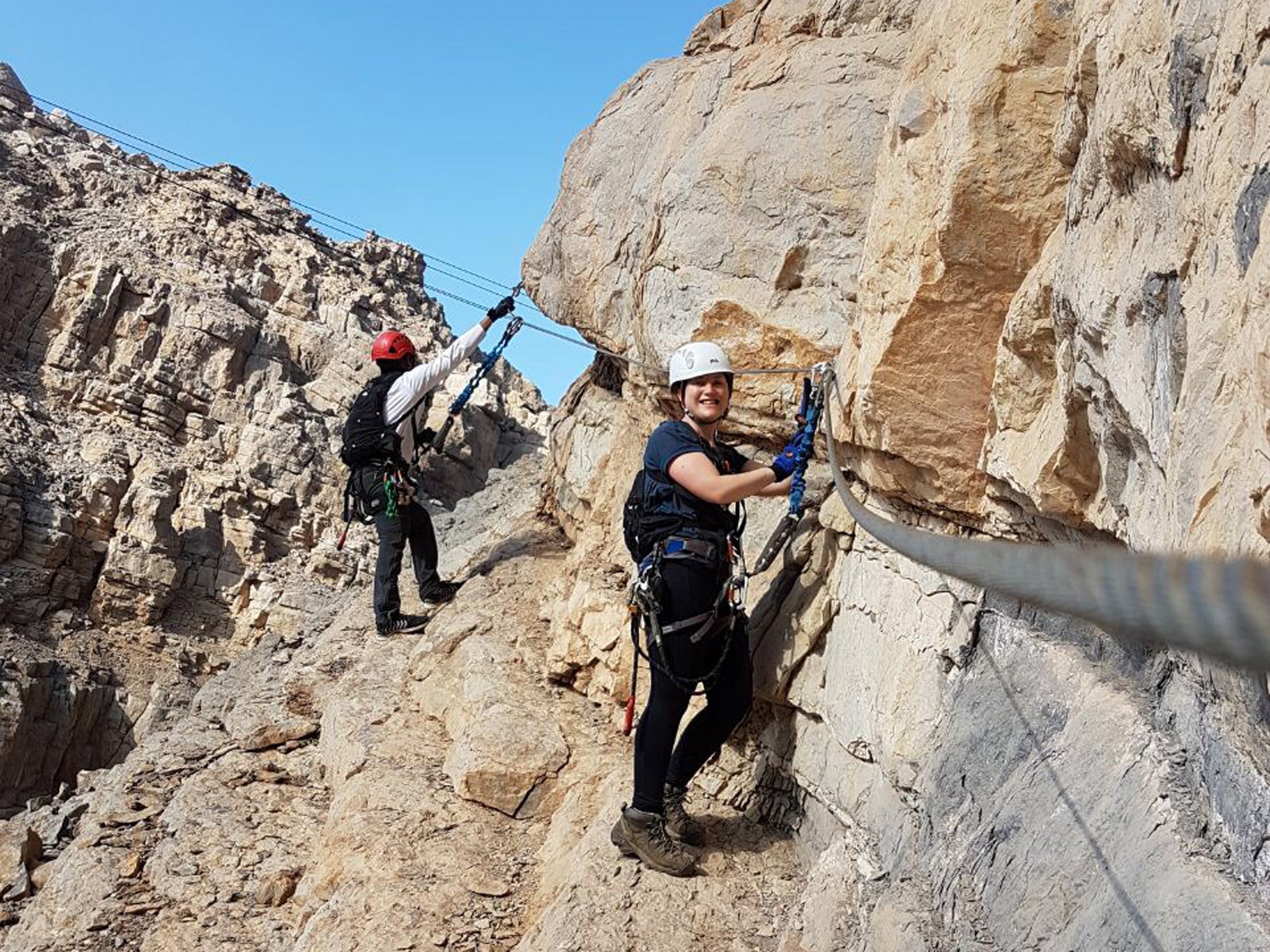 The 300m zipline felt like a different proposition to the other two: not just five times the length, but cantilevered 100m over the road. Amdy prepped me for the off, reminding me to grab the green loop at the end to allow the instructor on the other side to pull me back onto the rock.

I’d expected a speedy run but this was relatively slow – something I was grateful for, though it might disappoint those looking for more of a rush. It meant that I had time to take in the surroundings and appreciate the fresh mountain air and epic scenery. I even tried putting my arms out, like a kid playing aeroplanes. Unfortunately, in doing so, I forgot about the warning in the briefing. I saw the flash of green too late, reached for it and missed.

Before I’d had time to think, I was moving in the opposite direction of the waiting instructor and the rock that had been looming larger was getting smaller. As they had warned us, I didn’t stop until I was halfway back across the zipline where I jolted to a halt, the cable trembling, me dangling mid-air like Boris Johnson during the 2012 Olympics. Instead of limply waving two Union Jacks, I was grimly gripping the lanyards attaching me to the pulley. When Boris had his zipline malfunction in London’s Victoria Park, he was only a few metres off the ground and his joke about a ladder was a legitimate request. But no ladder would reach me here and onlookers quickly gathered to get a snap of the via ferrata dunce. The cars below tooted their horns. 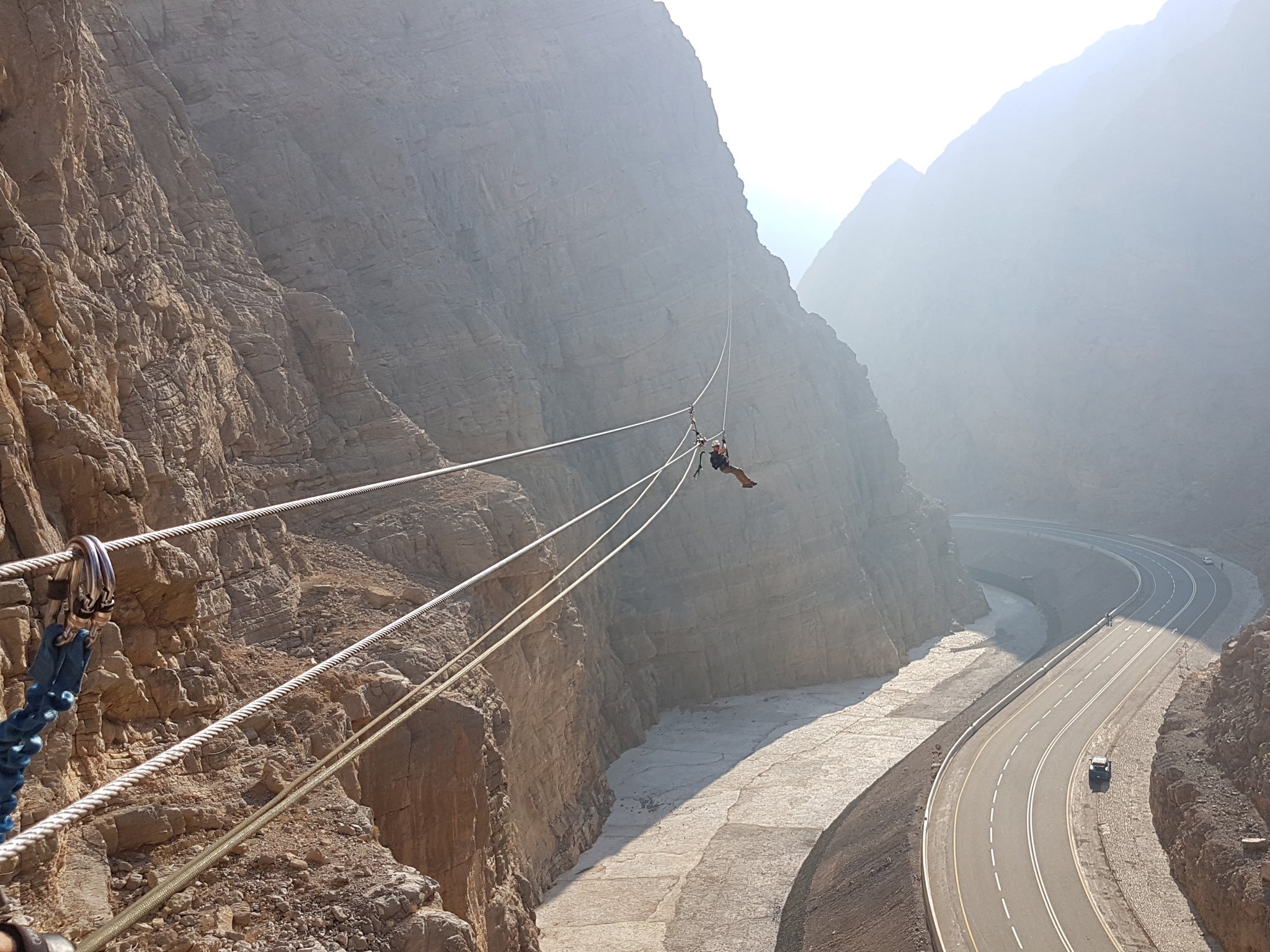 I assumed that I’d be swiftly winched to safety. No such luck; my rescue would involve one of the guys attaching himself to the cable, going hand over hand to get me, then clipping himself to me to bring me back. The logical part of my brain told me that it was unlikely a metal cable, pulley and numerous carabiners would fail. The other was telling me that the quivering cable signalled that I was about to plummet to the ground under the wheels of a Ferrari. As my knight in shining climbing kit made his way towards me painfully slowly, I realised I was whimpering. When he eventually hauled me to the ledge, I’d never been so glad to be back on firm ground. “Sally, you’re so lucky, you got to do it twice,” said Amdy. As I walked, wobbly-legged, back to the starting point, I wondered whether I was going to become a meme in Ras al-Khaimah.

“You’ll have to come back to do the world’s longest zipline soon,” said Amdy, back at the base. He pointed vaguely at the road to nowhere, now bathed in the pink-hued early evening light, ready for its Instagram moment.

Emirates flies direct to Dubai from Heathrow, Gatwick, Manchester and Birmingham from £293. From there, RAK is a 45-minute drive or a short flight (Emirates has connecting flights).

The Ritz Carlton Al Wadi Desert has doubles from £355, full board.

The Via Ferrata Ledge Walk costs AED400 (£70) per person, including all equipment. There are two daily trips from November to May, and pick-up from RAK City is possible. A bus from downtown Dubai runs to the city, with a change at Sharjah.

10 of the best campsites in England

Sri Lanka is safe from Getaboutasia ·

If You Recognize This Man in the Airport, He’ll Upgrade Your Flight to First Class or Give You a Free Hotel Suite

What Not to Buy for Your Vacation

Family Fun in the Caribbean