Regent Seven Seas Cruises’ next ship will have 15 suite categories and spend its inaugural 2023 season sailing the Caribbean.

The sixth ship in Regent’s fleet, the Grandeur will launch in November 2023 offerings 17 sailings and two transatlantic crossings, ranging from seven to 16 days. Reservations for the Grandeur’s inaugural Caribbean and Mediterranean seasons go on sale Sept. 22.

The 750-passenger ship will debut new looks for the Prime 7 and Chartreuse restaurants as well as the Observation Lounge.

Chartreuse’s design inspiration will be from 1925 Paris and the art deco movement, while Prime 7’s will be New York at the turn of the 20th century. The Observation Lounge will offer quiet alcove seating and have an art nouveau-inspired mesh crystal chandelier.

The 4,443-square-foot Regent Suite will boast a new space, a sky-lit and glass-enclosed parlor with two chaise lounges. The suite, which overlooks the bow of the ship, will have two bedrooms, two and a half marble-and-stone bathrooms, a living room and dining room, and a private in-suite spa with unlimited complimentary treatments, sauna, steam room and jetted bathtub. 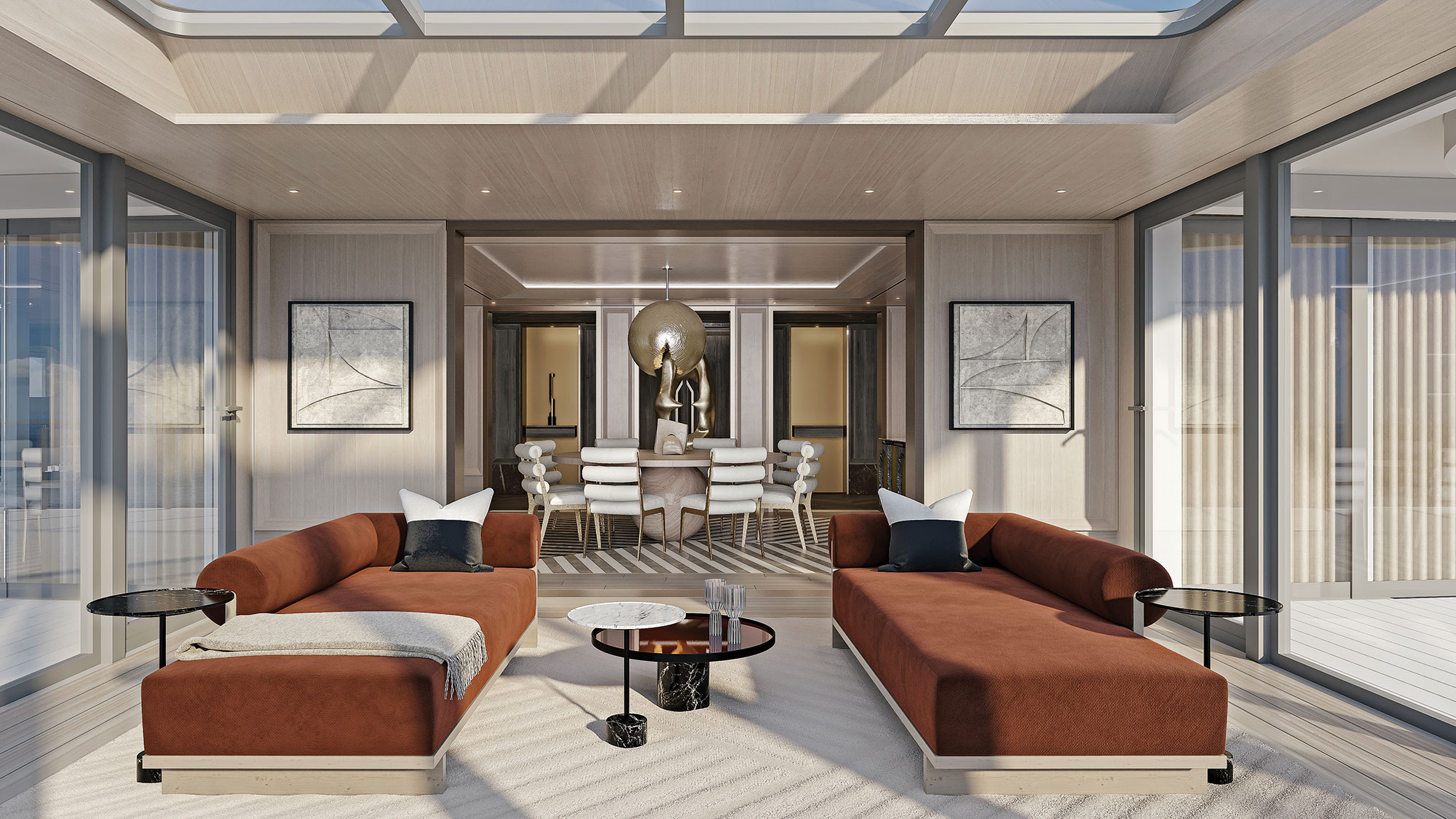 Regent in June revealed the ship’s name and the design of its Compass Rose restaurant. The Grandeur will be a sister ship to the Seven Seas Explorer and the Seven Seas Splendor.

The Grandeur’s first sailing will be Nov. 25, 2023, a 14-night crossing from Barcelona to Miami visiting, Seville, Spain; Funchal, Portugal; and Bermuda.

From Miami, the ship will do a seven-day sailing that includes a stop at Harvest Caye, the cruise line’s private island in Belize. Then comes a 16-night Central America cruise with a transit of the Panama Canal and port stops in Costa Rica, Nicaragua, Guatemala and Mexico. The cruise ends in Los Angeles.

The ship’s Jan. 8 cruise from L.A. to Miami will also transit the Panama Canal. The ship will then sail a mix of western and eastern Caribbean sailings before crossing back to Europe in April.

From Barcelona, the Grandeur’s Mediterranean season will include seven-day sailings to and from Civitavecchia (Rome), visiting the French Riviera and islands of Sicily and Malta; France and Italy’s west coast; Montenegro and Croatia. The ship will then offer Eastern Mediterranean cruises from May 20 from Venice, Athens and Istanbul.

Of the four Eastern Med cruises, three feature an overnight in Istanbul and one has a two-night stay in Israel.

European Waterways Announce the Return of the Italian Opera Cruise ·

A Stay at the DoubleTree by Hilton Hotel Orlando at SeaWorld