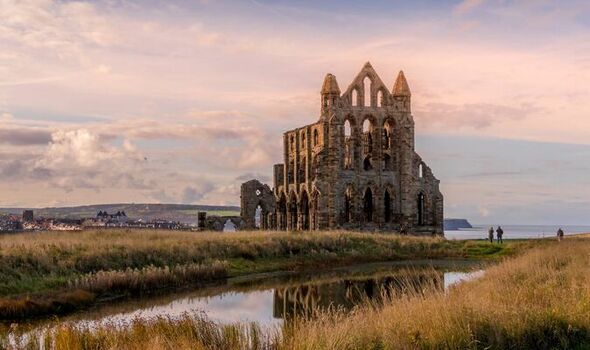 The brooding, gaunt ruins of Whitby Abbey dominate the town from the headland east of the narrows of the River Esk. You can see why Bram Stoker chose this place as an appropriate hideout for his antihero, who flitted ashore under cover of darkness from an anchored boat.

Climb the 199 steps up from the ancient nest of streets below and you’ll first come across St Mary’s Church, itself a squat, haunting place encircled by gravestones commemorating those who died at sea. Stay right next to the abbey’s Gothic skeleton in one of the best-sited Youth Hostels in Christendom.

This Whitby YHA has doubles with en suite facilities from £49.

Dartmoor and the Baskervilles, Devon

This barren moor, whose 170 tors – rocky outcrops – look like ancient Inca citadels, has long been a place of legend. On a dark, wet night it is easy to imagine encountering one of Arthur Conan Doyle’s ghostly hounds of the Baskervilles, roaming free.

Conan Doyle used the bog of Foxtor Mire, south of Princetown, as the model for the treacherous Grimpen Mire in the book, and you certainly shouldn’t be wandering across it unprepared.

Childe’s Tomb stands by Foxtor, marking where a horseman, lost in a blizzard, slit his horse’s belly and climbed inside to keep warm. He didn’t survive.

Find your own sanctuary at the Moorland Hotel by Haytor, where doubles with breakfast cost from £136.

Eyam and the plague, Peak District

The year is 1665, and the Black Death is marching inexorably around the UK.

Initially it seemed to be a city problem, and rural villages like Eyam, in Derbyshire, would remain sickness-free. But back then nobody knew how the disease was transmitted, and a bale of cloth delivered from London was riddled with plague-infected fleas.

Soon the villagers started to die. The vicar persuaded the community to seal itself off from the outside world, and thereby save neighbouring communities from infection. In return, those neighbours left food at the village boundaries.

Today Eyam is a peaceful place, although many of the houses still have plaques outside honouring some of the 260 fatalities. Stay locally in Bakewell, famous for its tart.

Doubles in its former railway station from £95 with breakfast.

There’s no definitive proof that King Arthur and his Knights of the Round Table actually existed, but moodily magnificent Tintagel Castle, up on Cornwall’s northeast coast, is certainly a place to fire the imagination.

The wind-battered ruin is on a bridge-connected island jutting out into the sea, and it fits the bill perfectly for Arthur and his gang of Lancelot, Percival, Guinevere and co. There’s even a cave for magician Merlin.

This part of north Cornwall is particularly mystical and druidical, and Tintagel village attracts the spiritually-minded, hungry for powerful crystals and witches’ brews, if the shops are anything to go by.

Stay just down the road behind the beach at Trebarwith at the Mill House Inn, doubles with breakfast from £85.

Bamburgh was recently voted Britain’s best coastal destination, and you can see why. With a grand shoreline castle, a village green, tea rooms, and a fine beach, it makes a pretty picture.

It’s the sort of setting where it is hard to imagine the brave life-saving exploits of a lighthouse keeper’s daughter in the teeth of a storm, but back in 1838, looking out of her bedroom window at 4.30 in the morning, Grace Darling spotted a ship being broken apart on the outlying rocks of the Farne Islands.

She raised the alarm and set out with her father in a rowing boat to rescue survivors.

Today there’s a museum in her honour in the village centre, with a handsome period hotel – the Victoria – right next door. Doubles with breakfast from £100.

The Undercliff and dinosaurs, Dorset

A walk through one of the largest coastal erosion systems in Europe is perfectly safe provided you keep to the Southwest Coast Path. The Undercliff starts east of Devon’s Seaton and extends around seven miles to Dorset’s Lyme Regis, through a rollercoaster of vegetation whose undulations are constantly changing thanks to landslips.

This is the Jurassic Coast, where fossils of creatures that once walked this way are regularly uncovered. In the Undercliff, with its carpets of ferns and fungi under a dense low ceiling of matted leaves, it is easy to imagine bumping into something Neolithic; certainly mobile phone reception can be Cretaceous.

Glencoe and the massacre, Highlands

Shortly after crossing the massive plateau of Rannoch Moor, about 90 minutes north of Glasgow, two massive shoulders of rock rise up and crowd around the A82 as it attempts to snake down to the sea.

This is Glencoe, a key strategic pass for anyone heading for Fort William and destinations north. It is a magnificent piece of scenery, its mountainous walls streaked with silver waterfalls, but it has a tragic past.

Back in 1692, Scottish government forces were billeted on the community of MacDonalds who lived in the glen. Once their hosts were asleep, the soldiers massacred 30 of them in their beds. This was seen as an act of outrageous treachery in an era where traditions of honour were highly prized.

Today there’s little opportunity to stay in the glen, but Kings House stands at the entrance. Doubles with breakfast from £150.

In Shakespeare’s tragedy, the three witches predict that Macbeth would only fail if Birnam Wood came to Dunsinane, something the king-murdering lord believed was impossible.

Today Birnam Wood still stands where it did alongside the River Tay, not far from Dunkeld, and a couple of its giant oaks feel old enough to have witnessed Shakespeare’s visit, back in 1599.

One is so big – 23ft around its waist – and so hollow that you can shelter inside it, to hide from any murdering aristocrats.

From here, cross the river at Telford’s bridge Dunkeld, and then walk north through an arboretum of exotic tree giants to where the elegant Dunkeld House Hotel presides over the riverbank.

Double rooms with breakfast from £155.

Tolpuddle and the Martyrs, Dorset

The village of Tolpuddle, due east of Puddletown, along the valley of the River Piddle (tee-hee!) sounds like something from a children’s story.

And indeed the place itself, with its village green and clutch of thatched houses, looks like a gem of tea-towel England.

Yet in 1834 this was the setting for one of the UK’s first labour force repressions, when six leaders of a perfectly legal farm workers’ union were convicted under an obscure law and deported, to Australia.

Two years later these Tolpuddle Martyrs were pardoned, and came back, and today their story is recorded in a village museum.

Stay locally at Piddletrenthide’s Brace of Pheasants, where doubles with breakfast cost from £115.