The surplus of Covid-19 vaccines in the U.S. has led to an unexpected boon for one of travel’s hardest hit sectors: inbound tourism. And the influx, mostly from Latin America, is bumping up against high demand for villa rentals and luxury hotels in already-tight markets like Florida.

New data from ForwardKeys, a British company that tracks global air ticketing trends, shows international bookings have soared since the Biden administration gave the OK for states to offer vaccines to visitors.

Texas, Florida and Arizona are seeing the biggest increase in bookings, the company said, with those from Latin America far exceeding 2019 levels.

“We are slammed,” said Felix Brambilla, CEO of Overseas Leisure Group, a Miami-based luxury tour operator that before the pandemic focused on inbound tourism.

While the company shifted during the pandemic to mostly outbound travel from the U.S., Brambilla said his Sao Paulo office began, unexpectedly, getting calls for vaccine tourism to the U.S. as soon as states began offering shots to noncitizens.

Since then, he said, his company has been booking 40 to 50 trips a day from Brazil. Most of those, he said, are looking for two-week vacations in Mexico or Costa Rica to meet the requirement that they spend at least 14 days in a country with lower infection rates before entering the U.S. Most want the Moderna or Pfizer two-dose vaccines, Brambilla said, so they also want to stay in the U.S. long enough to get both.

The result: trips that are pricing at around $35,000 per couple as hotel and private-home rental rates in popular destinations like the Florida Keys have skyrocketed in response to both domestic and international demand. For instance, in the Keys, he said, some hotels that are usually in the $350 range are now charging as much as $1,300 a night.

Brambilla said his company is also getting vaccine bookings from Mexico, although because of the proximity and lack of any pre-entry quarantine requirement, many of those travelers are doing shorter stays and returning to the U.S. when it’s time to get their second shot. 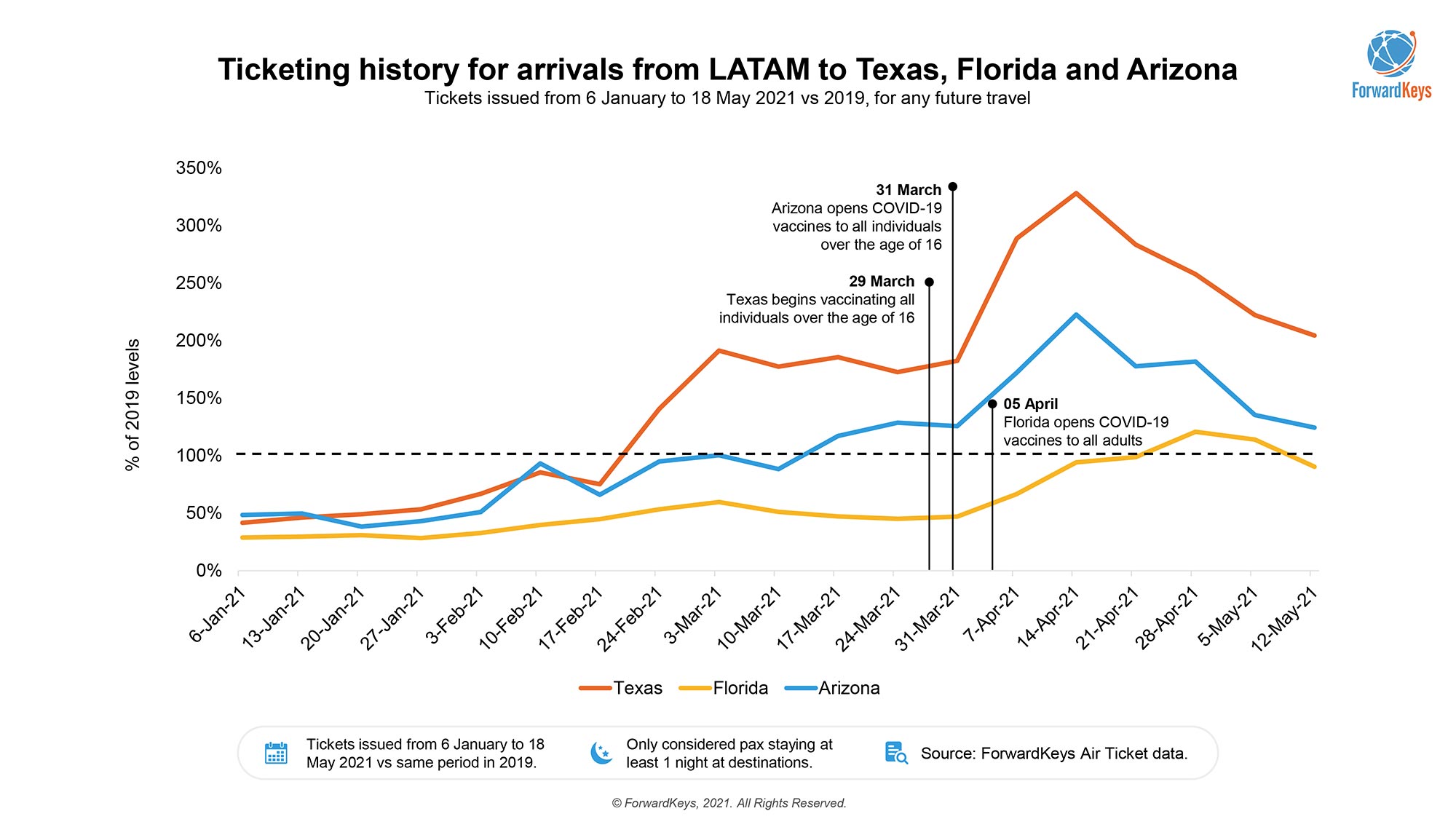 In Mexico, at least 50 Mexican travel agencies are offering vaccination packages, according to the newspaper Milenio. The Mexican Association of Travel Agencies told the paper that more than 120,000 packages at about $1,000 per person had been sold in the first two weeks.

And the president of the private aviation company Fly Business, Elliott Ross Surgenor, told the paper it had increased from three to nine the number of flights from Mexican airports to Texas to meet the demand for travelers seeking vaccines.

While his company, an inbound tour operator for Costa Rica, is not selling vaccine travel, he said a lot of Costa Ricans are indeed heading to the States for vaccines.

According to ForwardKeys, in the two weeks following announcements by states that they were opening vaccines to visitors, bookings from all international markets to Texas rose from 58% to 91% of 2019 levels; bookings to Florida rose from 44% of 2019 levels to 67%.

“As the pandemic progresses, we are seeing how closely linked vaccination is to tourism revival,” said Olivier Ponti, vice president of Insights for ForwardKeys. “Last month, we saw countries like Greece and Iceland, which declared themselves open to vaccinated visitors, gaining many more bookings than competitor destinations. This month, we are seeing the emergence of what could be called vaccine tourism, which is travel to a specific destination to receive a vaccination.”

The 15 Most Visited Cities Around the World