Home » Travel » Why Newfoundland is THE hot destination for 2019!

It’s the star of a new hit musical, home to giant icebergs and humpback whales, AND you can get there in time for lunch: Why Newfoundland is THE hot destination for 2019!

Ad Feature by Come From Away and Destination St. John’s

From its candy-coloured houses and thriving cultural scene to the arresting beauty of the surrounding wilderness, the city of St. John’s lies like a vibrant gem waiting to be discovered on the shores of Canada.

St. John’s, North America’s most easterly city, sits above a sheltered harbour on the island of Newfoundland, the last stretch of land before the vastness of the Atlantic.

It’s a place where awe-inspiring icebergs float by and humpback whales frolic in the wild ocean waters.

Brilliantly for British travellers, it is also much closer than you might think. St. John’s is just a four-and-a-half hour flight from London Heathrow – less than half the time it takes to get to Vancouver – so you can hop on a plane and be there in time for a fresh seafood lunch. 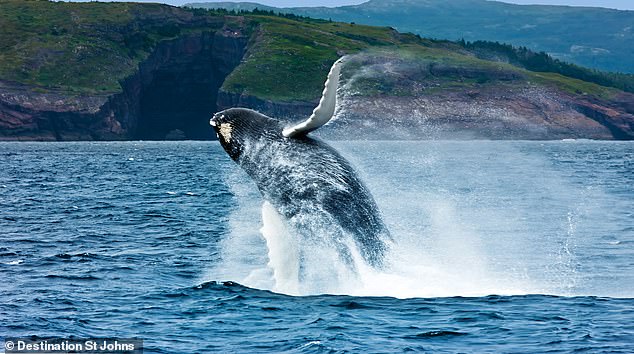 St. John’s, Canada, sits above a sheltered harbour on the island of Newfoundland – the last stretch of land before the vastness of the Atlantic. There lucky visitors can catch a glimpse of humpback whales beaching in the wild waters off the coast, pictured 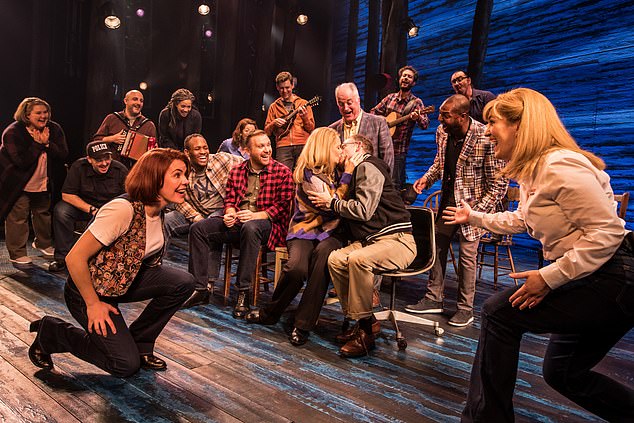 One powerhouse scene, pictured, shows the visitors getting to know the residents, and throwing themselves into local rituals involving kissing a cod and a local rum called ‘Screech’

Before booking your city break, why not get a taste for the charm and spirit of the region by watching the Tony Award-winning musical Come From Away, which opened to rave reviews at London’s Phoenix Theatre after taking Broadway by storm.

The heart-warming West End hit tells the story of the 38 planes that were diverted to the town of Gander, Newfoundland and Labrador, in the aftermath of 9/11 with 7,000 passengers and crew, including cats and dogs and a pair of chimpanzees.

Despite being ill-equipped to deal with the sudden influx, the selfless locals, marshalled by their mayor, were quick to help.

They opened their schools, bars and even homes to the newcomers – affectionately called the ‘plane people’ or ‘come from aways’ – giving them everything they needed, from fresh clothes to hot meals, baby food to toothbrushes, all without asking for a penny. 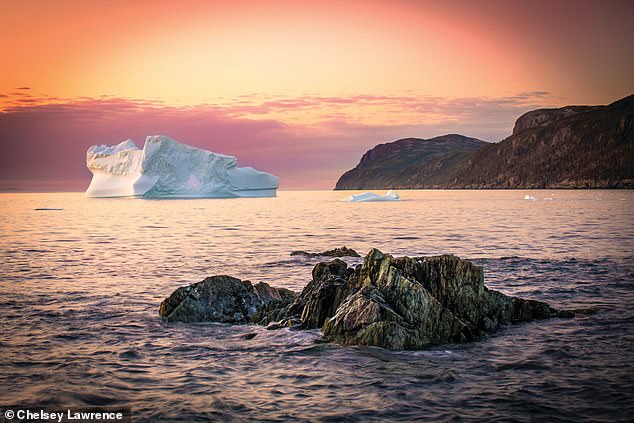 Visitors to Newfoundland and Labrador can also see 10,000-year-old icebergs float by each summer, pictured, while on their journey down ‘iceberg alley’ from Greenland to the warm waters of the Gulf Stream to the south 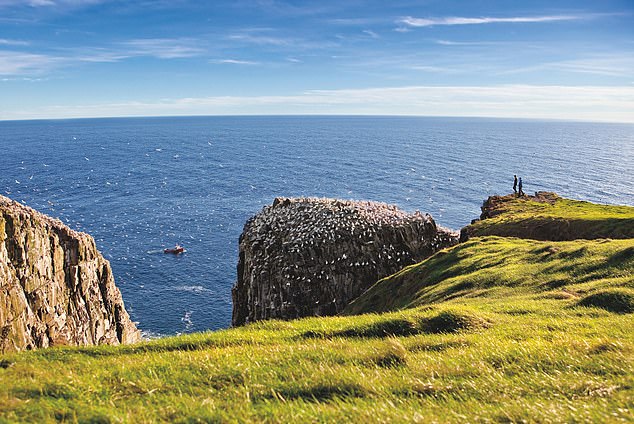 Vibrant St. John’s, which has been welcoming visitors for centuries, is a gateway to the natural beauty of the province – and is only a four-and-a-half hour flight from London. Pictured, the stunning view from Cape St. Mary’s

The joyous, life-affirming musical, written by husband and wife duo David Hein and Irene Sankoff and expertly directed by Olivier nominee Christopher Ashley, pays tribute to the value of human kindness and celebrates the quirks and character of Newfoundland and Labrador.

The audience learns how the local ice rink was used as a giant fridge for the extra food and how a busload of passengers had to slow for a meandering moose.

One powerhouse scene shows the visitors getting to know the residents, and throwing themselves into local rituals involving kissing a cod and a local rum called ‘Screech’.

And the entire show is driven forward by the pulsating energy of the Celtic-flavoured folk music so treasured by proud Newfoundlanders. 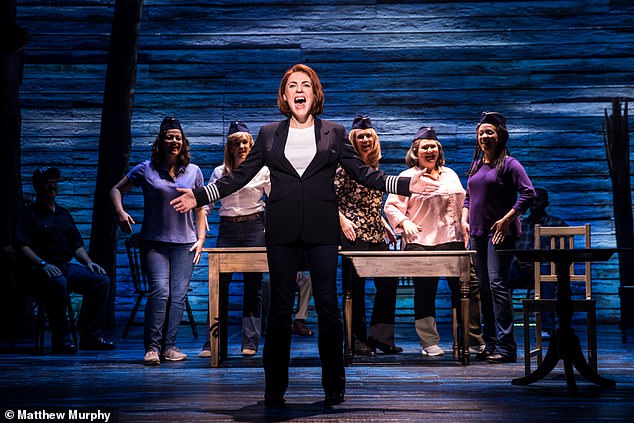 Come From Away tells the story of the 38 planes that were diverted to the town of Gander, Newfoundland and Labrador, in the aftermath of 9/11 . Actress Rachel Tucker as Beverley Bass, American Airlines’s first female pilot who was forced to land her plane in Newfoundland 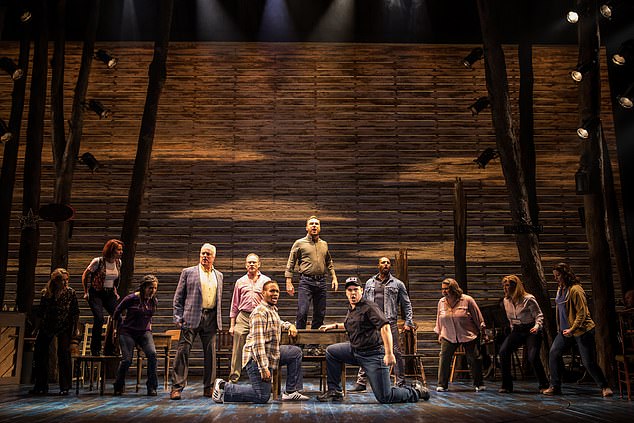 The charm and spirit of Newfoundland and Labrador is celebrated in Olivier Award-nominated musical Come From Away, pictured, which opened to rave reviews at London’s Phoenix Theatre after taking Broadway by storm

As in real life, by the time the characters board the plane at the end of the show, some had suffered devastating losses, others found their soulmate, but all left grateful to the brave and big-hearted islanders who had welcomed them at their time of need.

It is easy to understand why the record-breaking musical continues to capture the hearts of people around the world, just as the region – St John’s has been welcoming visitors for centuries – takes hold of everyone who visits.

While St. John’s is the largest city and capital of the province of Newfoundland and Labrador, it retains the feel of a buzzing small town that can be easily explored on foot.

Ready to learn more about the incredible story of Come From Away and the stunning location and hospitable people that inspired it?

Enter here for your chance to win a unique experience for two to see Come From Away, the new musical based on a remarkable true story, and a trip to Newfoundland and Labrador’s colourful capital of St. John’s!

First prize includes two tickets to Come From Away at the Phoenix Theatre, London, drinks and a programme and one night’s stay at a central London hotel, plus return air fares from London to St. John’s, Newfoundland and Labrador, and five nights in a four-star hotel, a whale, bird or iceberg boat tour for two (depending on season), Spirit of Newfoundland dinner theatre and a city tour.

Two runners up will win two tickets each to see Come From Away, plus programme and drinks at the theatre bar.

With its rows of colourful coastal homes, award-winning restaurants, and dynamic creative scene, it’s easy to understand why St. John’s has been likened to Reykjavik and San Francisco. And the city’s electric nightlife has won comparisons to Dublin’s Temple Bar.

Just a stone’s throw – and a short stroll – from the action, visitors can head out for hikes to encounter the wildlife on the city’s doorstep, or venture further afield to discover the natural wonder of Newfoundland and Labrador. If you’re lucky you might see grouse, beavers or even moose.

Meanwhile the waters are considered one of the most spectacular whale watching places on earth.

The world’s largest population of humpback whales return each year to feed on capelin, krill, and squid along the coast.

Visitors can also see 10,000-year-old icebergs as they pass by each summer, while on their journey down ‘iceberg alley’ from Greenland to the warm waters of the Gulf Stream to the south.

The unique combination of the two makes the Canadian island of Newfoundland one of the only places where you can see both humpback whales and icebergs.

Find out more about the show at ComeFromAway.co.uk or via @comefromawayuk

Ten predictions for the future of air travel ·

When will cruise ships resume sailing? A line-by-line guide