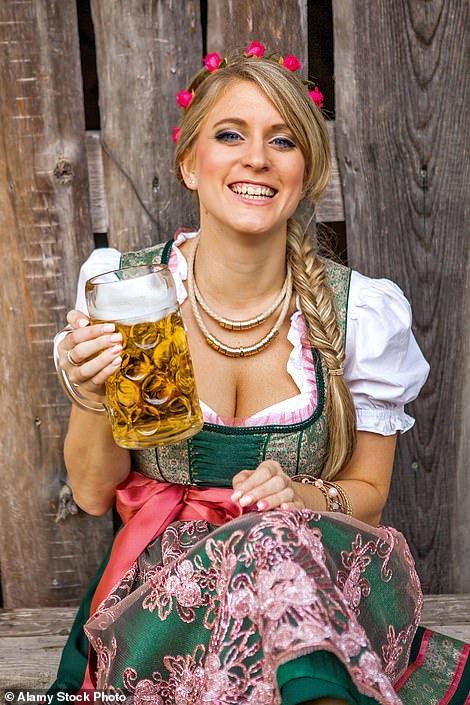 With much of Europe out-of-bounds for British visitors – city breaks, road trips or rural strolls in Germany provide an enjoyable and safe break. Pictured is a beer festival reveller

Regular visitors to Germany have long been familiar with Berlin’s monuments, the raucous nightlife of Hamburg, the annual ritual (in normal times) that is Munich’s Oktoberfest.

It’s just that not too many of us are regulars. And that’s plainly absurd because Germany is not just a great place to visit. In my view it’s a beacon for a troubled world.

I have been coming and going for the best part of three years and I’ve become ever more of an enthusiast. It’s not just that the place works well (we’ve always known that) but it’s also welcoming and open-minded.

What I particularly admire is the Germans’ emphasis on art and science, the modesty and seriousness of the political debate and the way they never take their freedoms for granted.

That’s why I decided to write a book called Why The Germans Do It Better — and to my delight (and a certain surprise) its popularity suggests that many Britons seem to agree with me.

This autumn — with much of Europe out-of-bounds for British visitors — city breaks, road trips or rural strolls in Germany provide an enjoyable and safe break.

Not least because the country has fared well during the pandemic with a far lower mortality rate than its European counterparts.

Yes, you can still find stodgy food and indifferent service, but most of the time you will receive a warm welcome, find excellent restaurants and reliable accommodation —amid beguiling castles, forests, lakes and hiking opportunities.

The destinations chosen here could be combined in a single journey or visited individually — or perhaps a few at a time on a road trip. However you choose to go, a visit to Germany at this time of year could be perfect to keep autumn blues at bay. 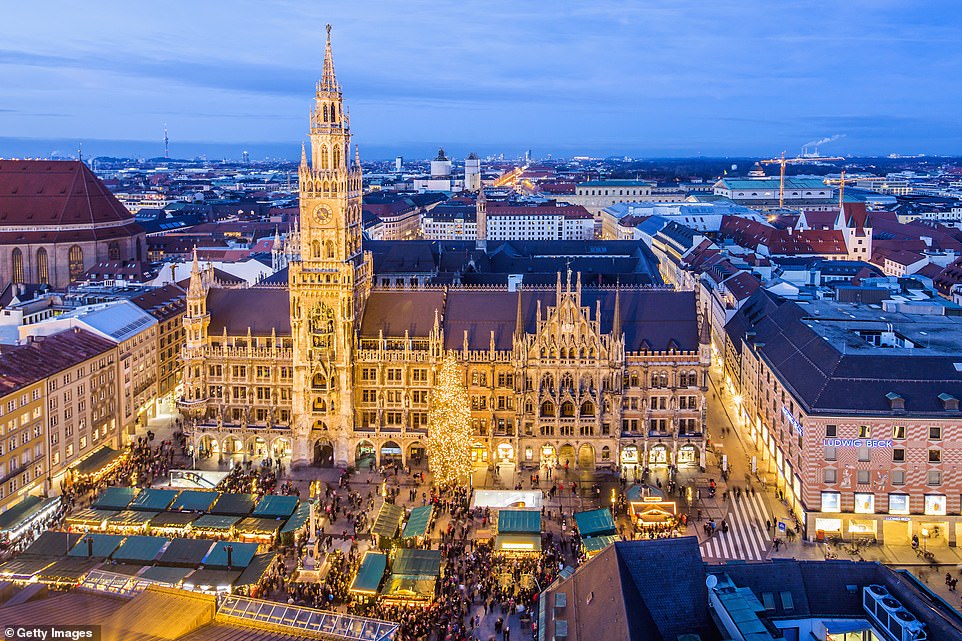 Lively: Munich’s Marienplatz. Just off this square you can find the Pfistermühle restaurant. Expect hipster beards, lederhosen and sausage

‘Traditionally different’ is the motto the Bavarians use to describe the Free State. Fiercely independent, this is Germany unvarnished and exuberant.

Bavarians love to party. Eating and drinking is what they do, dressing up in their customary outfits. Stop off at the Pfistermühle restaurant just off the Marienplatz for breakfast. Expect hipster beards, tattoos, lederhosen, tankards of beer and white sausage. Wunderbar food.

Then it’s time for some fine art. Munich’s three Pinakothek museums contain some of the world’s most impressive collections, split between the 14th and 21st centuries, including works by Leonardo da Vinci, Albrecht Dürer and Raphael.

Budget: Doubles at the slick, modern Motel One Munich-Olympia Gate from £63 (motel-one.com).

GETTING THERE: Gatwick-to-Munich returns from £65 (easyjet.com). 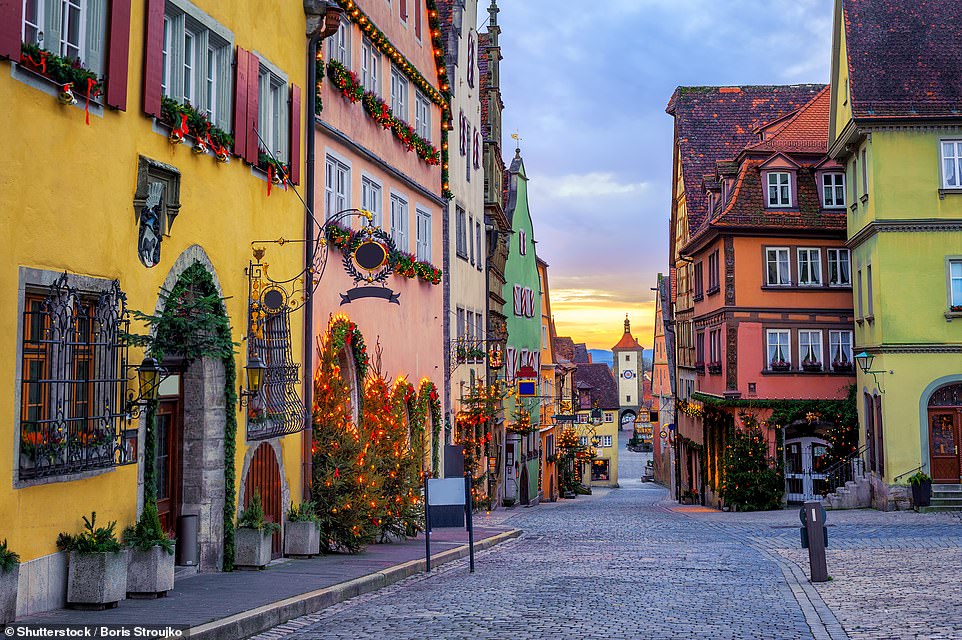 Rent a car in Munich for a road trip north to Rothenburg ob der Tauber. Stop off at Schloss Nymphenburg: a superb baroque palace and gardens that locals compare to Versailles.

Nothing, however, prepares you for the delights of the town of Rothenburg ob der Tauber in the Franconia region of northern Bavaria. This is picture-postcard Germany, dating from the tenth century, with more than 40 towers, impressive churches, and half-timbered merchants’ homes.

One of the highlights is the Night Watchman Tour by a certain Hans Georg Baumgartner.

Budget: Doubles from £90 at Mittermeiers Alter Ego, a smart little design hotel in the centre (mittermeiersalterego.de).

GETTING THERE: Munich to Rothenburg is a two-hour 45-minute drive. Or fly to Stuttgart from Heathrow from £64 return (eurowings.com) in one hour 45 minutes. 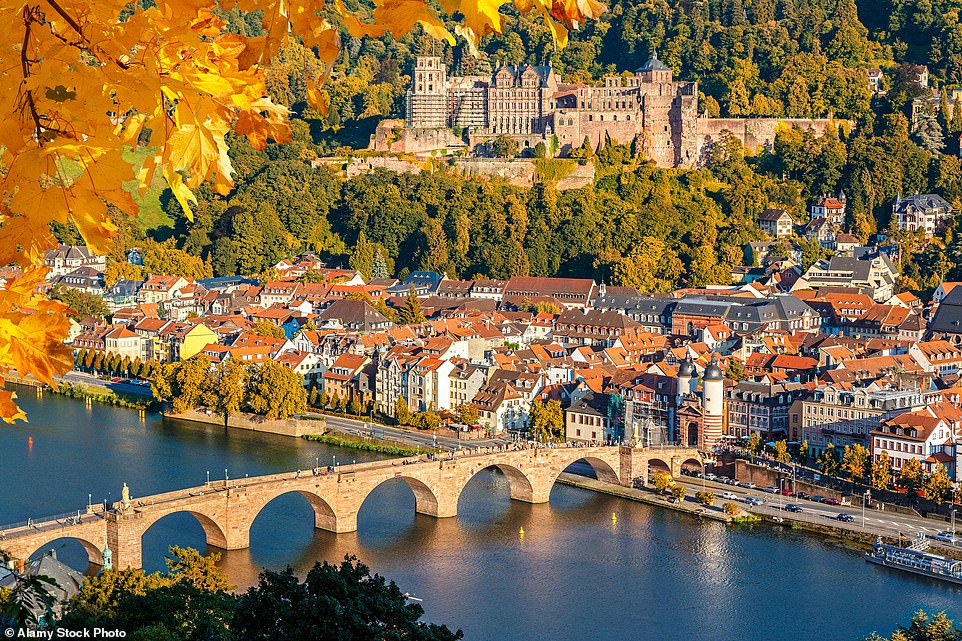 The serene town of Heidelberg, which is one of Germany’s most renowned seats of learning

GOOD TO KNOW BEFORE YOU GO

One third of Germany is forest: 11.4 million hectares with 90 billion trees.

There is no speed limit on most autobahns (motorways).

The country is home to more than 1,300 breweries.

There is a Barbie doll of Chancellor Angela Merkel.

Everything seems to work!

Students and professors pootle by on rickety bicycles along narrow cobbled streets passing churches, palaces and museums in Heidelberg, one of Germany’s most renowned seats of learning.

Walking, though, is the only way to see it, and the higher you go, the more you see.

On one side of the city is the beautiful Renaissance castle, one of Germany’s most visited tourist sites.

You can reach it by foot or by funicular railway.

The city is split down the middle by the Neckar River, where cruise boats vie for space with rowers and paddleboarders.

The other side of the bank is even more enchanting. Take an hour walk along the Philosophers Way footpath halfway up the hill.

Behind the walk is Heiligenberg, a steep hill studded with look-out towers, Celtic fortifications and monasteries.

Hidden away in the forest is a 10,000-seater amphitheatre called the Thingstätte, a folly built by the Nazis in 1935.

GETTING THERE: From Rothenburg to Heidelberg is a one-hour 45-minute drive. Or fly to Stuttgart from Heathrow from £64 return (eurowings.com) and it’s a 90-minute drive north. 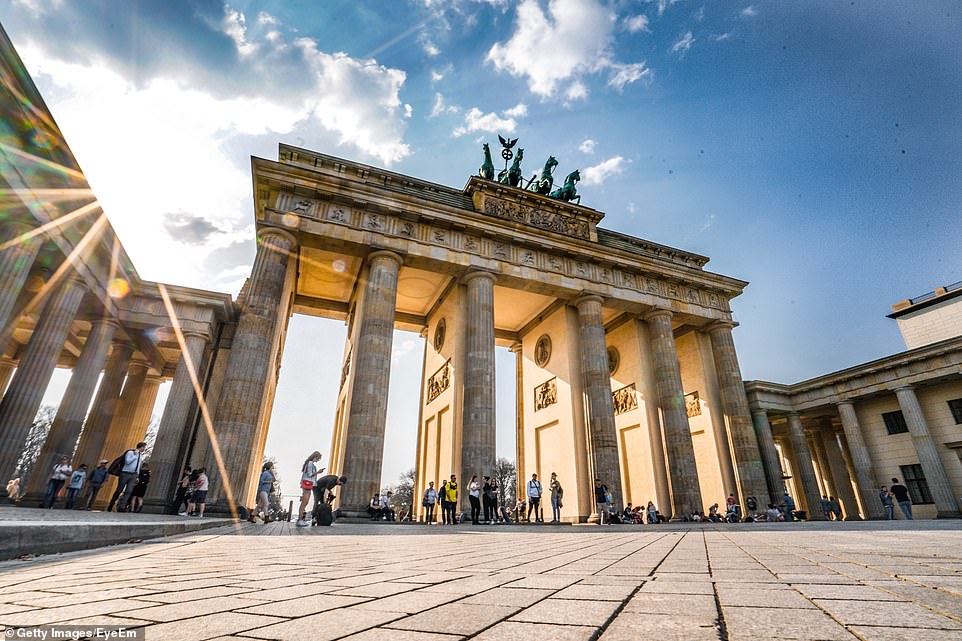 Impressive: Berlin’s Brandenburg Gate. First-time tourists to the city usually trace the Wall or wander down the great boulevards of Unter den Linden and Friedrichstrasse 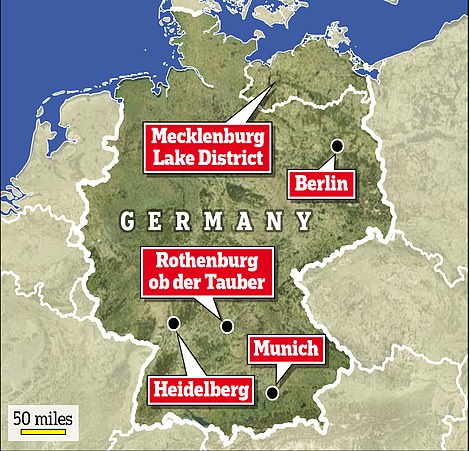 First-time visitors will walk through the Brandenburg Gate, trace the Wall or wander down the great boulevards of Unter den Linden and Friedrichstrasse. Or they may go to the shopping mecca of the Ku’damm, heart of the old western half of the city.

In the Scheunenviertel (Barn quarter) several barns for livestock were erected outside the city walls in 1672 by order of Elector Frederick William of Brandenburg. By the mid-19th century it was a slum.

Now it is the shabby-chic fashion and cultural heart of the city, containing boutiques and art galleries.

On Teufelsberg (Devil’s Hill) stands a series of giant dishes and antennae.

Here, the Nazis had begun work on the construction of a university faculty for military technology, part of their plans for Germania — Hitler’s vision for a modernist new city. It was never completed and was destroyed in the war.

GETTING THERE: Stansted-to-Berlin returns from £37 (ryanair.com). 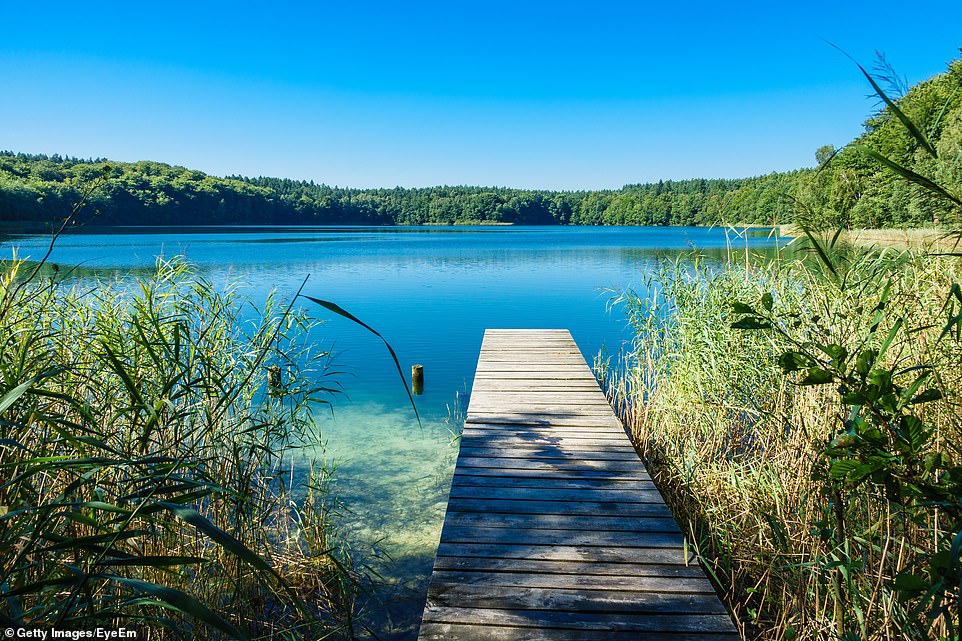 Natural wonder: One of the 1,117 lakes of the Mecklenburg region, which is a couple of hours north of Berlin

A couple of hours north of Berlin, by car or train, is an area of 1,117 lakes (precisely): the Mecklenburg Lake District.

Hire a canoe and glide past water lilies, or go riding, cycling or walking. One of the highlights are the cranes. Each year 50,000 of these remarkable birds migrate from Scandinavia to Spain via this spot. It is a sight to behold. For intriguing history visit Mirow Castle.

Budget: Two nights at Ferienpark Mirow in a lakeside holiday home from £100 (allseasonparks.de).

GETTING THERE: Stansted-to-Berlin returns from £37 (ryanair.com); it’s a 90-minute drive north in good traffic. 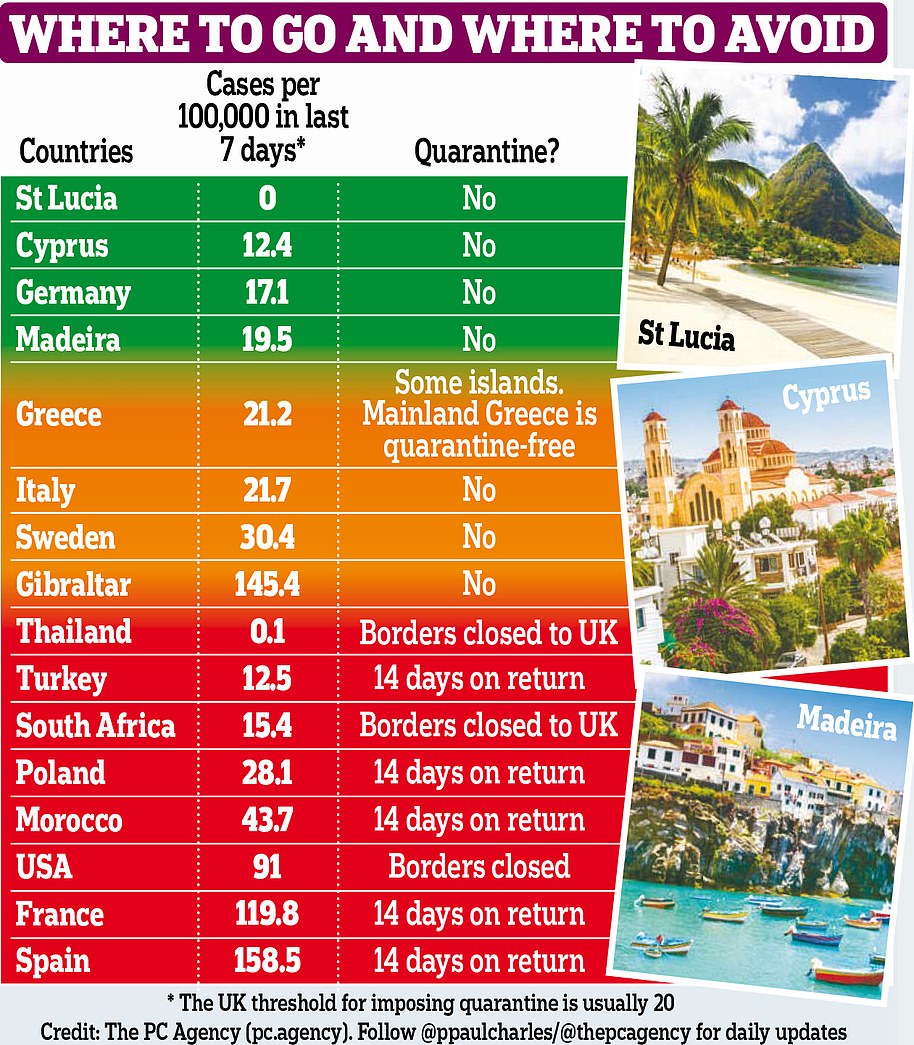 The country went from green to red on Thursday after Turkish officials admitted that the tally of cases it had been publishing only included those who had tested positive and had symptoms. Turkey had been proving hugely popular with British tourists in recent weeks, accounting for a third of all holiday searches made through the price comparison website TravelSupermarket.

Borders opened to international tourists, including those from the UK, for the first time since March on Thursday. All visitors must present a negative test and proof of an accommodation booking on arrival. But, unfortunately, Morocco is not on the UK’s travel corridor list.

After one of the world’s strictest lockdowns in which even dog-walking and the sale of alcohol was banned, South Africa welcomed its first international tourists on Thursday. Borders remain closed to British travellers, however, as the UK is currently classed as ‘high risk’. Visitors from low and medium-risk countries are required to present a negative test result. South Africa will review the data every two weeks.

One of just a few countries remaining totally quarantine-free, Cyprus remains a good option for a sunny autumn break. Cases are rising, but are well below the British Government’s threshold for imposing a 14-day quarantine on return. 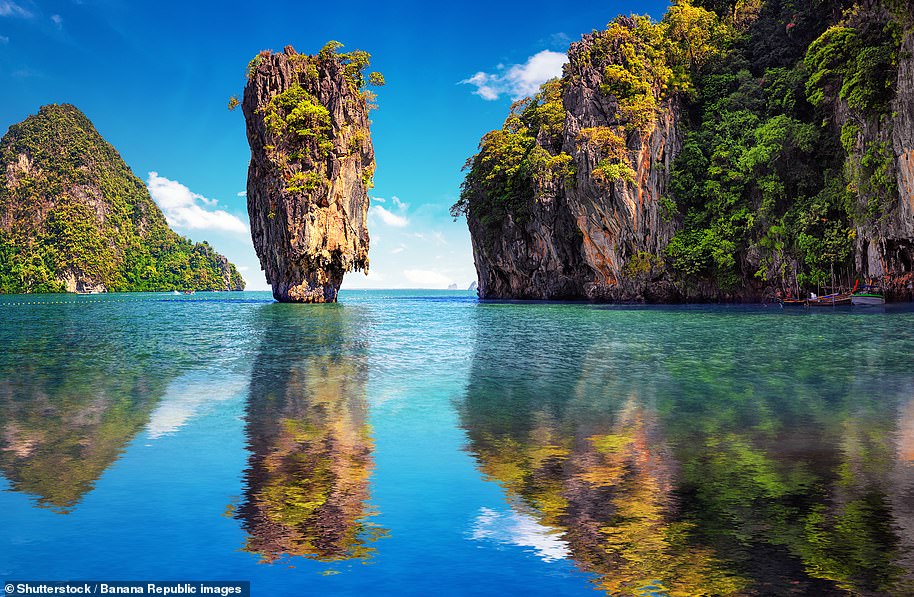 Thailand will welcome its first international tourists since April on Thursday when Chinese visitors are expected to arrive in Phuket, pictured

The popular South-East Asian country will admit its first international tourists since April on Thursday, when about 120 Chinese visitors are expected to arrive in Phuket. All will have to quarantine for two weeks on arrival and will be tested twice. Thailand, which is on the UK’s travel corridor list, has kept coronavirus infections low, with just 3,559 cases and 59 deaths.

Along with Turkey and the Caribbean islands of Bonaire, St Eustatius and Saba, Poland was removed from the UK’s travel corridor list on Thursday after its infection rate soared to 25.9 per 100,000, compared with 15.6 in the previous week.

The country’s infection rate has now passed 20 per 100,000, so it is likely to suffer the same fate as Turkey if this upward trend continues.

The government has imposed a new lockdown on Madrid after the region’s infection rate was seven times higher than the average rate in Europe. The capital’s residents are barred from leaving the city except on essential trips. Spain recorded 11,000 infections on Wednesday, 44 per cent of which were in the Madrid region, and 177 more deaths nationally.

11 luxury destinations that are cheaper than you think

The Best Airline Credit Cards of 2019