Palm Springs flows with glamour: Beloved by stars of stage and screen – and golfers – get set to be dazzled by this Californian honeypot in the desert

Marilyn Monroe’s legs are towering above me in a joyous, 26ft statue of the screen goddess by artist Seward Johnson.

It recreates her famous over-the-subway-grate pose from the 1955 film The Seven Year Itch and was erected last year outside the Palm Springs Art Museum.

The brazen, knickers-flashing sculpture has become a favourite photo-op for visitors to the Californian desert city where the 19-year-old beauty was discovered by a glamour photographer in 1945. 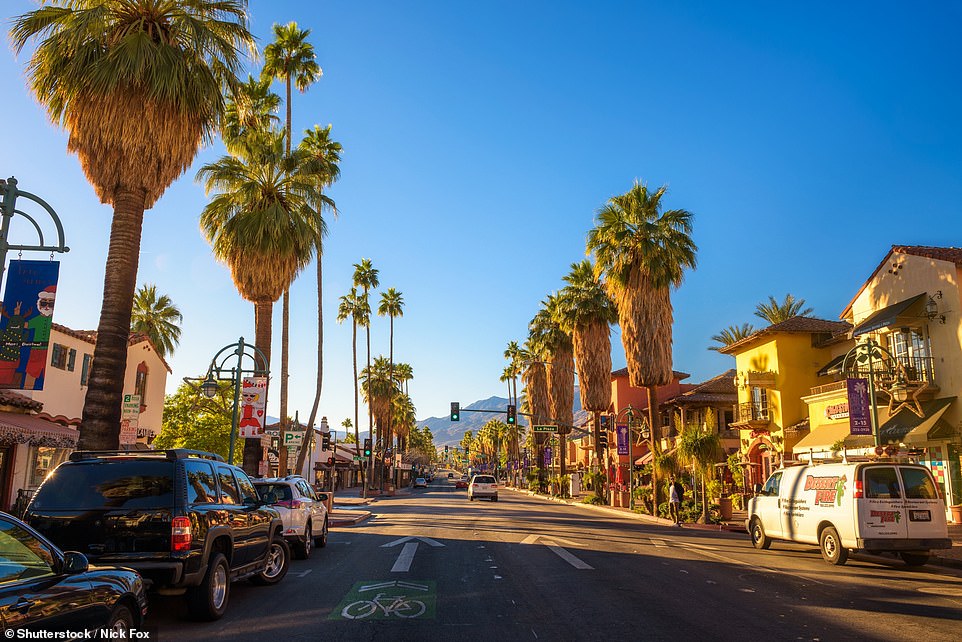 Nigel Tisdall goes on a tour of Palm Springs, a city east of LA that’s ‘all about pools, palms and golf courses’

Just 100 miles east of LA, Palm Springs took off because of a 1920s Hollywood edict that required actors to stay within two hours of its studios. Blessed with near year-round sunshine, it’s all about pools, palms and golf courses bordered by forested peaks with snow in winter.

Over the decades, thanks to this scenic variety and some well-preserved mid-century architecture, the city has proved a versatile location for filmmakers featuring in everything from Westerns and Arabian romances to James Bond films and the TV series Mad Men.

To tune in to this celebrity heritage, I sign up for a drive-by Legends and Icons tour with expert Annette Kesson from Five Star Adventures Tours. 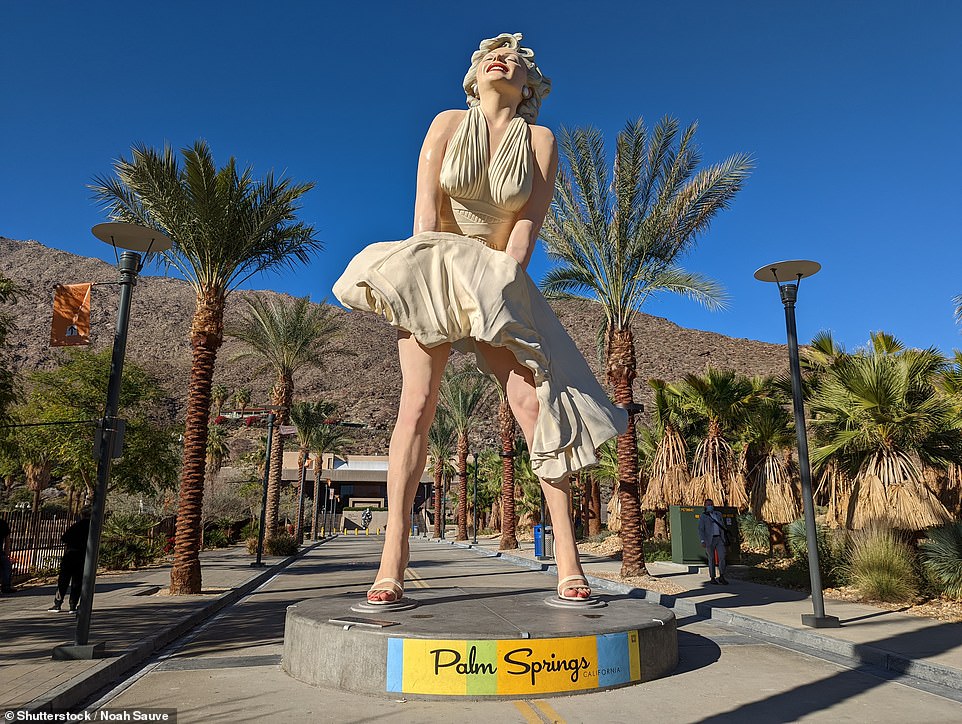 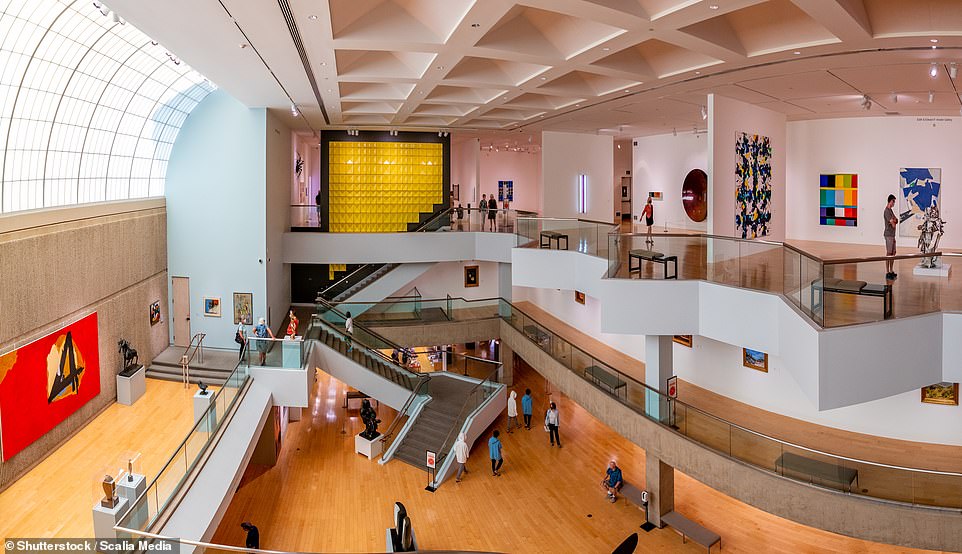 She points out plenty of surprises as we tour neighbourhoods with evocative names such as Movie Colony and Little Tuscany. There’s The Bridge of Thighs, an overhead walkway linking two parts of a naturist resort, and the home of socialite Zsa Zsa Gabor who had nine husbands yet lived to be 99.

We pause by the former residence of Cary Grant and Woolworth heiress Barbara Hutton, who was so rich the couple were dubbed Cash and Cary, and one of four once-glittering mansions owned by Liberace — ‘some people collect stamps’ he quipped.

Many hotels channel a vintage theme, such as Orbit In and Villa Royale, but for genuine old Hollywood glamour nothing beats the 30-room Ingleside Inn. Built in 1922 by the wealthy heirs to the Pierce-Arrow Motor Company, its cosy, whitewashed cottages, lawn-framed pool and complimentary 5pm margaritas are a welcome treat. 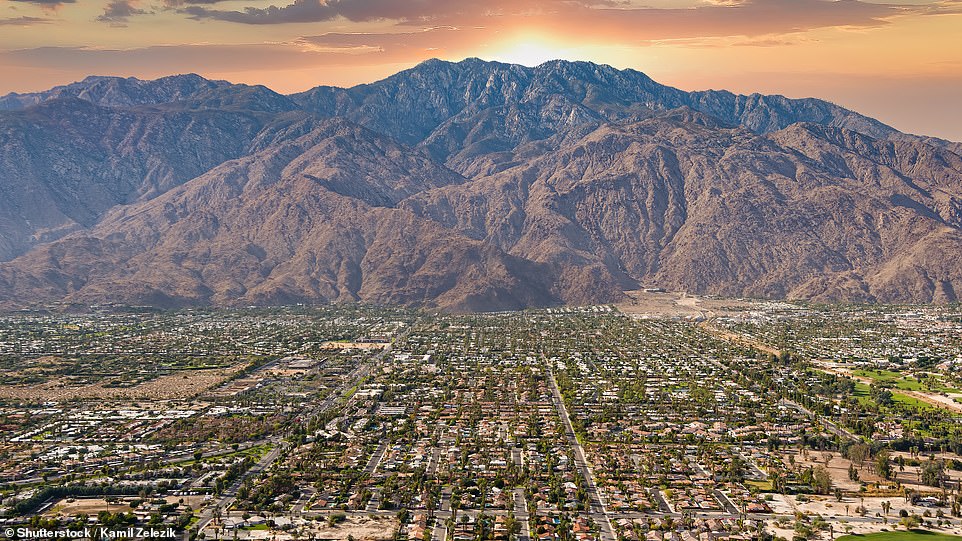 Over the decades, Palm Springs has proved a versatile location for filmmakers, featuring in everything from Westerns and Arabian romances to James Bond films and the TV series Mad Men

The restaurant is named after its charismatic owner for 41 years, Melvyn Haber, who chronicled the ‘colourful world of the caviar crowd’ in books he placed in the bedrooms for his guests’ amusement. They are rich with ‘only in Palm Springs’ moments, such as the dilemma he faced when all three ex-wives of Michael Landon, a star of the Bonanza TV series, turned up for dinner on the same night.

In 1976, Frank Sinatra held the pre-wedding dinner for his marriage to Barbara here and you can still dine at the table where he liked to hold court while enjoying a medium steak with a Jack Daniel’s on the rocks.

His first home, Twin Palms, was built in 1947 with a pool shaped like a grand piano and is now available to rent from $2,500 a night.

Back then life was so relaxed Ol’ Blue Eyes was listed in the phone book, as was a certain E. A. Presley as late as 1972. 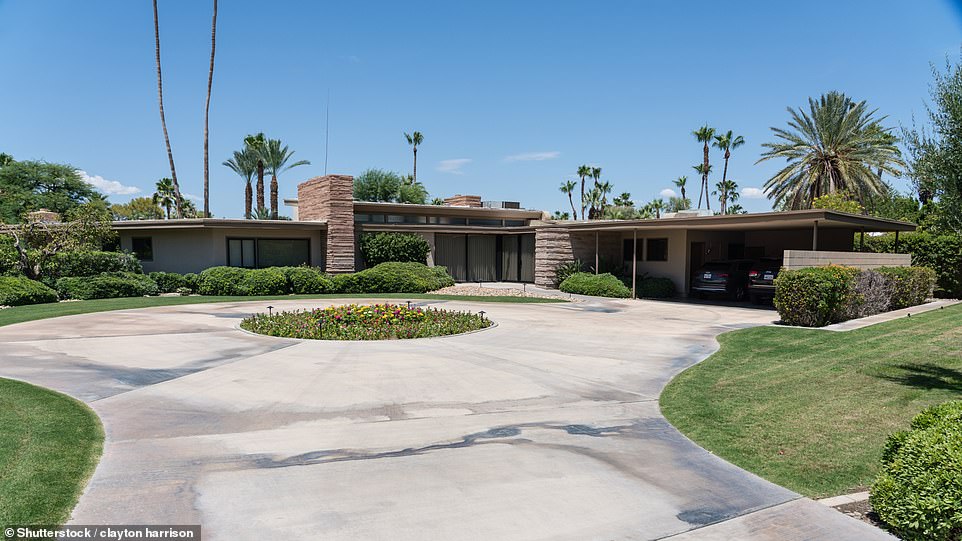 Frank Sinatra’s first home, Twin Palms (above), was built in 1947 with a pool shaped like a grand piano, Nigel reveals

As Haber observed, ‘celebrities beget celebrities, and they like to hang out together’. They also want to party, something Palm Springs still does very well as it fills up every weekend with drive-ins from LA and San Diego.

At the Purple Room in the Club Trinidad Resort, where the Rat Pack took to the stage in the 1960s, performers now revisit their classics to audiences sipping cocktails with names such as Cat On A Hot Gin Roof.

A turbo-charged country singer, Brian Scott, soon has us up and dancing and the partying peaks with a thundering song from yet another famous Palm Springs resident, Barry Manilow.

‘Her name was Lola,’ Scott yells, and for a blissful moment we all forget we are in a little box in the California desert and become showgirls at the Copacabana.

As Marilyn reflected: ‘It’s better to be absolutely ridiculous than absolutely boring’.

Mauritania, The Edge Of The Sahara ·