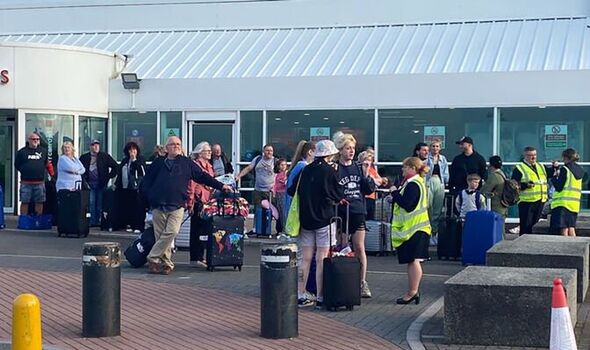 Flights to Ibiza and Dalaman have also reportedly been delayed by more than 24 hours. Passengers are frustrated with the lack of information and claim that people have been left with little or no food during their wait, Wales Online reports.

The Zakynthos flight was due to leave the airport at 2pm on Tuesday, but passengers were still waiting this morning (May 26).

However, they did board a flight on Wednesday evening, but a passenger was taken ill. The delay meant that it was too late to fly as the airport in Greece closes at night.

One passenger, who asked not to be named, said: “We were supposed to fly on Tuesday afternoon, they told us it had changed to 4.30pm. Then they announced about 5pm that they were rescheduling to the next day.

“We had to get our cases back. No names were out on the coaches, and there was no checking of names when we got to the Mercure hotel in Cardiff north, where they were putting us up for the night.

“We came back to the hotel at 7am on Wednesday when they told us it was delayed to 12pm flight.

“They kept delaying it then finally we boarded at 5pm was on plane for two hours then they said that somebody was ill so had to be taken off the plane .

“They then told us that the plane couldn’t fly to Zakynthos as airport closes overnight .

“Passengers were really upset refusing to leave the plane at this point.”

She claimed they had very little correspondence from TUI on Wednesday and were given not given vouchers for food.

She also claims that when some passengers were taken to hotels to wait for the flight, the hotels were full.

Adam Crawley, from Carmarthenshire, was also delayed. He said: “It’s been a comedy of errors by TUI from the start.

“I have seen elderly people in wheelchairs being loaded on and off buses to hotels for the past two days and shipped to hotels and back.

“The lack of communication has been farcical, completely pathetic.”

Dylan Le Clare, who is also due to be on the flight, said: “When the flight was cancelled for a second time there was no sign of TUI members of staff anywhere.

“The lack of communication was very worrying.

“There was no offer of vouchers for food and was told on certain number of hotel rooms were available.”

A flight to Ibiza has also been delayed at the airport. Holidaymakers were due to fly out at 6.35am on Wednesday morning, but passengers are still waiting for information on their flight.

One passenger, who asked not to be named, spent the night in a hotel in Bridgend after being told their flight would not be leaving on Wednesday (May 25).

She said: “Our flight was due to leave early on Wednesday morning and we were so excited as it is our first trip away without our parents, and we both worked through the pandemic so really needed a break.

“When we got to the airport, we were told there was a delay. We didn’t think much of it because there are often delays, but then the time kept being put back, and then we were told it wouldn’t be flying on Wednesday, and they took us to a hotel. We didn’t arrive until 1.30am.

“There are lots of families affected, but the passengers have been fantastic and looking out for each other. But there has been so little communication.

“We are now waiting to find out when our flight will be. We were only going until Saturday, so not sure what is going to happen.

“It has been horrendous. I just want to go home now.”

It is not just at Cardiff Airport that there has been delays. Holidaymakers at Exeter Airport have also reported delays of nearly 20 hours.

A spokeswoman for TUI said: “As the UK’s biggest holiday company we will never cancel flights as we know how much our customers look forward to their holiday with us. We are doing everything we can to limit any flight delays, which can happen from time to time for various operational reasons. On the rare occasion flight delays do take place we will do everything we can to support our customers.

“We would like to apologise for the inconvenience to our customers travelling from Cardiff Airport today which have been delayed due to technical issues with an aircraft.

“Customers have been offered overnight accommodation where required, and meals and refreshments. They also have the option to amend or cancel their holiday if they no longer wish to travel.

“The safety and wellbeing of our passengers and crew is always our highest priority, and we would like to thank passengers for their patience and understanding at this time.”

Cardiff Airport has said that safety and security of passengers is its “number one priority”.

A spokeswoman said: “We are sorry to hear that some passengers are currently experiencing delays to their TUI flights due to operational issues, medical emergencies and other circumstances outside of the tour operator’s control.

“This is a dynamic situation and we’re working closely with TUI to minimise disruption. TUI have advised us that they have been maintaining regular communications with their passengers throughout, and we appreciate customers’ patience and understanding during this time.

“n order to mitigate the impact of these delays, passengers were offered food vouchers and overnight accommodation in line with TUI’s customer service responsibilities.”

Spencer Birns, CEO Cardiff Airport said: “Please be reassured that the TUI and Cardiff airport teams are working exceptionally hard to assist customers and minimise disruption to passengers’ holiday plans. TUI has deployed a special assistance team to the airport, and it is working hard to advise customers of their revised departure times as quickly as possible”.

Holidays overseas to be made ILLEGAL – £5,000 fines for people trying to leave Britain

Ryanair Black Friday 2019: 20 percent off flights to Budapest this winter