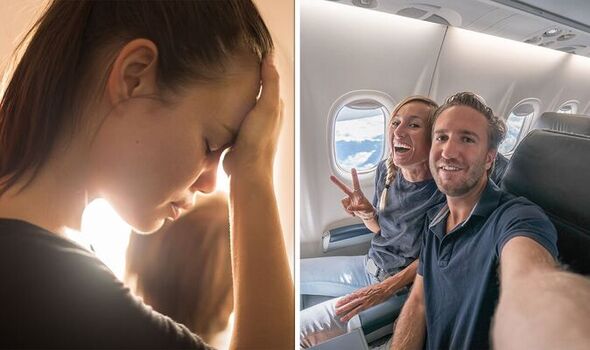 Twitter user and traveller @SJNeve explained: “Just boarded a flight and I’m sat with a couple and their baby, but the husband refused to give up his aisle seat so I’m now just… in the middle of them?”

He continued: “He stuck his headphones in, ate an entire pack of Haribo and didn’t talk to her for the entire two-hour flight.

“Very busy, full flight, unfortunately. Only a couple of hours, so no harm done – just a little odd!”

Another traveller, @ColumboIrish, replied saying: “Maybe it was a form of protest – blaming the airline for allowing this to happen.

“It was the airline that kept them apart – why should they each pay for reserved seats? They should be kept together as a matter of course. Once allocated you must take off and land in your own seat.”

Another one, @jfoster2019, opined: “Obviously hoped the middle seat wouldn’t be sold so could stretch out with baby… so pretty poor show by him, frankly! Any chance of moving or is it completely chockablock.”

One traveller, @NeilJensen87, shared: “Yeah I had this too. Dad would need the aisle seat for his fear of flying and would need to pace up and down at times throughout the flight and would be on Temazepam too.

“For me though… it was window seat or I’m staying home. Sorry for past middle seaters affected…”

Another one, @DWoodersonLIVIN, shared: “I’ve had this quite a few times with being stuck between couples.

“Always wonder if they do it because they hope the centre seat won’t be sold?

“Been asked to wake up someone’s partner before to ask for food and was then stuck in the middle of an argument as to who should pay!”

@LewisSteele_ said: “This happened to me on an 11-hour flight. A kind flight attendant moved me to business class for free where I sat next to someone with a huge phobia of flying.

“She grabbed my arm very tightly as we took off and was crying for the first two hours of the flight.”

Passenger @@CEO_UKTwinds suggested: “You should have spoken to the flight attendant. Personally, I am all for making some flights adult only.”

Another one, @blmbaz, disagreed saying: “Even before I became a parent I had the emotional maturity to deal with the inconvenience of a crying child. People need to seriously grow up.”

@glencoe1975 shared his story: “Me and my wife were on a half-empty 12-hour night flight.

“A large man sitting in our row did not want to move to an aisle seat even though there were plenty of other seats where he could stretch out.

“Told him I would need to keep waking him up to go to the toilet. He soon shifted!”

When a similar situation happens on board a plane, passengers are advised to ask the flight attendant to change seats.

On most flights, there are always a number of empty seats due to no-shows, or people who haven’t made it to the plane due to a missed connection.

Queen Elizabeth: Monarch refuses to do this one thing when she travels

Singapore Airlines gives Melbourne a taste of Wellington through VR ·