LA confidential: From watching movies in a graveyard to a breathtaking one-day road trip, here’s the City of Angels’ top ten secret thrills

First time in Los Angeles? Get ready for an awesome trip as you bounce between theme parks, beaches and Hollywood Boulevard.

Been before? LA won’t disappoint, even if you’ve ticked off Disney and spotted film stars. Dig deep into the City of Angels and you’ll find hidden histories, stunning architecture and the perfect, one-day American road trip. 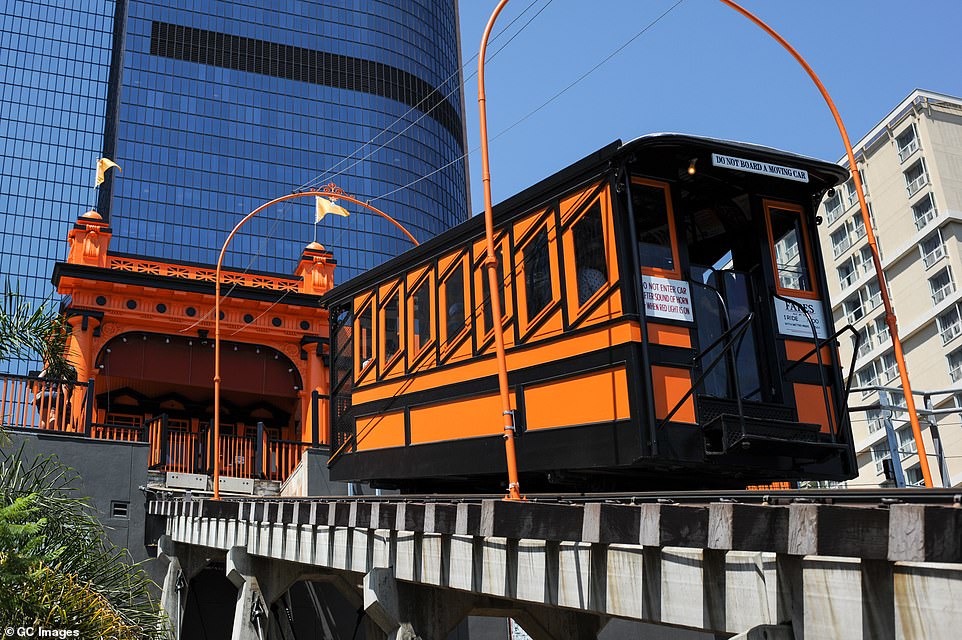 The Angels Flight, above, is a 118-year-old funicular that claims to be the world’s shortest rail journey

Forget theme-park rollercoasters and take a sedate ride on Angels Flight (angelsflight.org), the 118-year-old funicular that claims to be the world’s shortest rail journey. Emma Stone and Ryan Gosling made the trip in La La Land and the polished-wood interiors of its two railway cars have been regulars in films and TV shows. Ongoing maintenance issues mean it can close at short notice, but it aims to run daily until 10pm. It costs just $1 a ride and takes 30 seconds per ‘flight’.

If you’re hungry, the lower station is a few blocks from LA’s Grand Central Market (grandcentralmarket.com), the 100-year-old foodie heaven with everything from craft beer to ‘specially curated cheese’.

Take a break from the movies and put your head in a book at the biggest used-book store in California. Last Bookstore LA (lastbookstorela.com) on South Spring Street has more than 250,000 titles in its dusty, cavernous interior (plus a lot of vinyl in its record department). Rising rents in downtown LA mean it’s already been forced to move twice (its new slogan is: ‘What are you waiting for? We won’t be here forever’) and there are fears that competition from Amazon may soon force it to close for good.

Fortunately it’s easy to show support. Lots of books cost just $1 and there’s a full programme of readings and events in the evenings. 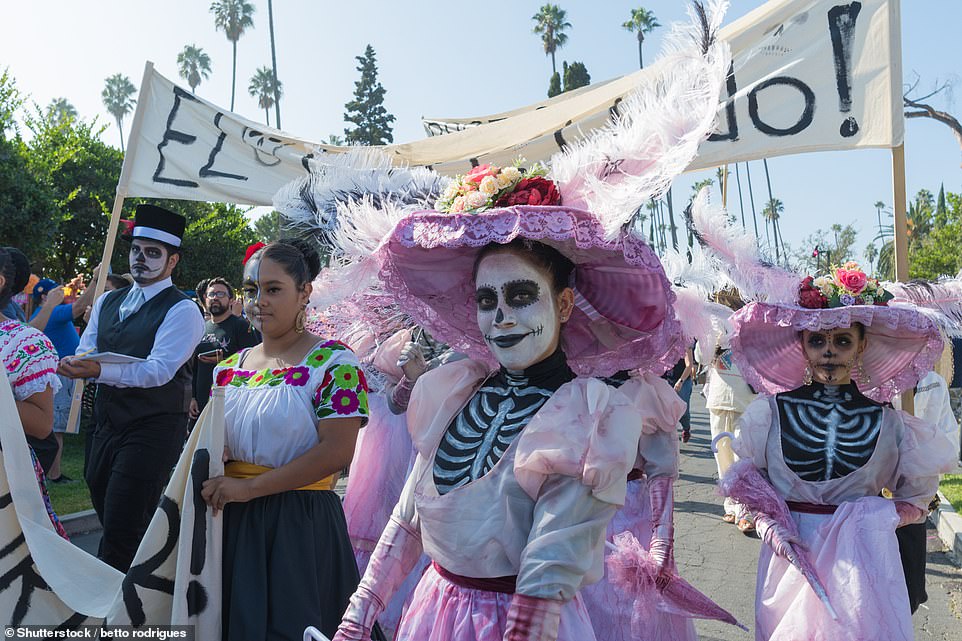 Graveyards are a big draw in LA. The most famous is Hollywood Forever Cemetery off Santa Monica Boulevard, where movie legends from Judy Garland to Cecil B. DeMille are buried. Surprisingly, the cemetery also has plenty of live music events (Hozier played in June) as well as regular ‘cemetery screenings’ with films projected on to the side of Rudolph Valentino’s mausoleum. Popular choices include Rebel Without A Cause or, if you are feeling brave, Bride Of Frankenstein or The Shining.

For Marilyn Monroe, Jack Lemon, Dean Martin, Frank Zappa and Burt Lancaster, head to the Pierce Brothers Memorial Park in Westwood. It’s a working cemetery, so visitors should be respectful.

Monroe’s grave is relatively simple, slightly discoloured by 50 years of lipstick-covered kisses from fans. Seeing-stars.com has more information under Where Stars Are Buried. 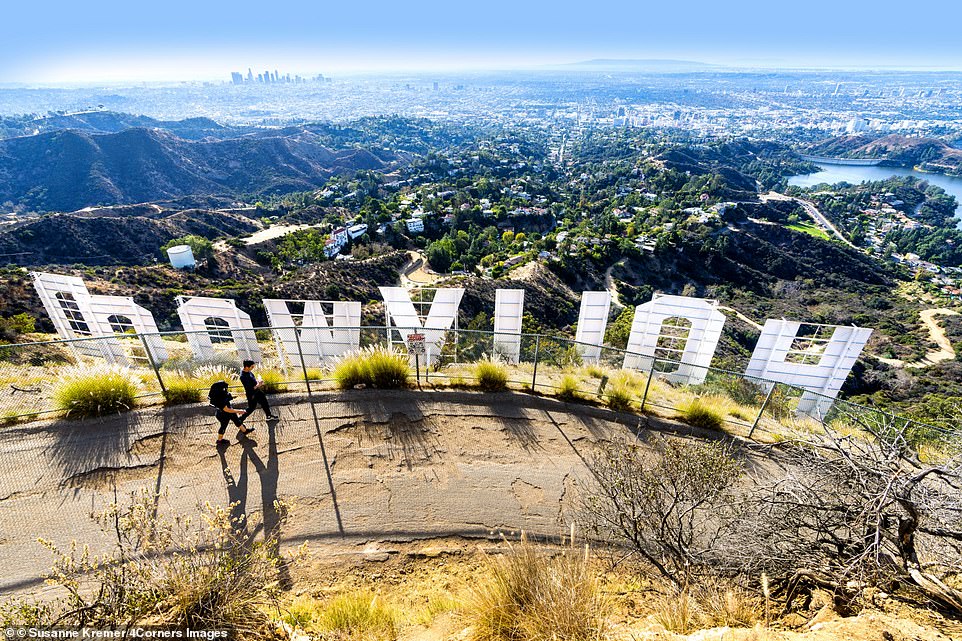 Venice Beach and its outdoor gym is the obvious place to see the body beautiful in action. But a short drive inland to the canyons is where Angelinos (including famous faces) go to hike, jog or walk their dogs.

Top spot is Runyon Canyon, a few blocks from Hollywood Boulevard. It has 130 acres of hills including a 90-acre ‘off-leash area’ for dogs which is a great place to see celebrities. You get three key hiking trails, from the easy Runyon Canyon route to the tough Hero Trail.

There are wonderful views of the Hollywood sign, the Sunset Strip and the Pacific Ocean. 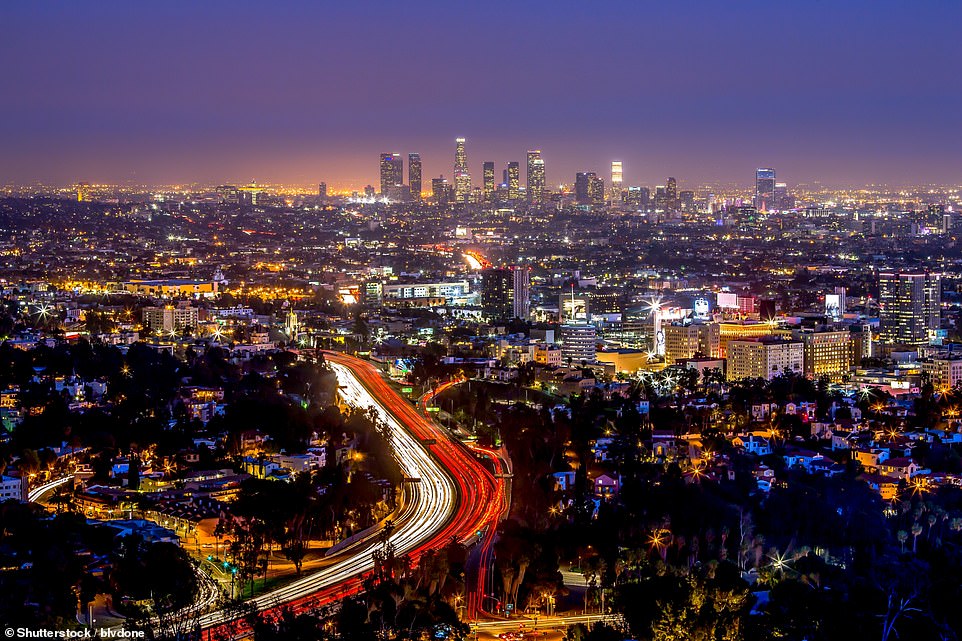 Dazzling destination: Step inside the original ‘home of Hollywood glamour’ (and the setting for many of the first Oscars ceremonies) at the Millennium Biltmore Hotel in downtown LA (stock image)

Step inside the original ‘home of Hollywood glamour’ (and the setting for many of the first Oscars ceremonies) at the Millennium Biltmore Hotel (millenniumhotels.com) in downtown LA. For almost 100 years it’s hosted everyone from Prince Charles and The Beatles to Howard Hughes and JFK.

It’s featured in The West Wing, Mad Men, Chinatown, Ghostbusters – and last year Taylor Swift danced on the reception desk in the video for her song Delicate. Recent guests say they’ve seen ghosts on the 2nd, 9th, 10th and 11th floors – as well as in several of the lifts.

There are two-hour guided history tours every Sunday (£12, book at laconservancy.org) or just walk through the vast, gilt-laden ‘beaux arts’ lobby on your way to getting a pizza, Chinese food or fine dining in one of its restaurants. 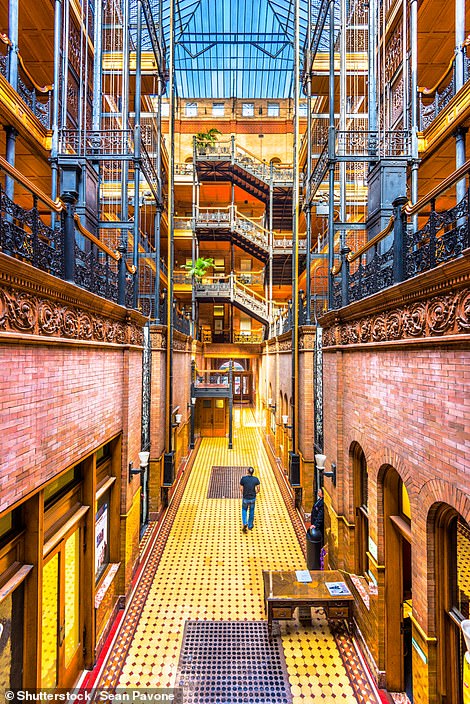 Starring role: The Bradbury Building, above, which appeared in Blade Runner

Architecture fans love LA – for mid-century homes to modern icons like the Getty Museum and the Disney Concert Hall.

But two smaller buildings are Instagram favourites. The first is the inside of the Bradbury Building, a gleaming, recently restored honeycomb of open-cage lifts, wrought-iron balustrades and interconnecting staircases. It’s been in everything from Blade Runner to the video of Justin Timberlake’s Say Something.

The next is the ‘Binoculars Building’ that Frank Gehry created in beachside Venice. Cars and people get in the building under the huge sculpture of binoculars that Gehry had built outside. Now rented by Google, 340 Main Street is repeatedly voted by locals as one of the city’s favourite buildings.

Hungry by the beach? Turn away from the boardwalk and experience Eggslut, the LA original restaurant that’s taking the world by storm. The deliciously dirty breakfast and burger firm opened its first London branch this summer. But it was born in LA. Join the line, gawp for celebs and try the Gaucho, a brioche bun with seared steak and, of course, an egg, at the Pacific Avenue branch in Venice.

Most California wines come from Napa Valley, north of San Francisco. But grapes are also grown on the outskirts of LA in sunny Malibu. Head to the Rosenthal Estate (rosenthalestatewines.com) just off the Pacific Coast Highway to combine wine-tasting with celebrity-spotting (it’s mega-rich Malibu, after all). Tastings start at about £15 and fans rave about the lines of food trucks that park up outside the vineyard in time for lunch.

Afterwards head to ‘Billionaire’s Beach’ (real name Carbon Beach), which looks private but isn’t. The discreet entrance is near the Malibu Aquarium and you’ll see gorgeous properties from the sand.

Sport comes second to cinema in LA. But the city isn’t short of iconic venues for world teams. The Staples Center is home of the LA Lakers basketball team, the LA Kings hockey players and more. Front row courtside is where you might get lucky and see the likes of Beyoncé and the Beckhams at games. Find out what’s on and get tickets at staplescenter.com – as well as a full sports programme, Disney on Ice is moving in for a week before Christmas.

Further across town, the iconic Dodger Stadium, one of the oldest in the US, is the local home of baseball. If you don’t want to see a game you can get to the pitch and into the Dodger dug-out on a 90-minute stadium tour, offered daily for £15 (mlb.com/dodgers). Or hang out in a local bar on game night (or any night) where sports fans can be more welcoming than at home. Local tips include The Gold Room, with its classic dive bar feel, and the trendier, exposed brick and mellow-light look at nearby bar The Semi-Tropic. 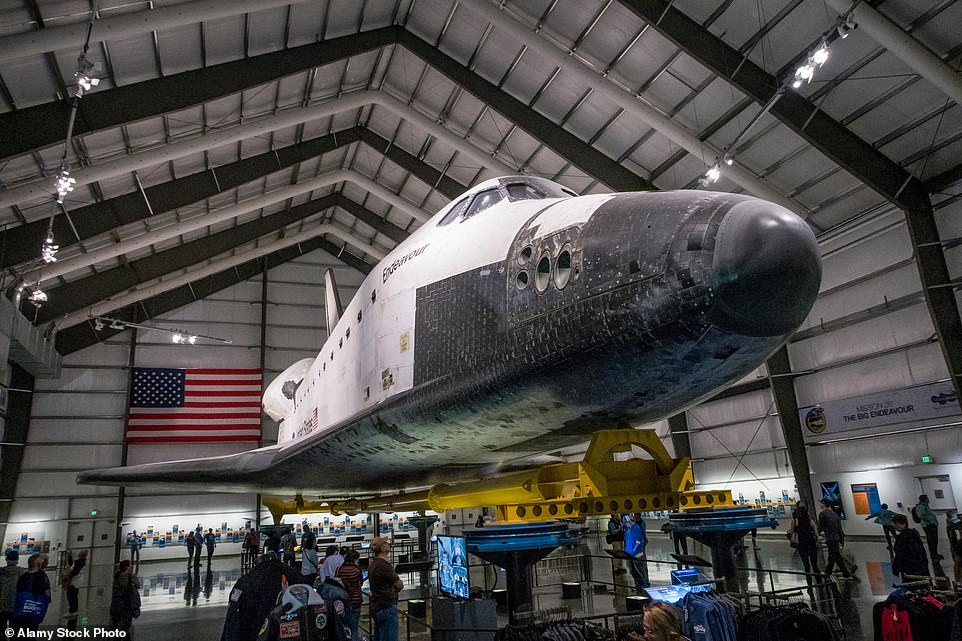 From Venice, hop on to the sparkling new, cheap and well air-conditioned LA metro (metro.net, trips start at about £1.30) and head to Expo Park at the University of Southern California, where you’ll find Endeavour, the world’s only intact Space Shuttle (californiasciencecenter.org). Endeavour completed 25 missions and orbited the Earth nearly 5,000 times. It’s now set in ‘ready-to-launch’ position in the University Science Center.

Your £5 entry ticket includes an IMAX screening and access to the rest of the huge museum. Children should enjoy the ‘SpacePotty’ exhibit that reveals what the curators describe as ‘the high-tech solution to one of space travel’s most pressing concerns’: how to use the loo in zero gravity.

However old you are, a walk round the nearby USC campus will make you feel like an American teenager and remind you of every college movie you’ve ever seen.

You can pick up a plastic tray and eat with the students in the main self-service restaurant area – and for dessert, walk past the campus store and look for the pink ‘only-in-LA’ cupcake dispenser ATM. Colourful, heavily iced creations are sold through an old cash machine (sprinkles.com).

Along the way there are plenty of ‘pull-outs’ where you can park for photo-stops, including a perfect view of the Hollywood sign. Check out the Harley-Davidsons with chilled-out riders (dubbed gearheads) who chow down at the classic Rock Store diner (rock-store.com) halfway through the day. Then keep driving west towards Malibu. The road will twist and the landscape will change fast as you pass cliffs, canyons and expensive movie-star homes on your way to journey’s end at the Pacific Ocean.

British Airways takes more passengers on the direct, ten-hour flight from London to LA every day than any other airline, with return fares from £310 this autumn and next spring. Virgin Atlantic’s Heathrow to LAX flights have similar fares and it also flies from Manchester. Norwegian has low-cost flights from London, while holiday firms such as Thomas Cook have flight-only seasonal deals from Manchester and other regional airports. For more inspiration on places to visit and what’s happening in LA, go to visitcalifornia.co.uk.

Southwest’s Hawaii Flights Are Coming Sooner Than We Thought