Up, up and away! We may not be jetting off for a while, but you can still take to the skies in a hot air balloon

It may not be the flight you’ve longed for during lockdown, but amid the gloom a hot air balloon trip is a brilliant way to lift your spirits.

Summer and autumn are the perfect seasons to take off, and there’s a fantastic choice available with more than 100 launch sites around the UK.

While James Bond used a hot air balloon decorated with the Union Jack to swoop in on an evil mastermind in Octopussy, adrenaline-lovers can use one to spy on London landmarks such as Big Ben, Tower Bridge, Buckingham Palace and even the MI5 HQ. 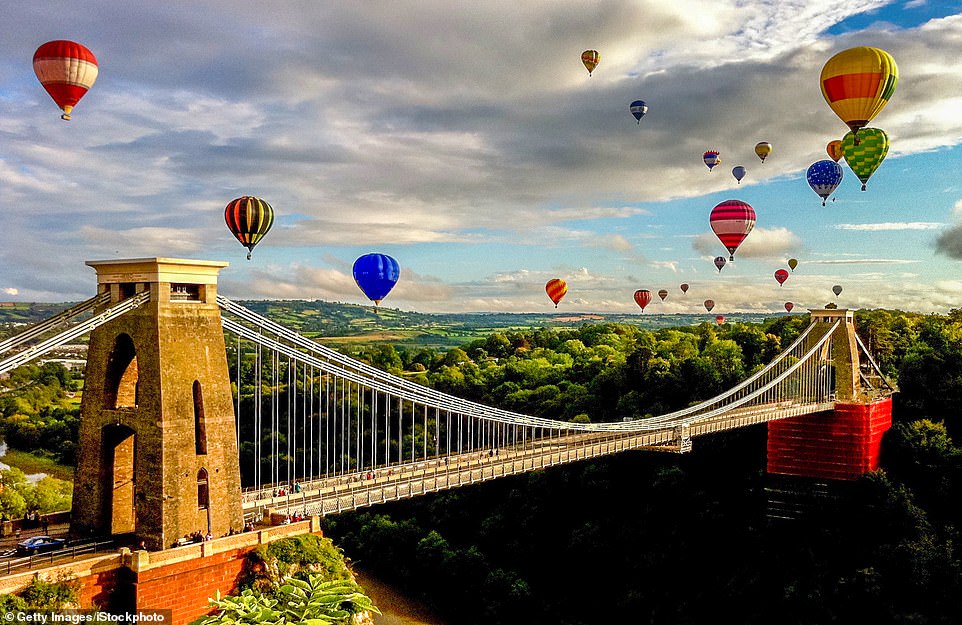 Rise to the occasion: Balloons fly over Bristol’s Clifton suspension bridge during the Bristol International Balloon Fiesta, which has been held in the city almost annually since 1979

It makes the capital one of the most enthralling destinations to encounter from above – just as long as you don’t get too close to The Shard… However, strict weather and wind-speed criteria mean the cancellation of flights over London can be frustratingly common, while air traffic restrictions mean they are allowed only on weekday mornings shortly after dawn (adventureballoons.co.uk).

If a proposal is in the air, then nothing could be more romantic than floating over the perfect location with your heads in the clouds (literally, if you go high enough). You can plan every detail, such as requesting your own song (Fly Me To The Moon?), a bottle of bubbly to be brought out if all goes well and, to celebrate your engagement when you come back down to earth, a champagne breakfast or romantic dinner.

Champagne balloon flights are now a popular way to toast an anniversary or landmark birthday, but in days gone by, French aristocrats carried fizz to use as a peace offering to appease any disgruntled farmers whose crops they often crash-landed in. 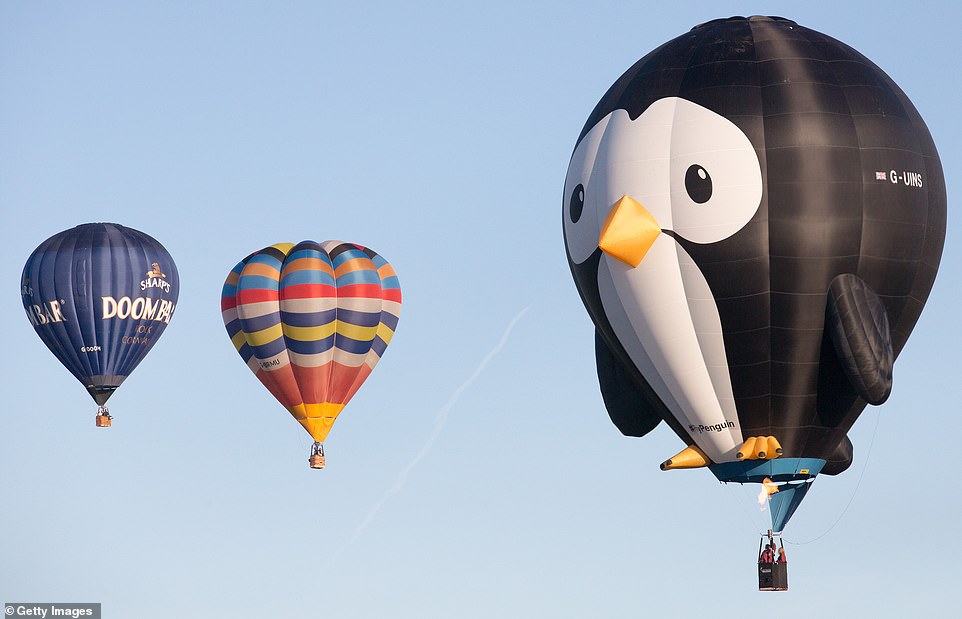 The Bristol International Balloon Fiesta, which attracts more than 130 hot air balloons from around the world, will return to Ashton Court from August 12 to 15 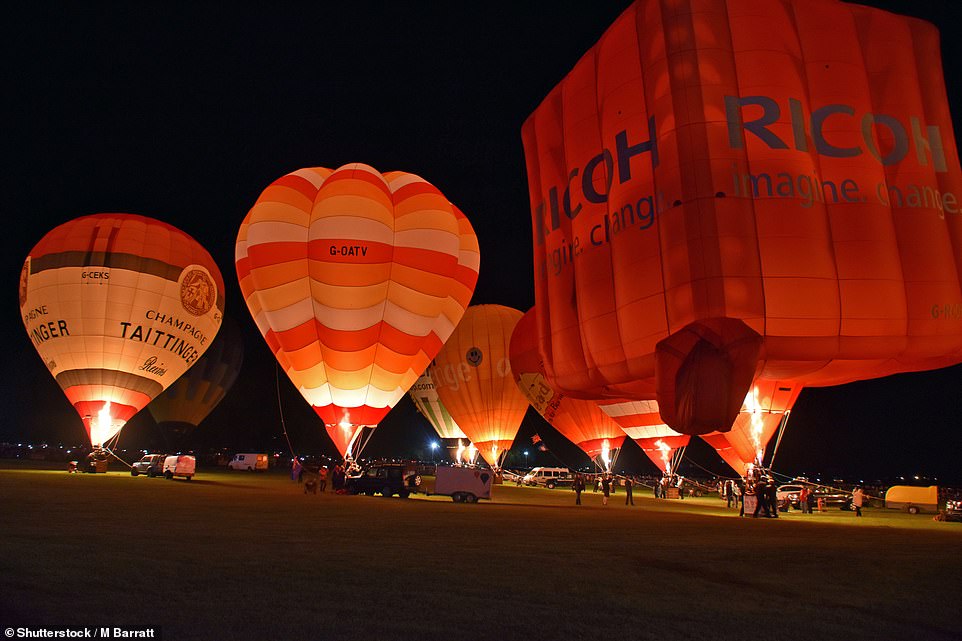 The annual Yorkshire Balloon Fiesta, which will be held at York Racecourse from August 27 to 30, will feature balloons of all shapes and sizes 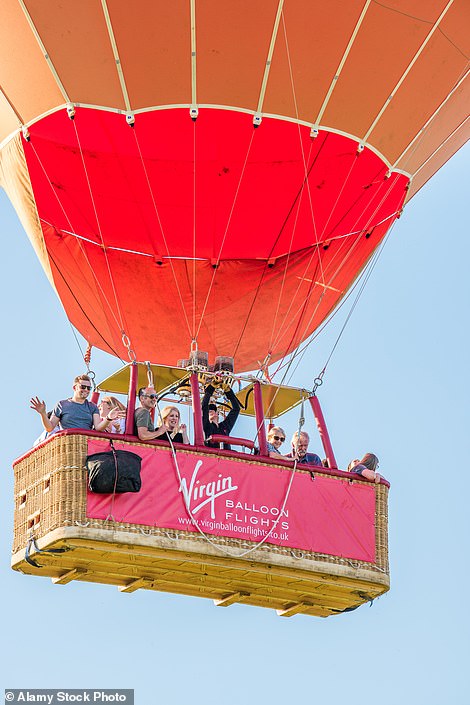 With Virgin Balloon Flights you can soar over the Lake District

But whether you want a flight à deux or would prefer to rise to the occasion with a party for up to 16 (Covid and age restrictions apply), there are baskets to suit from a venue near you (ballooning.co.uk).

York is already one of the most magical destinations to float above thanks to its city walls, historic Minster, former chocolate factories and boats on the River Ouse (yorkshireballoonflights.co.uk), but the annual Yorkshire Balloon Fiesta takes it to a whole new level.

Held at York Racecourse from August 27 to 30, it will feature balloons of all shapes and sizes, including cartoon characters, along with a funfair, live music and family entertainment.

This year promises to be the biggest and brightest yet, with the Balloon Night Glow followed by a new firework, drone and laser show (yorkshireballoonfiesta.co.uk). Bristol has put hot air ballooning on the map more than anywhere else in Britain.

In 1967, Bristol Belle, the first modern hot air balloon, soared off on its maiden flight from the city, while Bristol International Balloon Fiesta, Europe’s largest balloon festival, has also been held here almost annually since 1979.

This year the free event, which attracts more than 130 hot air balloons from around the world, will return to Ashton Court from August 12 to 15. The spectacular mass ascents at dawn and dusk offer a particularly memorable experience (bristol­balloonfiesta.co.uk).

Eye-catching landmarks in the area include Brunel’s Clifton Suspension Bridge spanning the Avon Gorge, the Bristol Channel, Avebury standing stones and spotting Wales to the north and the Mendips to the south. Specialists in the region worth trying include Bailey­ Balloons, Bristol Balloons and Elite Air.

But here is perhaps the perfect Father’s Day treat. Hop on a balloon ride over Kent from a launch site at Hop Farm Country Park near Tunbridge Wells – home to the world’s largest collection of distinctive Victorian oast houses that were used in the ale industry during the 19th and 20th Centuries. You can drink in aerial views of the rolling fields around Hop Farm, as well as vineyards at nearby wineries and the apple orchards at cider-makers.

From such a refreshing vantage point, it is easy to see why glorious Kent is nicknamed the Garden of England. You can even fly in a Spitfire Kentish Ale balloon and perhaps toast your journey with a pint rather than traditional bubbly (kentballooning.com).

United and Delta will offer daily flights to Iceland and Greece this summer, the first European destinations to open to vaccinated Americans