Azure waters, monasteries perched on dizzying rocky spires and impossibly quaint villages: Stunning images of Greece and the fascinating stories behind them

Greece is one of the planet’s most historically fascinating countries and one of the most photogenic.

This is a land of eye-poppingly dazzling beaches, monasteries perched on dizzying columns of rock and impossibly quaint fishing villages.

Many know it to an extent from the Mamma Mia movies, or a blurry ouzo-laced holiday.

For a deeper (and lockdown-friendly) understanding, we can recommend immersion in new book Greece: The Cradle of Western Civilization by Claudia Martin, published by Amber Books Ltd.

The tome, Amber says, is a photographic exploration of the country that gave birth to Western democracy and literature, taking the reader on a journey through time from antiquity to modernity and across landscapes, from the tallest mountains to the tiniest islands.

It’s a stunning collection of over 200 images, the publisher adds, that celebrates one of the world’s most popular destinations. And is, of course, superb inspiration for future trips. Scroll down for a tantalising taster…

ACROPOLIS, ATHENS: The word acropolis comes from the Greek for ‘high city’. The author explains: ‘This 490ft (150m) rocky outcrop, at the heart of modern Athens, was first inhabited in the fourth millennium BCE. The pillars of Hadrian’s Library, built by Roman emperor Hadrian in 132 CE, can be seen in the foreground’

VARLAAM MONASTERY, METEORA: In the northwestern Plain of Thessaly huge pillars of sandstone and conglomerate have been eroded by weathering along vertical faults, explains Claudia. She continues: ‘From the 14th century, devoted monks built monasteries on these rocks to avoid Ottoman attacks. Access was only by ladder or winch. Of the original 24 monasteries, six remain. Varlaam Monastery was founded in the mid-14th century by the exercitant Hosios Varlaam. All alone, he built three churches, a cell for himself and a water tank. The Katholikon (right) was built in the mid-16th century and lavishly decorated with frescoes and icons’ 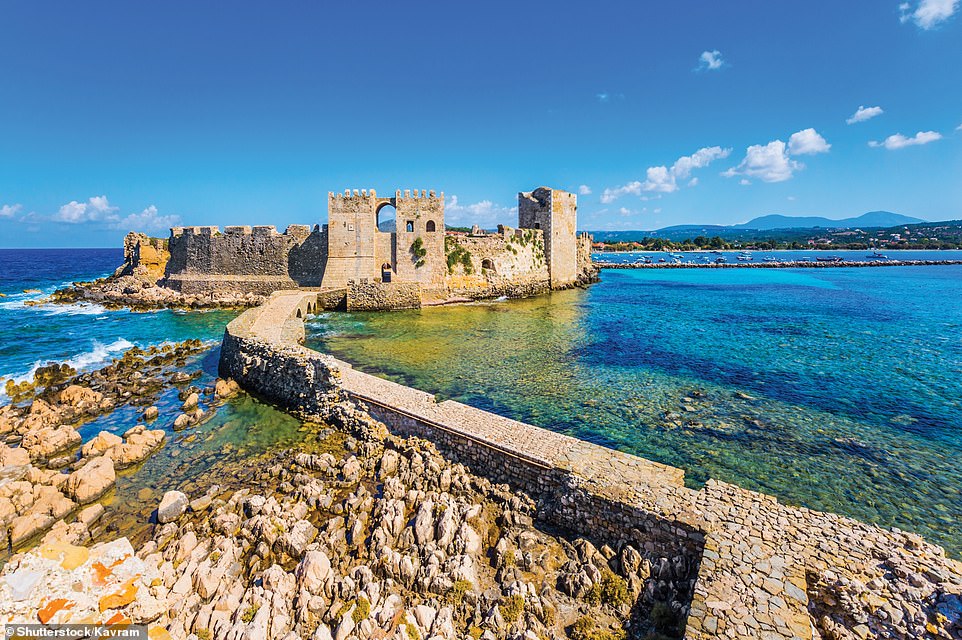 CASTLE OF METHONI: ‘In 1206 or 1207, Methoni was captured by the Venetians, who had long had their eye on the port as a stopover between Venice and their eastern markets’, writes Claudia. ‘They constructed a castle, large enough to be called a citadel, on a rocky promontory, separated from land by an artificial moat. Methoni fell to the Ottomans in 1500’ 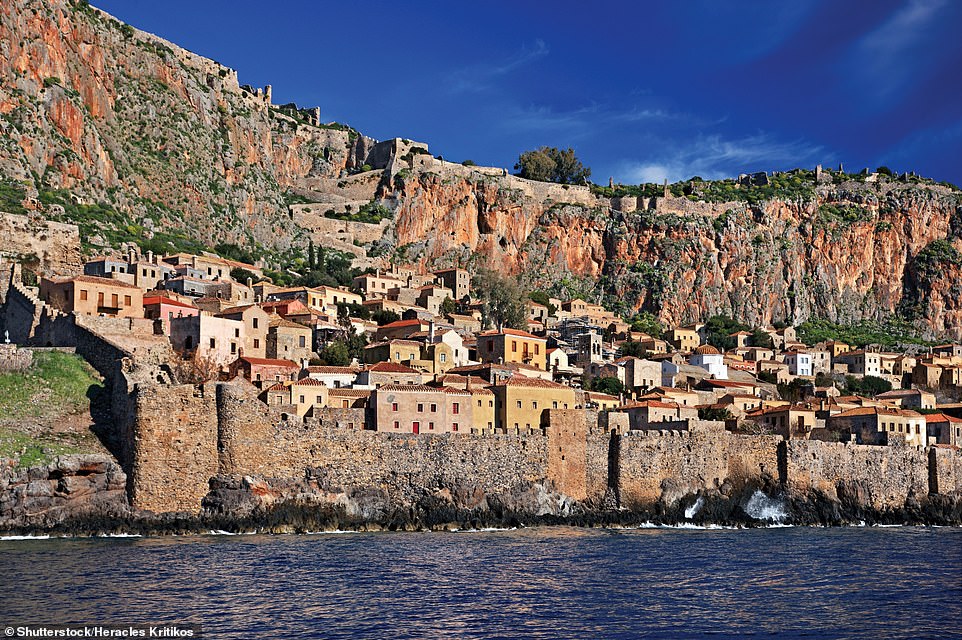 MONEMVASIA: Claudia explains that this fortified town, on a flat-topped rocky islet, is linked to the mainland by a 650ft (200m) modern causeway. She writes: ‘Monemvasia was founded in the sixth century by refugees from the mainland during the Avaro-Slavic invasions. From the 10th century, it became an important trading centre’ 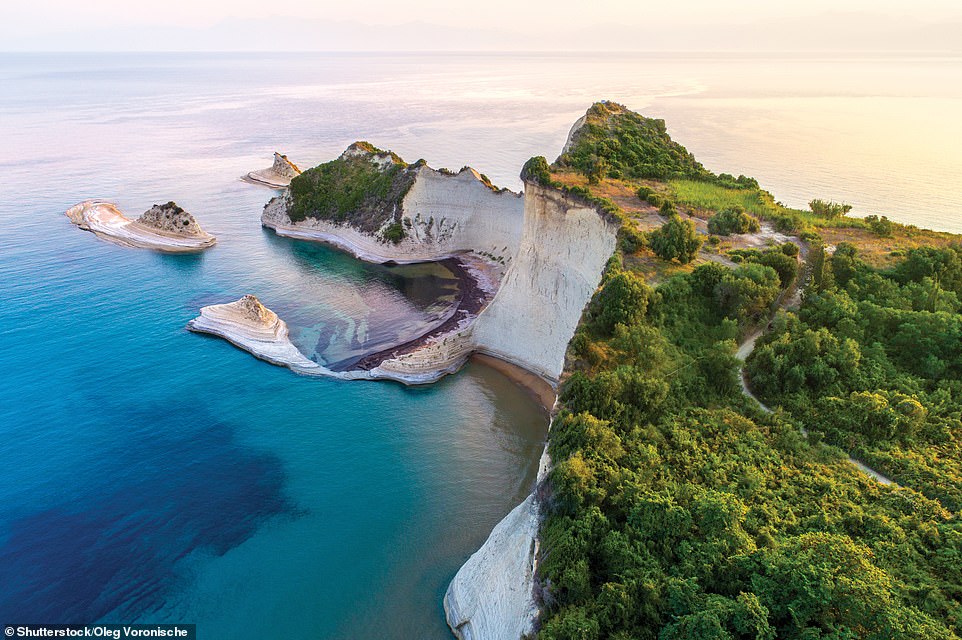 CAPE DRASTIS, CORFU: ‘At Corfu’s northwestern point is this wind-and wave-sculpted cape,’ writes Claudia, ‘said to resemble a mother turtle with her babies swimming alongside. It is not possible to descend the steep cliffs from the narrow road above, but the small clay and sand beaches can be reached by boat in good weather’ 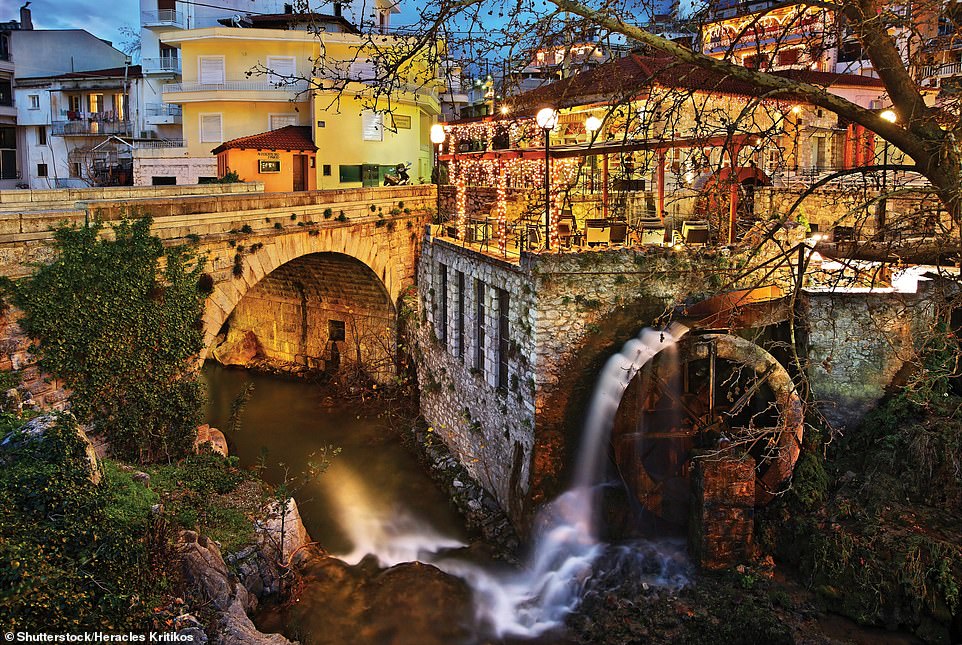 KRYA SPRINGS, LIVADEIA: ‘This pretty oasis is in the heart of Livadeia, today a modest town but in ancient times a famed spot due to the presence of the oracle of Trophonius,’ writes Claudia. ‘Trophonius was a god or mythological hero, or something in between. Whoever wanted to consult the oracle would live in a house in Livadeia for a set number of days, bathing in the waters of this river and sacrificing to the gods. Finally, they would descend into a nearby cave to hear the words of the oracle, an experience that seemingly frightened most out of their wits’ 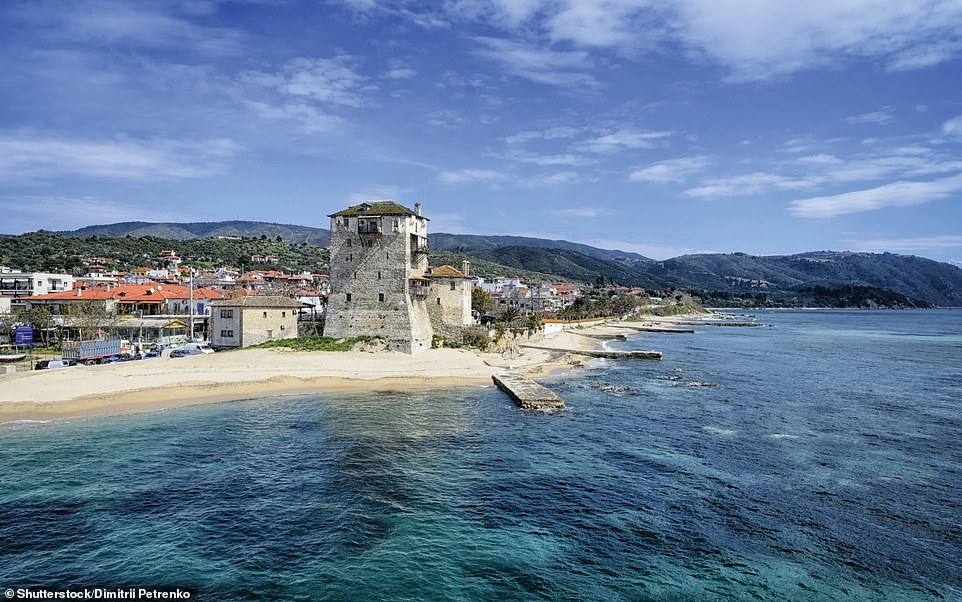 OURANOUPOLI: The modern village of Ouranoupoli is on the site of ancient Uranopolis, a city said to have been founded by Alexarchus of Macedon in the third century BCE, explains Claudia. She adds: ‘The tower overlooking the beach was built in the early 14th century by monks from a nearby monastery, to watch over the sea for impending attacks. The upper two floors were rebuilt by the Ottomans’ 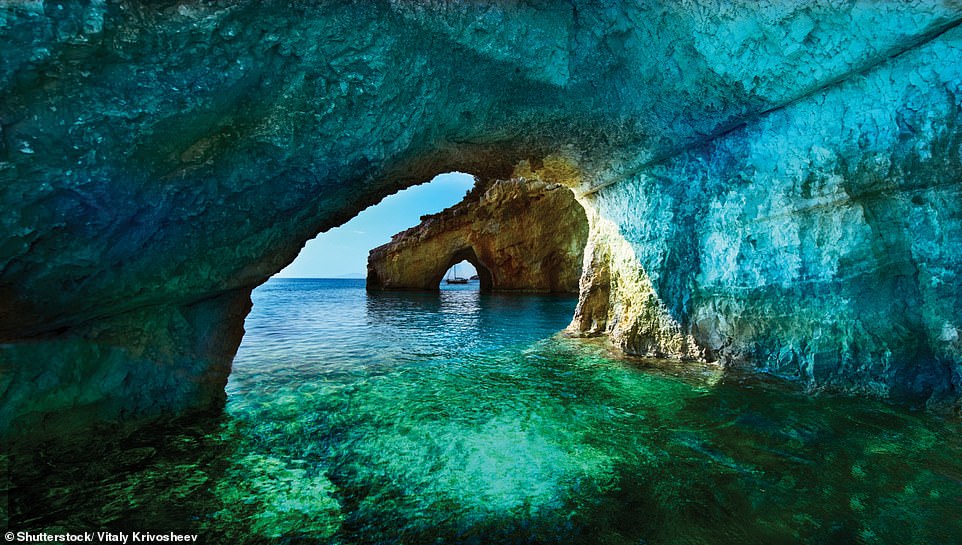 BLUE CAVES, ZAKYNTHOS: ‘At Zakynthos’s northernmost point, below the lighthouse at Cape Skinari, the waves have sculpted arches and caves into the cliffs’, notes Claudia, who adds: ‘Glittering reflections between turquoise water and pale limestone walls seem to turn everything and everyone that enters the water an otherworldly blue’

MATALA BEACH: According to the book, the many caves in the cliffs at Matala were dug from Neolithic times. The author writes: ‘Judging by their size, they were probably used as dwellings. In the 1960s, the caves were occupied by hippies from around the world. Canadian folk singer Joni Mitchell wrote her 1971 song Carey about her time with the Matala hippies, with “filthy fingernails” and “beach tar” on her feet’ 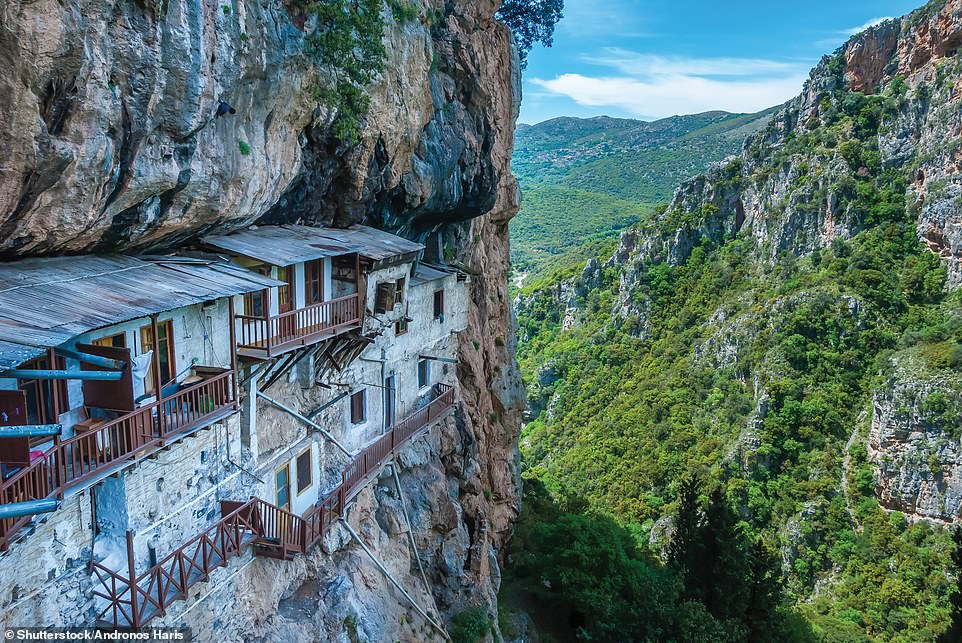 PRODROMOU MONASTERY, LOUSIOS GORGE: This 16th-century monastery is dedicated to St John the Baptist. Claudia writes: ‘It clings to the cliff of the deep, nine-mile (15km) Lousios Gorge, near Stemnitsa. The Lousios Gorge is known as “the Mount Athos of the Peloponnese”, due to the many monasteries that perch in its shelter’ 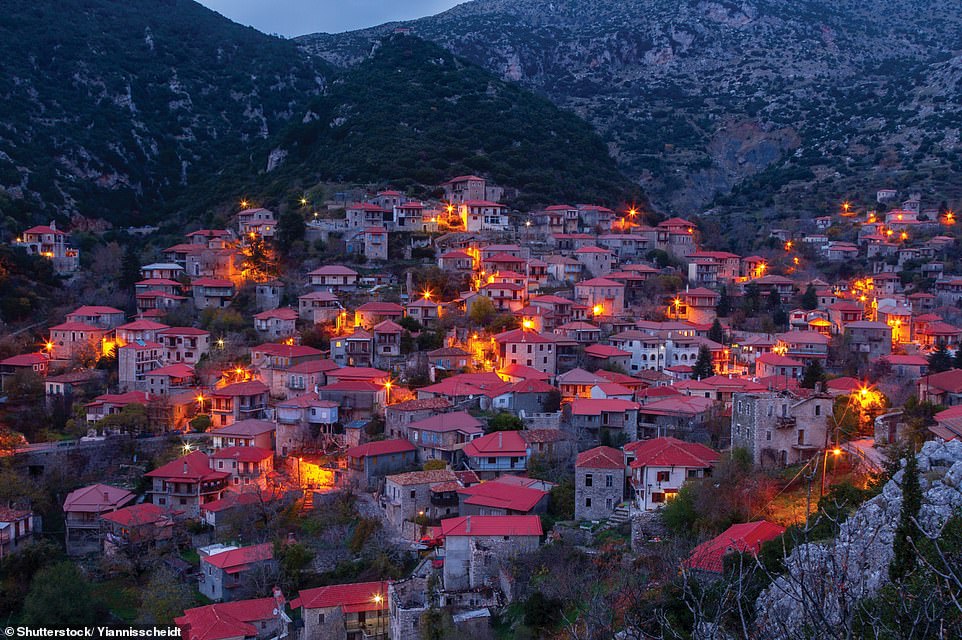 STEMNITSA, LOUSIOS GORGE: ‘The village of Stemnitsa huddles at an elevation of 1,050m (3,450ft), hemmed in by the Mainalo Mountains,’ says the author, who adds: ‘The name of the village comes from the Slavic for “woodland”, signalling the Slavic roots of many of the villagers, whose families arrived in the 7th and 8th centuries’

MILOS: ‘The southwesternmost island in the Cyclades is volcanic in origin, with soft, easily eroded tuff among its rocks. Caves, stacks, arches and blowholes are common along Milos’ rugged coast,’ says the author. ‘The island was an important commercial centre in antiquity. It was here the so-called Venus de Milo statue was found, depicting Aphrodite the goddess of love. The work was probably carved by Alexandros of Antioch between 130 and 100 BCE’ 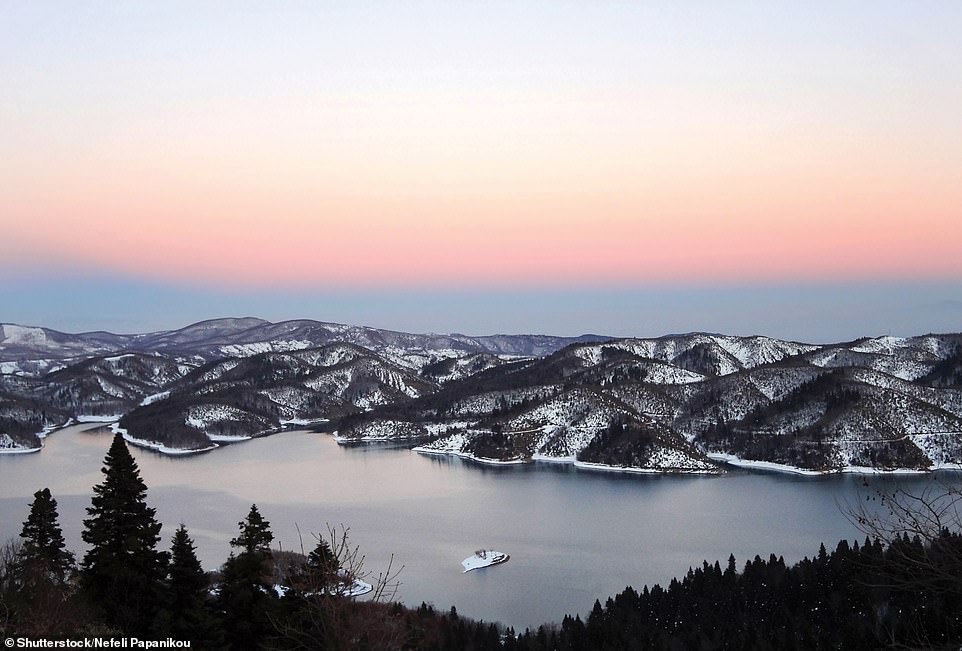 LAKE PLASTIRAS: ‘This reservoir is named after the Greek prime minister Nikolaos Plastiras (1883–1953), who first suggested the project. A 1960 concrete arch dam prevents flooding of the River Tavropos while providing hydroelectric power and water to the nearby city of Karditsa,’ writes Claudia 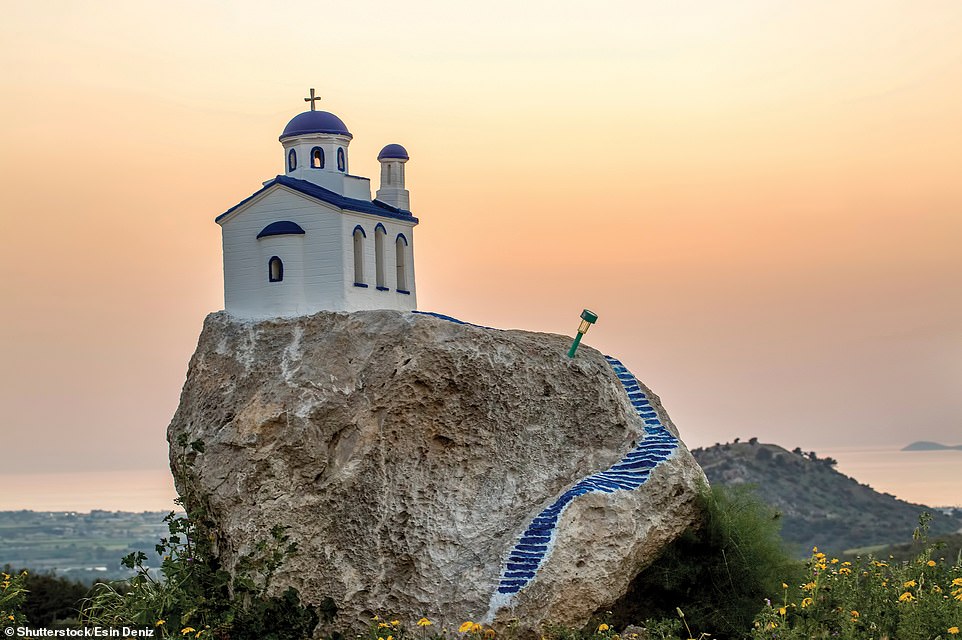 ROADSIDE SHRINES: According to Claudia, roadside shrines, known as proskinitari, are sometimes erected by family members where a loved one has died in a road accident. She explains: ‘They often resemble miniature churches. Sadly, they can be seen by roadsides all over the islands, from Kos (above) and Leros in the south to Thassos in the north’ 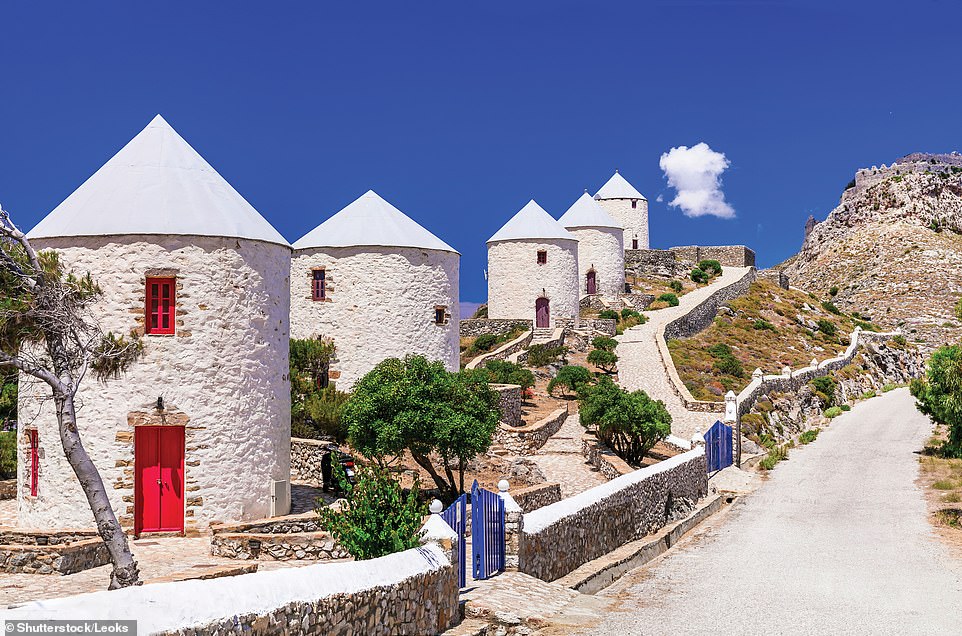 LEROS, DODECANESE: ‘Cylindrical stone windmills, once used for grinding wheat, barley and corn into flour, are a common sight on the wind-whipped Aegean Islands,’ writes Claudia

WINDMILLS, CHORA, MYKONOS: Claudia explains: ‘A landmark in the town of Chora, and a symbol of the Cyclades, five windmills stand on a windy hill overlooking the restaurants and cafés of “Little Venice”. Many windmills were built on Mykonos by the Venetians in the 16th century, but their construction continued until the early 20th century. They were primarily used to mill wheat’ 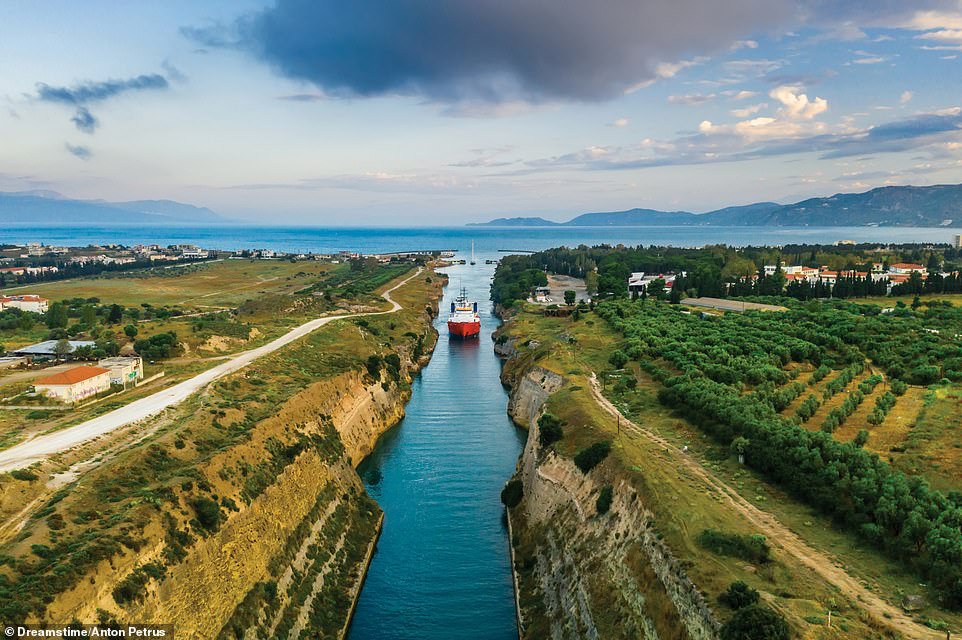 CORINTH CANAL: According to Claudia, the four-mile (6.4km) Corinth Canal effectively turned the Peloponnesian peninsula into an island. She explains: ‘The canal links the Saronic Gulf of the Aegean Sea with the Gulf of Corinth of the Ionian Sea. The idea of a canal was first proposed, but not acted on, by Periander, ruler of Corinth in the 7th century BCE. In the event, construction started in 1881 and, thanks to numerous engineering difficulties, lasted until 1893. Due to the canal’s width of 21.4m (70ft), traffic is limited. Larger ships must be towed through and a one-way system is in operation’ 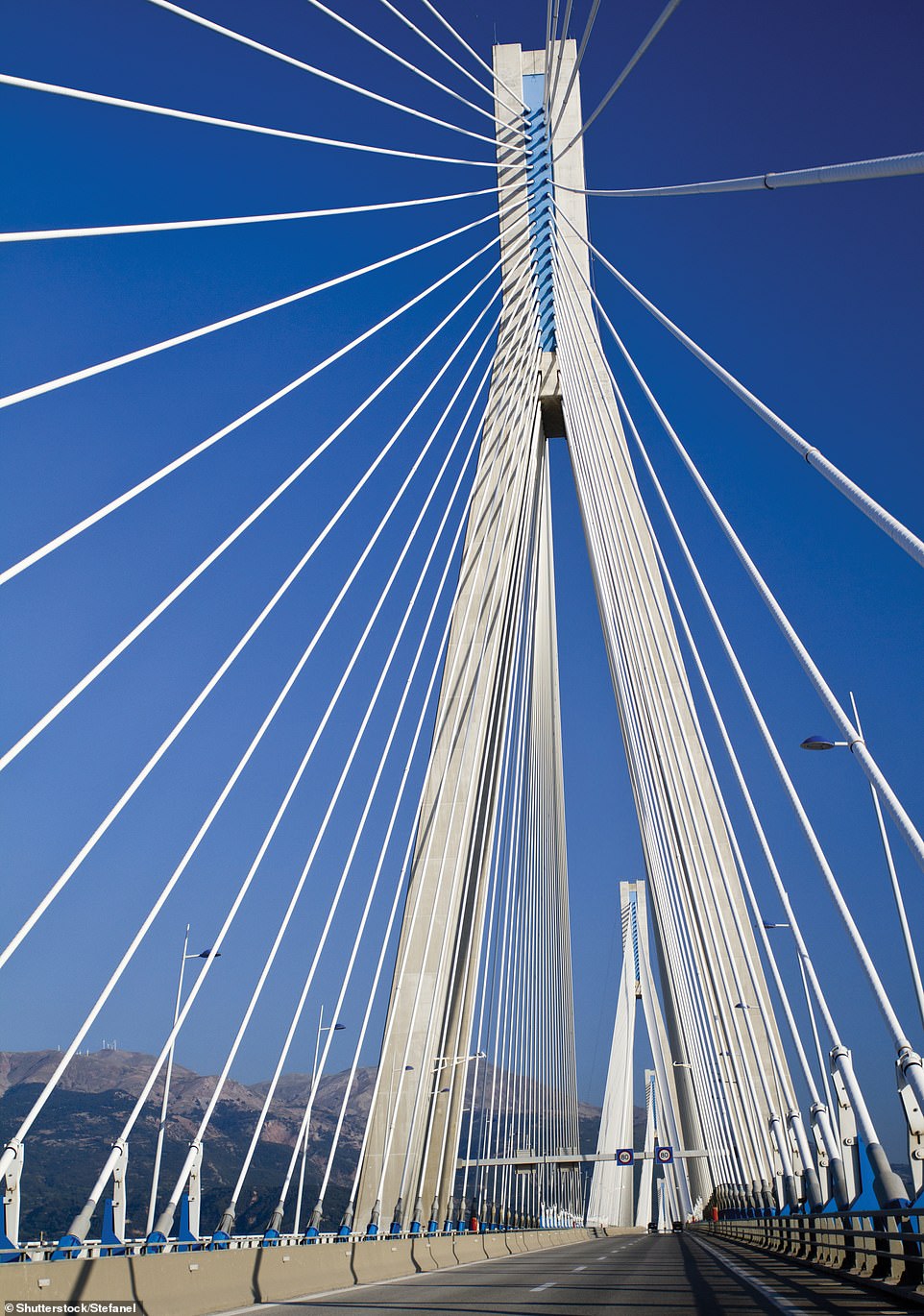 RIO-ANTIRRIO BRIDGE: Completed in 2004, this multi-span cable-stayed bridge crosses the Gulf of Corinth, linking the Peloponnese near Patras with Antirrio on the western mainland, the author says. She explains: ‘Problems that had to be overcome by the bridge’s engineers and architect, Berdj Mikaelian, included deep water over an unstable seabed, the expansion of the Gulf of Corinth due to tectonic activity, and the high possibility of tsunamis. Beside the bridge is Rio Castle, built to protect the Corinthian Gulf by Ottoman Sultan Bayezid II in 1499. At 9,450ft (2,880m) long, with a suspended deck of 7,408ft (2,258m), the bridge has the longest fully suspended cable-stayed deck in the world. A cable-stayed bridge has towers from which cables support the bridge deck, forming a fan-like pattern’ 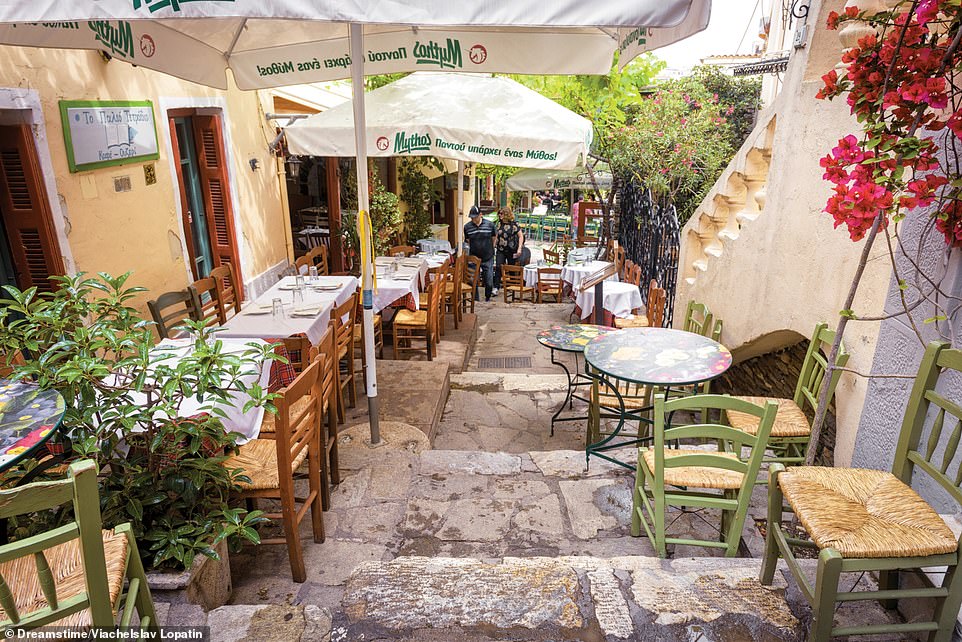 PLAKA, ATHENS: ‘Although most of Plaka is pedestrianised, strollers must beware the occasional speeding bike. The cobblestoned sidestreets become quieter as walkers ascend the slopes, entering the enclave of Anafiotika,’ remarks Claudia 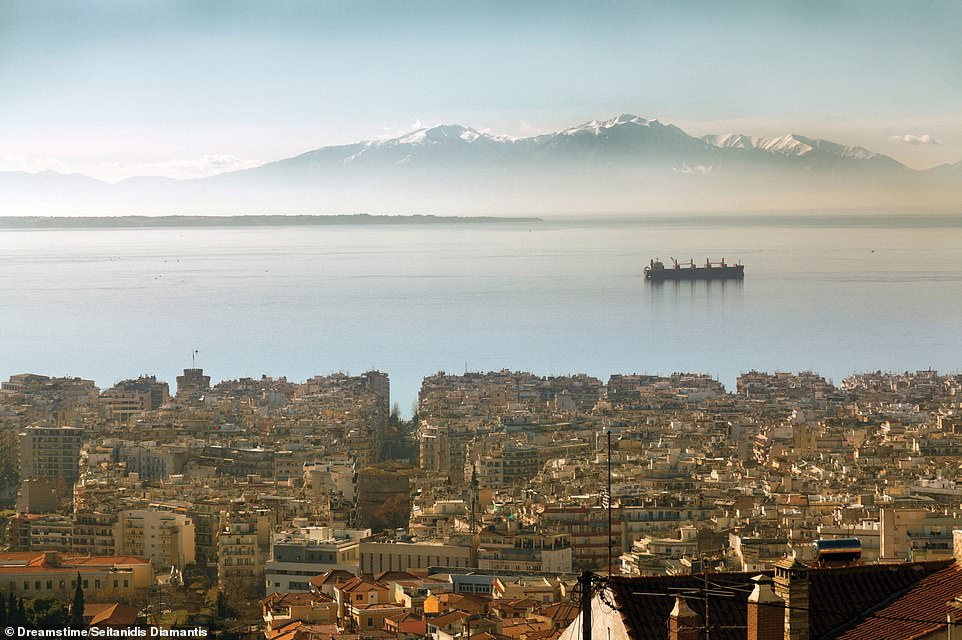 THESSALONIKI AND THE THERMAIC GULF: ‘The Thermaic Gulf, in the northwestern corner of the Aegean Sea, is named after the ancient city of Therma, which stood close to modern Thessaloniki,’ explains Claudia. ‘Therma, founded in the late seventh century BCE, was itself named after the word for fever, thanks to its location in a mosquito-infested swamp’ 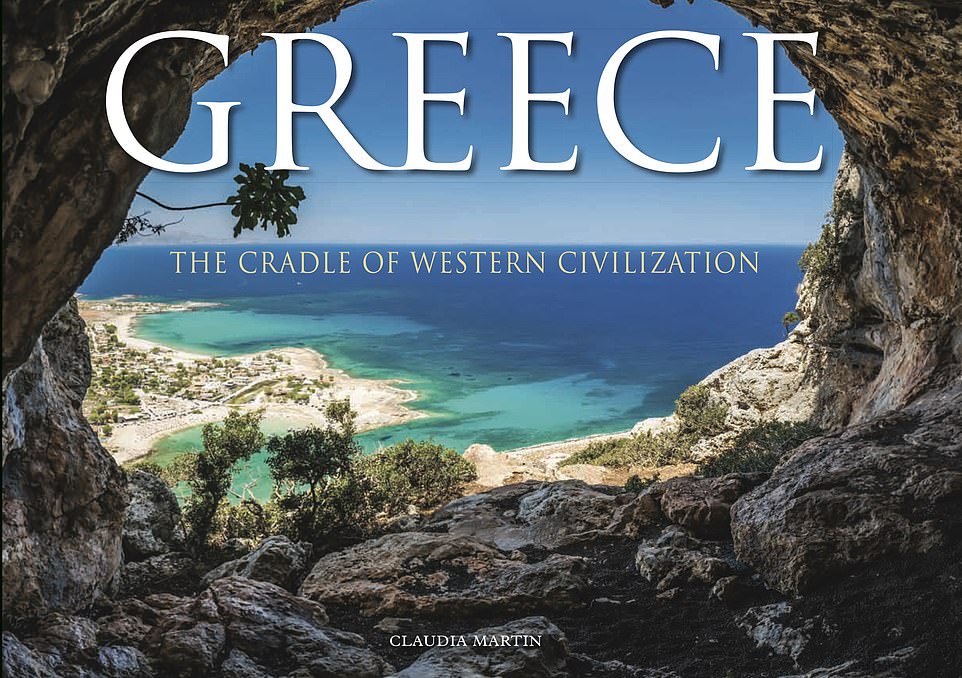 All images taken from the book Greece by Claudia Martin (ISBN 978-1-78274-975-2) published by Amber Books Ltd and available from bookshops and online booksellers (RRP £19.99)

Shadow Play by Peppers, Melbourne has opened its doors ·