Home » Travel » Ryanair slams Which? survey as ‘fake news’ after claims of ‘lengthy’ waits for refunds

Ryanair: There are ‘no refunds for operating flights’ says O’Leary

A recent survey from consumer rights activists Which? has claimed a number of airlines left customers feeling “dissatisfied” when trying to claim refunds amid the coronavirus pandemic. Though airlines around the world were hit with a sudden onslaught of cancellations, it seems some tackled refunds much quicker than others.

According to Which? the two airlines which scored the lowest for customer “satisfaction” were budget-carrier Ryanair and transatlantic operator Virgin Atlantic.

However, both airlines have spoken out against the survey, with Ryanair going so far as to slam it as “fake news”.

Of the Ryanair customers who took part in the survey, 79 percent of respondents said they were “dissatisfied with the customer service they received while trying to get a refund.”

Of those surveyed, only one in six Ryanair passenger said they were “satisfied with their refund offer.”

Despite this, Which? noted some customers were “happy with accepting a voucher or waiting a bit longer to get their refund back.”

According to the survey, 84 percent of Virgin’s customers said they were “dissatisfied”.

Furthermore, only one in six said they were “satisfied” with their refund offer.

With the transatlantic carrier dealing specifically with long-haul journeys, the experts at Which? suggest this could be linked to the cost of tickets. 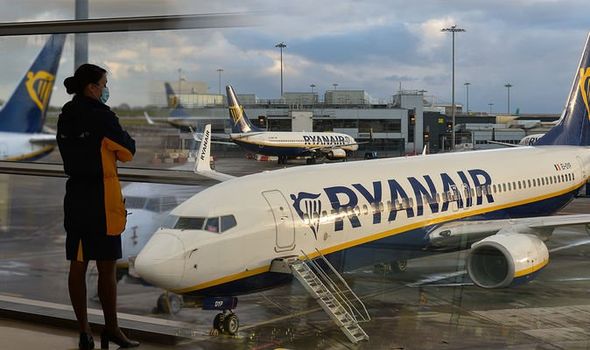 Additionally, a third of respondents who had a flight cancelled by the two airlines told Which? they waited more than three months for their refund.

“None of the Ryanair passengers surveyed received their refund within the legal time frame of seven days after the cancellation,” the survey adds.

However, both airlines have spoken out about the report, pointing out it surveyed just 1,797 consumers.

A Ryanair spokesperson told Express.co.uk: “This is just fake news (and more fake surveys) from Which?, who repeatedly make false claims about Ryanair.”

They said: “Throughout the Covid-19 pandemic our absolute focus has been on supporting all of our customers, whether that’s to amend, rebook or cancel plans.

“This survey by Which? was conducted in September 2020 and offers an out of date portrayal of customer sentiment.

“As planned, we completed the backlog of remaining refunds in November 2020 and returned to processing refunds within a normal timeframe, which we continue to do.

They continued: “We recognise that at the height of the pandemic, the huge volume of refund requests we received, combined with the constraints on our teams and systems, meant that refunds took longer than usual to process, and we sincerely apologise to our customers for this.

“We delivered on our previous timeframe commitments, except for a very small number of administrative issues, related primarily to outstanding bank details that were required from the customer to process the refund.

“Once identified or resolved, the refund was escalated for review and immediate payment.”

easyJet was also named in the survey, with Which? claiming customers scored the airline a ‘satisfaction’ score of 45 percent after customers claimed they faced long waits “on the phone to try and speak to someone about a refund.”

Only 32 percent of easyJet customers surveyed said they were refunded “within 28 days.”

Even fewer, at just four percent, cited receiving their refund “within seven days.”

The orange-tipped carrier has also spoken out, pointing out its added flexibility and new refund processes for customers since the pandemic began.

“easyJet continues to provide customers with more flexibility than ever including the option of a refund even if their flight isn’t cancelled,” an easyJet spokesperson told Express.co.uk.

“We aim to answer all calls as soon as possible but changes to bookings can easily be done through the website.”

Of course, the survey also identified airlines who, despite some bumps along the way, left customers feeling more content with the process.

Eight in 10 passengers told Which? they received their refund within 28 days, with one in three saying they received it within the legal time frame of seven days.

“None reported waiting more than three months,” the survey states.

“While the airline did not always proactively inform customers of their right to a cash refund, instead encouraging them to rebook for another date, customers told us it processed refunds without quibbling when they were requested.”

Jet2 was followed by TUI, which received the second-highest score of 57 percent, and then British Airways with 50 percent.

According to which? TUI transformed its refund process in May, when it introduced its online refund request form and began offering cash refunds as an option.

Meanwhile, half of British Airways customers cited receiving their refund within seven days.

Which? notes this was “better than any other airline in the survey”.

However, some passengers complained about “extremely busy phone lines” after the British flag-carrier removed its online refund request form from its website.

Though some customers were happy, editor of Which? Travel Rory Boland believes more needs to be done to raise satisfaction levels.

“These findings will come as no surprise to the millions of people left chasing their airline for their money back after suffering a flight cancellation last year,” he said.

“Billions of pounds were illegally withheld from customers, and to add insult to injury, these results demonstrate that many of these customers had to also put up with abysmal customer service through the process.

“As the UK approaches the anniversary of the first nationwide lockdown, it’s vital that lessons are learned from the previous handling of refunds and cancellations.

“Airlines cannot be allowed to continue to behave in this way, so the CMA and CAA must be ready to act if any are found to still be breaking the law on refunds.”

The 12 best indoor pools in the world, from Ireland to Chile

Emirates touches down in Mexico City ·