Thistle do nicely: Inside the luxurious hotel on the shores of Scotland’s epic Loch Lomond that hosted Barack Obama – and discovering it gives EVERY guest presidential treatment

As we arrive at the entrance of Cameron House hotel, a man is down on his knees on a patch of grass, proposing to his girlfriend, to the accompaniment of a bekilted bagpipe player.

The spot certainly lends itself to such wanton romance, being by the shores of Loch Lomond, with the fairy-tale 17th-century turreted façade of the hotel as the backdrop.

We watch as the teary girlfriend says yes and a member of staff delivers a brace of Champagnes to the joyous couple. Then we walk inside to discover that opulent Cameron House is an enticing venue not just for ring-bearing boyfriends and their brides-to-be, but for foodies, families, fishermen, football fans (there’s a sports bar), film fanatics (there’s an onsite cinema) and former U.S presidents (Barack Obama stayed in the Cameron Suite at the hotel during Glasgow’s recent Cop26 climate summit). 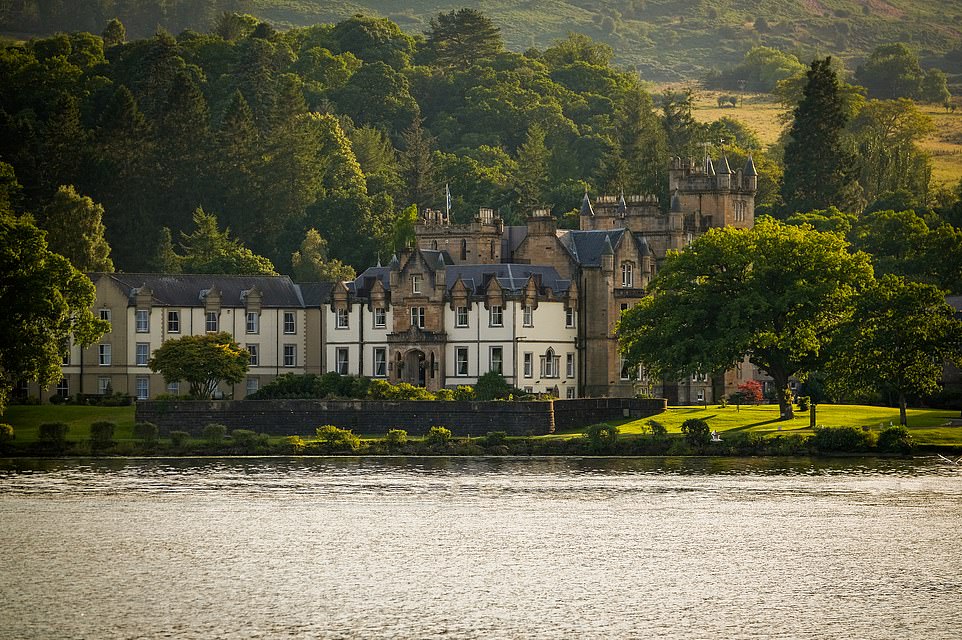 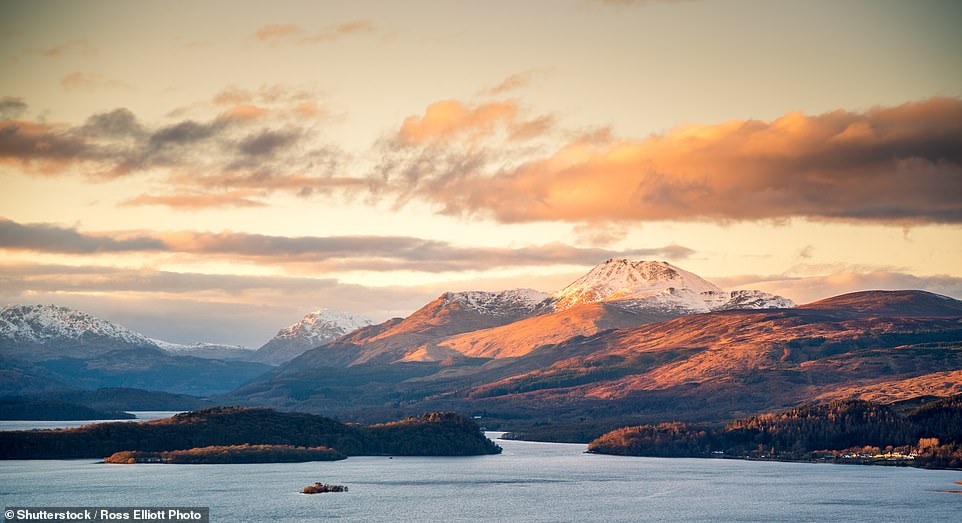 The view from Cameron House, which sits on the shores of Loch Lomond, is towards the mighty Ben Lomond, a mesmerising 3,193ft- (974m) tall ancient volcano (the tallest peak in this image)

What’s more, you’ll get service that’s nigh-on faultless, no matter whether you worked in the Oval Office or the Ovaltine office.

Cameron House, a short drive north from Glasgow, is a vast property with over 600 members of staff, 140 rooms and a huge array of facilities. Still, during our two-night stay, the staff, no matter where we go, are consistently five-star friendly and attentive, seemingly sincerely proud of where they work.

Service in UK hospitality is notoriously hit and miss (see my recent review of Sir Andy Murray’s Cromlix hotel), but this hotel is proof that we are capable of getting it absolutely right. 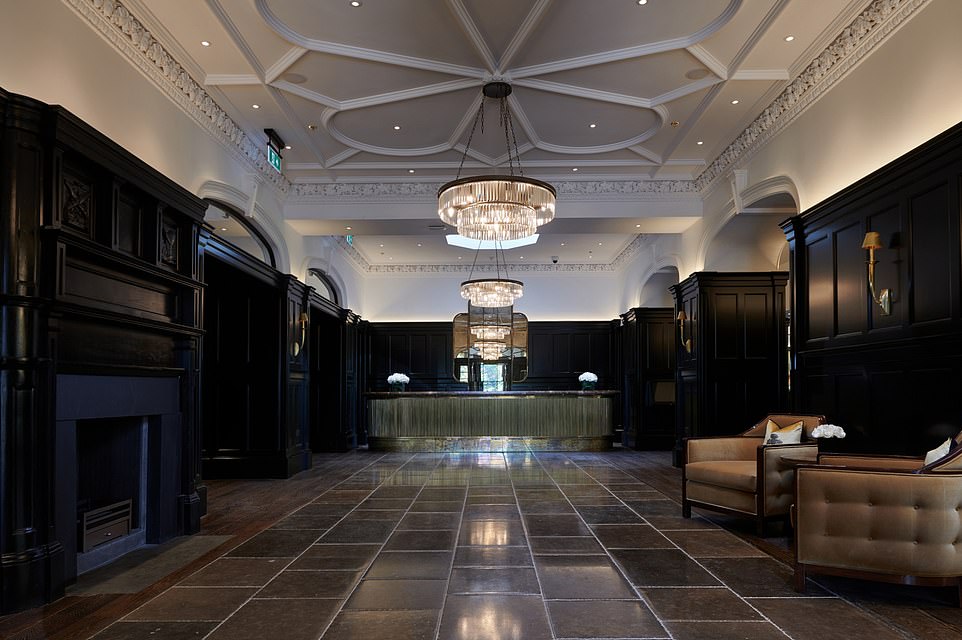 This image shows the reception area at Cameron House, which lies a short drive north from Glasgow 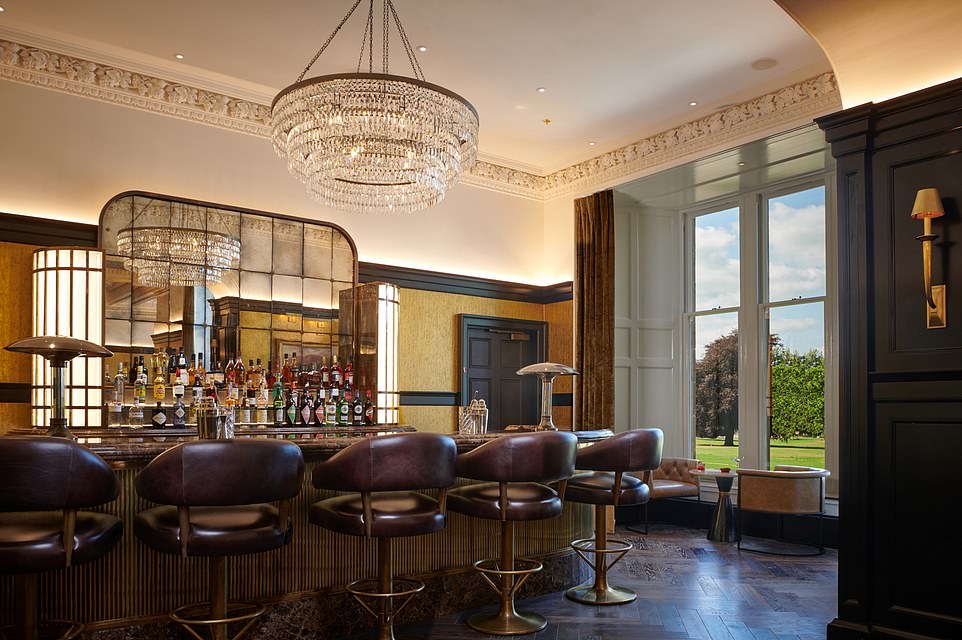 Adjacent to the reception area is the swanky Lobby Bar, where cocktails and afternoon teas can be summoned

Our inviting family bedroom has a room with a children’s bunk bed that delights our four-and-a-half-year-old daughter, a small living room, complete with a vibrantly red sofa and matching armchairs, a master bedroom with a wonderfully luxurious king-sized bed, a posh ensuite bathroom with separate rain shower, twin sinks and a bath (with a shower) and hipster vintage wallpaper throughout.

The downsides? A slight lack of natural light – there are two windows in the living room, but just one other, a small one at the far end of the master bedroom on the rear wall.

And there’s a lack of a loch view. Our windows all face to the rear. What a shame, because Loch Lomond is an absolute humdinger. 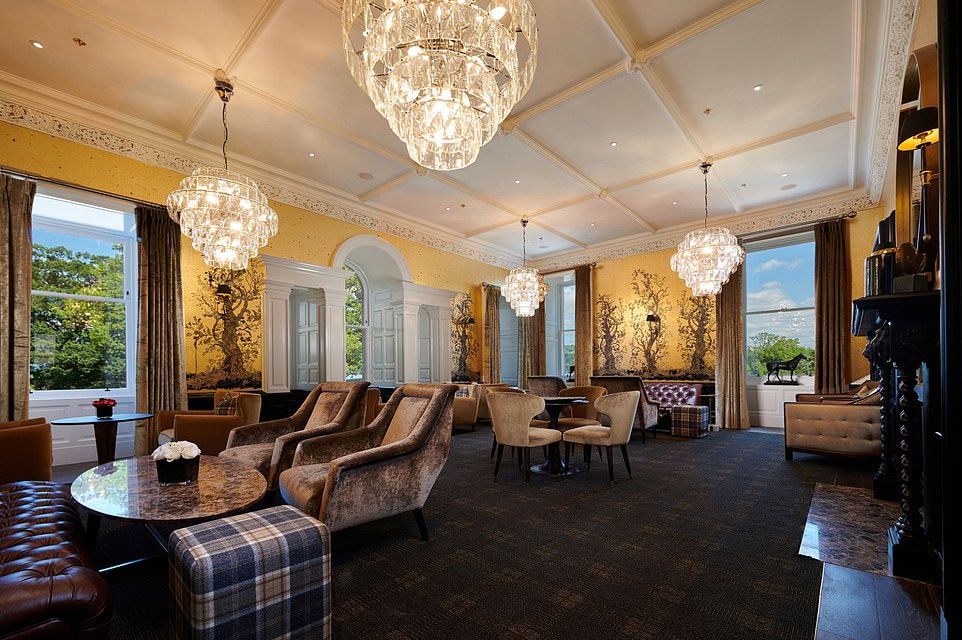 Opulent: The elegant library room, adjacent to the Lobby Bar, is a great spot for reading the paper and nibbling scones 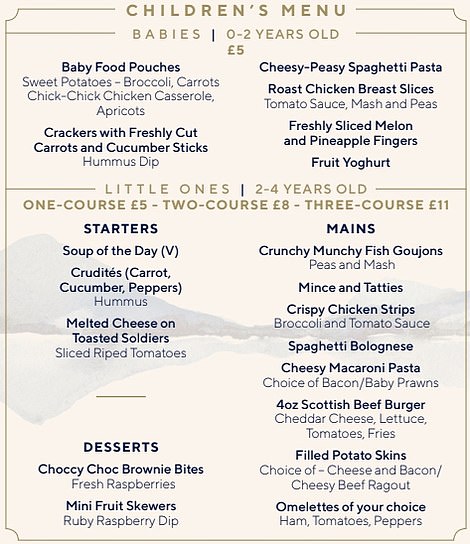 Thoughtful: The Cameron Grill menus for little ones

The 24-mile-long body of water is home to 22 islands and 27 islets, with the piece de resistance view-wise from the hotel being the mighty Ben Lomond, a mesmerising 3,193ft- (974m) tall ancient volcano.

Luckily, one can gaze upon it from several public areas, such as the swanky Cameron Grill, a two-AA-rosette restaurant that offers delicious crowd-pleasers for all ages – there’s a children’s menu, a menu for two-to-four-year-olds and even one for babies (think cheesy-peasy spaghetti pasta and melon and pineapple fingers).

Our £65 three-course evening meal there is superb.

The service fizzes, with the waiter joyfully chatting to our daughter – who’s given a colouring-in book and suitably diminutive cutlery – and the French sommelier expertly guiding us parents through a few choice glasses of wine, including a Condrieu St Cosme white wine from the Rhone in France and a premier cru red wine from Beaune in Burgundy by producer Henri Boillot. 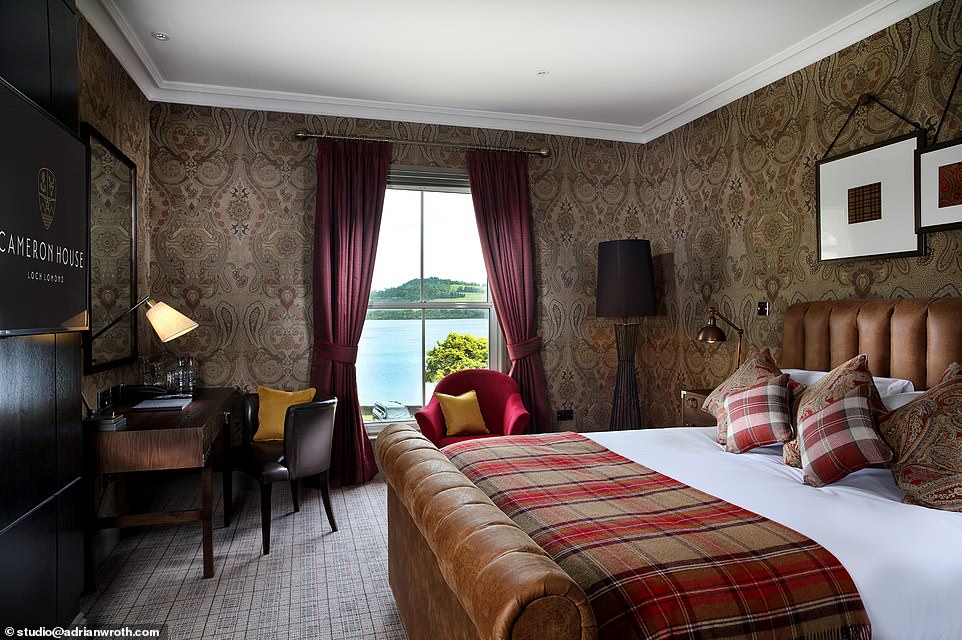 One of the loch-view family rooms at Cameron House, which has 140 bedrooms in total 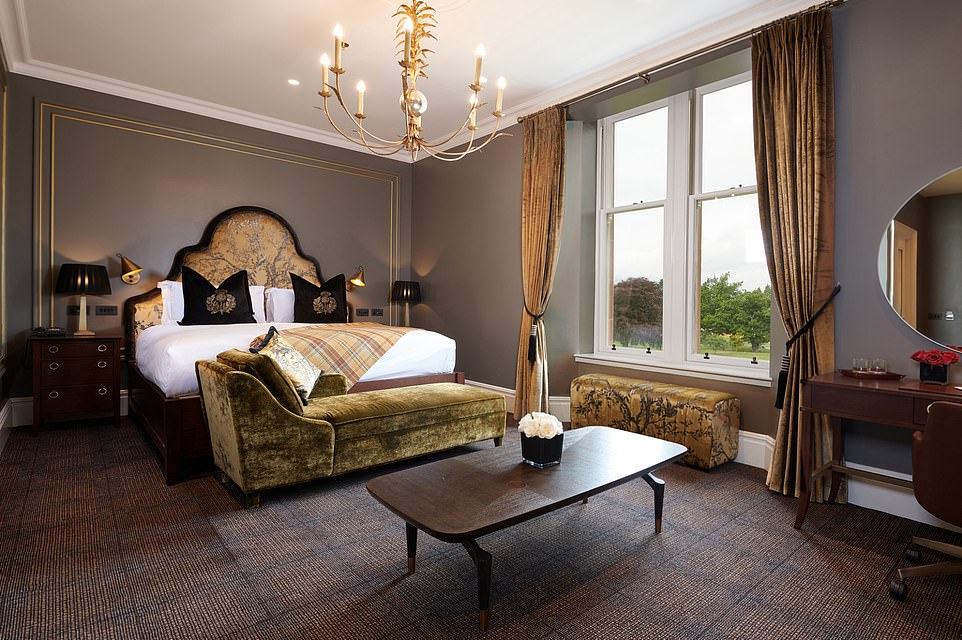 Cameron House is a vast property with over 600 members of staff. Pictured is one of the suites 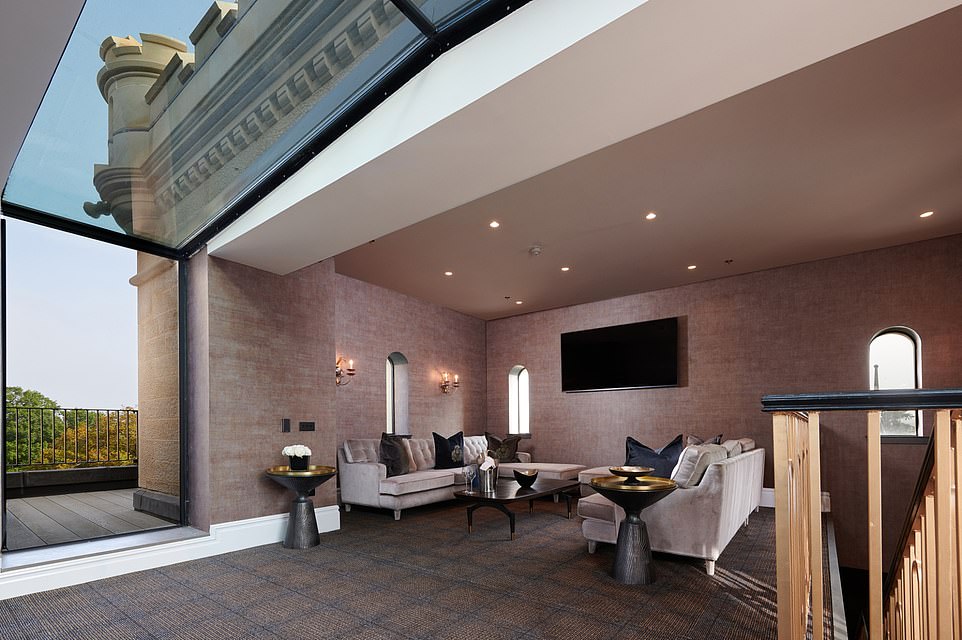 This is the upper level of one of the most palatial slices of accommodation – the Cameron Suite, where Obama stayed 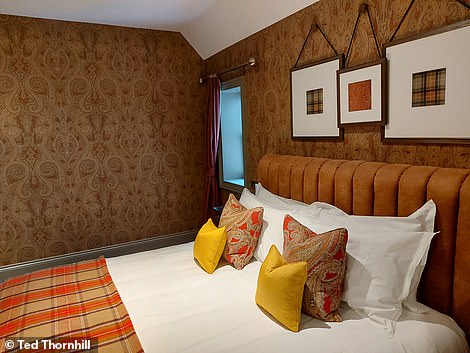 Ted says that the only downside to his room is a ‘slight lack of natural light’ in the master bedroom, pictured – and a lack of a loch view

I start with succulent Isle of Cumbrae oysters nicely embellished with crème fraiche and fennel pollen, enjoy a hearty truffle-and-brioche-stuffed corn-fed chicken breast with spelt and corn and a roast chicken jus, then enjoy a taste-bud-tingling yoghurt and rhubarb mousse and lemongrass sorbet, deftly laid out in strips.

We return each morning to the Cameron Grill for breakfast, which is extensive. There’s a continental buffet on offer, plus made-to-order items including full Scottish, full vegetarian, Eggs Benedict, porridge (of course) and pancakes.

It’s the poached haddock with poached hens eggs that gets my vote, though.

We sample two other dining options at Cameron House – the excellent Boat House (beautifully fresh oysters again), a short stroll away by a marina, and the hotel’s new fine-dining venture, Tamburrini & Wishart, named after the chefs that oversee it – Paul Tamburrini and Martin Wishart, who runs the Michelin-starred ‘Restaurant Martin Wishart’ in Leith. 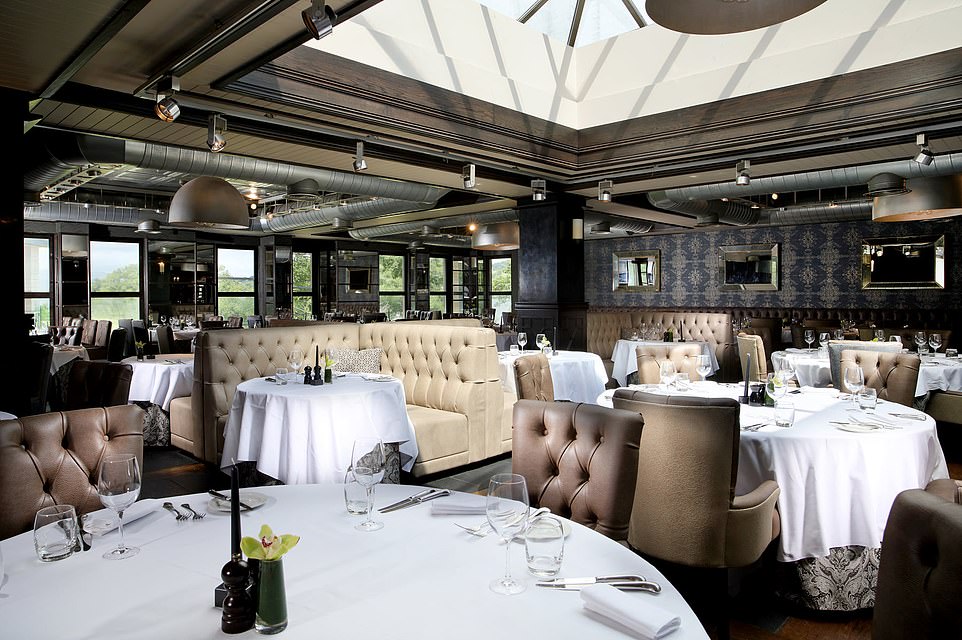 The swanky Cameron Grill, a two-AA-rosette restaurant that offers delicious crowd-pleasers for all ages 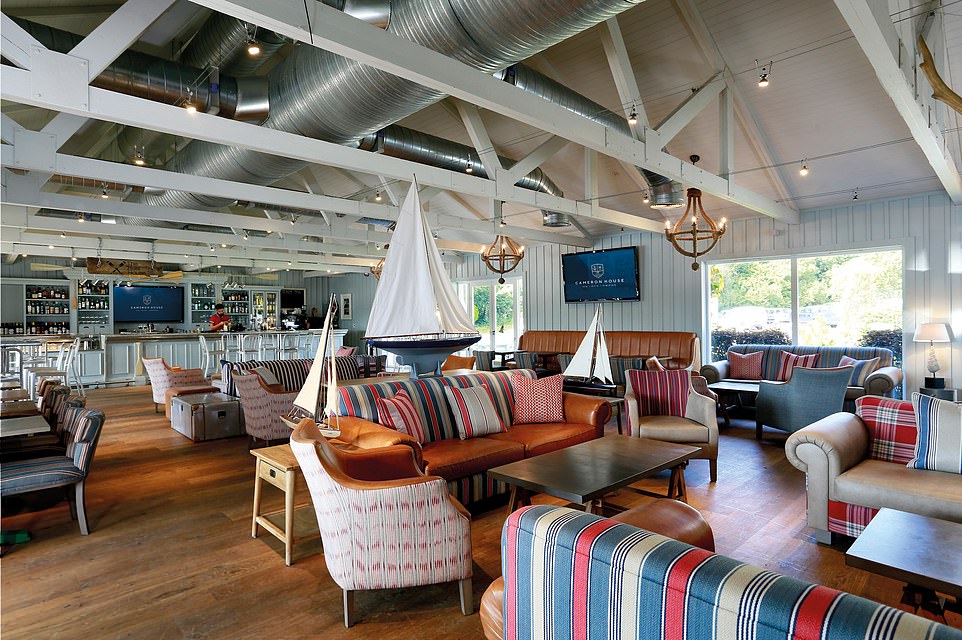 Ted and his family have an ‘excellent’ lunch in the loch-side Boat House restaurant, pictured

Tamburrini & Wishart has just received three highly coveted AA rosettes – and that’s no surprise to me, because here the cooking is artful and highly precise, and the service impressively polished.

We go for the full tasting menu with matching wines (£175 each) and are taken into a gastronomic fantasyland.

The chefs get the ball rolling with a trio of exquisite snacks, including dashi macaroons; Exmoor caviar, potato chips and creme fraiche (£60 supplement), plus bread served with three types of butter – spinach flavour, whipped salted and chicken fat.

Then there’s Orkney sea scallop, roasted in olive oil and finished with a white wine, parsley and oyster sauce.

Next, it’s veal sweetbread that’s been soaked in milk for 12 hours for a creamy texture and cooked in foaming butter; then monkfish loin, cured in sugar and salt brine and served with Oscietra caviar, smoked cockle sauce and celeriac puree. 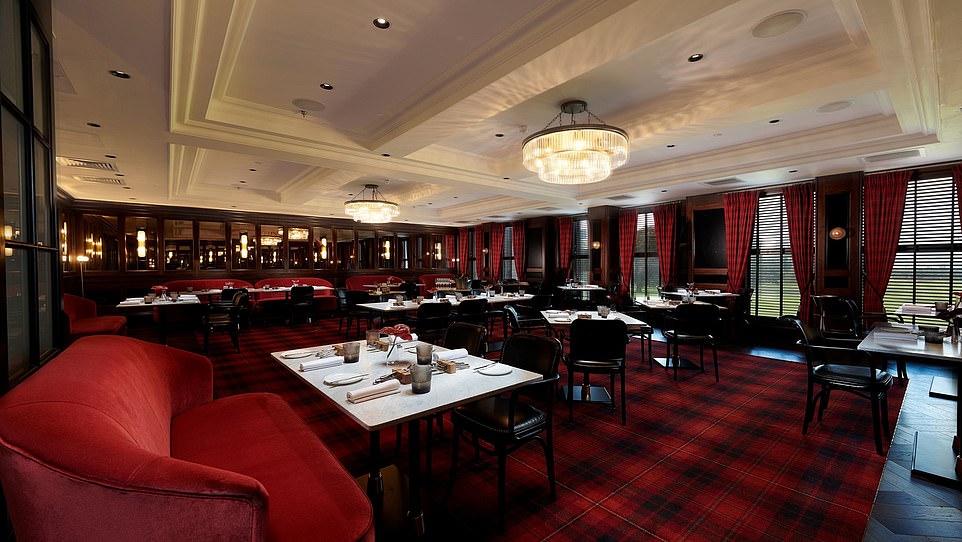 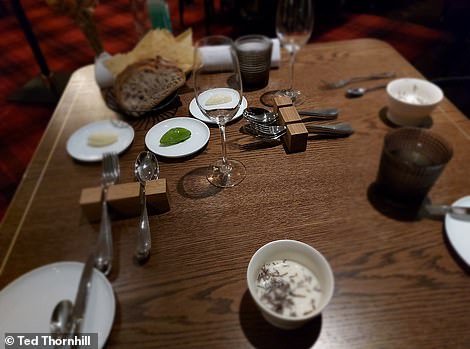 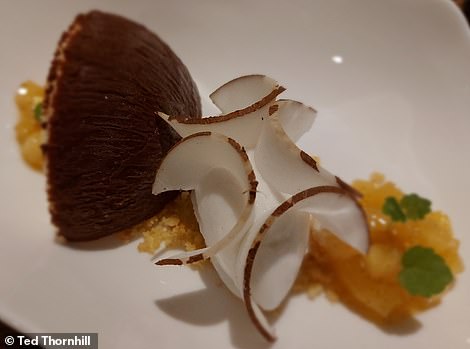 Ted and his partner enjoy full tasting menus with matching wines at Tamburrini & Wishart. The picture on the left shows the set-up at the beginning of the meal. On the right is the artful coconut parfait dessert, with the parfait sculpted to resemble a real coconut

And so is the monkfish loin with Oscietra caviar, smoked cockle sauce and celeriac puree.

Brazilian pastry chef Franciane Tartari (previously of two-Michelin-star Restaurant Andrew Fairlie at Gleneagles) is behind the next two courses – a sublime lemon juice and bay leaf palette cleanser and a very clever coconut parfait, with the parfait sculpted to resemble a real coconut.

And the wines? Matches made in heaven, every time. We especially love the Journey’s End ‘Destination’ Chardonnay from South Africa and the Burgundy pinot noir – a Mercurey Vieilles Vignes by Domaine Tupinier-Bautista.

If you’re a foodie, this is a restaurant worth travelling a distance to experience.

Our daughter’s favourite part of the hotel proves to be, hands-down, the leisure centre, where she has a joyful time splashing around in the family area, which features two tiny slides, shaped as a dolphin and a hippopotamus, and mushroom-shaped fountains.

She’s too scared to go down the (deceptively exhilarating) water slide, but loves watching mum and dad get deposited into the plunge pool at the end when we ride it. 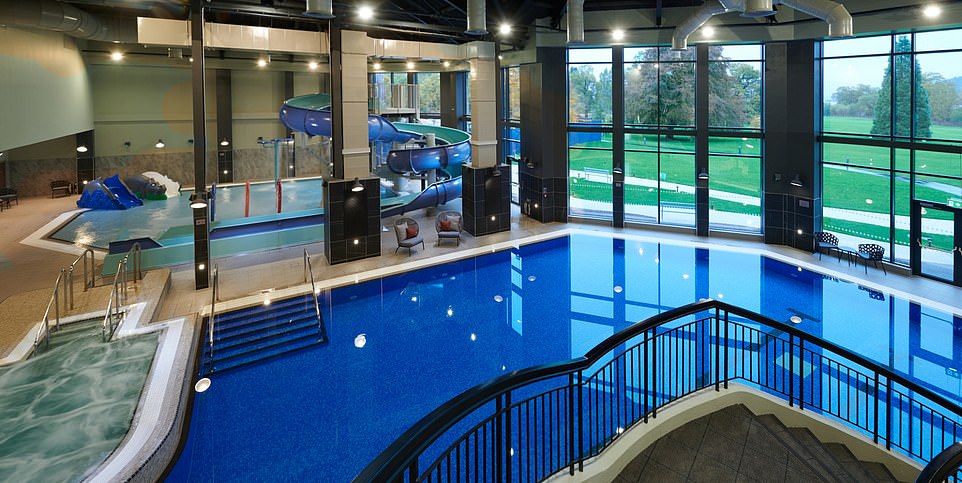 Ted’s daughter has a whale of a time at the Cameron House leisure centre (pictured), which features two tiny slides, shaped as a dolphin and a hippopotamus, mushroom-shaped fountains and a (deceptively exhilarating) water slide 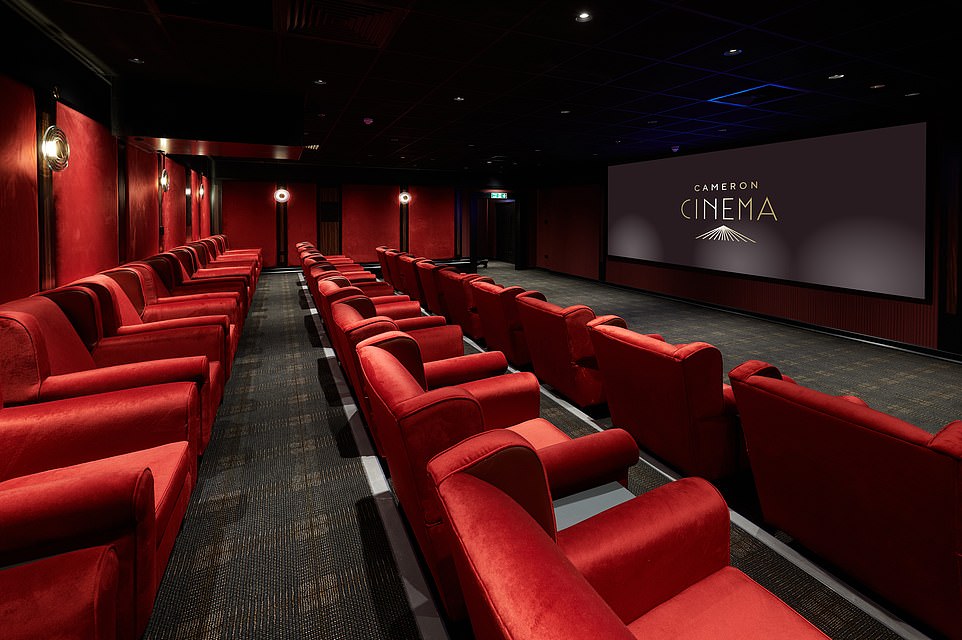 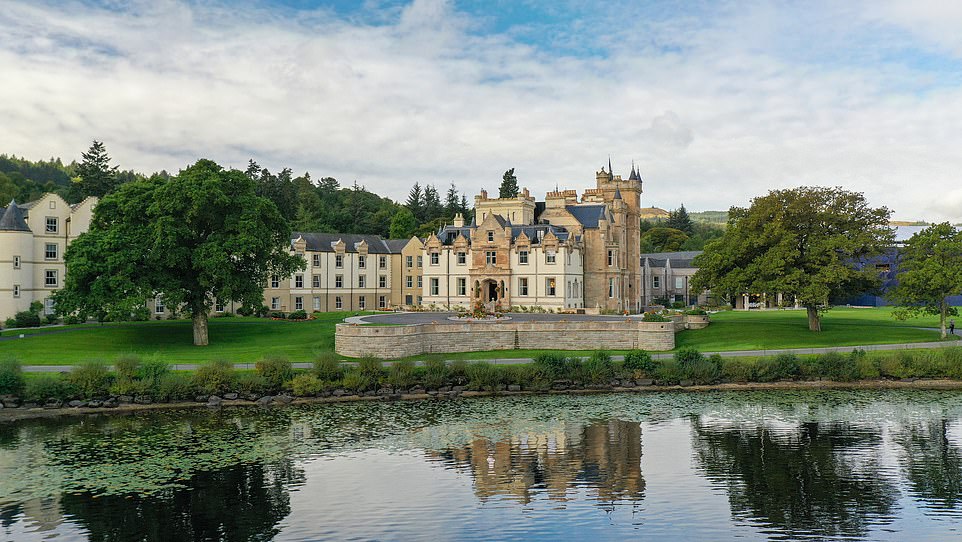 As they arrive, Ted and his entourage witness a man proposing to his girlfriend outside the main entrance of Cameron House (above)

The watery adventuring is scheduled to continue out on the loch, with a ride on the hotel’s motorboat, Celtic Warrior, but gut-wrenchingly, Storm Eunice makes conditions too choppy.

Fortunately, Eunice isn’t so unruly as to prevent a trip to the hotel’s ‘Enchanted Forest’, an adorable ‘fairy village’ in a wood next to the hotel’s spa centre and golf course, which we’re whisked to in a courtesy car.

Our daughter is wide-eyed with wonder.

A screening of Pixar’s Ratatouille in the hotel’s rather luxurious 35-seat cinema, complete with boxes of popcorn, proves to be similarly enthralling.

We leave vowing to return – and I wouldn’t be surprised if the newlyweds are keen to come back too… after all, it’s a great spot for a wedding ceremony.

Ted and his family are hosted at Cameron House, where rooms cost from £295 on a B&B basis. Visit www.cameronhouse.co.uk for more.

Booking.com offers car rental from over 160 countries in the world, with 60,000 pickup locations in the UK. For more information, visit www.booking.com.

Ted uses the superb Blacklane chauffeur service to transport him and his family to Euston station from his south London home. It has a brilliantly user-friendly booking system and operates in more than 200 cities around the world. Visit www.blacklane.com/en.

Jamaica's Half Moon to Rebrand Villas

The Italian National Tourist Board has begun a Solidarity Chain ·