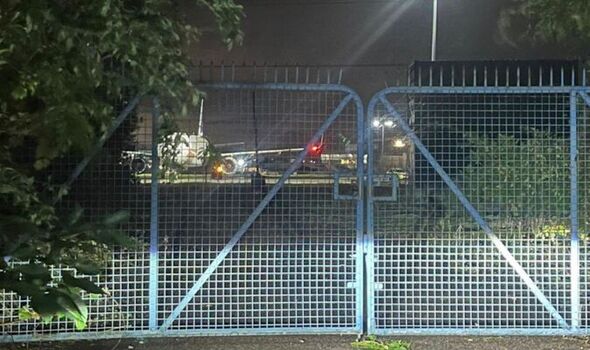 Passengers have told how their Jet2 flight was diverted due to a “security threat”. Following unconfirmed reports of a bomb, the plane, which was travelling from Dalaman, Turkey, for Manchester, was escorted to London Stanstead by two RAF jets last night, October 12.

Passengers claim they “had no idea” what was happening when armed police surrounded the plane after it landed in a “red point” at the airport.

Andrea Aspinwall told the Manchester Evening News that police had their guns pointed at the aircraft as it sat stationary for around two hours.

She said passengers onboard were told to “sit calm” but that “everyone started panicking”.

Andrea, from North Wales, said she sensed that “something was wrong” when the plane began circling in the moments after the pilot announced they would soon be landing at Manchester Airport.

She said: “We thought we were near Manchester but then the plane kept circling.

“The pilot had said we would be landing soon and all the staff were in their seats.”

She said the toilets were then locked, everyone was told to stay in their seats and then the plane landed after turning.

“When we actually landed on this strip with nothing there, we were taken to a ‘red point'”, she said. “The air hostesses couldn’t tell us what was going on.

“We were sat there and then we saw all these armed police driving up. We were terrified. We knew something was wrong then. Police had their guns pointing at the plane.

“Everyone started panicking, I started crying, I’m disabled so I don’t take things good as it is.”

She added: “The pilot came on and said ‘don’t worry we need to sit calm’ but no one could stand up and this was for a good two hours. We didn’t know where we were.

“We saw it on the internet and people saw it on social media. Everyone was saying ‘oh my god’ as it said it was a bomb scare. It was scary, it really was. I don’t get frightened very easily but I was scared. It was the scariest moment of my life.”

Andrea said the pilot was eventually able to leave the cockpit and speak to passengers.

He apologised and said they were told they had to land as soon as possible, she added.

“There was no one showing us where to go”, she said.

“We had to stay downstairs because I was in a wheelchair. They took us up and everyone was screaming and shouting, there were babies. It was awful and I was ignored by Jet2 staff. They didn’t know what to do with us.

“They gave us a voucher to go and get some food, we were told nothing else.

“Then they said they would put on a coach to get to Manchester but I was starting to struggle.

“It was 4.30am in the morning when someone came up to me and we were put in a hotel.”

Martin Ramsay, who also tweeted to say he was onboard the same plane, said he was waiting in the airport for “four hours” to be taken back to Manchester.

He said in a tweet: “@jet2tweets still in Stansted airport 4 hours later and still about 50 people waiting for transfers to manchester or local airport.

“Absolutely terrible service from your company. Should do better. Feel glad to be alive after bomb hoax but this is ridiculous. Not good enough.”

On Facebook, Kui Unisa commented: “False alarm everyone. We are all safe and well. We are either staying in a hotel tonight and getting the flight tomorrow OR taxi/train back to Manchester.”

After the incident, the RAF confirmed that two Quick Reaction Alert Typhoon aircraft out of RAF Coningsby near Horncastle were involved in the response.

The plane was due to land at Manchester Airport at 9.40pm, but landed at Stanstead shortly after 9.20pm.

Jet2 confirmed that the flight had been diverted at the request of UK authorities due to a “potential security concern”. The exact nature of the concern was not specified.

“The plane landed safely and is parked on a remote stand away from the main passenger terminal. The runway was closed for a short time but has now reopened.”

An RAF spokesman said: “The RAF can confirm Quick Reaction Alert Typhoon aircraft were launched this evening from RAF Coningsby to intercept a civilian aircraft that was causing concern. The aircraft was safely escorted to Stansted Airport.”

A spokesperson for Jet2 added: “We can confirm that flight LS922 from Dalaman to Manchester diverted to London Stansted this evening under the direction of the UK authorities.

“The aircraft landed safely and taxied to a remote stand, and customers have now disembarked.

“Our teams are working very hard to look after customers, and we would like to apologise to everyone onboard for any inconvenience or upset caused by this unforeseen incident.

“We understand that the authorities were alerted to a potential security threat, however this has been downgraded and the incident has been declared as over.”

The aircraft was met on the runway by officers from the Essex Police force.

In a statement issued in the early hours of this morning, Essex Police said they established there was no threat on board.

A statement issued on social media read: “We led a safety operation during which a Jet2.com flight from Dalaman to Manchester was diverted to Stansted Airport tonight, Weds 2 Oct.

“Shortly before 9pm, we received a report of a potential threat on board. It was escorted to Stansted, where it landed safely.

“It was parked away from the main passenger terminal.

“The runway was closed for a time while enquiries were carried out.

“Officers were then able to establish there was no threat on board.

“Onward travel was then organised for the passengers and the runway was re-opened.”

A once in a lifetime opportunity ·