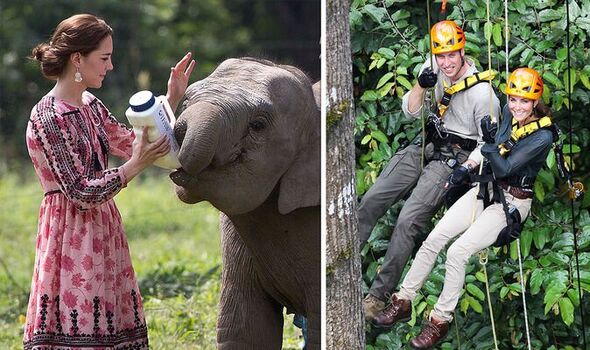 The Duchess of Cambridge took a gap year ahead of university and joined Operation Raleigh travelling across South America.

Author Marcia Moody explained in her book ‘Kate: A Biography’ that during that trip, the royal was forced “out of her comfort zone”.

Moody said of the 2001 Patagonia trip: “[They] tackled river crossings, climbed peaks and pitched their tents at night, learning about their surroundings and survival techniques from the group leaders as they went along.”

While visiting South America, “there was a no-alcohol policy, so there were lots of early nights after an exhausting day of exploring,” according to the author.

The experience could have helped the Duchess of Cambridge prepare for the royal life as during the trip she reportedly proved herself to be a good team leader.

According to the author, she was good at interacting with the local people, and she was “impeccably behaved”.

Kate’s trip to South America was before she met Prince William at the University of St Andrews.

The Duchess spent a total of 10 weeks on an expedition trip to Patagonia, in Chile.

She travelled with a group of people exploring the country, hiking and studying marine life.

Prince William also took a year off before going to university.

He went on a trip to Belize, in the Caribbean, alongside the Welsh Guard.

Prince William also volunteered with the charity Raleigh International in the south of Chile, where he helped to build walkways and teach English in a village.

However, William and Kate missed one another, as he travelled to Chile a few weeks before Kate.

Since Kate joined the Royal Family, her trips have become more glamorous and luxurious.

One of the Duke and Duchess of Cambridge’s favourite holiday destinations is Mustique, in the Caribean.

Mustique is a private island part of the nation of St Vincent and the Grenadines.

The island is known to be a no-fly zone and completely paparazzi free.

The Duke and Duchess of Cambridge reportedly stay at the luxurious Villa Antilles, in Mustique, which cost around £27,000 a week.

At the exclusive hotel, guests have four household staff members, a butler, chef, housekeeper and gardener at their service.

According to the royal biographer, even when they are on holiday, the Duchess likes to “remain active and spend their time horse-riding, playing tennis and practising yoga”.

American Airlines will drop flights to 15 cities in October