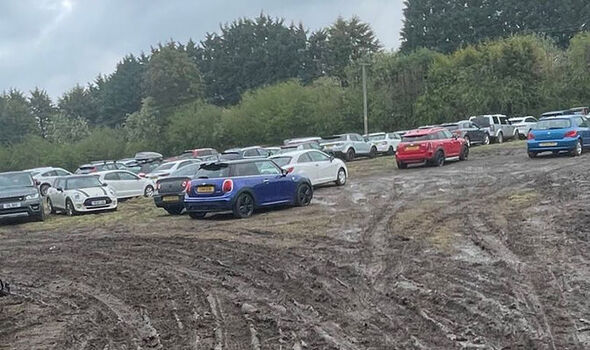 Three tourists who flew out of crisis-hit Manchester Airport and booked the parking through an online comparison site, said they were unable to contact the firm with which they booked and have their cars returned when they landed. All three eventually traced their cars to a boggy field in Styal, Cheshire, just two miles from the airport, but only one has been able to drive theirs away, with two currently blocked in.

Have you been affected by the ‘meet and greet’ parking service? Contact [email protected]

The master keys to all three vehicles, which were handed over on departure are still missing, causing their owners big headaches.

There are believed to be a number of other people affected.

Police say they are aware of issue and they are trying to establish what has happened.

The firms operating the service are not connected to Manchester Airport, a spokesperson confirmed.

Megan Kelly, 20, booked her parking online and was met by a man wearing a hi-vis jacket, who collected the keys to her Vauxhall Corsa and drove it away prior to her flight to Milan last week.

But when the student returned to the UK, the following evening the number she had been given to arrange collection repeatedly went to voicemail, Manchester Evening News reports.

Megan, from Rochdale, Greater Manchester, said: “I was panicking because I thought it might be gone completely.

“It was a massive, muddy field. It wasn’t the sort of place you’d expect or want your car being parked. The police had a list of about 20 registrations they were looking for of people who’d complained.”

After reporting her car stolen, Megan said she also rang the website she booked through and she was given a different number of a different parking firm, who said they had not handled her booking but that they thought they may know where he car was.

She went to the address she was given, in Styal, with her spare key on Tuesday night but due to how dark it was, decided to return this morning. When she got there, the police were already on site. However she was told she was unable to drive it away as it was blocked in by other cars.

“They said they would contact me when they had more information and when I was able to come and collect it,” Megan continued.

“I’m obviously relieved we found it and that it’s there. But I think the police are being pretty unhelpful. I just want it out.

“I’ve no idea how long it’s going to go on for. I won’t be able to drive back to university and I’ll be relying on lifts and public transport for now which is really frustrating. Someone also has my key which is pretty worrying.”

Another motorist, who did not want to be named, whose car is also trapped in a row of other vehicles, said he has been told by police they believe the issue may have arisen from a dispute between the parking firm and the landowner.

The 42 year-old from Cheshire, also said officers have advised him currently the issue is more a civil matter than a criminal one as the keys were handed over voluntarily.

He also reported his car stolen after spending more than three hours trying to locate his car after he returned to Manchester Airport after a holiday in Turkey yesterday. After eventually being given a postcode for this site on Moss Lane, he returned with his spare key, but found his family car “boxed in” by a number of other tightly parked cars.

He is today returning to the site with the AA to see if they can help him lift it out.

The driver said: “There must be three or four hundred cars there.

“It beggars belief that someone can advertise a business like this, take people’s car keys, park the cars, then just vanish. And the police tell you there’s not much they can do.

“I’m very, very angry. These people have my address, my car keys and yet I feel like I have no protection.”

Jacob Williamson, 30, from Wakefield, West Yorkshire, booked meet and greet parking online and he and his partner handed over the keys to her Vauxhall Adam at the airport terminal on Sunday before a break in Brussels together.

However when they landed back today they were unable to contact the number they had been given for collection. When he was informed of the possible location he had his partner’s father drive the 30 miles from West Yorkshire with the spare key.

When he arrived he said the gates to the field were locked. He says he managed to tailgate someone onto the site, and locate his car which was parked on the end of a row. He was forced to wait around half an hour before being able to tailgate someone off the site and drive away.

“I’m just relieved we managed to get ours but it was hard work. And there’s lots of other people who obviously haven’t been so lucky,” he said.

“I just don’t think the police are treating it as seriously as they could. They said they believed it was a dispute between the landowner and the company and said it’s more of a civil matter. But if your car is locked in a field and you can’t (get it) that’s a pretty big deal for people and it needs sorting out quickly.

“Something dodgy is definitely going on. But I just don’t really understand what the end game is for the people who are doing this either. All they are doing is causing people huge headaches and disruption which isn’t what you want or need when you’ve just got back from holiday.”

A spokesperson for Cheshire Police said: “We are aware of an ongoing issue involving a meet and greet service that has failed to return a number of vehicles to their owners.

“The vehicles have been located on a car park in Cheshire but the owners are currently unable to access them. Officers are currently establishing exactly what has taken place and anyone who believes that they have been impacted by the incident is asked to contact Cheshire Police on 101 quoting IML 1244217.”

A spokesperson for Manchester Airport said: “We are disappointed to hear that certain unscrupulous third-party parking operators are misleading customers in this way. These providers are in no way connected to Manchester Airport and we would always recommend customers do their research into a company before handing their keys over.

“As well as Manchester Airport’s own parking products, there are a number of reputable providers in the area and we encourage customers to use initiatives such as Park Mark and the government-backed Buy with Confidence scheme to find one that has undergone a series of detailed checks and is committed to trading fairly.

“We will continue to support the police and our neighbouring councils’ trading standards teams in doing all we can to raise awareness and tackle this issue.”