All set for America! Holidays to the U.S. are back — and there’s something for everyone. Take your pick from these top trips across the pond

President Biden’s announcement that fully vaccinated Brits can start visiting the States again from November is likely to lead to a tourist stampede across the pond this winter.

In the last ‘normal’ year of travel, 4.8 million Britons visited America, making it our fourth most popular destination after Spain, France and Italy.

Yet since March 2020, when Donald Trump imposed a travel ban, it has been impossible for tourists to go if they had been in Britain at any time within two weeks of arrival. Here we round up 14 great American getaways across the vast nation. 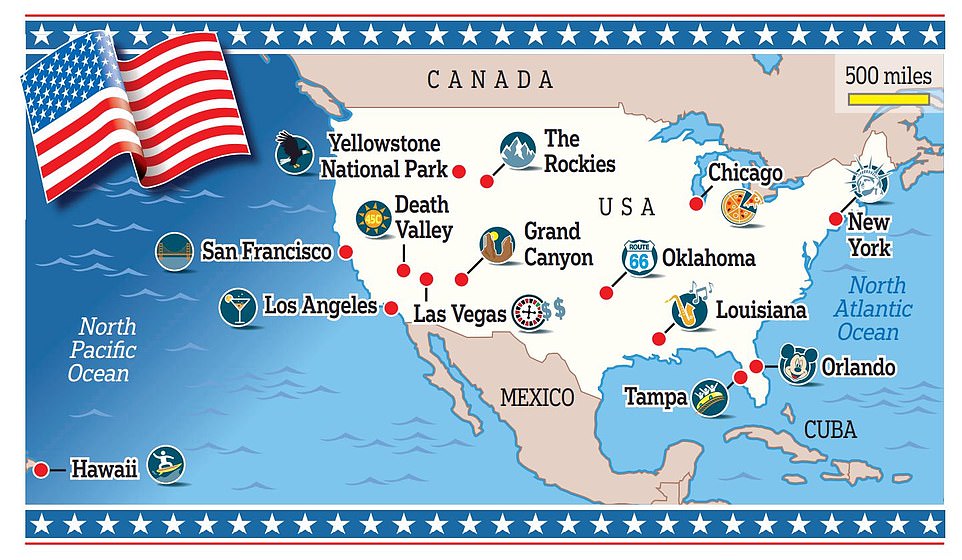 If you have been missing the buzz of the Big Apple, don’t waste any time. Tour operators have already put together packages for November.

Early winter is a lovely time to go, with golden colours in the trees of Central Park. It’s also perfect for stocking up on Christmas gifts as well as to watch basketball (New York Knicks), ice hockey (Rangers) or American football (Giants). 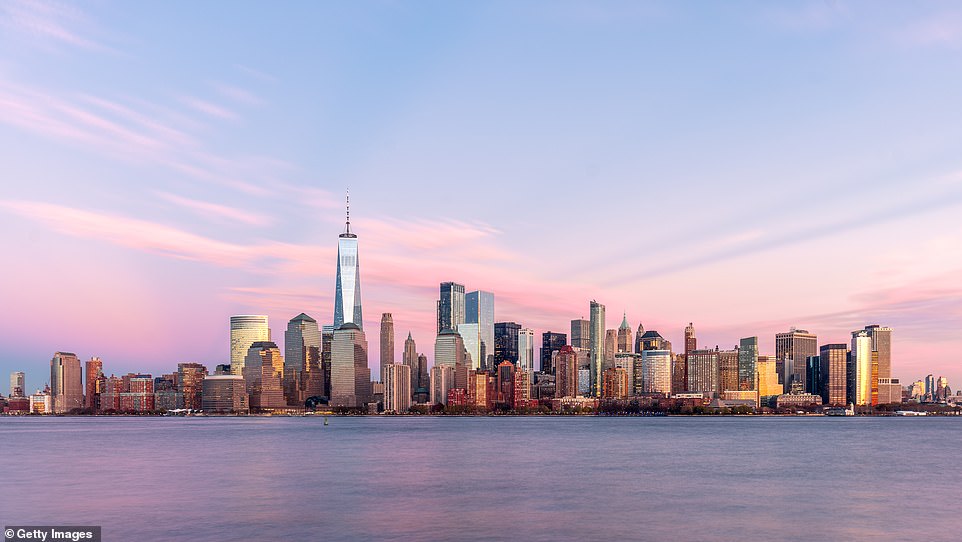 If you have been missing the buzz of New York City (pictured), early winter is a lovely time to visit

Best time to go: Beware, it can be bitterly cold during January and February, with average daily low temperatures below zero. The spring and autumn months are best with temperatures pleasant but not too hot.

How to do it: Four nights at The New Yorker, A Wyndham Hotel from £639 pp with Heathrow flights on November 2; must book by October 15 (travelbag.co.uk).

Spot bald eagles, America’s national bird, as well as coyote, bison, moose, wolves and elk on a visit to Yellowstone National Park — which celebrates its 150th anniversary next year. Join a seven-day bespoke wildlife tour that includes a visit to the National Elk Refuge and a chance to track wolves in the remote Lamar Valley.

Best time to go: April-May and September-October when there are fewer crowds.

How to do it: Week-long trips from £5,995 pp including flights, guides, transfers and all meals (wildlifeworldwide.com).

Listen to jazz and blues in the lively French Quarter of New Orleans after enjoying a fortnight-long fly-drive around Louisiana. Pass through swamplands and remote small towns, while following the Mississippi to get a taste for life in the Deep South. Make sure you try ‘gumbo’: a delicious stew with Creole spices, shellfish, chicken and sausage.

Best time to go: During New Orleans Mardi Gras, which runs over two weeks to March 1.

How to do it: A fortnight’s fly-drive with B&Bs from £2,395pp with international flights (bon-voyage.co.uk). 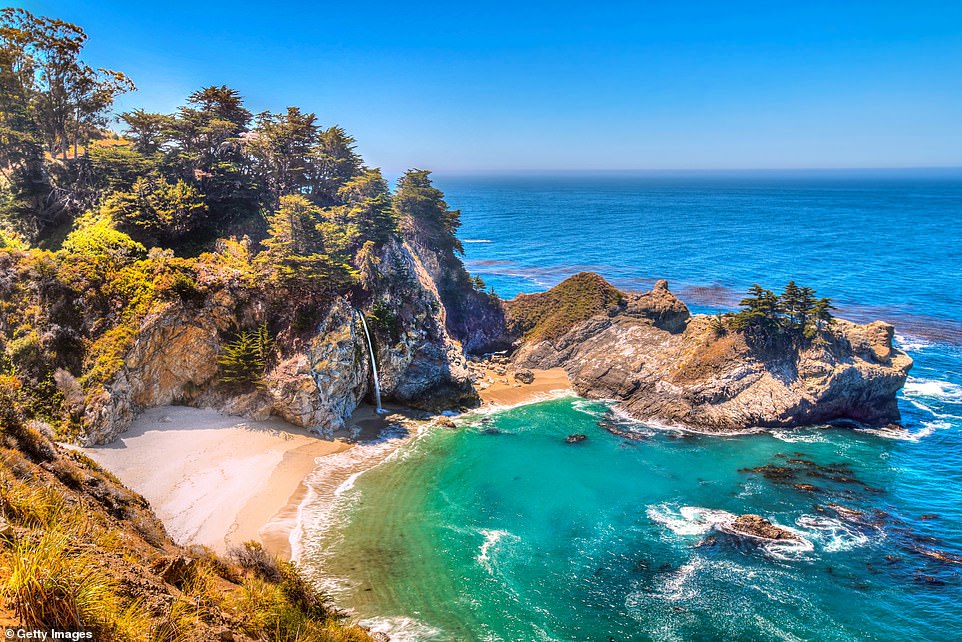 On a road trip along the coast in California, head past the beaches of the Big Sur (pictured) on the way to Los Angeles

Hit the highways on a classic road trip along the coast in California, beginning in San Francisco and finishing in Los Angeles. This is a wonderful way to take in two of America’s most vibrant cities. Enjoy the Golden Gate Bridge in San Francisco and take a ferry for a tour to visit the notorious former prison island of Alcatraz before heading south via Monterey and the beaches of the Big Sur to LA. Catch a flick at the Chinese Theatre on Hollywood Boulevard and see the stars’ names on the Walk of Fame before flying home.

Best time to go: In summer for the best weather — temperatures in the mid-20s (centigrade).

How to do it: Seven-night fly-drives from £1,599 pp including hotels, flights and a San Francisco Bay cruise (flightcentre.co.uk).

Travel by the new ‘Rockies to the Red Rocks’ train from Denver in Colorado to Moab in Utah then embark on a road trip exploring the epic scenery in America’s West. Highlights include the spectacular Cascade Canyon in the Grand Teton National Park, Wyoming, as well as going white-water rafting along the River Arkansas in Colorado.

Best time to go: During the summer for warmer temperatures in the mountains.

How to do it: 14-day trips from £2,930 pp including flights in and out of Denver, car-hire and hotels (originaltravel.co.uk). 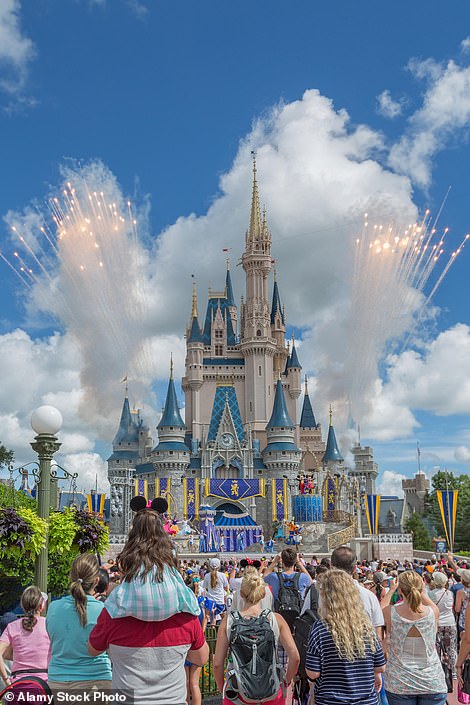 The last week of August is often the best time to visit the Walt Disney World resort (pictured), as it’s quieter

What better way of seeing the theme parks in Orlando, Florida, than basing yourself at Walt Disney World resort itself? Stay at Disney’s fun All-Star Music Resort, which has pools shaped like guitars and pianos, plus rooms themed around country music, calypso, rock’n’roll, jazz and Broadway musicals.

Best time to go: For families after a summer holiday, the last week of August is often best as U.S. schools return in mid-August and it’s quieter.

How to do it: A week at Disney’s All-Star Music Resort from £866 pp in January including Heathrow flights (tui.co.uk).

Explore America’s great desert parks on a ten-day tour that begins in Las Vegas and takes you through the arid badlands of Red Rock Canyon to Death Valley, Palm Springs, and Joshua Tree National Park. From there, the coach on this group tour continues east to the eerily beautiful Sonoran Desert and on to Kartchner Caverns State Park in Arizona.

Best time to go: Depends on how hot you want to be — perhaps avoid June to September when it is really scorching (more than 45c).

How to do it: Ten-day tours from £2,725 pp including hotels, 15 meals, transfers and flights (trafalgar.com).

BACK TO SIN CITY

In 2019 more than 40 million tourists flocked to Las Vegas — nicknamed Sin City for its love of gambling and being a place where people let their hair down (often after a few drinks).

Now that the U.S. is back for British holidaymakers, expect the parties to start up again. For a fun base, how about booking a room at the extraordinary Luxor hotel, shaped like an Egyptian pyramid — complete with a casino on the ground floor?

How to do it: Seven nights at the Luxor hotel from £649 pp in November including Heathrow flights; must book by September 28 (britishairways.com/lasvegas). 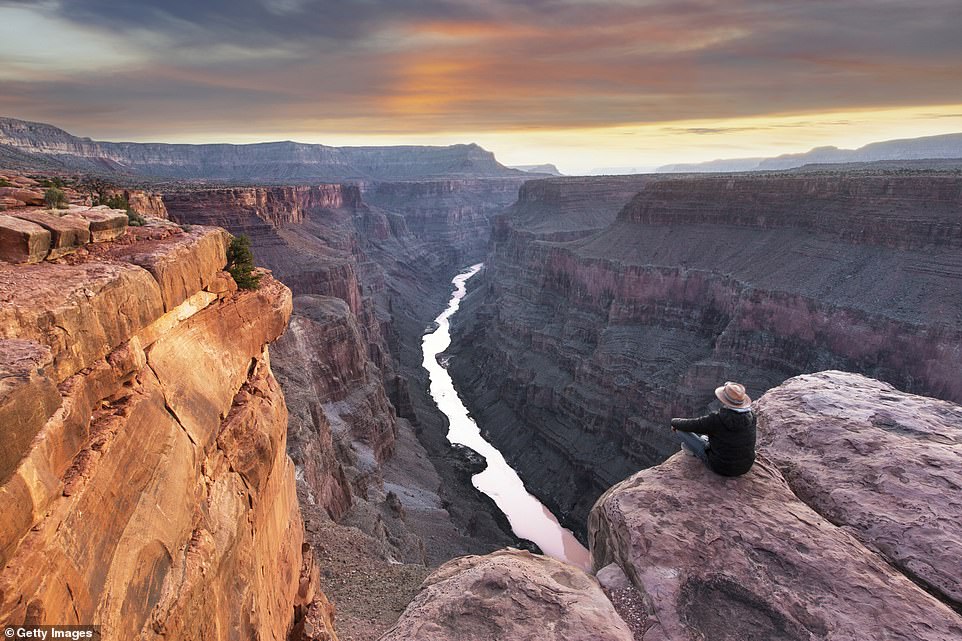 Take in incredible views of the Grand Canyon in Arizona, pictured, on a guided tour of the American West

See the best of the West on a 16-day guided escorted tour taking in Hollywood in Los Angeles, San Diego, San Francisco, the Grand Canyon in Arizona and Yosemite National Park in California’s Sierra Nevada mountains. You travel in a group by coach.

Best time to go: February and March are good, when sights are less crowded and prices are lowest.

How to do it: 16-day California and Golden West tours from £2,999 pp in March including Heathrow flights (titantravel.co.uk). 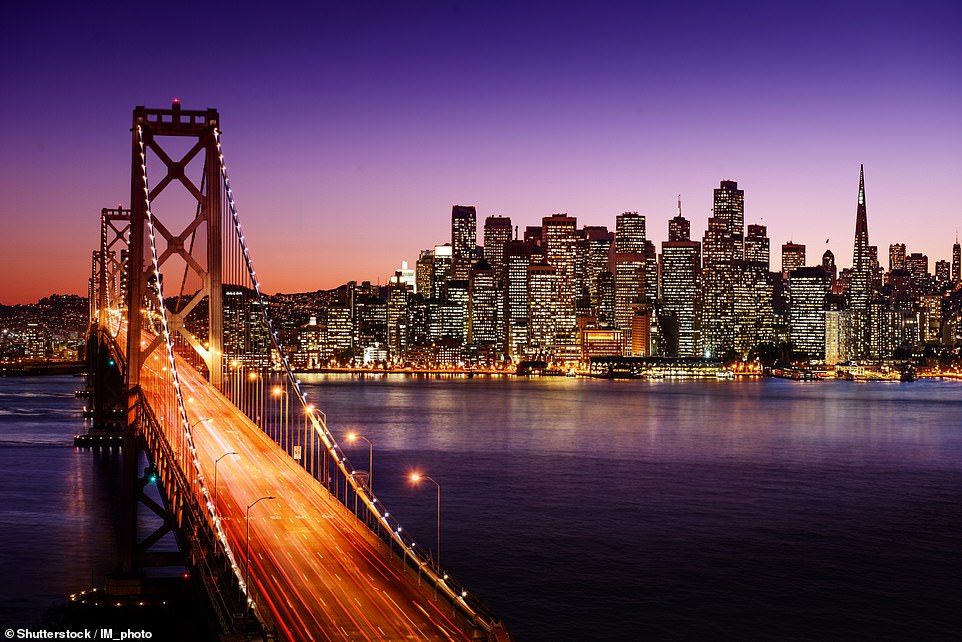 On a tour of American big cities, head to San Francisco (pictured) to visit its lively pubs serving craft beer

How about getting a fix of American big cities by seeing New York City, Los Angeles and San Francisco on an action-packed nine-night tour. Enjoy a cocktail or two in Manhattan before flying to Los Angeles and perhaps going out for a night of live music at the Viper Room on the Sunset Strip — then heading to San Francisco to visit its lively pubs serving craft beer. It’s quite a trip…

Best time to go: In the spring when it’s warmer but not too busy, or in the autumn.

How to do it: Nine-night trips including hotels and all flights from £1,129pp; trips can be extended (americansky.co.uk).

Drive 2,448 miles along the original Route 66 from Chicago to Los Angeles and wallow in U.S. kitsch and nostalgia for the early days of motoring in America — riding in a convertible between Las Vegas and LA so you can arrive in style on the west coast.

Best time to go: Avoid winter and the heat of the summer, when the route is busiest. 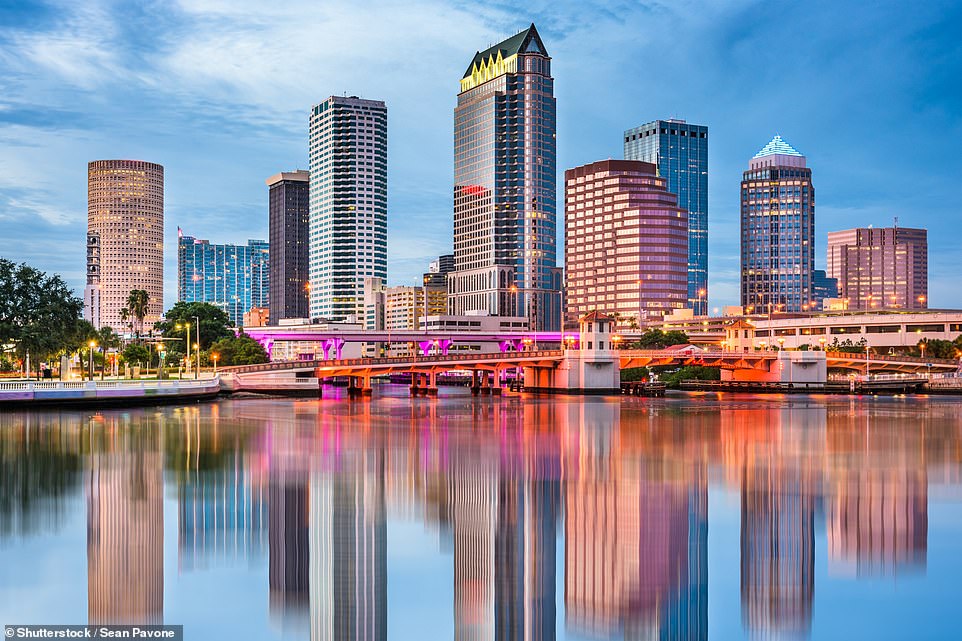 Tampa, along Florida’s Gulf Coast, enjoys temperatures of up to 21c in January. Pictured is the city’s downtown skyline

Fully vaccinated British holidaymakers will be able to enter the U.S. from ‘early November’.

It is understood that all British vaccines will be accepted, with proof in the form of the NHS Covid Pass. You must also take a Covid test with a negative result within three days of departure. You will have to provide border officials with contact information so you can be traced. It is thought children not eligible for the vaccine will be exempt from requirement to show proof of vaccination.

Most states have dropped Covid restrictions, but some local areas are reinstating face mask rules.

Relax for three days at a hotel overlooking the calm waters of Florida’s Gulf Coast, with golden sunsets across the water, while venturing out to take a ride on the tallest roller coaster in Florida at Busch Gardens and trying out the independent bars and restaurants along the Tampa Riverwalk (visittampabay.com). Then join a four-night Carnival Paradise Cruise that includes a stop in Cozumel in Mexico before returning to Tampa.

How to do it: 7 nights from £859 pp with flights in January and full-board on the cruise (ocean-florida.co.uk).

Chicago is often overlooked in favour of New York, yet it’s a wonderful city with jazz and blues bars, comedy clubs, brilliant restaurants, fine skyscraper architecture and walks along Lake Michigan’s shore. Stay at the new Nobu Hotel Chicago in the heart of the action and have fun exploring.

How to do it: Four-night stays at Nobu Hotel Chicago from £843 pp with Heathrow flights (ba.com/chicago, chicago.nobuhotels.com).

Visit a pineapple farm and a coffee plantation, try snorkelling and enjoy a boat trip out on the Pacific Ocean on a ten-day escorted tour of Hawaii with stays on Oahu, Maui and Big Island.

Best time to go: It is warm all year round but driest from April to August.

How to do it: Ten days from £5,401 pp on January 15 with hotels, 11 meals, excursions, flights, guides and transfers (insightvacations.com).

For more ideas go to visitusa.org.uk.