Google Maps Street View allows users to get an on-the-ground look at destinations around the world. While this is often thanks to Google’s specialist cars driving around city streets with a 3D camera attached to the roof, some more far-flung locations are also viewable thanks to pedestrian held cameras.

However, as one Google Maps Street View photographer found, some rather unexpected things can make their way into view which might be hard to outrun.

In the holiday resort of Tulum, Mexico, one saucy couple decided to play somewhat of a prank on the Google camera after spotting it while walking along a beach.

The man and woman are initially dressed in swimwear, perfect for a day sunbathing and splashing in the sea.

They soon have a chance of ensemble, though, once they spot the Google camera. 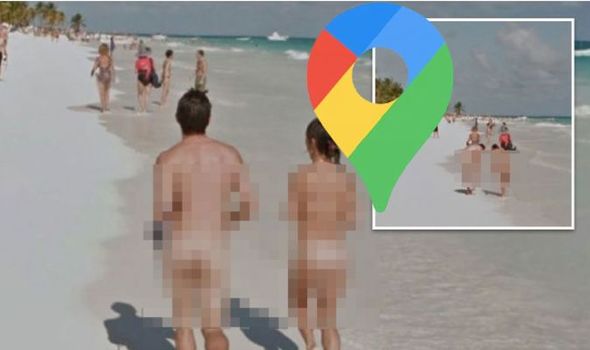 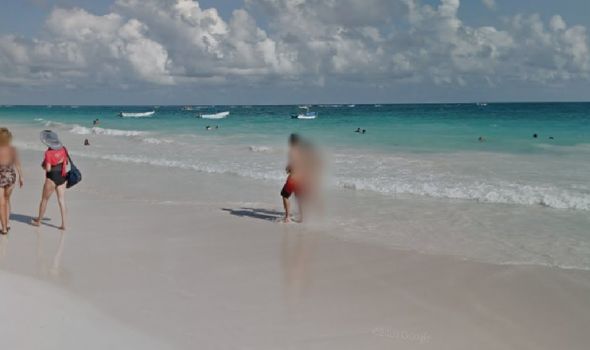 The woman and man head into the shallow waters of the tropical blue sea, where they proceed to strip off.

Both the female and male can be seen bending down to remove their swimwear, before flashing their bare bodies at the camera.

This is not the end of their display, though.

The couple are then snapped revealing their bare bottoms directly into the camera lens.

While Google’s cars are usually able to speed away from any unexpected or inappropriate displays, the Google worker travelling along the beach on foot did not have the same experience.

As a result, the couple are able to follow the camera.

Luckily, they opt to put back on their beach outfits before doing so.

While the Google camera heads along the beach, the couple can be seen following the camera. 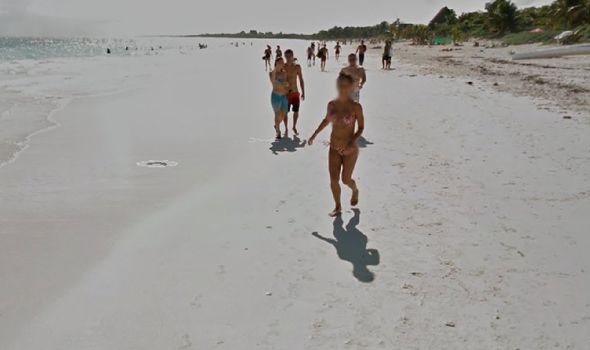 At one point, the female, dressed in a pink bikini, climbs atop her male counterpart’s shoulders.

She can be seen with her arms outstretched, appearing to try and gain the camera’s attention.

It is clear Google has also had to take further steps to conceal their naked display.

When users visit the website now, both of the couple’s bare bodies are completely blurred.

“Users can refer to Google’s content policy instructions to understand what content is prohibited and restricted, such as not allowing pornography, explicit or sexually suggestive content,” a Google spokesperson previously said on the subject of explicit appearances on the Street View website.