Home » Travel » Florida on the quiet: Head to Vero Beach for old-fashioned charm

Florida on the quiet: Dodge the Disney hordes and sky-high prices and head to upscale Vero Beach for old-fashioned charm (and ‘gator tail’ bites)

My son and I are walking along a shell-spangled beach. It stretches miles in both directions but there isn’t another soul in sight — just small birds playing tag with the incoming foam.

James, 23, had a tough time during the pandemic and I didn’t exactly breeze through it either so we wanted to regroup, somewhere warm, safe, relaxed.

So we fly into Orlando in Florida and dodge the Disney hordes. A 90-minute shuttle ride and we are at Vero (pronounced with a long e) Beach, which straddles a barrier island. The Indian River lagoon is on one side and 22 miles of clean Atlantic beach on the other. 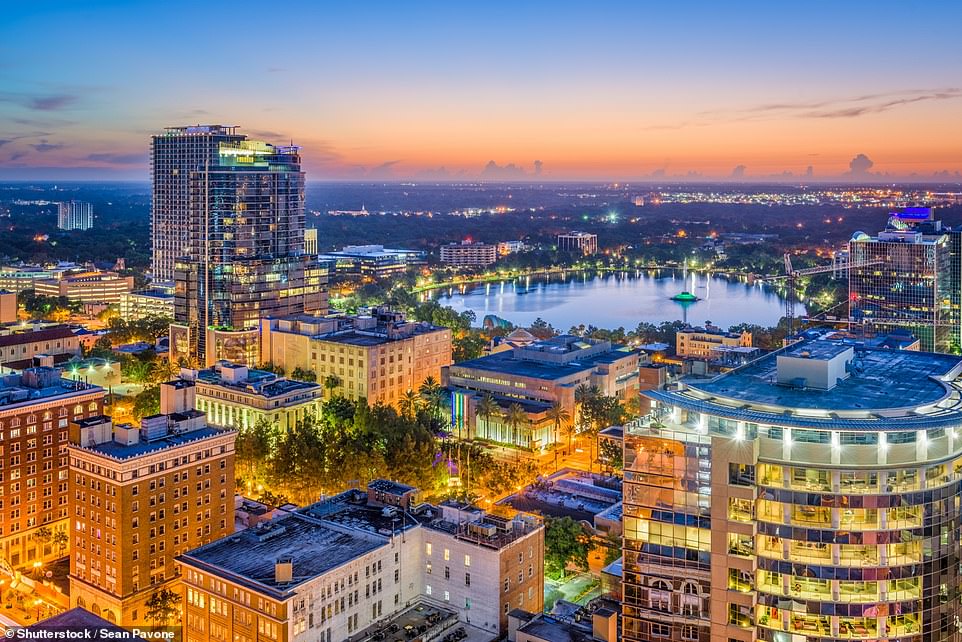 After arriving in Orlando, pictured, Jane and her son James dodge the Disney hordes and take the 90-minute shuttle ride to Vero Beach 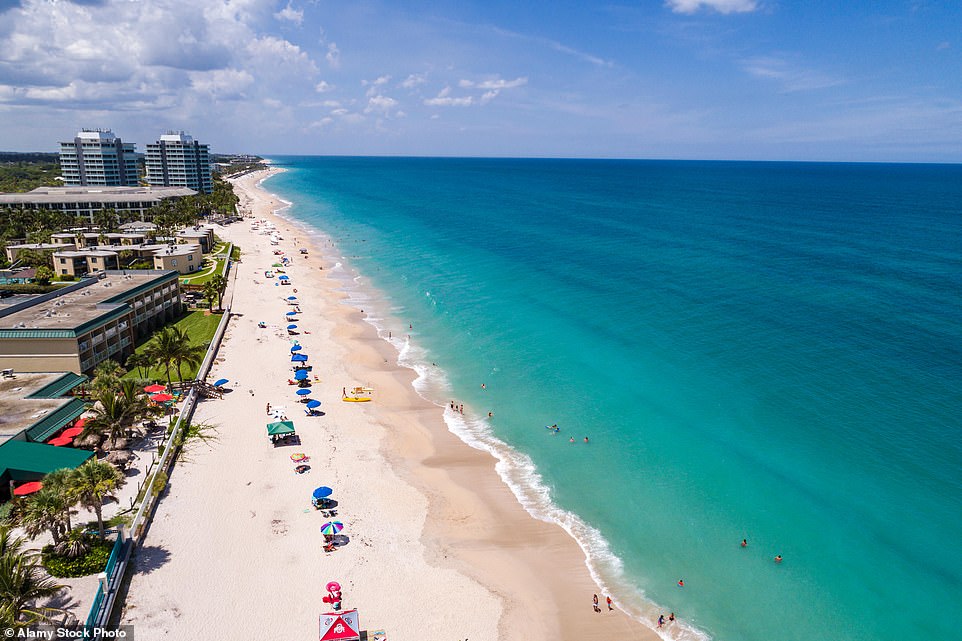 Tranquil: Vero Beach is bordered by the Indian River lagoon on one side, and 22 miles of ‘brisk and breezy’ Atlantic beach (pictured) on the other 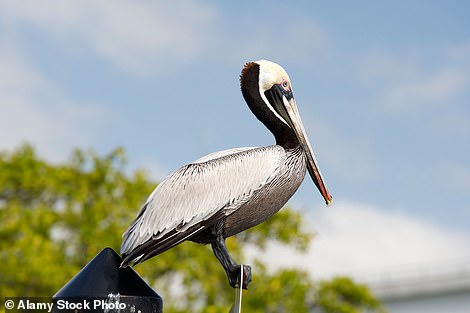 ‘James and I watch dolphins tagged by opportunistic pelicans (such as the one pictured) hoping for a free snack,’ Jane says of her tour of the Indian River lagoon

Beachside is brisk and breezy, country club smart without a single blade of grass out of place. Boutiques sit beside waterfront eateries. Yet twist around and you’re plunged into brooding swamplands with Spanish moss trailing down to acid green water. ‘Don’t feed the alligators’ warn the signs. Indian River lagoon is home to five state parks, four federal wildlife refuges as well as a national seashore.

James and I watch dolphins tagged by opportunistic pelicans hoping for a free snack. It’s the wrong time of year for turtles (nesting season runs from May through October) but we’re determined to see some gators. So we take a trip on ‘Capt. Bob’s’ airboat. Gliding away from the quay, Captain Bob Montuoro suddenly fires up the 600 hp engine and we shoot over the marshlands. A sharp turn and Bob cuts the engine. ‘Can you see? Just behind those grasses.’

We crane our necks and drop our jaws. An alligator lies just a few feet away. It’s a female and, nearby, a flurry of baby gators flip and tumble in the weed.

That night we sit at the bar of Walking Tree Brewery. ‘Gator tail’ bites are on the menu and I raise an eyebrow. ‘I will if you will,’ says James. And we do. It’s not bad, somewhere between chicken and prawn. 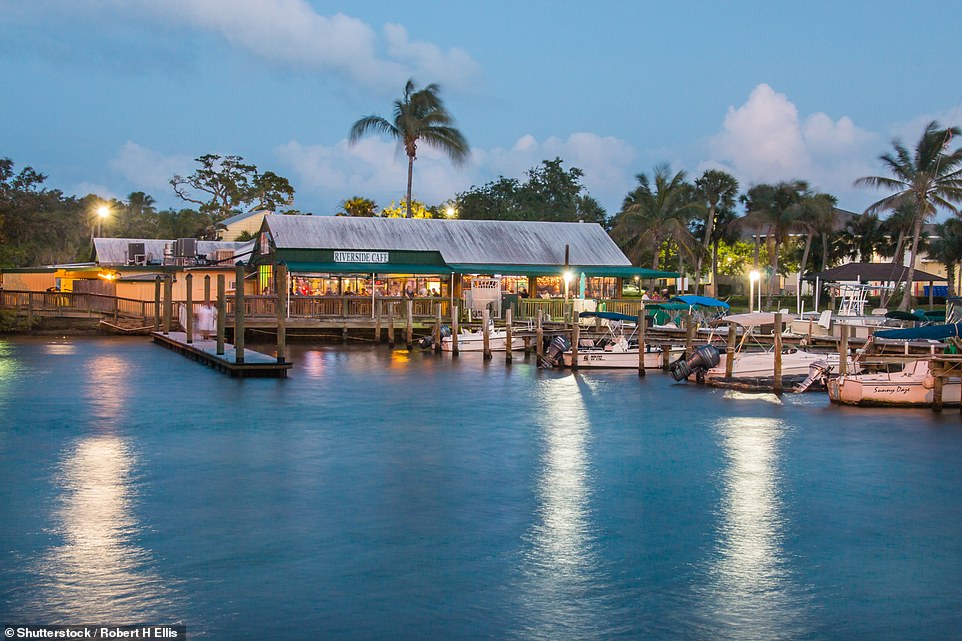 ‘We gravitate to the craft breweries and bars of Vero Beach which serve great grub,’ says Jane. Above is a waterside cafe on the Indian River Lagoon side of the city 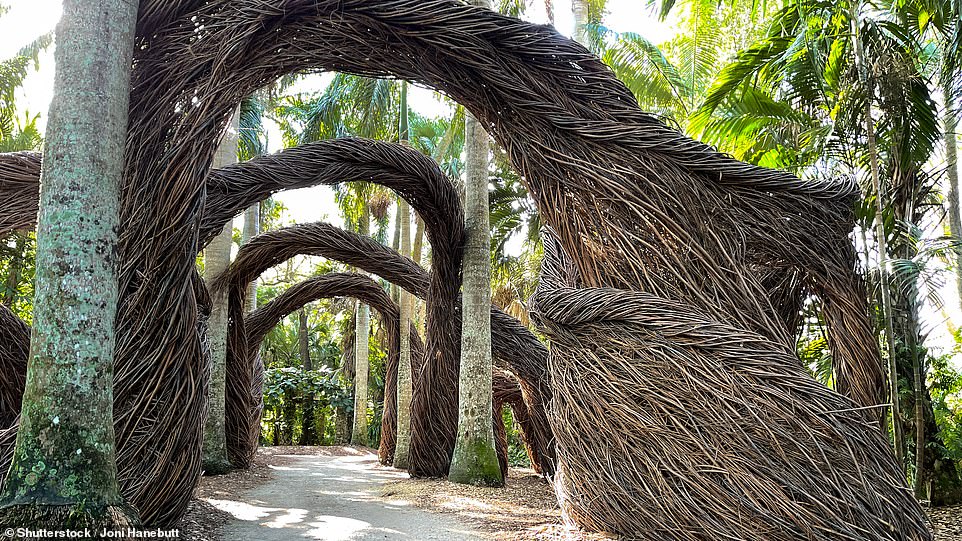 Jane says that the McKee Botanical Garden, pictured, ‘is a pleasant surprise’ with ’18 acres of subtropical vegetation’ 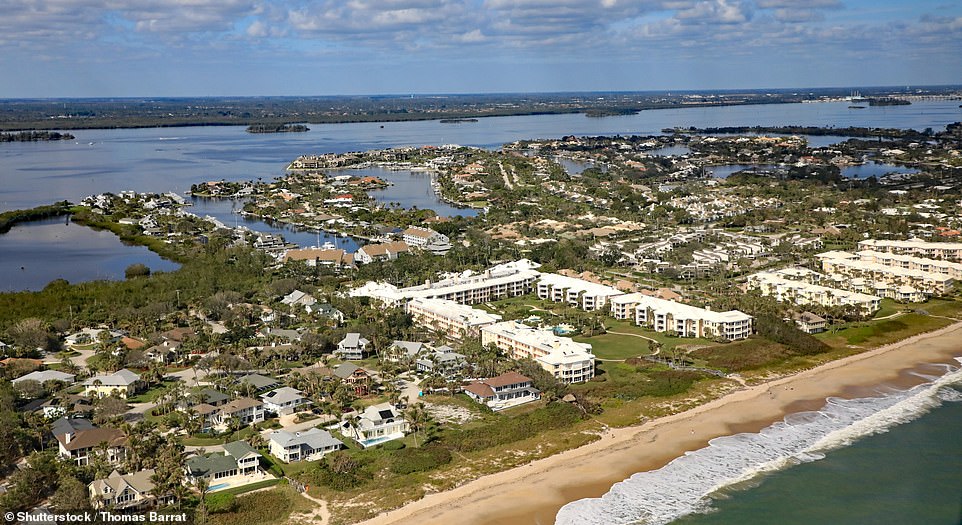 The seafront restaurants here may have the view but they’re overpriced with lacklustre food and service. We gravitate, instead, to the craft breweries and bars of Vero Beach which serve great grub. We spend a cracking evening at the Kilted Mermaid, sharing Cuban flatbread, grilled octopus and a vat of fondue while listening to exuberant Irish music.

Sadly the weather turns temperamental so James doesn’t get to surf. But we learn more than any human needs to know about oranges at the Indian River Citrus Museum, and the McKee Botanical Garden is a pleasant surprise — 18 acres of subtropical vegetation.

Another surprise is Vero Beach’s vintage and second-hand stores. The millionaire neighbourhood of nearby John’s Island means charity shop browsing frequently throws up bargains. I snaffle a pair of brand new Levi 501’s for £6.

Critics say Vero Beach is just too safe and sensible (it’s a prime retirement spot, average age well over 50). But, as James and I watch another perfect sunset slip over another pristine beach and munch our way through another pound of shrimp, we beg to differ.

Flights: Baby on board tool causes controversy amongst airline passengers