Emirates Boeing 777 SECONDS from disaster: Carrier launches investigation after Washington DC-bound airliner takes off too low and fast – at the very end of the runway

Emirates has launched an investigation after one of its Boeing 777s took off from Dubai, bound for Washington DC, too low and too fast – and at the end of the runway safety area.

The incident, which took place on December 20, has been described by one long-haul Boeing captain as ‘very dangerous’, with disaster averted with mere seconds to spare. A passenger on board at the time said it was ‘terrifying’.

According to data transmitted by the aircraft’s transponder it accelerated to at least 216 knots (248mph) – far beyond a normal take-off velocity – before leaving the ground. The aircraft then became airborne but only reached a height of 75ft as it flew over buildings, at which point it had accelerated to 234 knots (269mph). 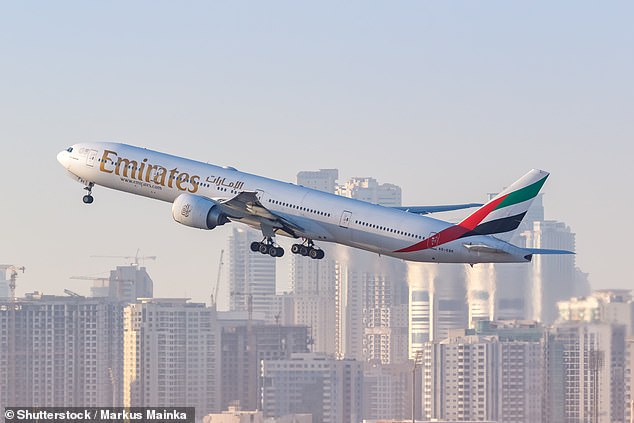 By comparison, according to website Onemileatatime.com, which analysed Flightradar24 data, the same service a few days earlier took off at 178 knots, before climbing at 190 knots to 225ft, then reached 750ft at 188 knots.

What’s more, the early-morning December 20 flight – EK231 – according to AV Herald, left the ground just 90 metres (295ft) from the radio beacon antennas positioned at the end.

Aside from the obvious dangers of flying so low and fast over buildings, events like this, known in the aviation industry as a ‘flap overspeed event’, can put dangerous stress on the aircraft, as it’s flying too fast for the flap setting.

The December 20 flight, which took off around 2.30am, climbed to a safe altitude and continued to Washington DC without further incident. 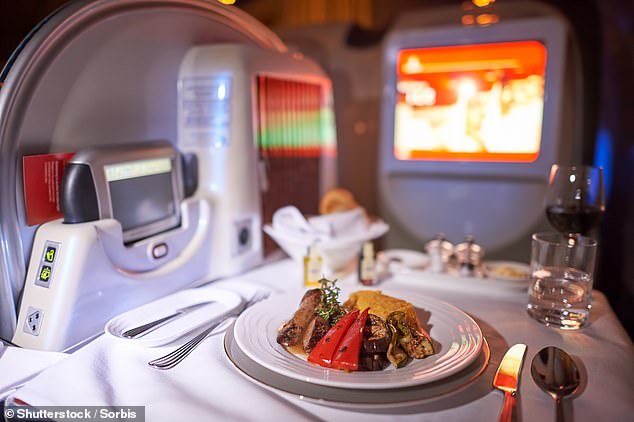 A luxurious Emirates 777 premium cabin. The carrier is renowned for its high-end cabins

At Washington DC it was inspected before making the return journey to Dubai, where it reportedly underwent a four-day safety inspection.

Several people who were on board the flight, or knew someone who was on it, took to aviation websites to comment.

‘I was on that flight and let me say that was the most terrifying thing I have ever experienced,’ one passenger wrote in the comments section of a God Save The Points story about the incident.

Richard Guest, commenting on onemileatatime.com, said: ‘I am a very frequent flyer with Emirates and not at all a nervous flyer. At 2:30am, you’re not really wide awake since most of us on this flight also came via a connection. I did notice that we just didn’t seem to be gaining altitude like normal. It did “freak me out” a bit, but I kept thinking, well, it’s because it’s so heavy with fuel for the 14-hour flight. I know the Dubai USA flights are always heavy at take-off.

‘None of the flight attendants ever said a word to me (I was in First) about this, and I didn’t really think to ask in the latter half of the flight.’

Another wrote: ‘My husband was on the flight, and he and the guy across the aisle from him were terrified during take-off. My husband thought the engine was damaged, although he said everything felt normal after take-off.’ 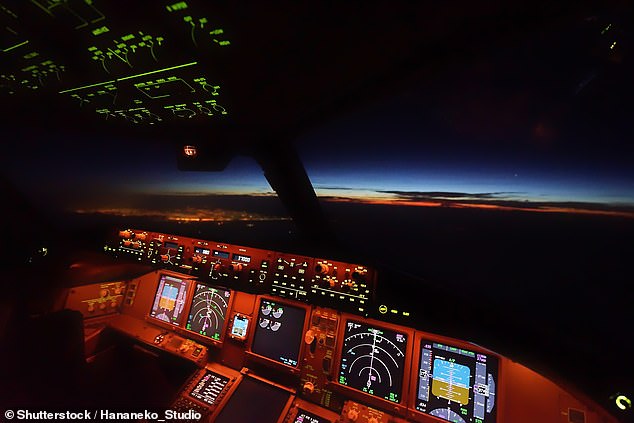 The Boeing captain, who has experience flying 747s and Dreamliners and who spoke to MailOnline Travel anonymously, said: ‘This incident was very dangerous and could easily have led to the aircraft hitting a building or indeed the ground.

‘It appears that the aircraft had both a tyre and flap overspeed event, going too fast on the ground for the tyres and too fast in the air for the wing flaps they had selected.

‘On that basis returning to Dubai would have been a more appropriate course of action than continuing the flight. The fact that the aircraft didn’t fly for four days after returning to Dubai indicates that Emirates felt it needed an extensive engineering check before being fit to fly. So it should not have operated Dubai-Washington-Dubai [14 hours each way] before the checks were completed.’

As the incident is being investigated, Emirates has offered no explanation for it and no cockpit recording has yet been released.

This means that the aviation community has been left to speculate about the possible causes, though there is one potential clue.

It could be that an incorrect ‘target’ post-take-off altitude had been inputted into the plane’s computer before take-off. 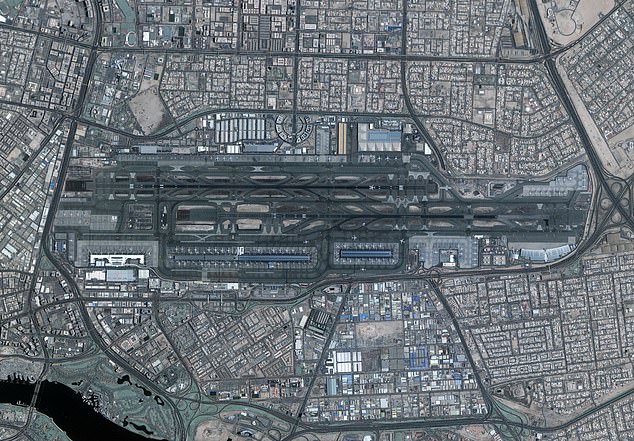 Pictured above is Dubai airport. The incident took place on runway 30R, with the plane eventually carrying safely on to Washington DC

Shortly after the incident, Emirates issued a Notam (notice to air missions) crew alert to remind them not to set the altitude on the ‘master control panel’, which controls the autopilot, to the airport altitude.

It read: ‘Crews are reminded that there are no… requirements to change the MCP [master control panel] after landing or shutdown.

‘There have been times when the MCP “altitude window” has been set to the airport elevation, which may cause issues on the subsequent departure. Crews shall not set airport elevation on the MCP after landing or shut down.’

One theory is that the previous crew had set the ‘autopilot altitude target window’ to 0000 when they shut the aircraft down and that this put the ‘flight director’ into the wrong mode, ‘maintain selected altitude’, instead of TOGA (take-off/go-around).

Put simply, the ‘flight director’ is a dot on a computer screen in the cockpit that indicates the pitch ‘attitude’ that the aircraft should be flown at. And in this instance, it’s possible that it was directing the crew to point the aircraft too low on take-off and not at the correct 12 to 15 per cent angle.

The flight director doesn’t control the aircraft, it’s a guide, and the autopilot in a 777 doesn’t kick in until at least 200ft in altitude, so as the plane is going down the runway, the pilots are in full manual control.

However, it could be, the Boeing captain said, that the pilots became distracted by the unusual computer indications.

He said: ‘The Flight Director bar should indicate the target pitch attitude for take-off and it is up to the pilot to rotate the aircraft up to this attitude to climb away at a safe speed.

‘”Rotate” is called by the monitoring pilot – the one not with hands on the controls – and the handling pilot then pulls back on the control column to rotate the aircraft to the take-off pitch attitude.

‘If he/she doesn’t call “rotate”, then the handling pilot should do it anyway as they should be monitoring aircraft speed during the take-off roll [the correct take-off speed is worked out beforehand depending on the aircraft’s weight and weather conditions]. My guess here is that the monitoring pilot was confused by the strange appearance of the Flight Director – again I’m guessing here that it was in ALT mode not TOGA – and “tunnelled in” on that distraction, missing the necessary call of “rotate”. ‘ 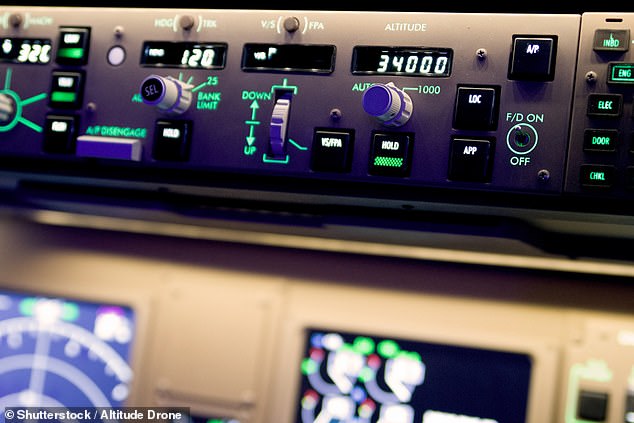 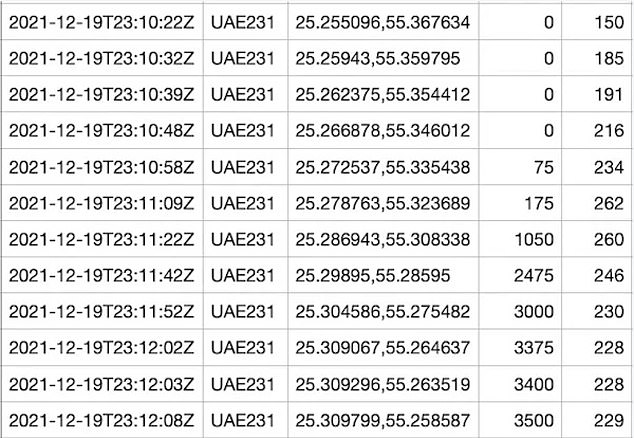 This data from Flightradar24, published by Onemileatatime.com, shows how the December 20 flight was still on the ground at 216 knots (248mph)

He added: ‘It appears that once the error was identified, they managed to engage some suitable autopilot modes, climb the aircraft and retract the flaps – but this took time with the aircraft travelling much faster than would be normal for the altitude they were at.

‘I would guess that some Emirates pilots have generated a “habit” of setting 0000 in the autopilot altitude target window as part of shutting the aircraft down. Why? Probably because they thought it was a good idea in order to prevent possible altitude setting errors by the next crew – because everybody knows 0000 is incorrect.

‘The issue is that if the setting of 0000 is missed in the cockpit setup, it has the ability to generate some dire consequences. The moral of the story – operate the aircraft to Boeing/Emirates standard operating procedures, don’t introduce procedures of your own, particularly in critical areas.’

An Emirates spokesperson said: ‘We can confirm that a technical incident occurred on the departure of EK231 on 20 December 2021. The flight continued safely to its destination, and after technical clearances the aircraft operated the return flight to Dubai. The incident is under investigation, and we are unable to provide further comment at this time. Safety is at the heart of everything we do and would never be compromised.’

The U.S Federal Aviation Administration (FAA) said: ‘The FAA is aware of this incident. Civil aviation authorities in the United Arab Emirates are in charge of the investigation.’

The time an artist used 1,000lbs of CHEESE to decorate a hotel room