Dive into these Balearic beauties: Majorca, Ibiza, Menorca and Formentera have all joined the green list. But don’t delay if you’re longing for a dose of Mediterranean heat

They were dancing in the street on Thursday night in Ibiza Town on hearing that we are on our way. Which is understandable. Around five million British tourists visit Spain’s Balearic Islands each normal, non-Covid year.

That’s more holidaymakers than we send to Portugal (3.3 million) and Greece (3.4 million) and about the same as the number who visit the U.S. (4.8 million). So this is a big moment. Being shifted from amber to green means no quarantine is required on return to the UK, and we have to take only two tests rather than three.

The joy of the Balearics is that each island has its own appeal: Majorca’s rugged coastline and wonderful beaches; Menorca’s quieter shores and interior; Ibiza’s party scene. And now we can go! 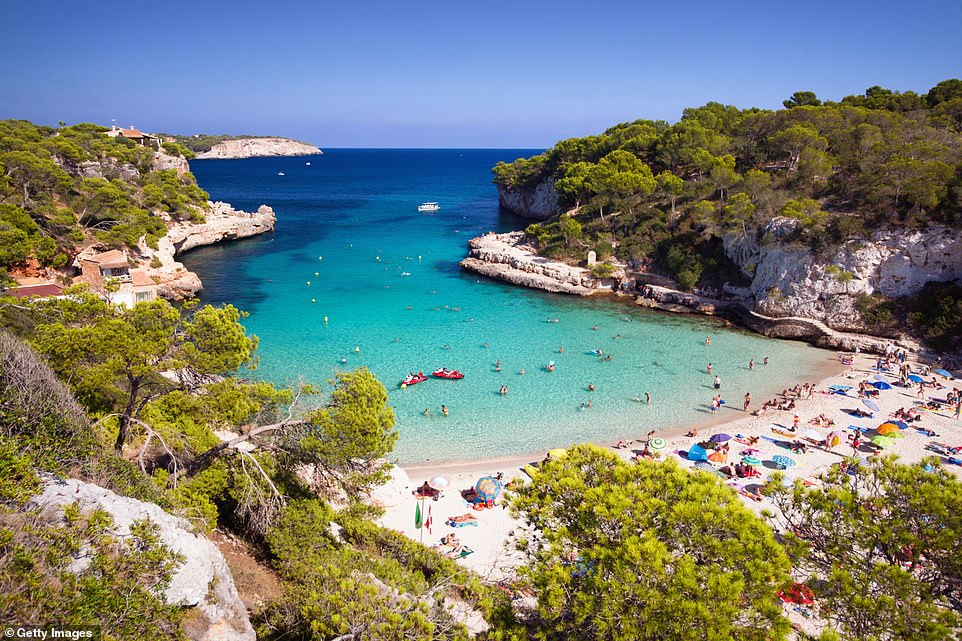 Island in the sun: Majorca is the biggest island in the Balearics at 47 miles long and 62 miles wide. Pictured is Cala Llombards beach

Yes, there may be some overdeveloped spots on the Bay of Palma, on the south-west coast, with high-rise hotels, gaudy clubs and cheap bars — notorious Magaluf being at the heart of the mayhem. But other parts of Majorca, the biggest island in the Balearics at 47 miles long and 62 miles wide, can be blissfully quiet.

Port de Soller on the north coast is one of the most popular family resorts, with plenty of beaches plus a lovely harbour with seafood restaurants. Then there is the fine Blue Flag beach in the horseshoe-shaped bay of Port de Pollenca in the northeast, overlooked by the dramatic Serra de Tramuntana.

These mountains cross the north of the island, with pretty villages to explore including Deia, where the poet and novelist Robert Graves lived in 1929, describing his new home as offering everything he could want including ‘sun, sea, mountains, spring water [and] shady trees’.

Add to this the vibrant capital city, Palma, with its famous cathedral, winding lanes and art museums, and there’s much more to Majorca than mass tourism.

TAKE TO THE HILLS 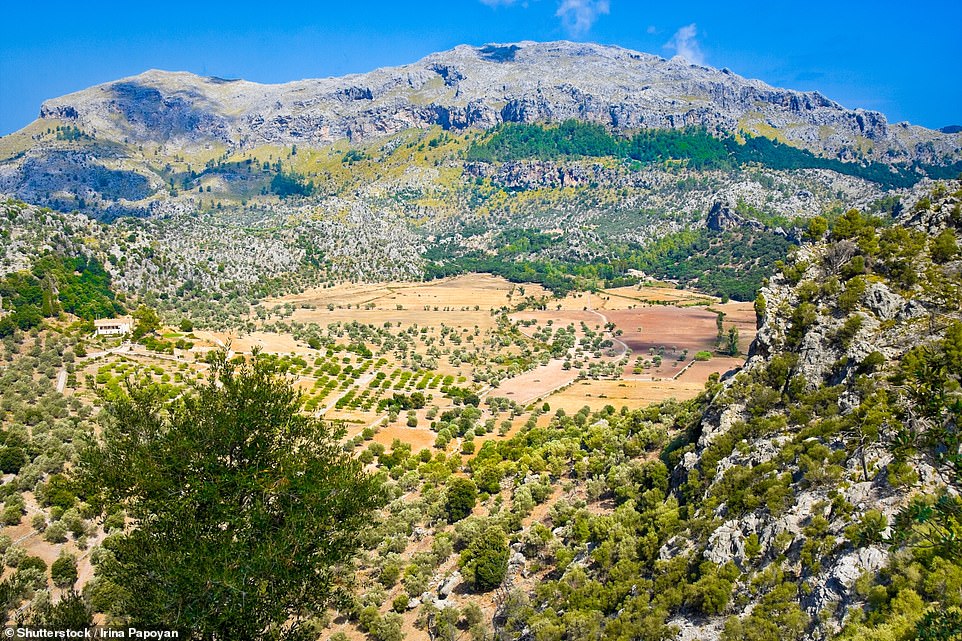 Explore the Serra de Tramuntana by foot on a walking holiday beginning in the charming mountain village of Esporles. Guided hikes are arranged along the rugged coastline, through holm oak forest and along ancient pilgrimage trails.

Details: From £1,070 pp for eight days including flights and hotels (responsibletravel.com).

Stay on the edge of the lovely village of Calonge on the south-east coast in Villa Es Fasser to slip into the easy rhythm of local life, while enjoying your infinity pool and comfortable abode. The old stone building, with parts from the 17th century, has been renovated to a high standard with a fantastic dining terrace. 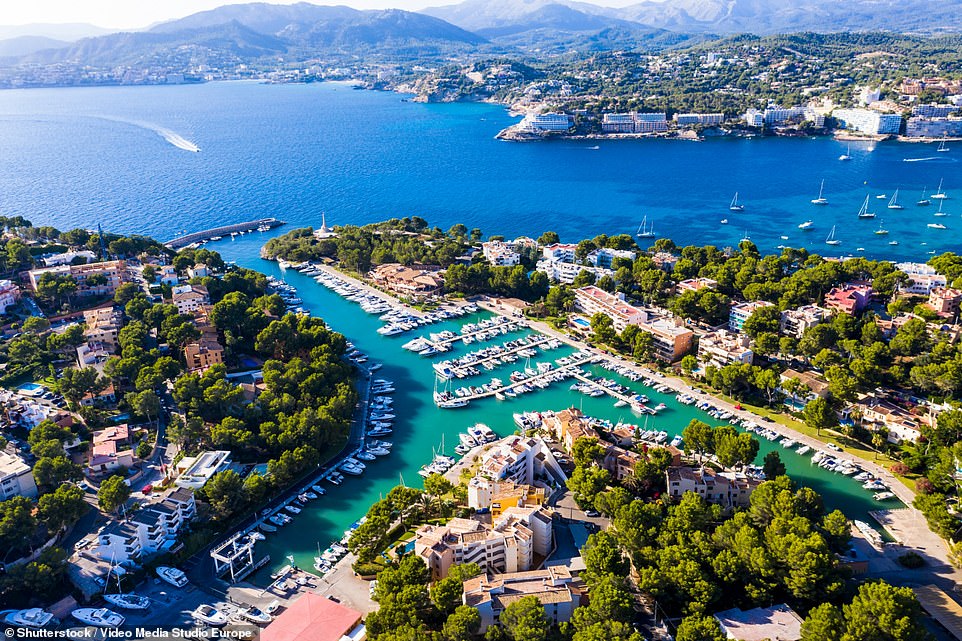 Enjoy a glass of sangria or two while watching the sunset from the terrace bar by the pool of TRH Jardin del Mar hotel, which is on the edge of Santa Ponsa town, on the south-west coast. This simple, three-star hotel — with enticing prices — overlooks the sea. It’s a 15-minute walk to the lively restaurants and bars of the town.

Details: From £495 pp self- catering for a week, with Heathrow flights (tui.co.uk).

Just south of Palma, but close enough to enjoy day trips to explore Majorca’s fascinating capital, Hotel de Mar Gran Melia is a five-star hotel with designer rooms that have balconies facing the sea. There are two pools, a spa and a high-class restaurant with a seven-course tasting menu.

Details: From £1,688 pp B&B for a week with return Gatwick flights and private transfers (prestigeholidays.co.uk).

Base yourself at the comfortable and stylish Ca’s Curial agroturismo hotel, tucked away on farmland by Soller in the north-west. Visit the nearby beaches, explore the walking trails or simply lie on a lounger beneath an olive tree and enjoy the warmth and the quiet of this rustic setting.

Details: A week from £880 pp B&B including two dinners and detailed walking notes for the area, but not flights to Palma (inntravel.co.uk).

Close to one of Majorca’s finest beaches in the south-east, Can Ferrereta is a stylish new 32-room spa hotel that opened in May in a restored 17th-century mansion. The look is minimalist and cool, and the building is surrounded by lush gardens with a pool. It’s close to the quiet, traditional town of Santanyi.

Details: From £2,560 pp B&B for a week with flights and car hire (originaltravel.co.uk).

In the far south of the island, Santanyi feels far removed from the high-rise hotels of some parts of the Bay of Palma. Hole up in the splendid, super-comfortable Cas Padri Pons villa, sleeping six. It has plenty of availability this summer, is in the historic town centre and has a lovely courtyard pool. 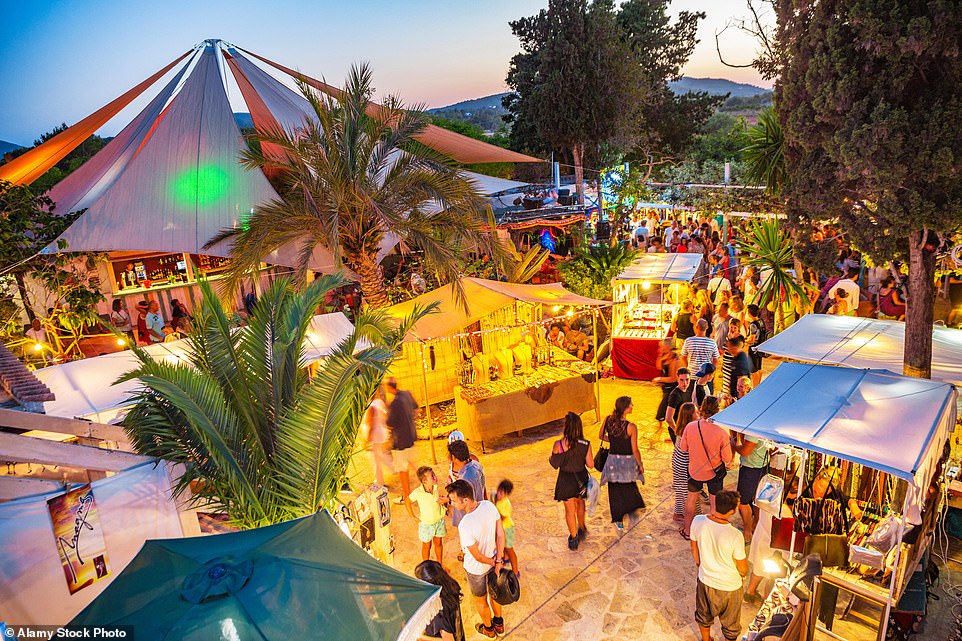 Colourful: ‘Hippy Markets’ are held on Wednesdays at Punta Arabi and on Saturdays at Las Dalias (above)

For many years from the 1960s, Ibiza — the closest of the Balearic Islands to the mainland — was a hippy retreat.

Then ‘super clubs’ began in the 1980s and 1990s and the island switched from being an escape from the crowds to a place that attracts them. Now, some consider Ibiza to be the globe’s ‘clubbing capital’.

There are still a few hippies around and about — both from the old days and modern versions — with self-styled ‘Hippy Markets’ held on Wednesdays (at Punta Arabi) and on Saturdays (at Las Dalias). Arts and crafts fairs are common across the island, too. Most of the big clubs, open well into the early hours, are on the road between San Antonio, a sprawling resort on the west of the island, and Ibiza Town, the pretty whitewashed capital, on the east.

Ibiza Town is the the pretty whitewashed capital, on the east, where you’ll find sophisticated restaurants and hip bars

THE ISLANDS’ GREATEST HITS, FROM RAFAEL NADAL to  MAYONNAISE

Ibiza Town is home to a 13th-century cathedral, an excellent archaeological museum and sophisticated restaurants and hip bars. For tranquillity, head to the villages in the hills in the north, or take the 25-minute ferry to Ibiza’s sister island of Formentera, the smallest of the four main Balearic islands, 11 miles to the south.

Stay at the minimalist, celebrity hangout Nobu Hotel Ibiza Bay — part-owned by Robert de Niro — to enjoy an oasis of calm with a spa and Japanese restaurant, one step removed from the hurly-burly of the island’s busiest clubs. It is situated next to a quiet sandy beach, yet is just a 20-minute walk from the cobbled streets of Ibiza Town.

On the west coast between Cala Conta and Cala Codolar, the whitewashed, ‘all-suite’ 7Pines Resort Ibiza offers suites that all have a balcony or terrace facing either the sea or the well-kept garden.

Ibiza is not all about clubbing or lying out in the sun — it’s a great island for hiking, too. Explore local villages and remote coastlines well away from the thump of dance music on a group trip starting in Santa Eulalia on the east coast, where you are based and from where excursions are made across the island to San Josep and Es Portixol.

Overlooking Playa d’en Bossa, the popular beach just south of Ibiza Town, Ushuaia Ibiza Beach Hotel is for party-lovers who do not like slumming it.

The five-star hotel has plush, contemporary rooms and is also home to DJs and a stage by the pool. Plenty of dancing goes on well into the night. There’s also a sushi restaurant and an oyster and caviar bar. 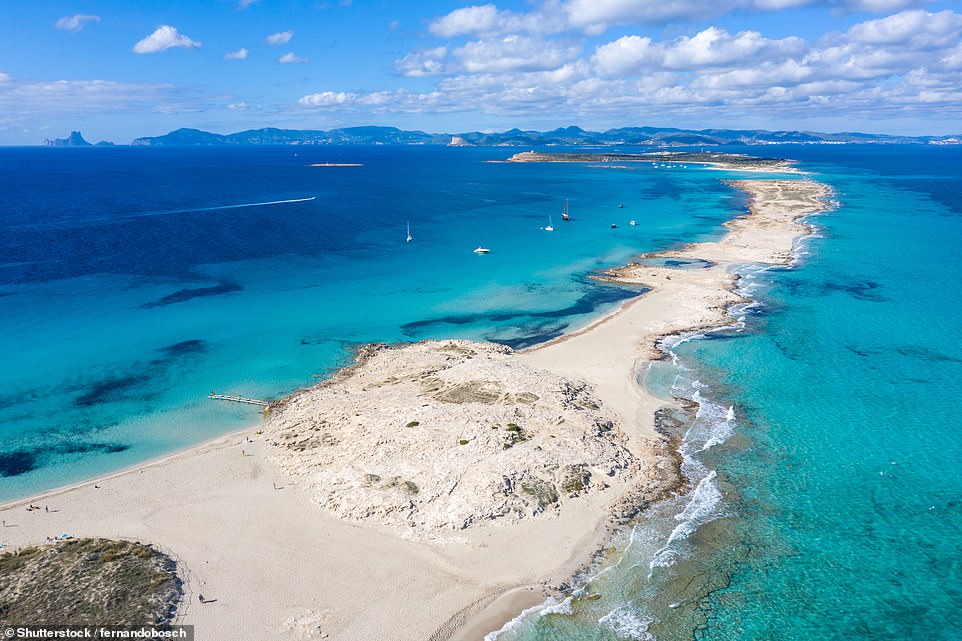 Ibiza’s sister island of Formentera was once a hippy HQ (Bob Dylan was a fan) with tiny B&Bs, but now there are hotels

From one of the bungalows at Insotel Club Maryland on Ibiza’s sister island of Formentera (a short ferry hop away, tickets cost £19), it is just a stroll to a quiet, sandy beach. Formentera was once a hippy HQ (Bob Dylan was a fan) with tiny B&Bs, but now there are hotels, although it is nothing like as developed as Ibiza itself.

This one has charming gardens, a pool and children’s play areas.

Casa Pacha Formentera is a new boutique hotel on Migjorn Beach in Formentera (it opened in May) with 14 rooms in neutral colours and a pared-back style created by Pacha — perhaps Ibiza’s best-known nightclub brand.

But the emphasis at the new hotel is on switching off, not dancing the night away. It sells itself as being a ‘barefoot bolthole’, with yoga and sunset DJ sets (not too loud). 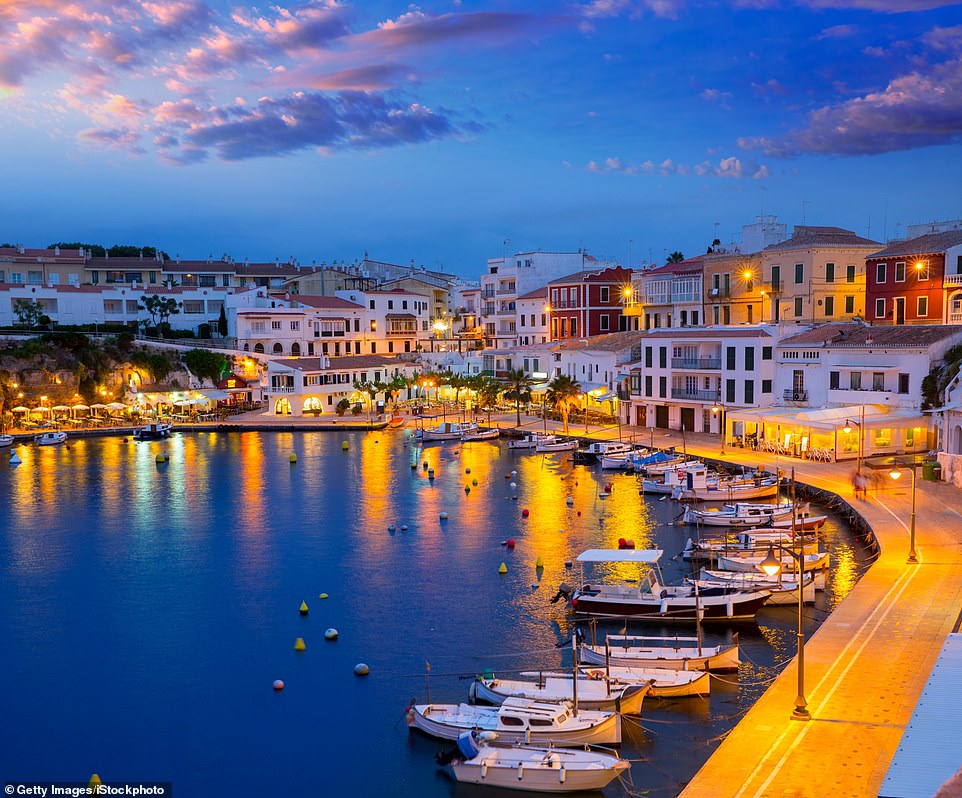 Menorca is much sleepier with little beaches dotted around the coastline between rocky outlets. Pictured is a pretty harbour in Mahon

MAKE SURE YOU KNOW THE RULES AND REGS

Compared with Majorca and Ibiza, Menorca feels like a backwater. Although the second largest island, at 30 miles long and ten miles wide, it is relatively undeveloped, with a hilly interior containing farmland and wooded ravines.

Little beaches are dotted around the coastline between rocky outlets. To reach just about anywhere involves driving along the main ME1 road, which connects the small towns of Ciutadella and Mahon (also known as Mao), the capital, with a population of 29,000.

On A hill facing Arenal d’en Castell Bay, home to one of the island’s largest white-sand beaches, the Palladium Hotel Menorca opened earlier this year — so there are some tempting prices to get guests through its doors.

It has a minimalist style and comes with three pools and three cocktail bars, too. It’s next to a water park and close to the S’Albufera nature reserve, which is great for bird-watching.

Cala en Bosc is on the south-western tip of Menorca, marked by the landmark Cap d’Artrutx lighthouse, and it is the best spot on the island for sunsets.

Stay at the modern and comfortable, adults-only MenorcaMar apartments to hole away in one of the island’s quietest corners. It’s just 100 metres from the sea and has a cocktail bar and restaurant.

Finca Lucilla, which sleeps up to nine people, comes with its own pool (18m x 6m), a badminton net, table tennis, a boules pitch and — somewhat incredibly — a cricket net with a bowling machine. The old stone building — converted with sound systems and wifi — is in countryside close to the village of Sant Climent, surrounded by an olive grove.

Right by Son Bao beach, the longest on the island at one-and-a-half miles, Sol Milanos Pinguinos Hotel is great for families — it has a giant pool with a shallow area and a children’s playground.

Rolling sand dunes mark the coastline here, much of which is designated a nature reserve. 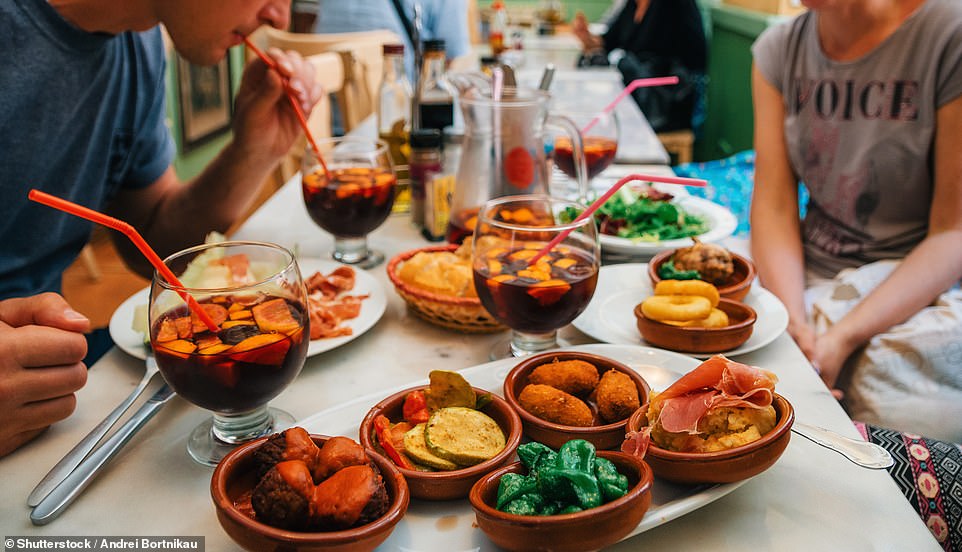 All together now: Menorca and its cuisine is great for families. Pictured is tapas and traditional Spanish sangria 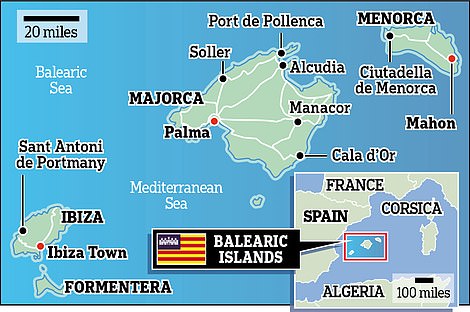 Majorca, Ibiza, Menorca and Formentera have all joined the green list

Relax in the southern beach resort of Cala en Porter while staying at a great clifftop hotel, Playa Azul Hotel, looking down to the sea.

This area was one of the first to be developed in Menorca but it is not overrun and the water is gentle and shallow, making it great for families.

The space is shaped like Lulworth Cove in Dorset. The hotel has a children’s pool, plus a cocktail terrace.

Explore the rolling hills of the interior by e-bike, stopping at remote villages, before cutting to the coast and passing by ancient crumbling forts on a self-guided trip.

Hotels are booked ahead for you and luggage transported, so it really is an easy ride, although you can opt for a standard bike (which costs £130 less than the price below).

Arnold Donald to step down as Carnival Corp. CEO in August: Travel Weekly