ONBOARD THE AZAMARA ONWARD — The moment I walked into the Atlas Bar, I knew I wanted to order a drink there.

Maybe it was the warm ambiance of the globe lighting dotting the walls, the hushed golden hues of the curved couches and the comforting thick olive curtains draping the windows. Maybe it was the feeling that I was no longer on a cruise ship or even in the Mediterranean: I could be anywhere, in any era, transcending all time and space.

But this feeling that I needed to pull up a chair at the bar was immediate, even before I laid eyes on the menu of a dozen specialty drinks.

The Atlas Bar is the newest concoction from Azamara, and it only exists on the Azamara Onward, which set sail on its maiden voyage on May 2 from Monaco. The Onward has the same layout as Azamara’s other three ships, and the bar replaces what is usually the library (which was seldom used for picking up books but became a space for meetings or cocktail hours).

I was on a four-day press voyage from Barcelona, and I often found myself at the Atlas at night. I wasn’t the only one. The bar lured people in despite a pre-inaugural tech issue that caused the bar to switch off the music. One evening, my guest and I began the night as the only people in the silent bar, but the room was packed when we left at 10 p.m. The same thing happened the next night. On the Onward, it was the place to be. 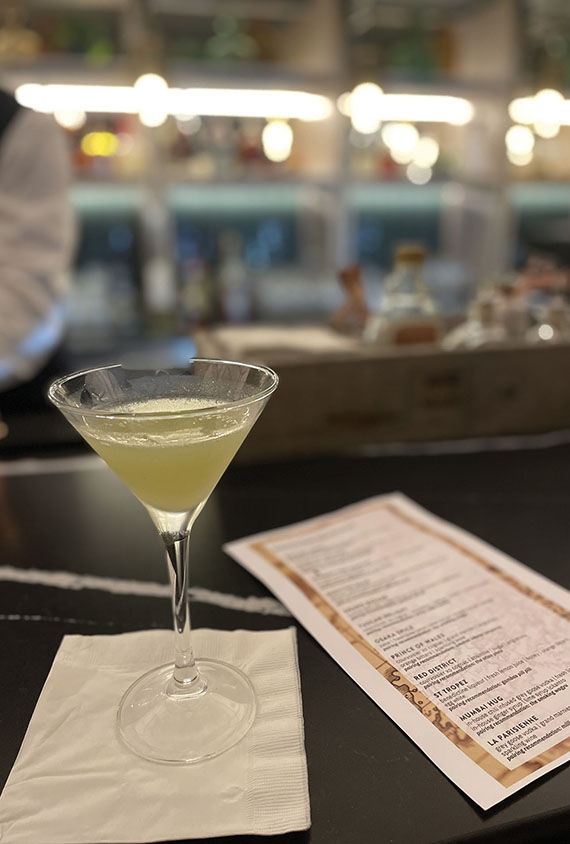 I attempted to work my way down the menu, but I found myself taking my time to savor each drink. The flavors were amazingly complex. The Mumbai Hug provided a kick of heat with the help of in-house chili-infused Grey Goose vodka, fresh lime juice, in-house ginger syrup, lime syrup and cilantro. The Heart of Azamara, one of the most ordered choices, combined Grey Goose vodka, fresh strawberry puree, fresh lime juice, passionfruit nectar, Galliano and absinthe and went down smooth. The Tuscan Delight, made with Courvoisier XO cognac, amaretto, Kahlua, cream and coconut syrup tasted like toasted hot chocolate with hazelnut.

Not only were the drinks a delight, but so was watching how they were made. Several drinks were delivered with a smokey essence and an Instagramable moment. The bartender would mix the drink and then place it under a tall glass dome connected to a smoker. He then set a spoonful of oak chips ablaze and we watched the dome fill with a white smoke until I could barely see the drink. My bartender then made a show of unveiling the cocktail, lifting the dome then lowering it a few more inches, pressing the smoke into the drinking glass.

I could smell and taste the smokey essence as I took my first sip of the Red District, which mixed Courvoisier XO cognac, absinthe, sugar and Angostura bitters. Smoking is also called for in the London Fog, which uses in-house, earl gray-infused Tanqueray gin; fresh lemon juice; simple syrup; and egg white. But any drink can be smoked if you ask.

Drinks here are specialty and unlimited for guests with the “ultimate beverage package,” which is $24.95 per day. Individually, drinks are $17.95, just enough to encourage guests to upgrade their drink package.

The bar also serves small bites, ideal for mid-day or late-night affairs. The choices are broken up into cold items like beef tartare, hot dishes like sweet king prawns and deserts like a chocolate globe. What caught my eye was the millionaire fries, made with chunky French fries, foie gras, truffle aioli, gruyere hollandaise and parsley.

Like the cocktails, these plates come with an extra charge. Small plates are $6.50 (yes, even the millionaire fries) and are not included in the ultimate beverage menu.