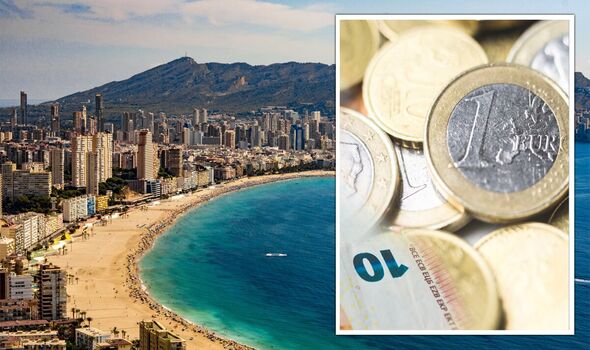 Spain’s Valencia region will introduce the tax from December 19, 2023. Local councils will be able to charge tourists up to two euros per night under the tax.

Benidorm, one of the UK’s top destinations in Spain, has already said it will “never” apply the tourist tax.

Other areas of Valencia may decide to and there are fears that Benidorm could later cave under the pressure.

The Valencia region also includes other popular holiday destinations such as Alicante and the Costa Blanca.

The tax will be known as the Valencian Tax on Tourist Stays (IVET) and could bring in 30 million euros a year to spend on green projects.

Cruise passengers will also be hit by the tax and will be charged for overnight stays in the area’s ports.

Children under 16, disabled people and people participating in university events will be exempt from the tax.

The tax will be just 50 cents for people staying in hostels but will go up to two euros for five star hotel stays.

The majority of accommodation on the Costa Blanca is three and four star hotels which will be able to charge one euro per night.

Cruise tourists will have to pay 1.50 euros to visit the area in an unwelcome blow to the industry.

All tourists who have to pay the accommodation tax if they stay in one of the local areas enforcing it.

Spas, campsites, motorhome sites and villas will also be included in the tax if an area decides to apply it.

However, many groups have led protests against it as they say the industry has suffered enough since the pandemic.

The campaigners said: “Now is not the time to impose any sort of tourist tax. Tourism is the activity that has suffered the most during the pandemic.

“It is still a long way from recovering employment and turnover levels from before the Covid crisis.

“Tourist convalescence will last three or four years. Tourism has lost competitiveness in these two long years of pandemic.”

The group said there shouldn’t be any increase in tax pressure and policies must focus on improving quality and facilitating the arrival of tourists.

Benidorm has yet to confirm its stance since the policy was announced but last December its mayor, Toni Perez, said: “No and never! We not apply it!”

He said that asking holidaymakers to pay an extra fee would penalise tourists and rejected the idea of a tax.

Perez said that Benidorm would resist all attempts to apply it and Alicante has also previously said it would not apply it.

Barcelona has plans to charge cruise tourists more to visit the city while it already has a tax for overnight guests.

The most scenic area of the UK has been named – 6,000 Britons had their say – ‘paradise’