Starry, starry sights: 2019 is a stellar year for astronomy – and you can revel in the drama on a galaxy of fascinating breaks from meeting astronauts in Arizona to star-gazing in the Maldives 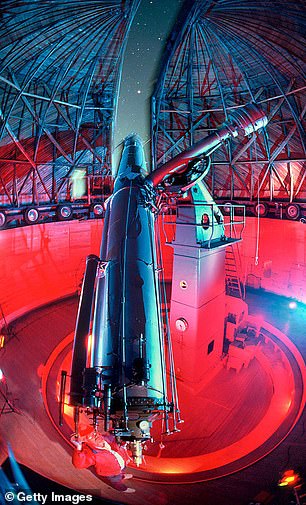 The American West is all about space, but there are few places where you feel as close to it as Flagstaff in Arizona. Especially the Lowell Observatory, from where the planet Pluto was discovered in 1930.

Megan, one of the staff, shines a laser into the sky, tracing the constellations of the Big Dipper, Orion’s Belt and Ursa Major. ‘Oh Leo, he’s so cute,’ she says as if talking of DiCaprio instead of a constellation of stars that are light years away.

This town, close to the Grand Canyon, was one of the pioneers of the Dark Sky movement. There are now several dark sky sites in the UK, including the Brecon Beacons in Wales, Exmoor, Galloway in Scotland and Kielder Forest in Northumberland. They’re all locations with especially low light pollution.

This star-gazing thing is new for me. When I was young, I moved from being too young to stay up for The Sky At Night to never staying in for it. Recently, though, I keep finding reasons to look upwards, to chart the North Star, and watch the moon wax and wane. The view’s been pretty much the same for millions of years, yet you’ll always find something new, clear skies permitting.

And it’s a topic filled with enthusiasm. Grumpy astronomers don’t exist – unless there’s total cloud cover – and 2019 is a stellar year astronomically. July sees a major solar eclipse in South America and the 50th anniversary of Apollo 11 landing on the moon.

Flagstaff has its own place in America’s space history. For most of us, it’s as close as we’ll get to space. All Nasa’s astronauts, including Neil Armstrong and Buzz Aldrin, trained at the Sunset Crater National Monument, 20 miles outside Flagstaff. Now a national park, it’s a lava-filled landscape straight out of Doctor Who.

The training rover that later Apollo crews used to navigate the craters is on display at the US Astrogeology Center on North Gemini Road. They like their cosmic street names in Flagstaff.

Ring a very low-tech bell and a scientist will show you around for free. When you bring your eyes down from the skies, Flagstaff is a cool college town with craft breweries, several with celestial names, and restaurants, while the nearby tourist office has a model of a spaceman to pose by. As astronomy holidays go, it’s perfect.

If you want to meet a real, live spaceman or woman though, there’s nowhere better than Starmus, a glorious Glastonbury for nerds. It’s the Comic Con of the astronomy world, set up by Queen guitarist Brian May and professor Garik Israelian (who supervised May’s astrophysics PhD), to mix science and music. 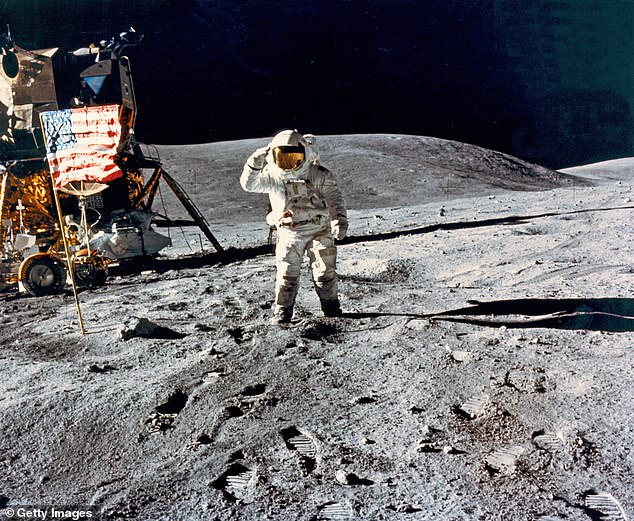 Apollo 16’s Charlie Duke walks on the moon. The Mail On Sunday’s Sarah Turner was lucky enough to have breakfast with him

It’s the sort of place where Buzz Aldrin flies in, astronaut Sharon Magus is mobbed for selfies and you can hear guitarist Steve Vai and composer Hans Zimmer perform at night. And at breakfast, an American man in a blazer and a blue, button-down shirt asks, very politely, if he can share my table.

When he sits down, I realise it’s Charlie Duke of the Apollo 16 mission, which means I’m having breakfast with a man who walked on the moon. Only 12 people have ever walked on the moon and, those still alive are in their 80s and 90s.

Charlie is the perfect breakfast companion; endlessly patient with people who ask very obvious questions over croissants and coffee.

Israelian, the event’s co-founder, says: ‘Music and science complement each other. Art is pure creativity from the heart and mind, while science was thought to be pure logic, but in both inspiration and excitement are really important.’

And I had breakfast with a man who walked on the moon. 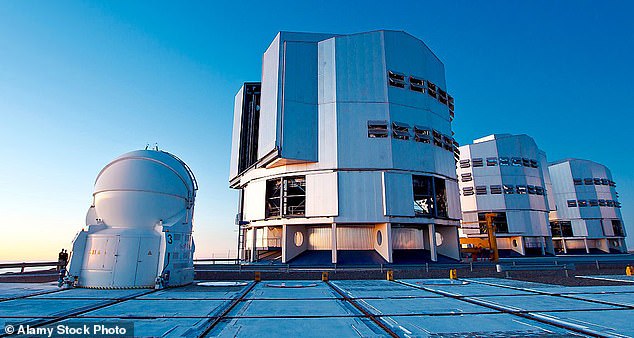 The giant telescopes at Chile’s Paranal Observatory. A solar eclipse will travel through part of Chile and Argentina on July 2

On July 2, a solar eclipse will travel through part of Chile and Argentina. Intrepid Travel has a 11-day tour to Chile with eclipse expert Dr John Mason. Starting in Santiago, there’s time to explore Atacama and its salt flats before visiting the aptly named Very Large Telescope (VLT) at Paranal Observatory. The trip culminates in visiting the Elqui valley, near La Serena, on July 2, which is in the totality path.

Getting there: From £2,350pp including all excursions, accommodation and various meals, domestic flights and entry charges, but not international flights (intrepidtravel.com).

The Canary Islands have a big astronomy culture thanks to a combination of clear skies, observatories you can visit – and on July 16-17 there’s a partial lunar eclipse. If you head up the mountains of La Palma, Roque de Los Muchachos Observatory, at an altitude of 8,000ft, is home to the largest optical telescope in the world.

Getting there: From £639pp all-inclusive for a week at La Palma & Teneguia Princess Vital & Fitness with First Choice on July 11 (firstchoice.com). 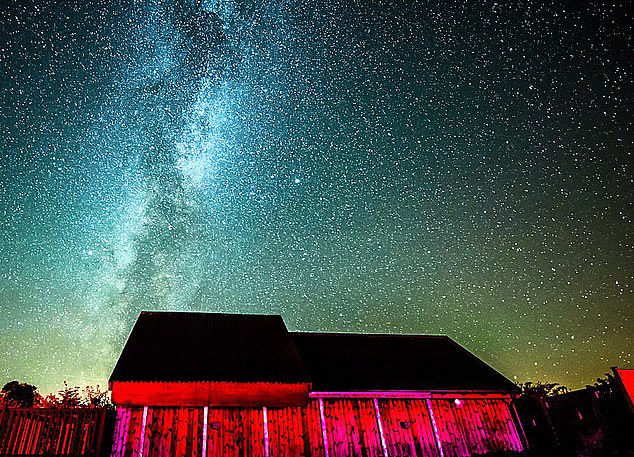 Stunning: The night sky at the Battlesteads Hotel in Northumberland on the edge of Kielder Water & Forest Park

On the edge of the Kielder Water & Forest Park, Battlesteads, a hotel near the village of Wark, has its own observatory in the grounds. Run by AstroVentures (astro.ventures), it has nightly events and talks, starting from £22.50. Get into star-gazing and you can also visit Kielder Observatory (kielderobservatory.org). A good time is between July 23 and August 20, when the Perseid meteor showers are most visible.

Getting there: Double rooms at Battlesteads start from £70 a night, which includes breakfast (battlesteads.com).

On Boxing Day this year, Oman will experience a partial solar eclipse. Leaving on December 21, Explore’s seven-night Arabian Sands Eclipse will head into the Wahiba Sands with an expert astronomer on hand to answer questions.

If you don’t just want to stare at the skies, guests can also take a boat trip on a dhow, visit the city of Muscat and drive through the Hajar mountains to the 17th Century fort at Nizwa.

Getting there: From £2,795pp with flights, B&B accommodation and transfers with Explore (explore.co.uk). 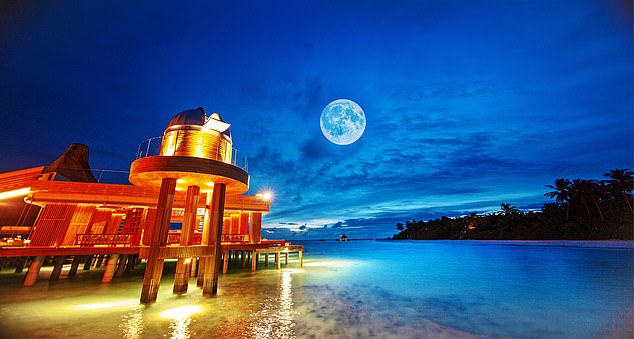 Maldives Magic: The observatory at the Anantara Kihavah resort, which has a resident astronomer

Anantara Kihavah resort has a resident astronomer and an overwater observatory housing the most powerful telescope, a 16in Meade LX200, in this part of the Indian Ocean. The Maldives are just above the Equator, which means that both hemisphere’s stars are visible on clear nights.

Getting there: Seven nights from £3,769pp, with flights, seaplane transfers and half-board accommodation, with Destinology. A star-gazing session starts at £200 per couple (destinology.co.uk).

July 20 marks the 50th anniversary of the Apollo 11 mission and Neil Armstrong’s first steps on the moon.

In Houston, the Johnson Space Center is heading back to the 1960s. The famous Mission Control room has been returned to its polyester and clunky tech heyday and opened to the public. 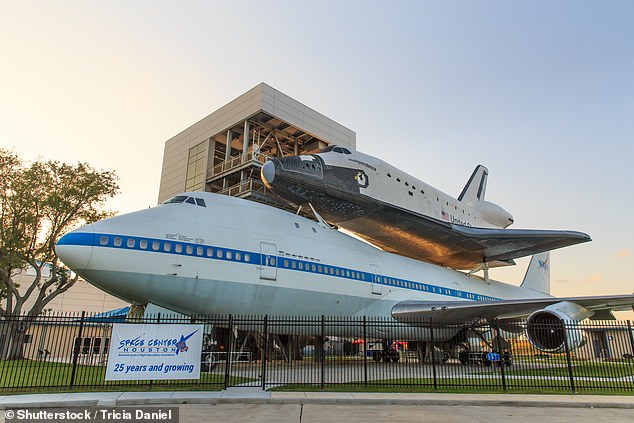 In July, there will be a raft of celebrations at the Johnson Space Center in Houston to mark the 50th anniversary of Neil Armstrong’s first steps on the moon

July sees a raft of events, and to commemorate the landing, there’s a special party with music to match the era (spacecenter.org/apollo-50/apollo-anniversary-celebration).

Until September 2, the Museum of Flight in Seattle is also hosting a big Smithsonian exhibition with Armstrong’s suit, plus the Apollo 11 space module and other items (airandspace.si.edu/exhibitions/destination-moon).

Here in the UK, the Royal Museums Greenwich is marking the 50th anniversary of Apollo 11 with the Moon exhibition, which includes the Snoopy Cap Communications Carrier worn by astronaut Buzz Aldrin during the mission, lunar samples and meteorites, and the Hasselblad camera used on the Apollo programmes as well as artworks by Turner and Constable (rmg.co.uk/whats-on/moon-exhibition).

The Most Christmas-y Towns in All 50 States