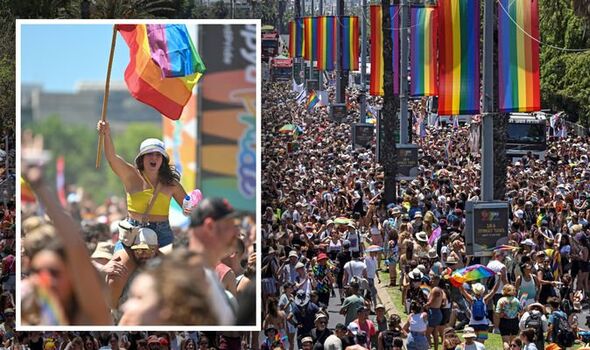 Tel Aviv Pride first took place in 1979, with LGBTQ+ rights in Israel considered to be the most developed in the Middle East. The key event this year, which took place on June 10, was the Pride Parade which attracted over 170,000 people, and I was lucky enough to attend. As of June 2019, it is the largest LGBTQ+ Parade in Asia.

Travelling around the capital of Israel was so inspiring, especially to see the old towns such as Jaffa.

I was excited to tour the Flee Market, the ancient port city, and walk along the picturesque alleyways in Tel Aviv.

The market was a great place to find souvenirs such as date honey, a local delicacy in Israel, incredible spices and gorgeous jewellery boutiques.

In keeping with the Pride theme of the trip, we organised a unique tour of Little Tel Aviv Hostel, in the Bialik Square.

This is a safe space for LGBTQ+ people who have been evicted from their homes and need a place of refuge where they can meet other people from similar circumstances.

The highlight of the holiday was undoubtedly the Pride parade.

Despite gay marriage still being prohibited in Israel, and basic rights such as gay adoption only being legal in the country since 2008, the Pride parade attracted over 170,000 people.

We boarded the Pride floats in the 34 degrees Celsius heat and the mood was electric.

It was a mind-blowing experience that culminated with a performance by Dana International, the transgender Israeli champion of Eurovision from 1998.

This was so much fun and was so exciting to meet everyone there at the parade.

We were lucky enough to spend nearly an entire day at the Pride Beach by Hilton Bay. It was decorated with rainbow flags, had a sensational bar and was the perfect place to feel safe and relax.

Another highlight of the holiday was a trip to Jerusalem to see the Wailing Wall and other religious tourist sites.

In the Jewish Quarter, we visited the Wailing Wall and got permission from our tour guide Nachson Gal to write a prayer note and stick it in one of the cracks on the wall.

The experience was very moving, calming and zen-like.

As we crossed into the Muslim Quarter, we walked along the Stations of the Cross which led us into the Christian Quarter.

The Church of the Holy Sepulchre is where Christians believe that Jesus Christ was crucified – and we got a tour of the church, which again was a very emotive experience.

On the drive back to our hotel we stopped at the picturesque Arab village of Abu Gush where we had a farewell dinner at Naura Restaurant.

We were treated to chicken shawarma, humous and pitta and polenta which was absolutely delicious.

This holiday was very enlightening and moving for many reasons, and was an unforgettable experience.

Exciting new festival for the home of Halloween ·

Exploration cruising spreading beyond the poles