15-17 May
With a view of Skiddaw from your tent, the 13th Keswick Mountain Festival makes the most of its Lake District setting and combines outdoor activities with live music and talks. Festivalgoers may not spend too long under canvas though, as the 2020 schedule includes the largest programme of activities yet, including 18 running, cycling, swimming, multi-sport and hiking events. There are 5K, 10K, 25K and 50K running trails plus a daily, timed 18-mile hike around Derwentwater – and another 16-mile route around Coledale peaks, with more than 1,200 metres of ascent. There are also sportives for cyclists (including juniors), triathlons, open-water aquathlons and family fell trail puzzles and obstacle courses. Taster activities are included in the ticket price and in previous years included tree-climbing, archery, Segways, slacklining and caving. Talks feature wilderness hiker, writer and presenter Cameron McNeish, and Paul Tierney discussing his new record for running up all 214 Wainwrights (Lake District fells over 1,000 feet). Details of live music are still to be announced – Cast, KT Tunstall, and Bez have played in previous years.
• From £75 adult, £45 child, £195 family of four including camping (less without camping), larger sporting event entries from £13, keswickmountainfestival.co.uk 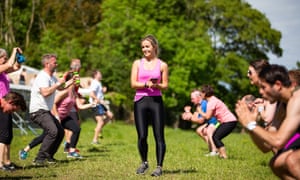 “Ever left a festival feeling better than when you arrived?” asks the Big Retreat. This family-friendly festival in the Pembrokeshire Coast national park has a huge array of classes and workshops for health-conscious festivalgoers, including clubbercise, crossfit, roller-skiing, kickboxing, salsa, wild swimming, triathlon training, Nordic walking and paddleboarding. Mr Motivator and the Dirty Vegan will be there, and you can try several types of yoga, from vinyasa and yin, to aerial and acro, plus gong baths and mediation. The eclectic bill also includes art sessions, bushcraft, cookery demos, talks around wellness and happiness, massage, comedy, and there’s a lineup of live music to be announced.
• From £179 adult, 6-17s £50, under 5s free, family £430 (camping £20 a pitch). thebigretreatwales.co.uk

Top of the Gorge, Somerset 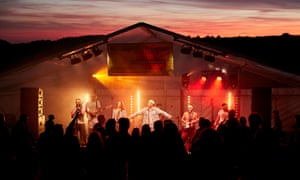 In a meadow above Cheddar Gorge, this National Trust-run festival makes the most of the beautiful trails, crags and caves of the Mendip Hills. With views to the Somerset coast and into the gorge, the site is the perfect backdrop to a weekend of outdoor pursuits, including mountain biking, trail running, climbing, stargazing, forest bathing and yoga. There will be talks from experts in exploration and wildlife conservation, including expedition runner Anna McNuff (who recently ran the length of Britain barefoot), record-holding trail runners Nicky Spinks and Damian Hall, author Adharanand Finn and paraclimber Anoushé Husain; plus rock and folk music from the Leylines, Brother Sea, The Adventures Of…, and more.
• Adults £59, children £22, family £140 including camping (bell tents £230), day tickets from £10 adult, £6 child, nationaltrust.org.uk 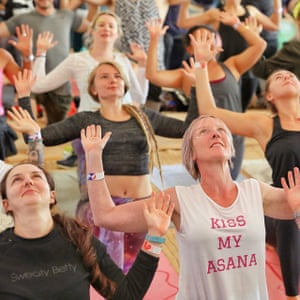 This festival combines yoga and holistic therapies with music and lots of glitter, in lakeside pastures close to Elmore village. Yogi leaders on the bill so far include Stewart Gilchrist, Anna Forrest and Fierce Grace’s Michele Pernetta. Alongside yoga sessions – including Bikram, kids’ yoga and a yoga disco – wellness activities include mediation, pole-fitness and dance, plus a spa with massage, reiki, open fires, hot tubs and a sauna. New this year is an immersive breathwork pod with psychedelic visuals and sound, and a tipi for talks from authors and wellness experts. After dark the party gets going with DJs (past names include Goldie, Norman Jay, Maxi Jazz from Faithless, and Nemone) plus burlesque classes and workshops on astral projection and lucid dreaming. There will also be live sets from the Dutty Moonshine Big Band, Chainska Brassika and Emily Laing among others, along with banquets, bottomless brunches, and a demo kitchen with guest chefs.
• From £175 (camping pass £25 extra), 15 years and under admitted free with parent or guardian, day tickets from £79, soulcircus.yoga 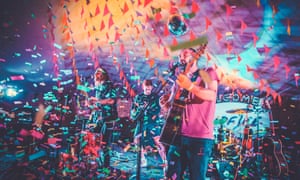 In a secluded forest in West Kingsdown in Sevenoaks, Camp Wildfire is a summer scout-style camp for adults – and a joyous weekend to round-off the festival season. Embrace playtime and adventure by day – with quad biking, zorbing, flying trapeze, paddleboarding, tree-climbing, archery, raft and shelter building – followed by parties at night with DJs and live music (including DJ Yoda, Craig Charles, Horse Meat Disco and Norman Jay in previous years). There’s a wide range of activities on offer, from calligraphy to astronomy, beekeeping to swing dance, apothecary to campfire bread-baking, and radio station presenting to tie dye. Prefer to rave first thing? The Morning Gloryville dance club offers refreshing beats at 8am, or take some time out with wood-fired hot tubs, yoga and mindfulness.
• From £235, tickets on sale soon, campwildfire.co.uk

Which national parks are open during the federal government shutdown?

Wexford mid-week goes down a storm