Talks on the Channel tunnel project are to be held next month by the British and French Governments. This was stated at a press conference in London yesterday by M. René Massigli, former French Ambassador to Britain and chairman of the French Channel Tunnel Study Group.

His disclosure came after Mr L. F. A. d’Erlanger, chairman of the Channel Tunnel Company, had said that he believed talks on the project between civil servants would take place very soon. “The French Government has now declared itself in favour of a permanent link,” he said, but our Government is a little bit shy.”

No longer an island: when the Channel Tunnel opened – May 1994

Mr A. B. B. Valentine, chairman of London Transport Executive and a member of the BTC, who presided, said that the commission had already described the proposal to build a railway tunnel under the English Channel as a sound venture. The commission was not in favour of the proposed Channel bridge project. The commission is one of the principal shareholders in the Channel Tunnel Company, having held 25 per cent of the equity since the foundation of the company in 1881.

Mr d’Erlanger said that the bridge project would cost twice as much as the tunnel – £210 millions against £105 millions. Revenues would be inadequate to make the bridge a commercial proposition. On the bridge sponsors’ own figures, it would provide an effective yield of less than 3 per cent for the first 12 years. Money could not be raised on international markets on such a basis as this. 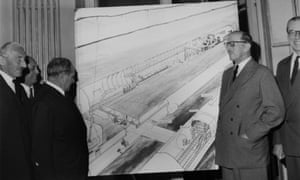 Both tunnel and bridge would have a capacity far in excess of any demand this century. All the road vehicles which crossed the Channel by sea and air could be cleared through the tunnel in three or four days. The speed of crossing by tunnel would be no less rapid than by bridge; the high speed of the railway on which cars would be carried on double-deck wagons and buses and lorries on single-deck wagons would offset the short time spent in loading and unloading. Terminals would be sited to drain off traffic well short of the congested coastal areas, where as a bridge would only intensify this inconvenience.

The charge for the average family saloon with driver would be £5 16s and, with two other occupants, £7 13s. This compares with £10 16s by sea or £18 9s by air at current rates for a car and three occupants.

The tunnel would take five years to build and would need only 3,000 workers. Mr d’Erlanger said that shareholders could expect an average return of 10 per cent on their investment over 20 years.

All of the best travel, hotel and holiday deals in the Click Frenzy Mayhem sales