In winter, it rests at the waterfront, where its enormous steel bow – painted a distinctive hue known as “international orange” – provides a photo-friendly backdrop to the Dark Mofo Winter Feast. In summer, it embarks for Antarctica, carrying scientists and supplies on multiple voyages across the Southern Ocean to the Australian Antarctic Division’s four research stations.

Whether you’re a Hobart local or simply an occasional visitor to the city, the RSV Aurora Australis icebreaker will be a familiar sight.

The upcoming summer season, which begins in late October, will be the Aurora’s last. Thirty years after sliding down the slipways at Carrington in New South Wales, it will be retired from service – replaced by a multi-million-dollar vessel currently in the final stages of construction in Romania.

To find a name for the new icebreaker, the Australian Government invited schoolchildren across the country to submit their suggestions. The eventual winner – Nuyina, which is the palawa kani word for the southern lights – has been welcomed as a wholly appropriate choice. Not only does it acknowledge the longstanding connection between Tasmanian Aboriginal people and the southern lights, it also continues the naming tradition that was begun back in 1911 when Sir Douglas Mawson set out for Antarctica aboard the steam yacht SY Aurora, and has been most recently held by the much-loved Aurora Australis. 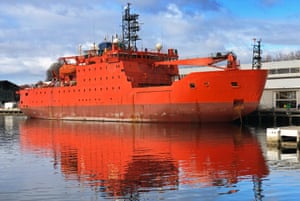 By all measures, the RSV Nuyina will be an improvement. It has larger fuel and cargo capacity than the Aurora, is fitted with state-of-the-art scientific equipment, and will have significantly greater icebreaking capability.

But humans – even those who tend towards reason and hard data – can develop strong emotional attachments to ships, and there is a distinct sense of nostalgia around the Aurora’s final season.

Professor Matt King, head of geography and spatial sciences at the University of Tasmania, made just a single voyage on the Aurora, as a PhD student in 1998, but the experience has stuck with him.

“I was seasick from the moment we left the Derwent River until we arrived in the sea ice four days later. Aside from one brief, over-optimistic appearance in the mess, I stayed in my bunk, fed grated apple by a kind colleague. Once we got to the sea ice and the ocean flattened out, it was an entirely different experience – the icebergs, penguins and whales were incredible. For some of the time I had the job of estimating iceberg dimensions from the bridge. But otherwise it was amazing sightseeing and taking photos.”

Dreaming of Antarctica: where beauty and fragility meet

Other researchers, such as Associate Professor Patti Virtue from the Institute of Marine and Antarctic Studies, have made multiple voyages on the Aurora Australis. “I’m not even sure how many,” she laughs. “It must be around 10. Most of those have been long summer voyages for krill research and oceanographic work, but two were winter voyages, which are logistically much harder.”

Since her first voyage in 1992, Virtue has witnessed significant social and cultural shifts onboard the Aurora. While she admits there are still a few regrets among expeditioners about the removal of the ship’s onboard bar, known as the Husky Bar, there have also been some positive changes.

“There’s much better gender balance. The first time I went on a voyage there were only three women and about 60 men, but now it’s much closer to 50-50. And at my first medical, the doctor looked at me – I was very small and slender – and said ‘you’re not going on a pleasure cruise, you know …’”

But it’s not just scientists who have braved the shared berths of the Aurora. Since the early 1980s, the Australian Antarctic Division has awarded an annual Arts Fellowship, enabling people from the creative industries to experience Antarctica.

Recipients have included Australian Children’s Laureate Alison Lester, who wrote and illustrated the picture book Sophie Scott Goes South based on her experiences; composer and conductor Gordon Hamilton whose symphony Far South, featuring field recordings of ice, ocean and whales, will be premiered jointly by the Tasmanian and Melbourne Symphony Orchestras and the London Mozart Players in March 2020; and writer Favel Parrett, who voyaged to Casey Station in 2012 and used her time on the Aurora to inform her 2014 novel When the Night Comes.

Parrett understands the new ship is a marked improvement, but she says the Aurora Australis is a “work-horse that has kept thousands of passengers and crew safe. I grew to love her and her crew while I sailed with her – and I am very sad I won’t get another chance to walk her decks.” 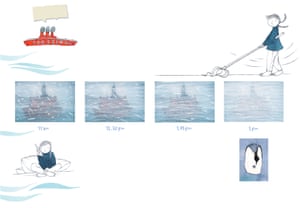 The Australian Antarctic Division has confirmed that when the RSV Nuyina begins service, the Arts Fellowship program will continue. What is less certain is the future of the Aurora Australis itself. While the vessel will be forever associated with the work of the AAD, it is owned and operated by P&O Maritime. Beyond 2020, the fate of the ship lies with them, and as yet there has been no confirmation of what that might be.

Many of the P&O crew have been with the Aurora for years. Gerry O’Doherty is the Chief Mate and Master – the man with ultimate command and responsibility for the vessel – having worked his way up the ranks from the position of Integrated Rating (IR), where he began basic maintenance and lookout duties 20 years ago.

“I think everybody’s apprehensive. We’re all very attached to the ship and to the work it does. The ship is like a second home, and the people are like a second family. Saying goodbye to that will be difficult. It’s like our own micro-community sometimes, with people from all over the world. It’s a tiny melting pot of humanity isolated in the Southern Ocean.”

This is crunch point for our oceans: let’s do the right thing | Gillian Anderson

Marine biologist and former deputy voyage leader Sarah Laverick, who has travelled on the Aurora Australis four times, understands that sense of community better than most. On her second voyage, she met the man who later became her husband, and earlier this year published Through Fire and Ice (Pan Macmillan Australia) a non-fiction book that tells many of the stories from the Aurora’s 30-year history.

Through Fire and Ice focuses on the more dramatic moments in the vessel’s history, including two onboard fires, a grounding near Mawson station, and a role in the rescue of the Russian ship MV Akademik Shokalskiy.

In the book’s introduction, Laverick acknowledges that everyone associated with the ship has their own favourite story – whether that’s a first-timer experiencing the King Neptune ceremony (an initiation rite for people crossing 60 degrees south for the first time, which usually requires kissing a fish), a galley chef working through the 1000kg of potatoes required for each voyage, or an experienced expeditioner winning the onboard first iceberg sweep.

“I’ve got so many special memories,” says Laverick. “Seeing a group of orcas surface with a calf was amazing. So was seeing an aurora australis from the Aurora Australis – standing on the deck watching the sky with lots of other people. It’s hard to pick just one though. It’s everything. The Aurora is far more than the sum of her parts.”

Girl, 14, falls to her death at Arizona’s Horseshoe Bend lookout

The Best Secluded Beaches in the U.S.

Embark on an Epic Odyssey with Latitude 33 ·

Organisers of Expo 2020 will meet via video conference on Monday to consider a delay to the event. According to reports from the Middle East, a year-long postponement is one…
Recent Posts
We and our partners use cookies on this site to improve our service, perform analytics, personalize advertising, measure advertising performance, and remember website preferences.Ok