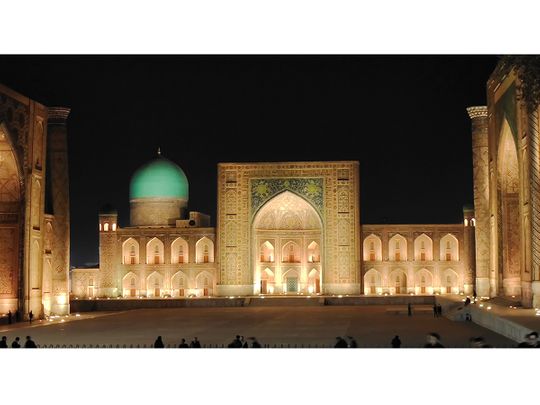 Ever since I read the historical novel, Raiders from the North, by Alex Rutherford, I always held a desire to visit Fergana in eastern Uzbekistan, the land of great Mughal emperor Babur who was crowned at the age of 12, and discover more about the rich cultural heritage of this magnificent country.

We are avid travellers and due to the current pandemic could not think of any other destination than The Republic of Uzbekistan, which has reported very few Covid cases. So, it was time to buckle up and fly to Tashkent, which is visa free for UAE residents.

Uzbekistan has a wealth of historical monuments, not least the towns of Bukhara, Khiva and Samarkand, which were the capitals of powerful kingdoms for many centuries. Shimmering minarets, curvaceous domes and mesmerising mosaics make the Uzbek cities of Samarkand and Bukhara grand.

Learn from mistakes and so did we and would suggest travellers about the MUST online booking of Afrosiyob Train [Bullet train] in advance or at the station prior to your journey as it is difficult to get tickets on the same day of travel. The only option left for us was to travel for six exhaustive hours to Bukhara in a normal train, Sharq but all the struggle and the tiredness paid off as soon as we stepped into the Silk route city Bukhara.

The Historic Centre of Bukhara, situated on the Silk Roads, is more than two thousand years old. It is one of the best examples of well-preserved Islamic cities of Central Asia of the 10th to 17th centuries. Important monuments that survive from early times include the famous Ismail Samanai tomb, Poi-Kalyan minaret, The Ulugbek medresseh, the Lyabi-Khauz ensemble, the Kosh Medresseh and the Gaukushon medresseh to name a few.

A lively atmosphere with tourists and locals makes night life in the city more enchanting. The Arc of Bukhara is another marvel of architecture and history, while the Water Tower Shukhova, built by a talented mathematician and brilliant engineer is also worth visiting. The best thing about Bukhara is that all the hotspots can be covered on foot.

Our next destination was Samarkand, which was covered by bullet train. One of the oldest cities in the world, Samarkand was founded around the 7th century BC. Poets and historians described the city as The Pearl of the Eastern Muslim World. Timur wasn’t only a great conqueror but also a great builder. He’s the man behind the greatest constructions in Samarkand, including the Bibi Khanym Mosque, Shah-i-Zinda, the Ulugh Beg madrasah at Registan, the Ulug Beg Observatory, and the Gur-e-Amir mausoleum.

All the main roads of Samarkand lead to Registan, one of the most beautiful squares of the world. It was used as a public square for royal proclamations, celebrations, and public executions. Our first glance of the awe-inspiring monument complex was at twilight. We just could not take our eyes off the stunning and enigmatic architectural marvel.

Our journey came to an end at Tashkent where I wanted to explore the Chimgan mountains, the ski resort and Charvak lake by car. The austere open chair car ride from Beldersoy to the snow-capped Chimgan mountains was thrilling and captivating.

The republic of Uzbekistan is least explored by travellers, but I highly recommend this country as a lifetime experience not only for its cultural and architectural glory but for its friendly, humble, and helpful people. Any visit to a country is incomplete without trying out its food delicacies, so be sure to taste the shashliks, herbs and other salads, variety of soups, lepyoshka bread, tandyr nan, patyr nan, pilaf and last but not the least local tea and coffee. Moreover in this Covid era, it is a hassle-free exercise to get all important documents be it PCR, air tickets and immigration formalities in Uzbekistan. All medical centres deliver PCR reports within six hours. Hotels, food and other amenities are reasonably priced.

With fond, cherishable and warm memories, we hereby end our Uzbekistan diary.

Move over Berlin – This city has Europe’s coolest club scene

Fascinating ghost towns around the world